Abbey Road Studio Two, known to many as the Beatles’ Studio, has played host to some of the most revered recordings ever made. And now it’s the stage for Spitfire Audio’s latest string library. 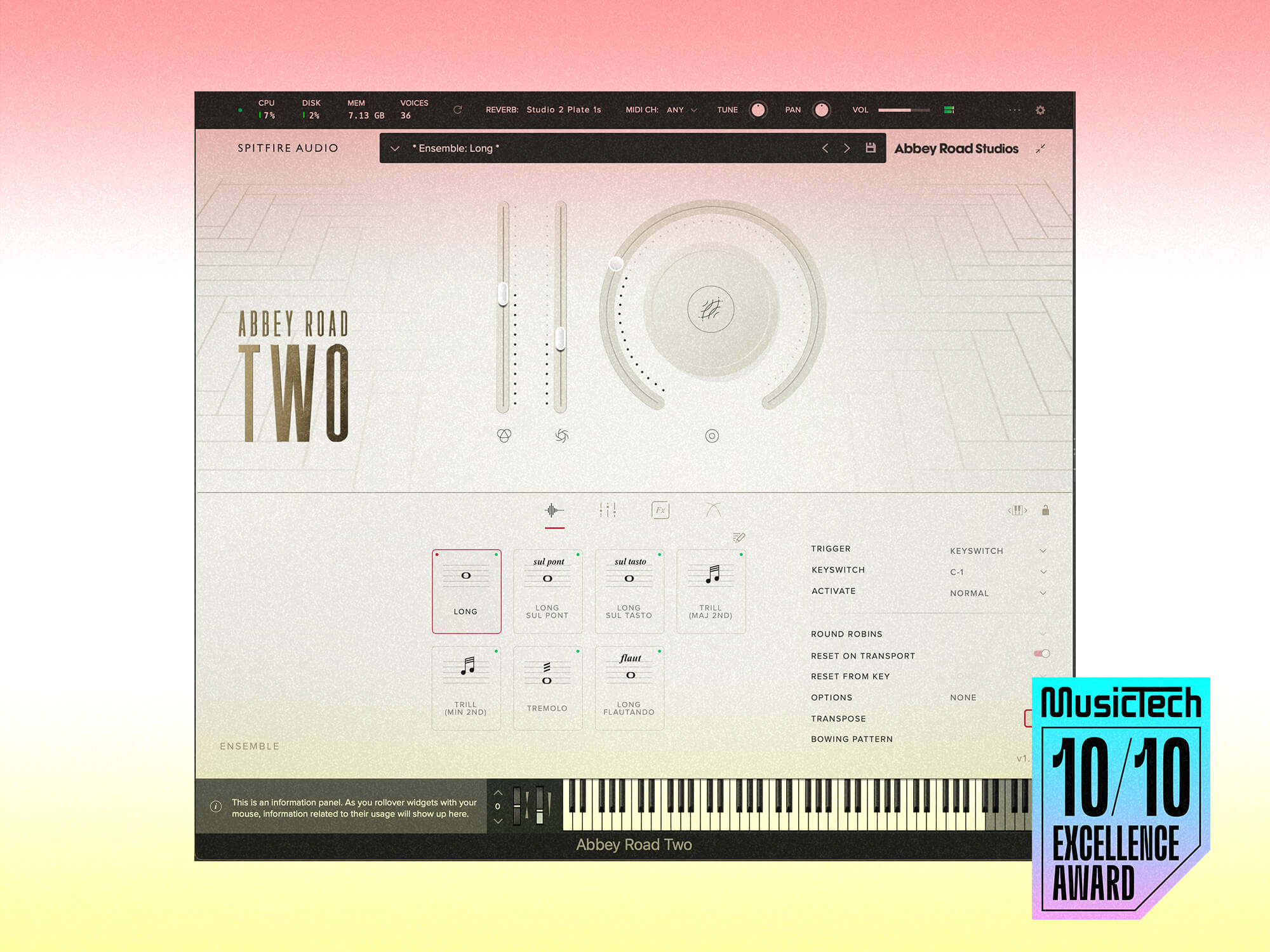 ⊖ Can be memory-intensive if you’re working in-depth with all five instruments
⊖ More strident violin articulations can be a touch harsh around 2.5kHz


Spitfire Audio’s Abbey Road One collection from 2021 provides a chance to program virtual large ensemble orchestral sessions, awash with the acoustics of one of the most famous large recording rooms in the world. But under the same roof of Abbey Road Studios’ Studio One lies Studio Two, arguably an even more hallowed space.

Now, Abbey Road Two: Iconic Strings libraries brings the room’s sound to your fingertips, offering five of London’s top session players playing separately, and together, to let you compose and arrange with that sound. We’re taking a look at the Professional version of the library, which provides access to a vast array of microphone options and a broader collection of articulations compared to the Core edition.

Often referred to as The Beatles Studio, the smaller room (and yet by no means small) in Abbey Road Studio has been elevated by the string arrangement recording for 1966’s Eleanor Rigby. As the preferred recording room for much of the Fab Four’s songbook, its sound is now firmly familiar to the hearts and minds of millions of listeners. Countless other luminaries have flocked there, too – Adele, Oasis, Little Simz, Pink Floyd, and many more.

Favoured particularly for much smaller ensemble recordings, there’s a unique quality in the relationship between the room’s acoustics, intimacy, microphone collection, outboard gear and the players drawn to that space which has written itself, inextricably, into recorded history’s folklore.

Abbey Road Two is a dedicated Spitfire Audio instrument, rather than one hosted in Kontakt, much like the brand’s recent large-scale releases. Upon loading, the first patch is perhaps the one you’d expect: an Ensemble group of all five players (Violin 1, Violin 2, Viola, Cello and Double Bass) playing a short Spiccato articulation with instruments mapped across the keyboard range, immediately letting you tap into your inner Beatle and play Eleanor Rigby.

You can select Articulations at the top of the interface, with Ensemble patches offering all of the string voices across the keyboard, set to each instrument’s key range. This works in tandem with the new Spitfire Arranger, which lets you deliberately limit a key range for each voice of the quintet. These can either be hard-fixed to low and high notes per voice or can benefit from Multi-Voice, an enveloping-style function.

Multi-Voice lets you set a volume fade-in across notes in the lower key range and a fade-out to the upper range, crossfading voices more musically as you play up and down the keyboard. It’s neat and enables you to quickly produce an arrangement for a full ensemble before splitting it out for each voice to benefit from its own dedicated instrument. When that time comes, each string instrument is given a group of individual patches to cover articulations.

All-in-One offers every possible articulation under one roof, but if you’d prefer to limit choices to just short or long variations, those patches are available, too. Spitfire Audio’s Performance Legato playing styles are front and centre, with velocity controlling portamento speed between notes, while modulation is mapped to dynamic layers and Expression to output volume, making for some amazingly playable performances.

The Legato options have been refined within Abbey Road Two, with additional choices presented via Slurred legato and Portamento legato options. These provide alternative ways to control nuances between note transitions. Otherwise, articulations include non-portamento Longs, Sul Point and Sul Tasto patches (playing on the bridge for scratchier sounds, or over the fingerboard for more mellow, sonorous tones); Harmonics, Trills, Tremolos, Flautando (playing with fewer hairs of the bow for an airier tone), Spiccatissimo, Spiccato, Staccato, Pizzicato and Marcato shorts. Plus, there are some wonderful poised Brushed sounds, which hold for just a moment before fading.

In the Pro Edition of Abbey Road Two, this richness of playing styles is matched by a similarly generous collection of microphone choices. These are arranged with access to individual microphone arrays, or to four Mixes, where mics have been blended into two contemporary mixes and two Vintage ones.

The Vintage 1 mix is a recreation of the signal chain used for the Eleanor Rigby session: Abbey Road’s REDD desk, with parallel dynamics control from the RS124 compressor, feeding a signal to a J37 tape machine. Rather than a traditional Decca Tree arrangement, alternative microphones include both M50 and Chandler REDD.47 microphones in a left/centre/right formation, as well as Ribbon, spot Condenser, Ambient microphones and more.

Whilst the microphone options for the Core edition are more limited, they do provide the key mixes you’d hope for, including the Vintage 1 chain. Also included is a collection of reverbs from Abbey Road’s own plate reverbs. Whilst there are no additional controls for these beyond reverb amount, decay times are offered in half-second increments, so finding the right spatial choice for your mix is easy. 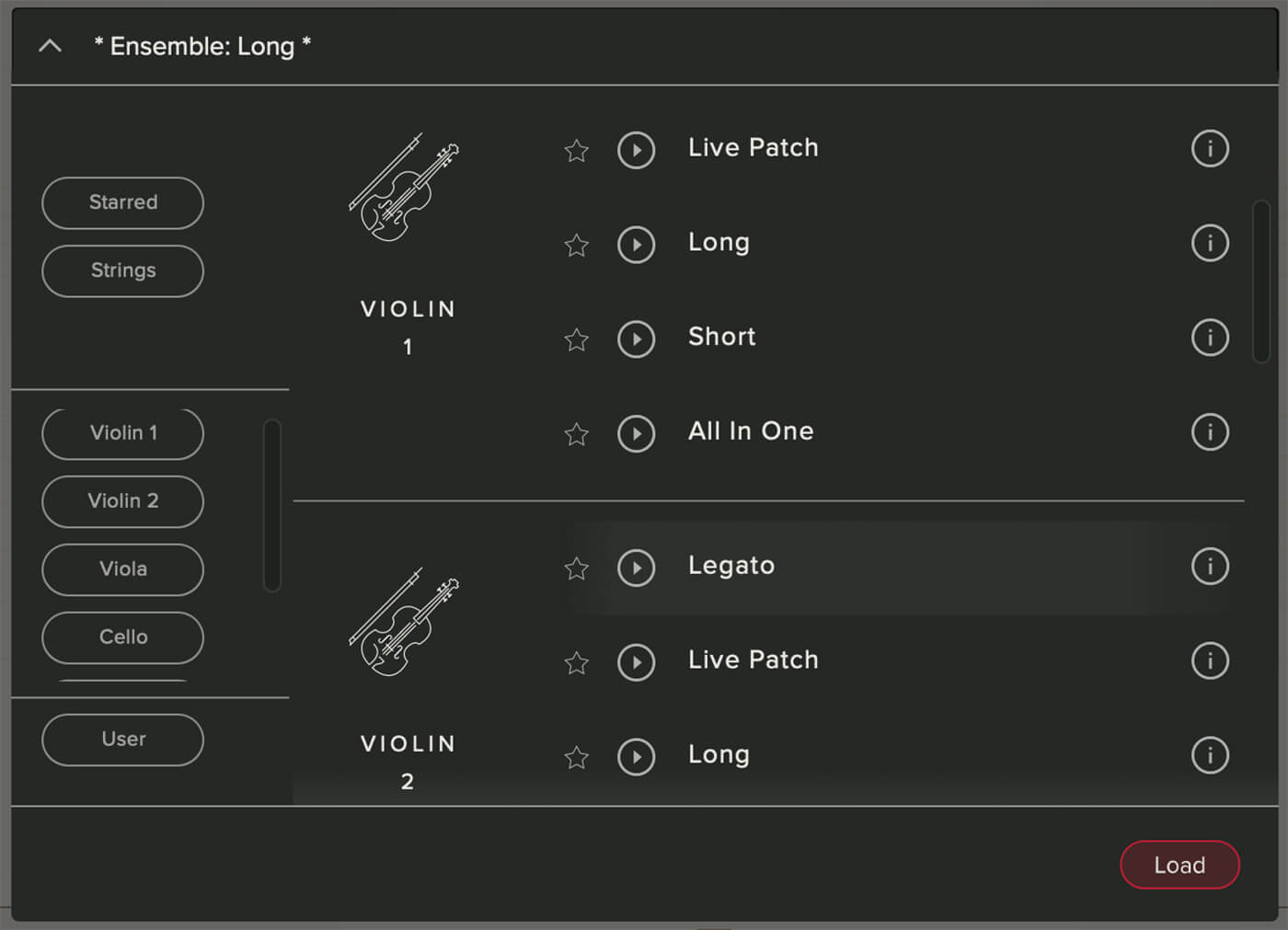 Audio history under your fingers

As you’ll hear from the audio demos and from the extensive walkthroughs on Spitfire Audio’s website, Abbey Road Two is a triumph. Rarely has a string library burst out of the speakers as this one does.

This author has been lucky enough to record strings in Abbey Road Two, and the sound of this library is packed with the qualities of that room. The Arranger is a fantastic addition, particularly in the early stages of composing and arranging, as is having built-in reverbs selectable from the top of the interface.

The overall feel of the patches is wide, warm and rich, but you can tame stereo width if you want. The microphone choices are lovingly selected and all offer full customisation in the Pro edition. You might have the impression that small string ensembles lack the richness and fullness of their symphonic equivalents but Abbey Road Two should help dispel any such belief. Yes, it’s a different sound entirely. But, in addition to fragility and poise, these instruments offer serious power. And when they’re pushed into louder, faster sequences, they spring to life with detail and nuance in every bow stroke.

Without question, this is the most exciting solo string collection of instruments this writer has played and, used in combination, theyoffer the sound of one of the most coveted recording spaces in virtual instrument form.