Software is getting cleverer, we all know that, but Sonnox’s latest plug-in takes on the nuanced detail of drum gating setup with such aplomb that you’d be forgiven for thinking it was self-aware. 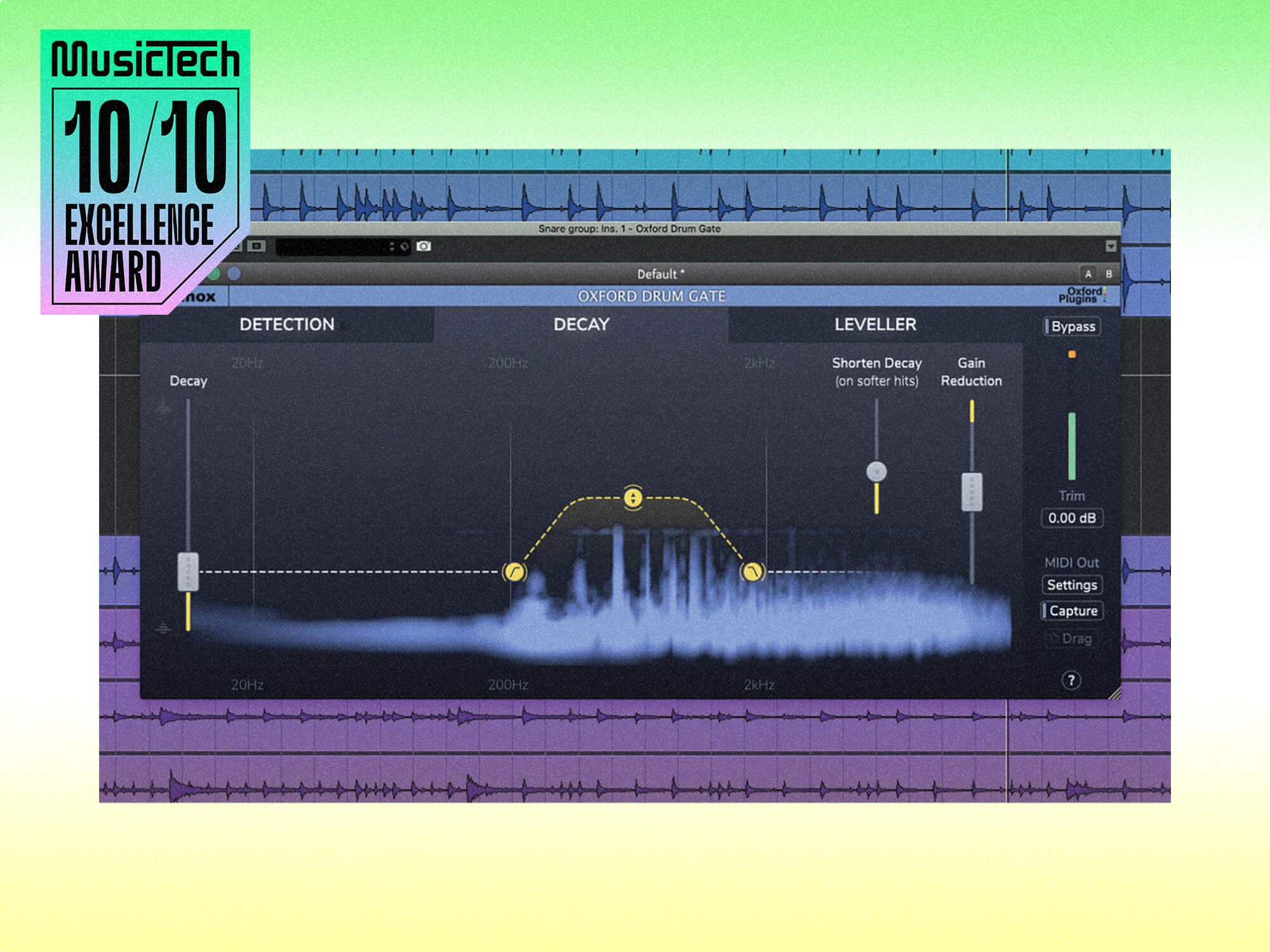 ⊖ This gate can’t stop sheep escaping from a field

Sonnox Oxford Drum Gate is an intelligent and adaptable gate processor that’s as easy to use as it is powerful, and that can save hours of painstaking gate setup work.

Much as I love building up rhythms and beats using a good drum sampler and pad controller, there’s nothing quite like the sound of a well-played live drum kit for groove, energy and spontaneity. Recording and mixing an acoustic kit is, however, one of those sound engineering challenges that really separates the pros from the tinkerers.

The most fundamental part of the challenge lies in how to mic-up such a large and complex – not to mention loud – sound source. There are techniques for using just two or three mics, but these rely on excellent live-room acoustics and spending an awful lot of time honing the position of those mics prior to recording. In any event, such approaches limit flexibility at mixdown time, hence why we normally surround the kit with microphones, capturing individual drums up-close along with various stereo pairs that capture the entire kit.

However, no matter how careful you are with your close mic positioning, there will always be significant spill between the individual drum mics, which is where the next challenge comes in, namely mixing all of those mic signals. This generally involves using gates on the individual drum tracks so that only the intended drum is heard via a track’s channel, and so that any EQ and other effects applied to the channel only impact the intended drum. This sort of gating can be agonisingly fiddly to set up, and often involves all sorts of additional audio editing and/or automation in order to get an accurate result. Aiming to make this laborious task easier, then, is Sonnox’s new Oxford Drum Gate, a plug-in dynamics processor for VST2, VST3, AU and AAX Native hosts.

Typically, a gate processor decides whether or not to open based entirely upon the measured signal level, but Oxford Drum Gate (or ODG as I’ll call it) is all about drums, and so adds to this basic recipe some rather clever detection capabilities. This not only makes ODG particularly sensitive to the transients created by drum hits, but allows it to tell the difference between kick, snare and tom hits as well. 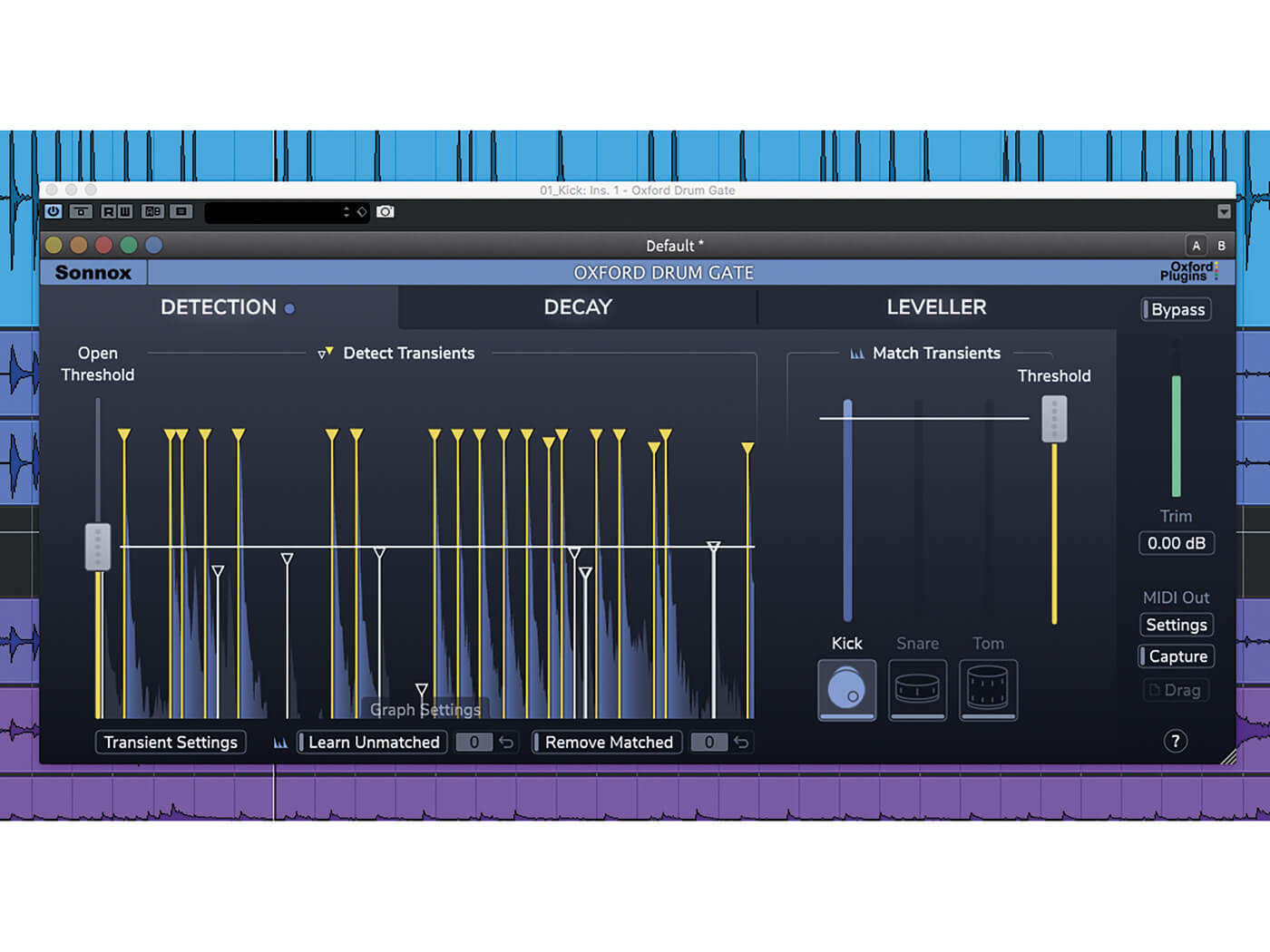 The plug-in window’s Detection view, where most time is spent, is dominated by a realtime rectified waveform readout overlaid by a line indicating the current gate threshold. All detected transients are marked on the waveform, whilst those areas of the waveform that trigger the gate to open are shaded blue.

The intelligent drum detection can be tweaked in a few different ways, primarily via the Match Transients controls positioned to the right of the waveform readout. Here a row of three buttons allow you to tell ODG which types of drum to detect (or ignore), and above each button is a corresponding level meter that indicates how likely it is that the currently sounding transient is of a particular type. Overlaying these meters is another moveable threshold marker that is used to define the meter level that has to be exceeded in order for ODG to consider the transient to be of a given drum type.

For example, a snare hit may create a blip on the snare meter and a smaller blip on the tom meter; setting the Match Transient threshold so that only the snare’s blip exceeds it ensures ODG will see that transient as a snare and not a tom. This can be particularly useful when you have a snare track that includes a lot of quiet incidental ghost notes in amongst the louder strikes, and where those ghost notes are at times quieter than the spill from other drums.

You can adjust the overall sensitivity of the detector as well as apply a high-pass filter to the side chain, and even if this doesn’t suffice, you can manually teach ODG which specific transients to open for and which to ignore. Whilst this manual mode is rather fiddly to set up, you rarely need to resort to it because ODG’s own decision making is generally spot-on, and even when it needs help that help is generally only needed on a handful of transients. 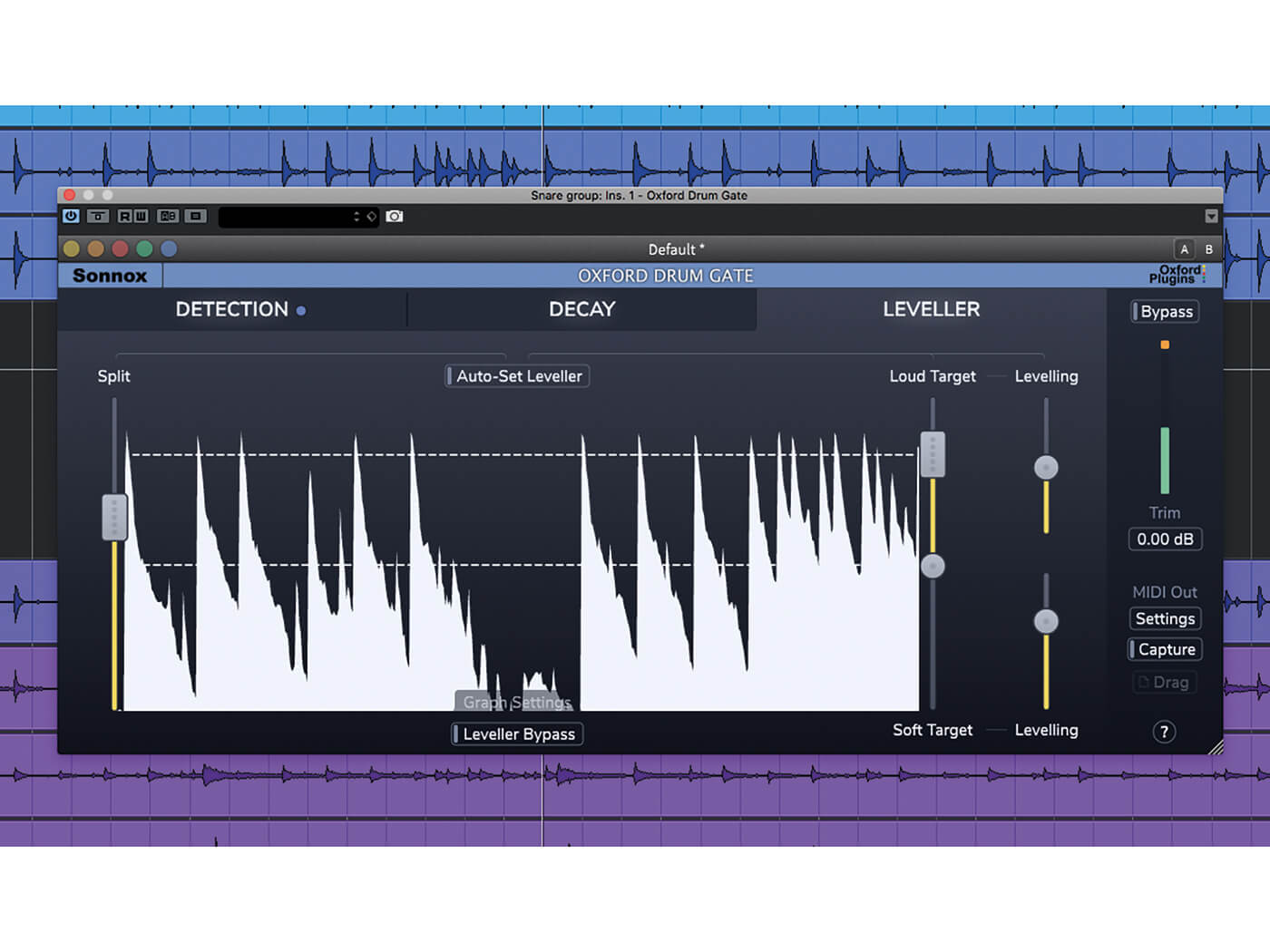 ODG is similarly discerning when it comes to working out when, and how rapidly, to close its gate. Switching to the plugin’s Decay tab opens a live spectrographic view of the sound being processed, with a simple frequency envelope overlay. The envelope defines the rate of decay at different frequencies, so you can – for example – let a tom’s resonance ring-out whilst simultaneously closing out lower frequency spill from the kick drum, and the spectrograph provides visual feedback that makes this a doddle to set up. There is also a master decay time adjuster, as well as a setting that reduces the decay time in response to quieter hits.

ODG’s third and final tab, Leveller, evens-out the dynamics of the gated signal, which is normally a job given over to a separate compressor. ODG’s Leveller isn’t a compressor, though, but rather an automatic volume control that operates on the gated signal, and that works in conjunction with the plug-in’s intelligent transient and drum detection algorithms. Using a simple set of three sliders you can adjust the volume of snare ghost hits without also impacting the loud hits, and vice versa, or you can make all hits sound at the same volume or be scaled to fall within a specific range of volumes. As with the rest of the plug-in, this potentially complex feature is wonderfully simple to configure and use. 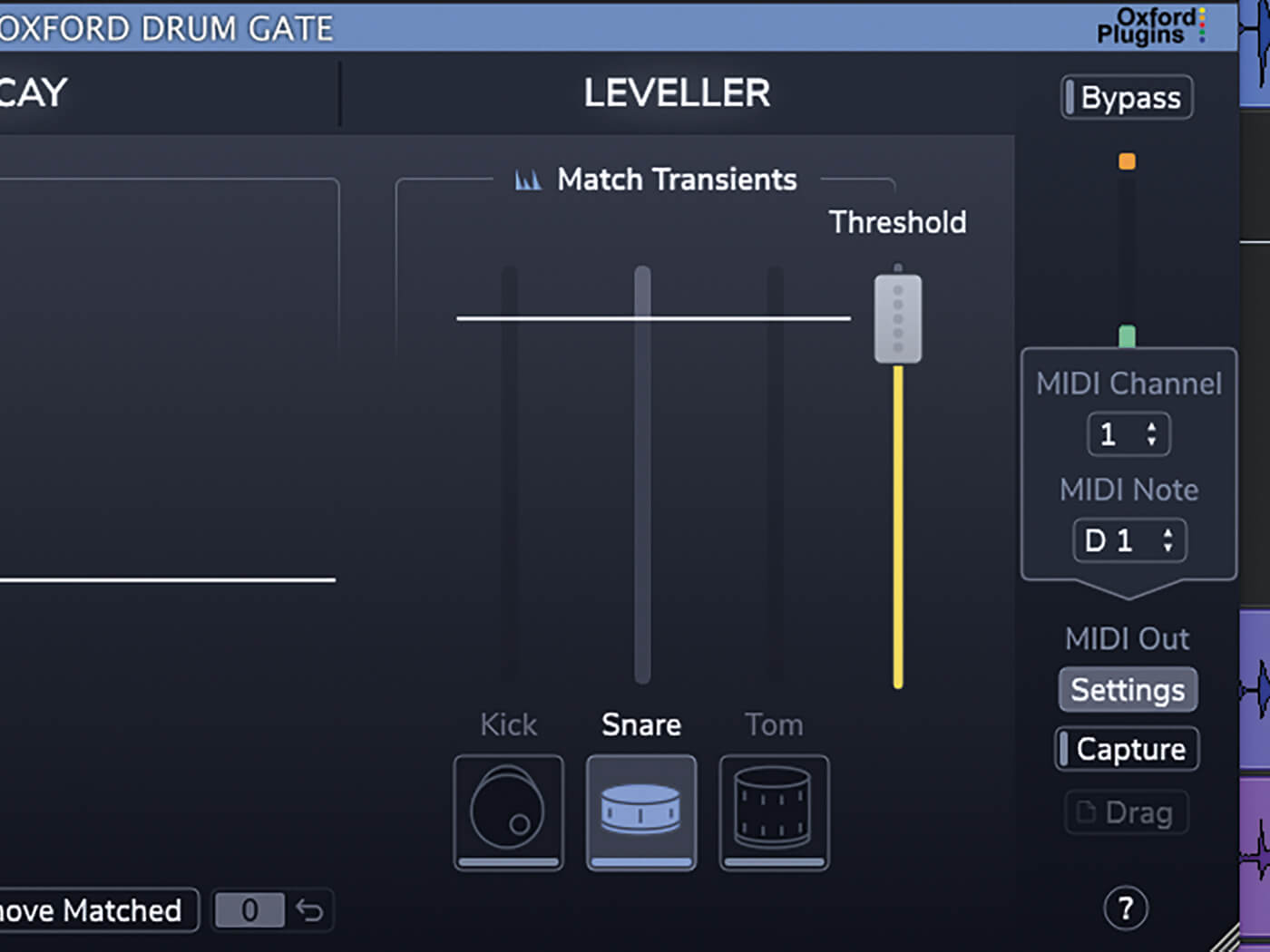 When used on live drum recordings, ODG is stupendously effective and takes all of the hard work out of gate setup. The intelligent features tend to just work, yet are easy to hone to the needs of even the trashiest of drum recordings. But the plug-in also has another little trick up its sleeve; it can convert drum hits into MIDI notes. This allows you to fortify a weak recorded sound, triggering sampled or synthesized overlays, or even to set up a complete drum replacement (with velocity sensitivity) in a matter of minutes. And because ODG’s detector is sufficiently precise to extract individual drum parts from pre-existing mixed loops and recordings, this feature even lets you convert such material into MIDI parts from where you can make modifications in ways not possible in the audio domain.

Most music-making involves drums and rhythms of some sort, and ODG can do clever things with most drum and rhythm recordings. So if you work with such material – and you probably do – you are going to want to check it out.

Oxford Drum Gate isn’t intended to be a general purpose noise gate, so if that’s what you’re after you should look elsewhere. But if you do a lot of recording work with live drum kits then you have to get Sonnox Oxford Drum Gate. Its £170 price tag may seem steep for something as prosaic as a gate, but if time is money (as the saying claims), then you’ll recoup the cost of your investment within a couple of recording sessions – it saves that much time.

The plug-in should also be considered by producers who do a lot of work with pre-recorded drum loops, who will find the plug-in’s ability to break down loops into various constituent parts, and to convert those parts to MIDI if required, to be a fabulous creative tool as well as a big time saver. 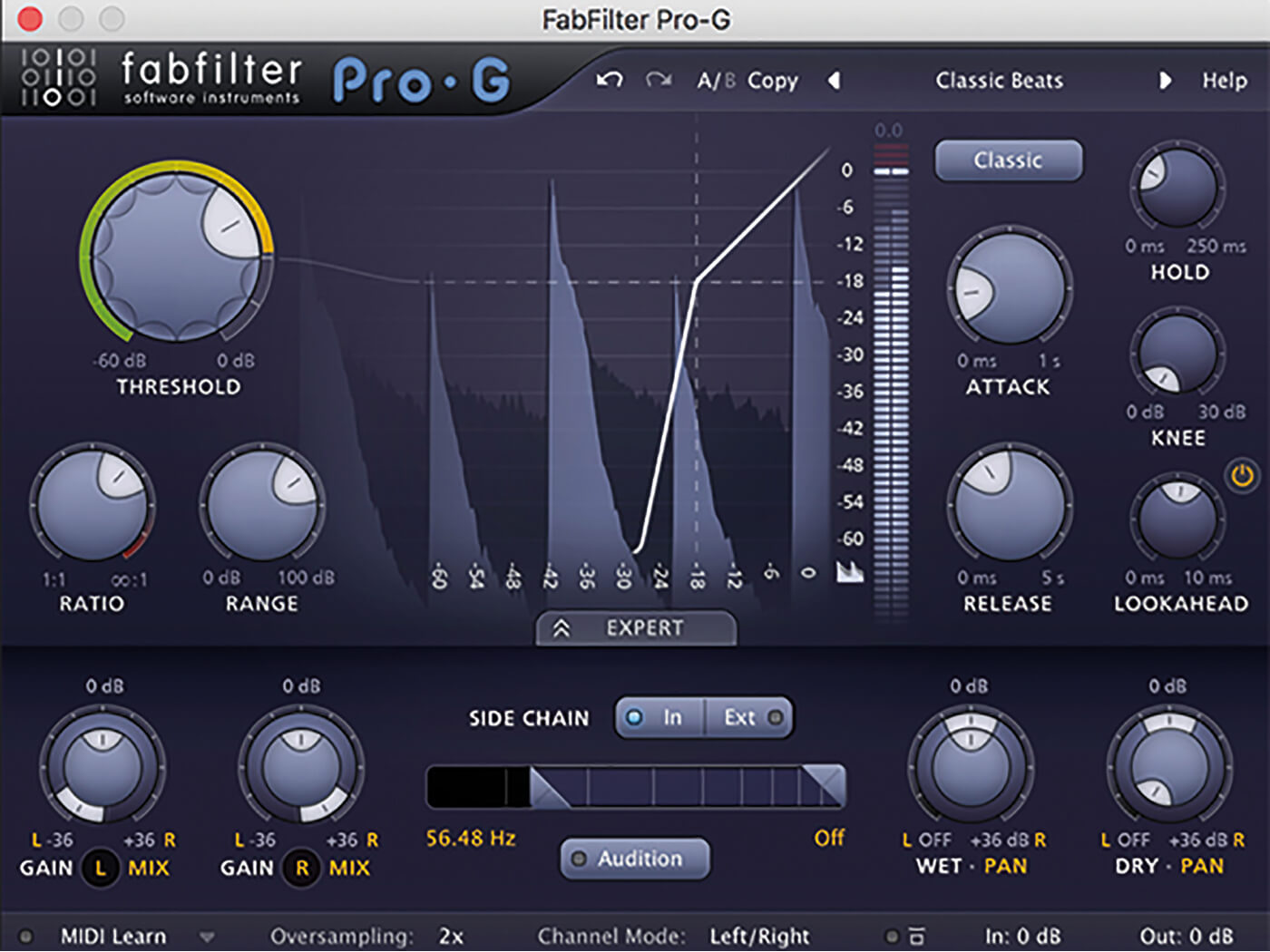 FabFilter’s Pro-G is a detailed and highly controllable gate plug-in with precise metering and flexible side chain controls, all wrapped up in an attractive and detailed user interface. One of its best features is that it can switch between mono, stereo and mid/side processing, making it ideal in a mastering rig. 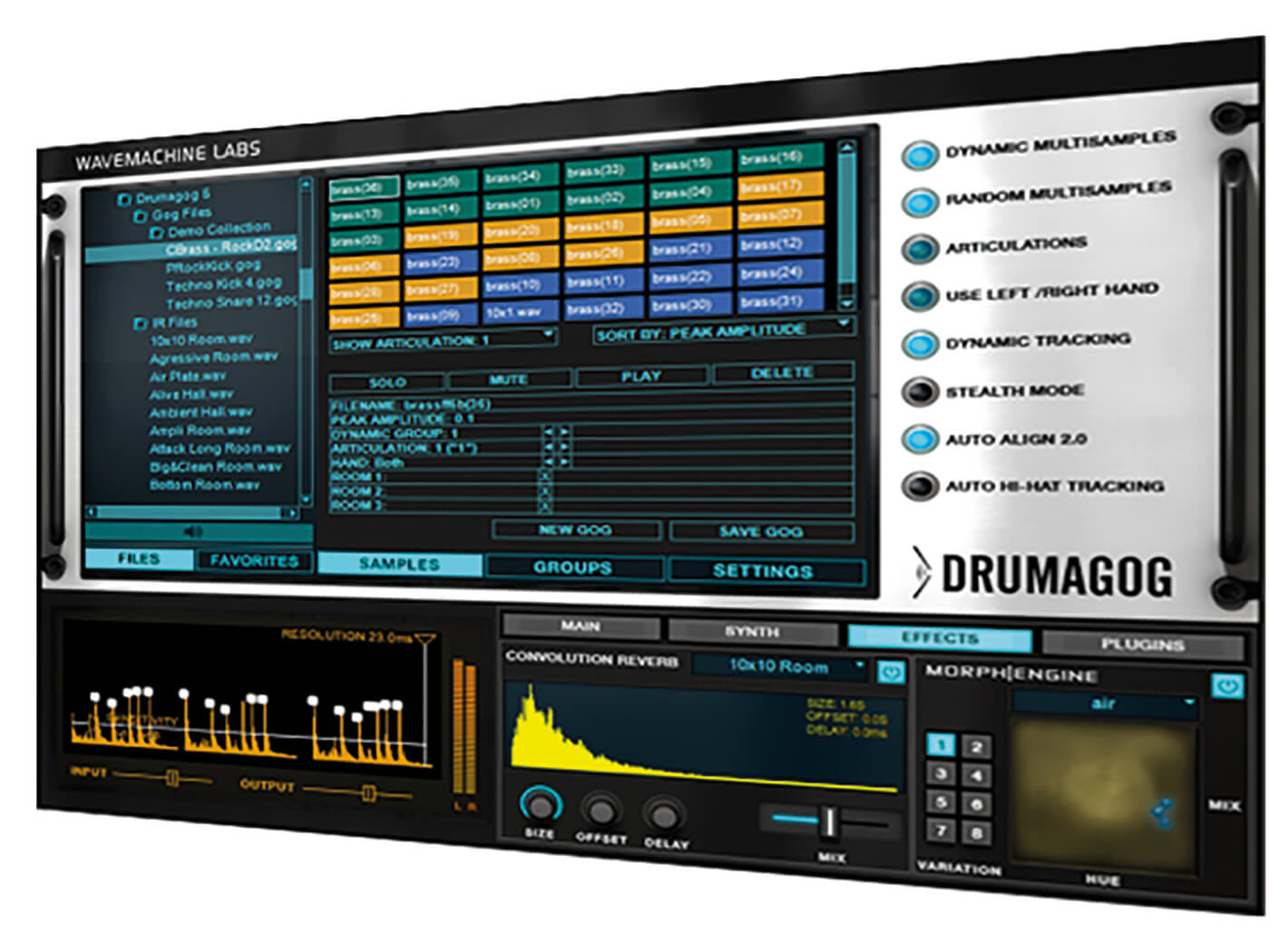 Drumagog has been a go-to plug-in for drum replacement for over 20 years. The latest version, Drumagog 5, supports all major host formats (VST, AU, AAX and RTAS), and provides a complete toolkit for replacing recorded drum sounds with your own choice of sampled alternatives.