Sonnox Claro review: EQ that evolves along with your project

Sick of getting lost down EQ-ing rabbit holes when all you’re trying to do is lay down a few tracks? Sonnox may just have the perfect solution. 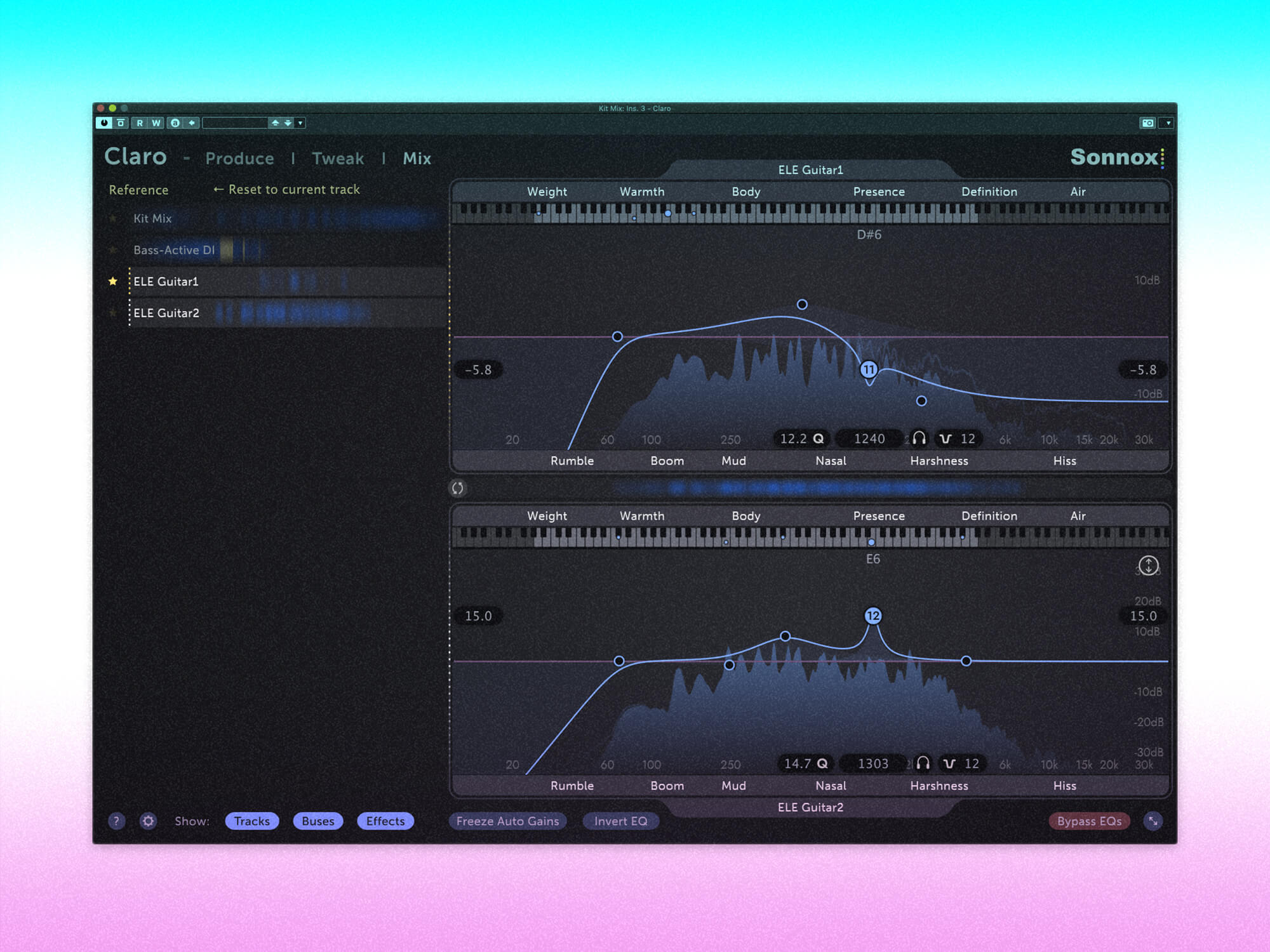 Claro’s design ensures you have the right EQing tools available at each stage of the production process, from track laying to mixdown.

When it comes to EQ, experienced producers know that diving into EQ settings during track laying distracts from the bigger picture, and is largely pointless because the ideal EQ settings can only be known at mixdown time. Sonnox knows this too, and has made it the central plank in Claro, their ingenious new EQ plug-in.

Claro splits itself into three views – Produce, Tweak and Mix – with each offering a greater amount of control and detail. The idea is that you use the Produce view while track laying, the Tweak view to refine the adjustments made in the Produce view, and the Mix view to make further adjustments within the context of the entire mix.

The Produce view is about as simple as an EQ can be. A strip at the top of Claro’s panel shows a real-time spectral intensity readout of the sound, which makes it easy to see which frequencies are particularly strong and energetic, and which are weaker. The strip includes labelling that shows both Hz values and user-friendly descriptions such as “Rumble”, “Mud” and “Air”. In this view, Claro offers just three bands of EQ plus high- and low-pass filters.

Handles overlaying the intensity readout are used to set the frequency of each band, while the amount of cut or boost for each band is controlled from three simple level controllers below. The high and low bands can be switched between peak and shelving modes. 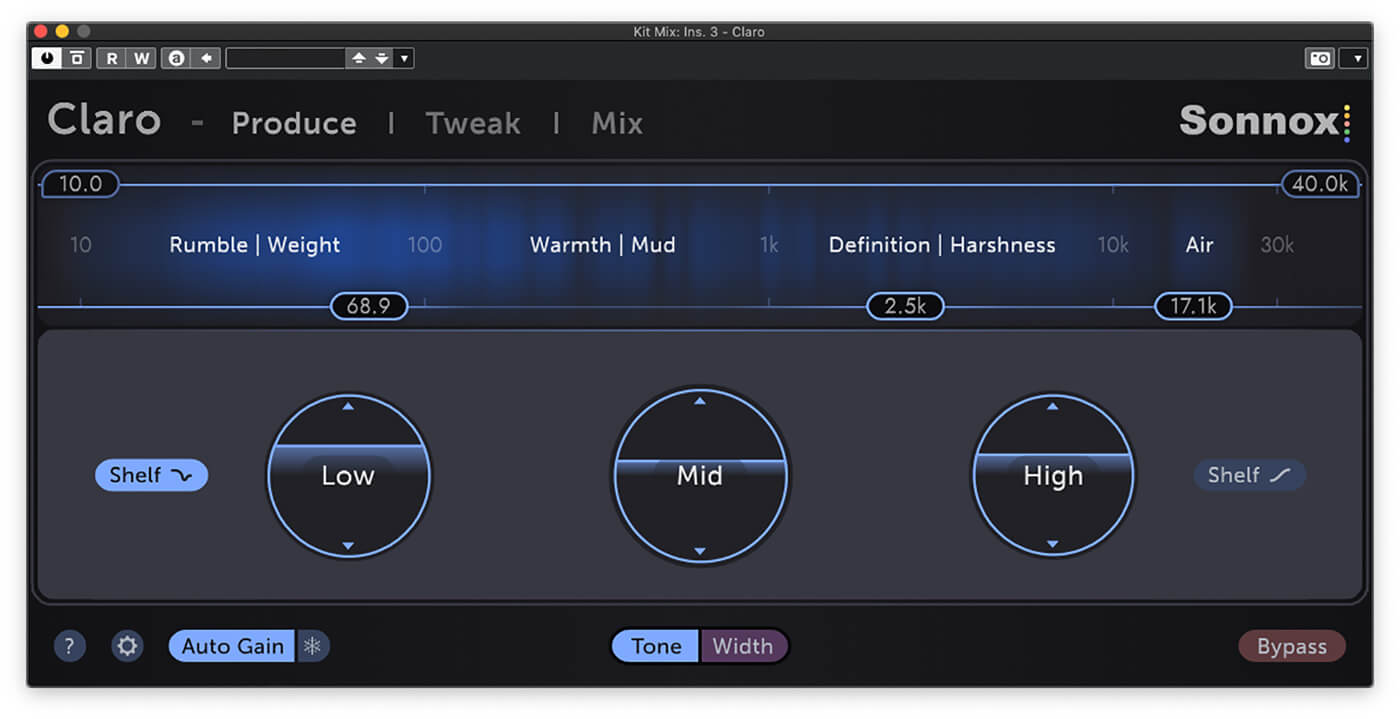 Claro has a second EQ curve that operates in the mid-side domain, and which becomes available when the plug-in is applied to a stereo track. This operates on the side band, in effect acting as a frequency-specific stereo width control. Colour coding makes it easy to know whether you’re working on the main EQ (blue) or the side band EQ (pink).

When the time comes that you need more detailed control, it’s time to switch to Claro’s Tweak view. This shows a much more conventional EQ interface, with curves overlaying a real-time spectrum analyser. The bands configured in Produce mode are shown on the curves, with handles and pop-up parameter fields for making further adjustments. You can also add up-to an additional 16 bands to the EQ curves for super fine-grained control.

Finally, there’s the Mix view. Here, the spectral intensity readout of every Claro instance is shown in a list, one of which you specify as the “reference” instance. As your mix plays, yellow marks are shown on the non-reference instances when and where they cause frequency masking with the reference instance. Miniaturised versions of the reference and selected instances’ Tweak views are shown to the right, so you can dive in and make EQ adjustments whilst seeing exactly what impact they have across your entire mix – and all within a single plug-in window. 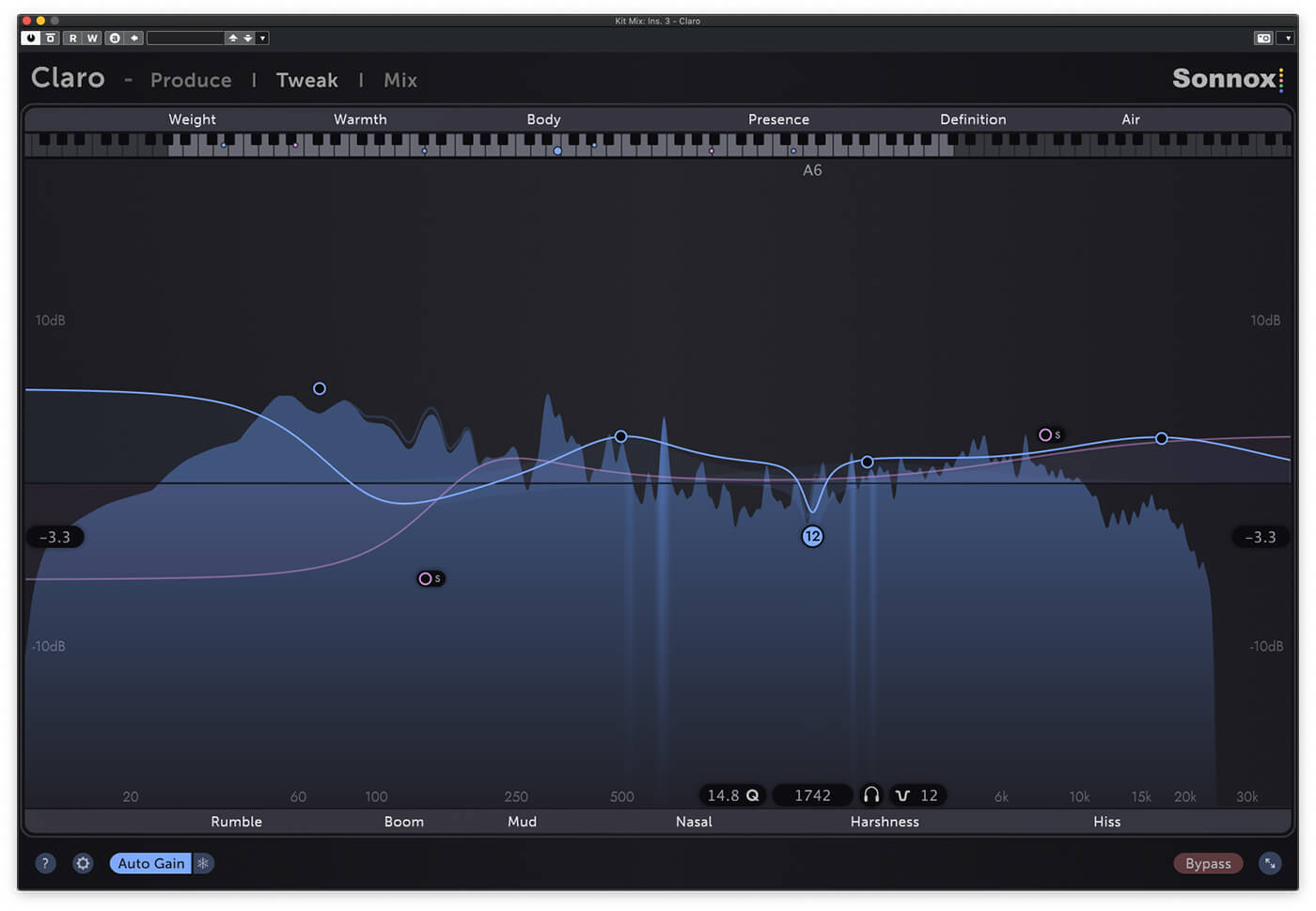 Claro’s processing is very clean and accurate, which is generally a good thing but may be off-putting to those who prefer their EQ with a bit of colour and character. The plug-in’s visual readouts are excellent, in particular the Mix page’s intensity readouts, which really highlight what’s going on throughout a mix so you know where to focus your attention. Perhaps most impressive, though, is the way Sonnox has captured an ideal EQ workflow and recreated it perfectly in plug-in form.