AI specialists Sonible return with a smart new take on reverb, ready to breathe new life into your mixes. 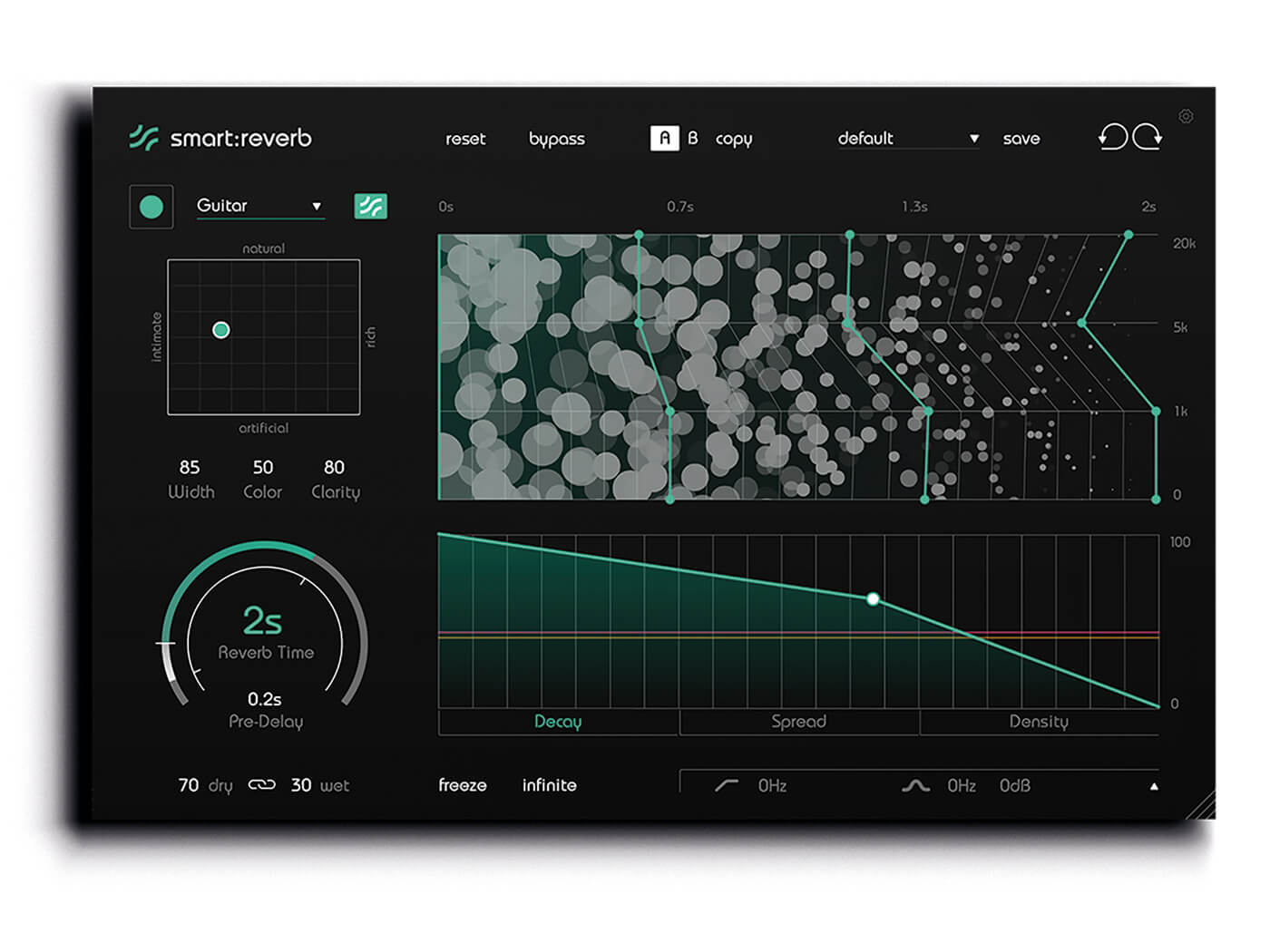 AI’s grip on modern plug-in design shows no signs of abating, with Austrian company Sonible now turning its attention towards reverb. Following on from its successful Smart:EQ 2 and Smart:Comp plug-ins, Sonible’s Smart:Reverb is a source-adaptive effect that listens to your audio and creates for it a custom-tailored preset that can be edited in great detail. But is this approach really as intelligent as the marketing suggests or is “artificial” the more operative word here?

One of the first things you’ll notice about Smart:Reverb is its lack of presets. For those used to firing up new plug-ins and flicking through patches to get a broad idea of what they’re capable of, this might seem unsettling. Fear not. This absence is at the core of what this plug-in is about: you don’t need pre-loaded presets when you can generate your own in seconds. Before we get to that though, we’d best begin by covering the main elements that you’ll be using to shape your reverb sounds: decay, spread and density. These can be found in the temporal shaper graph at the plug-in’s bottom right, each occupying its own tab. On the surface, these look a little like split-point envelopes, with time running from left to right, but here you’re limited to only two or three points to edit each line.

With decay, you can control the volume shape of your reverb’s tail. This allows you to create smooth and natural decays, sounds that fall sharply then release slowly over time, and sounds that duck before swelling back up again. This movement is displayed in real-time detail via the particle display above, with grey bubbles that alter in colour and size to indicate the distribution of energy over the time and frequency spectrum. With the decay tab selected, the particle display also shows a spectral shaper grid, which allows you to alter the decay times for the lows, low-mids, high-mids and high frequencies. It takes a little getting used to, as  Smart:Reverb treats decay differently to many other plug-ins. But it gives you enough control to shape the sound without overloading you with editing points. 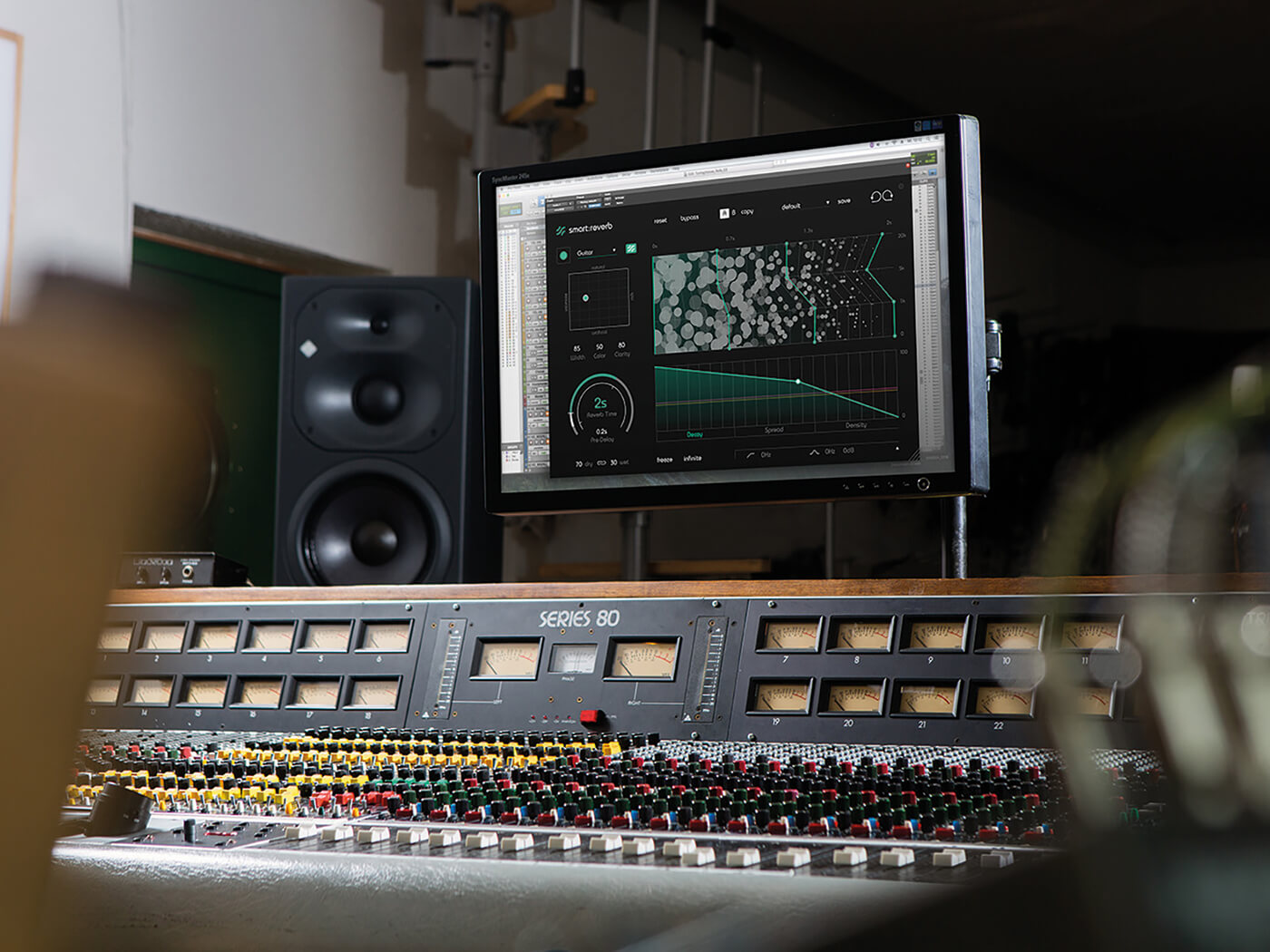 The next tab on the temporal shaper is for spread, which is easier to understand. Spread lets you choose whether the sound starts narrow or wide, and how it develops over time. With spread selected, the graph changes to give you a movable cutoff point so that any content below remains static. Finally, there’s the density tab, which lets you set the density of your reverb tails as they progress.

Aside from these elements, you also get standard controls for reverb time and pre-delay, dry and wet levels (with an option to proportionately link them), and a simple 2-band EQ with a selection of filter types for shaping the wet signal. Perhaps more interesting are the width control, which lets you limit or expand the perceived width, the colour control, with which you can give your reverbs a darker or brighter tone, and the clarity control, which cleverly unmasks the direct signal and makes your reverbs more transparent. The fantastic-sounding Freeze and Infinite buttons help expand the plug-in’s sound-design credentials too.

These are the fundamental controls that let you delve in and shape exactly how your reverbs sound. Of course, you could simply use these to build presets yourself but the unique selling point here is the AI preset builder. In the top left, there’s a drop-down menu from which you can select from drums, snare, guitar, keys, vocals and speech, or hit Universal if your audio doesn’t fall into one of these categories. From here, simply click the record button while playing material and, a few seconds later, you’ll have a tailored reverb preset.

You can quickly and dramatically tweak the preset’s sound using the X/Y pad, with Intimate, Rich, Natural and Artificial options. It’s essentially a macro control, offering an intuitive way to change several parameters at once, and can potentially keep you in flow without having to go too deep into editing. The reverb time is always set to the default 1.5 seconds, so you’ll need to set it yourself to best fit the mood you’re working with. 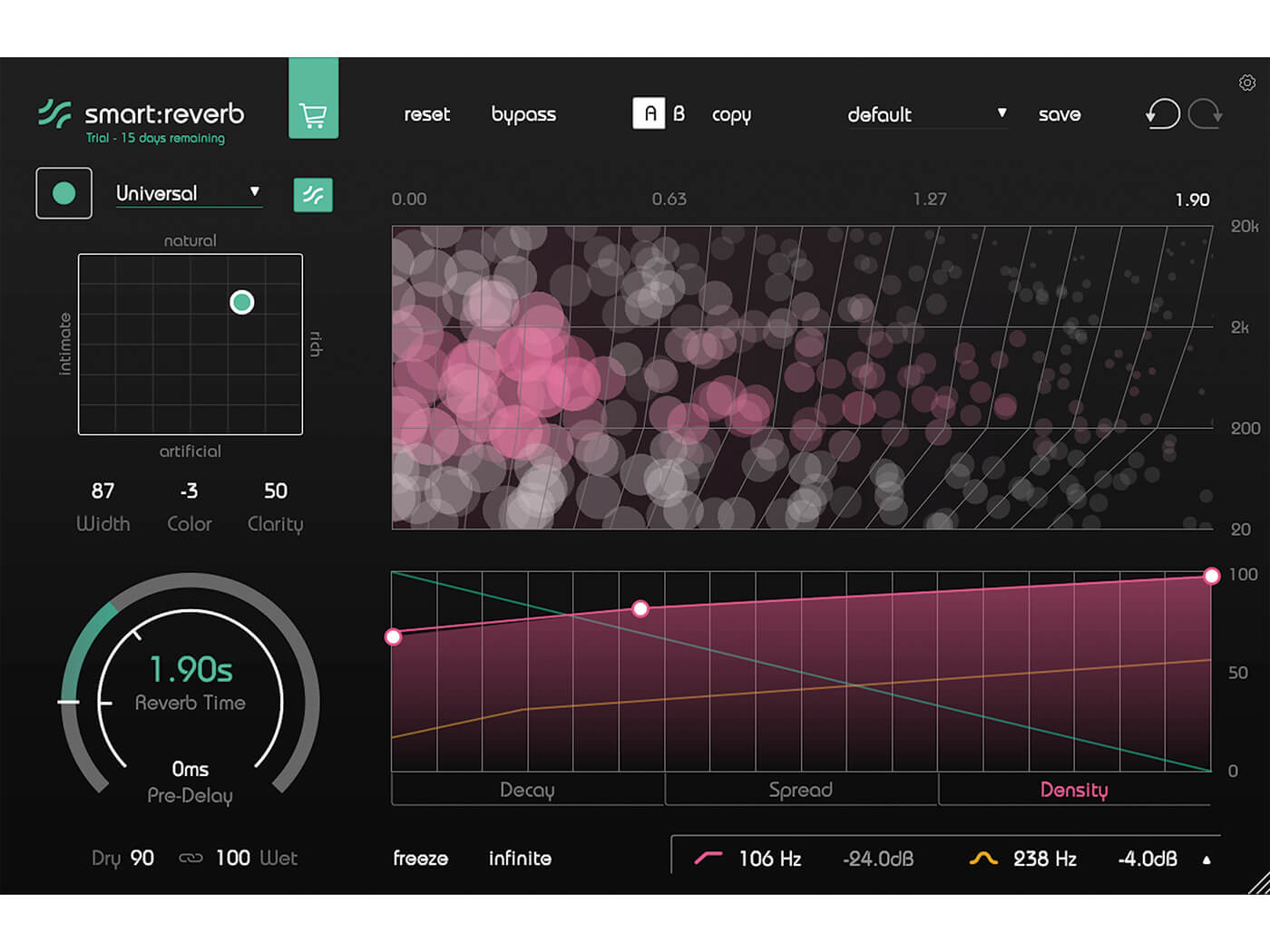 Drill down into the preset builder and you’ll see that the spread and density settings are fixed according to your instrument choice from the drop-down menu. Essentially, the AI here is setting the decay and the way the sound falls away at different frequencies based on the timbre of your audio.

Those hoping for a quick fix that will set reverbs across the mix may be disappointed, as this isn’t a set-and-forget plug-in. You’ll still need to think about your reverb length, pre-delay and overall tonality to get a successful sound. That’s not to say that the preset builder isn’t useful though, as the carefully selected decay characteristics can be helpful in creating transparent and smooth-sounding tails. In terms of using the plug-in in a mix, we find it especially effective for thickening sounds with shorter and more subtle tails, and giving them a place in the mix. We also enjoy pushing the decay shapes in weird ways to create swelling sound effects that dramatically alter the original source. However, we probably wouldn’t reach for this for the purpose of adding character to sounds, as it can’t compete with the detail you get from natural impulse responses and other more richly modulated algorithms.

If you tend to use one or two spaces to create homogenous mixes, the idea of placing a reverb plug-in on multiple instruments may send shivers down your spine. In practise though, if used subtly, multiple reverb presets can co-exist successfully in the same project.

Smart:Reverb is a well-designed plug-in with an intuitive and carefully thought-out set of parameters that give it a good balance of depth and usability. It might not provide perfect instant AI gratification but it can yield quick results and allow you to go deeper and edit the finer details yourself. Although the sound lacks some character, this is a solid bread-and-butter reverb that can help sounds sit transparently in the mix, and can turn its hand to experimental sound design too. 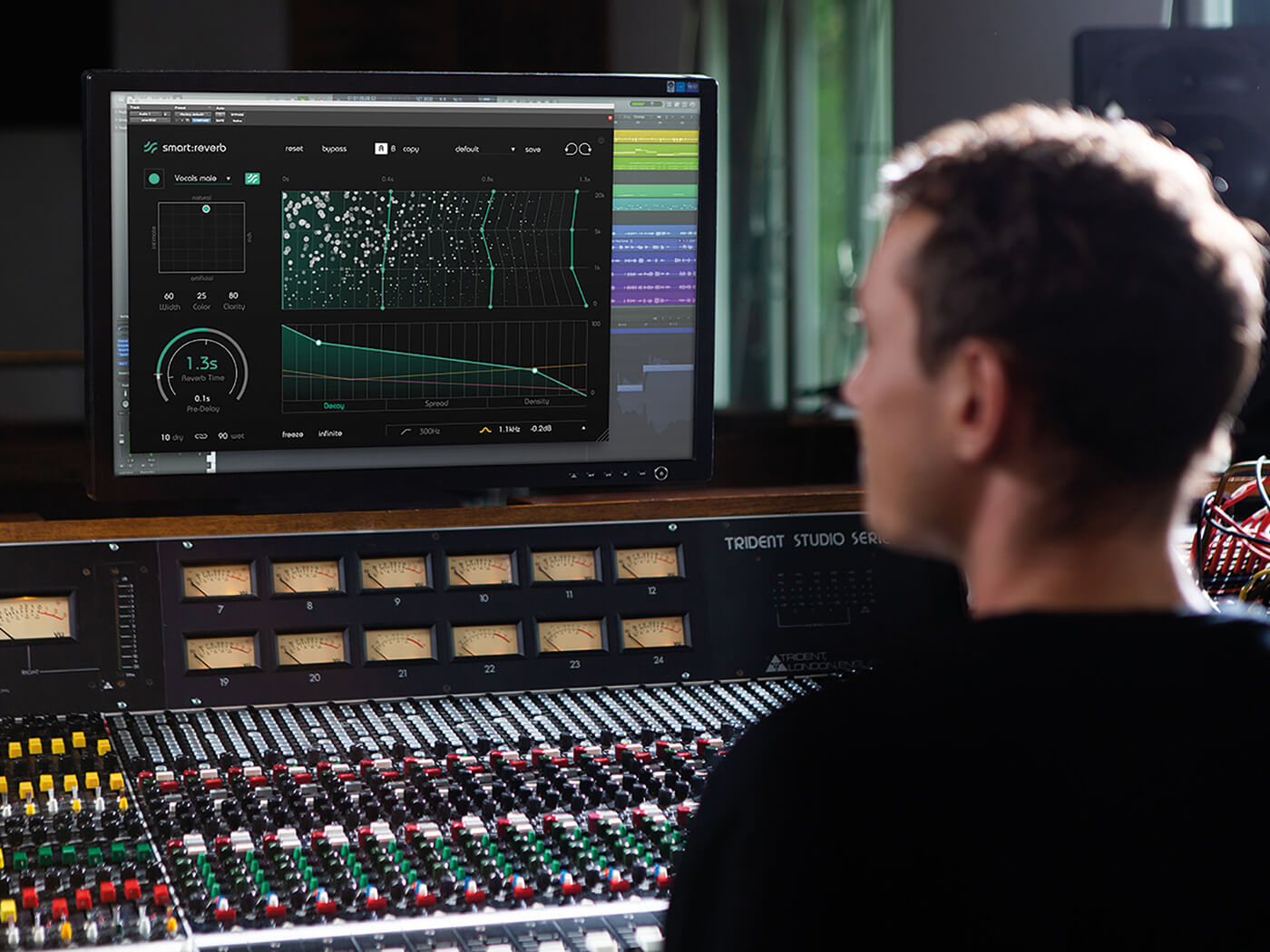 It’s likely that you already have several reverbs at your disposal, either native to your DAW or from previous purchases. As with many effects, it’s useful to have different flavours for different mixing tasks, although too many may overwhelm you. Smart:Reverb may not be the best-sounding or most versatile reverb we’ve ever heard but the way it’s presented is unique. It makes you feel like you’re really in control of the guts of the effect, while remaining quick and intuitive in all aspects of editing. If you find you’re unsure about how to set reverbs, the AI analysis is a sensible place to start, though you’ll likely need to tweak to get the best results. The temporal controls make it a robust sound-design tool too.

With a simplified set of controls including brightness, character and distance, plus a space control that fades between dozens of room models, Pro-R may lack Smart:Reverb’s AI but it has plenty to offer elsewhere.

This unique plug-in is powered by ray tracing, source separation and AI. It automatically adapts to the input audio to create butter-smooth and reflection-less tails. It’s expensive but it boasts some advanced pitch and harmonic filtering features.