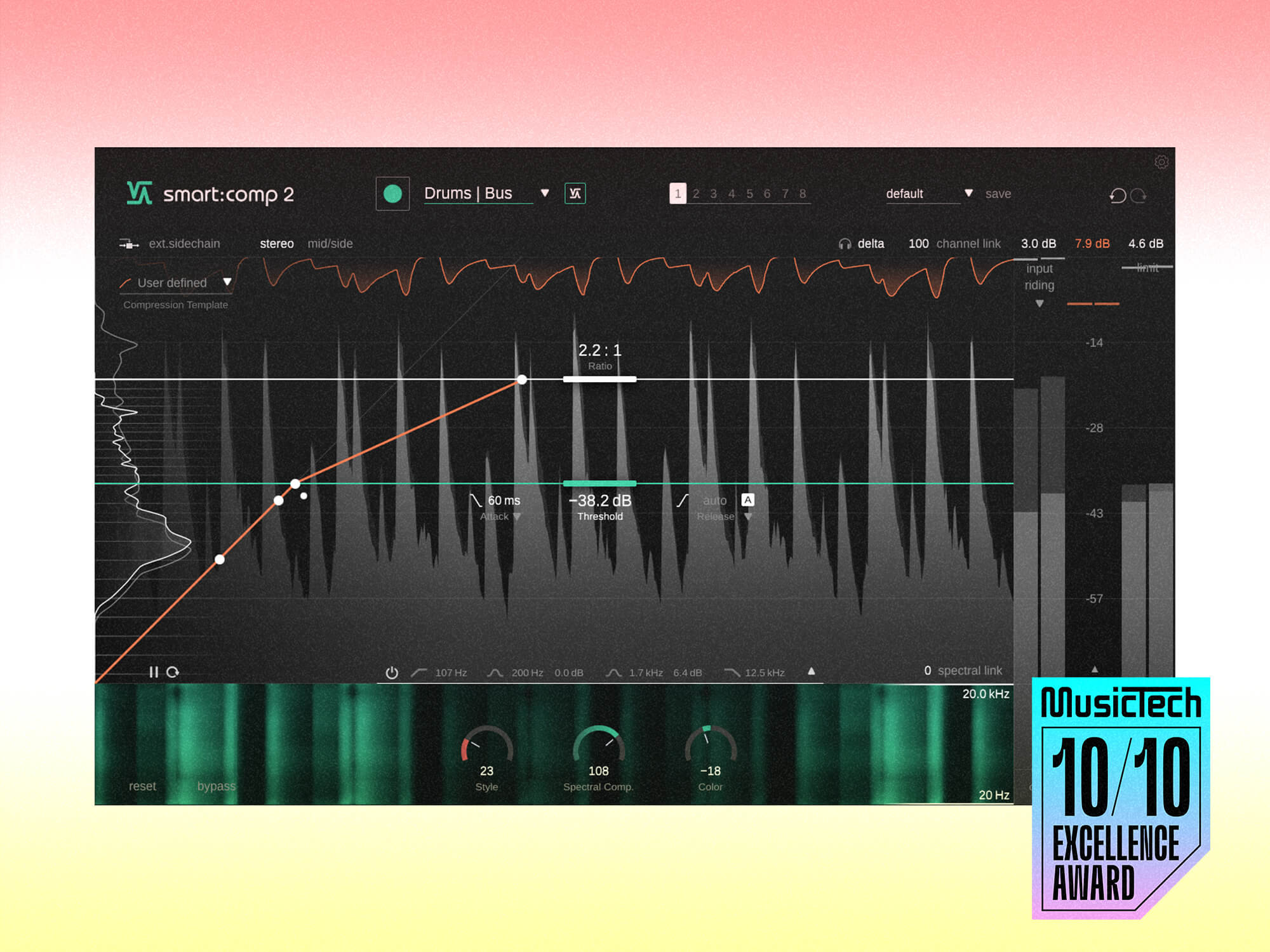 ⊕ Can give clean and transparent results, or a little dirty if required
⊕ Exceptional real-time visual feedback for every parameter change
⊕ Intuitive layout of main compressor controls
⊕ Deep and flexible editing

sonible has made a name for itself with a slew of modern AI-based plug-in releases, including the recent smart:limit, which has now found a permanent place in our mastering chain. Its latest plug-in is smart:comp 2, an update on the company’s 2019 spectro-dynamic compressor 2019. Not only can it generate custom presets at the push of a button, but it can also smooth out tonal imbalances to create a clean and uniform sound.

This new version features a sleek new GUI and a healthy list of new features. But is it smart enough to replace your favourite compression tools?

As with sonible’s other smart products, presets are not included because you’ll create custom patches each time you use it. You do, however, get a list of 31 Profiles to start with, which is up from the nine Profiles found on the first version. These include a Universal preset for general use, plus different drum parts, a drum bus, acoustic and electric guitar, different types of synth and vocal, nine different mix genres and more. Each profile will prime smart:comp 2 to give slightly different results, and will also change the shape of the spectral compression spread. Once you’ve chosen a profile, you simply click the learn button whilst playing some audio, which takes around seven seconds. You can then freely switch between Profiles to see how they change the settings should you wish. 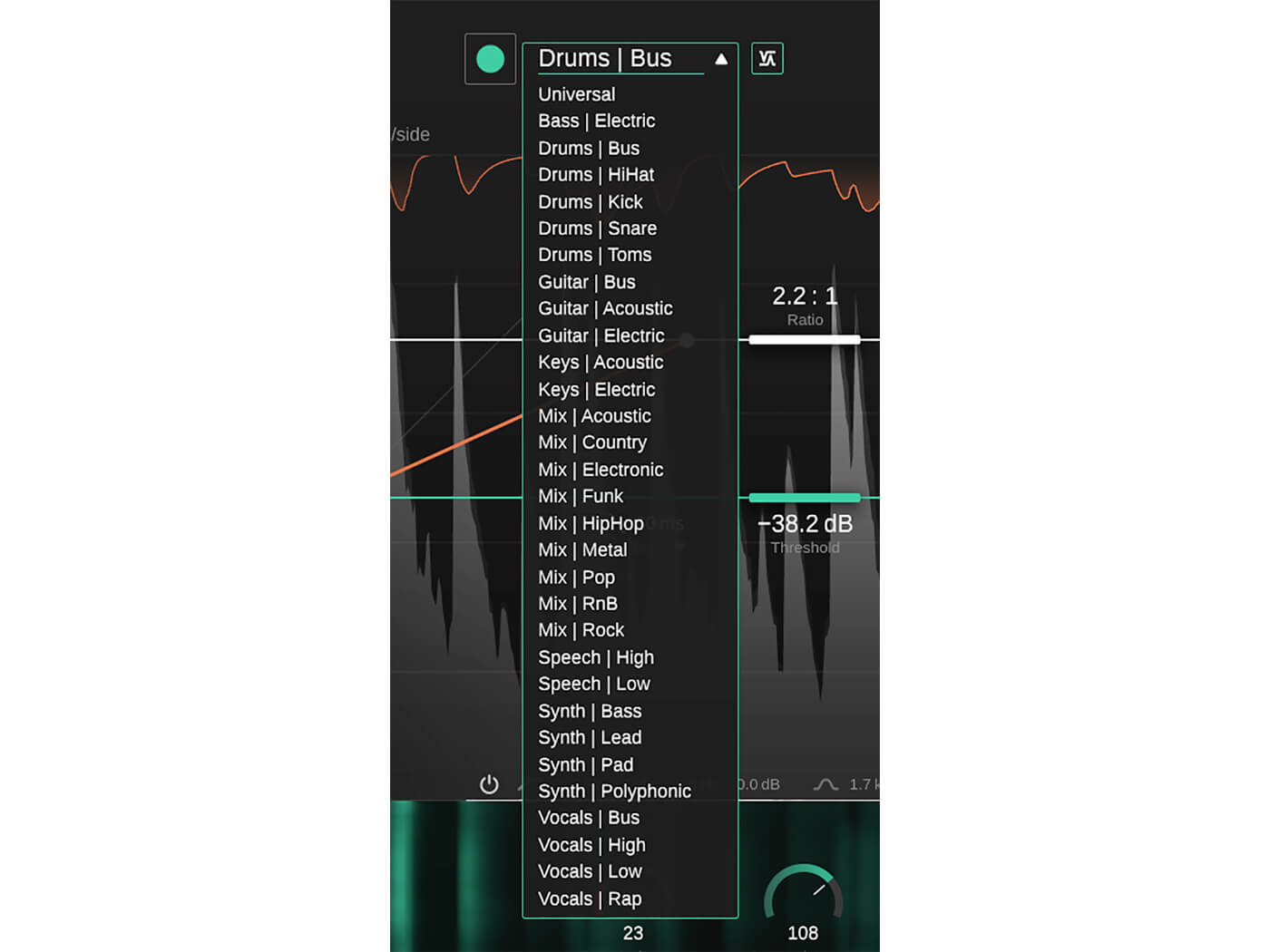 It’s here that one of smart:comp 2’s new features can come in handy. Where in the first iteration, you simply had an A or B plug-in state recall, this version now has eight slots to save and quickly flick between settings. This is especially useful when you want to test out different ideas, or compare subtle parameter tweaks, and it’s also automatable so you can have different settings for certain sections of a track. You can also save a whole user preset if you come across something you think could be reusable.

Once you’re up and running, one of the first things to strike you is the clarity of the resizable GUI. smart:comp 2 is a feature-packed compressor that packs in a lot of information, so some of the additional parameters on the periphery might take some getting used to. However, it’s the way the ratio, threshold, and transfer curve are linked in to the before and after waveform, the gain reduction meter and the histogram meter that really makes it a revelation. Never before has compression been presented with the controls so intrinsically linked to the metering. You get a real sense of squashing the waveform as you lower the threshold or increase the ratio (by moving it downwards).

Also on the threshold line are the attack and release times, which include an auto-release, tempo sync, and expandable edit windows where you can adjust the hold time and curve for more nuanced results. Every time you make any changes to any of the parameters, including the spectral settings and sidechain EQ (which we’ll get to shortly), the graphics update instantly, showing exactly how your moves are affecting the gain reduction and resulting waveform. It helps to make smart:comp 2 an excellent tool for learning and visualising how compression affects audio, and can help with dialling in specific settings when used in conjunction with your ears.

The auto gain also comes in handy here, as you can make wild changes while maintaining the output level, allowing you to concentrate on how you’re manipulating the signal. We occasionally find ourselves having to turn it off and manually volume match, but for the most part, it works well.

One of smart:comp 2’s headline features is the spectral component, which splits the signal into over 2,000 bands and then rebalances any resonances to help give smooth and transparent results. The main spectral dial goes from 0 to 150 and a spectrogram shows which frequencies are being most affected. There’s also a Color dial that shifts the processing in the background to produce brighter or darker results, and upper and lower limits that let you focus on a more specific region. It’s similar to Soundtheory Gullfoss and iZotope Neutron 4’s Shaper module, but it’s been calibrated a bit more on the subtle side, so that you don’t destroy your original sound.

We found the spectral processor did a stellar job of reining in some unwanted vocal resonances and pokey kick drums, and it’s useful to have as an additional tool built into the compressor. It might have made it even more flexible if you could load your own audio files to build your own shapes, though.

Aside from using the spectral compression directly on the audio, you can also feed in a sidechain signal for some focussed spectral ducking. This is a fantastic way to create space in a mix when two instruments are competing, with effective resultswhen transparently ducking some keys during a vocal section. Speaking of the sidechain, there’s a pop up EQ with low-pass, high-pass and two parametric bands that you can use to weight the compressor towards certain frequencies or remove the bass to reduce pumping. 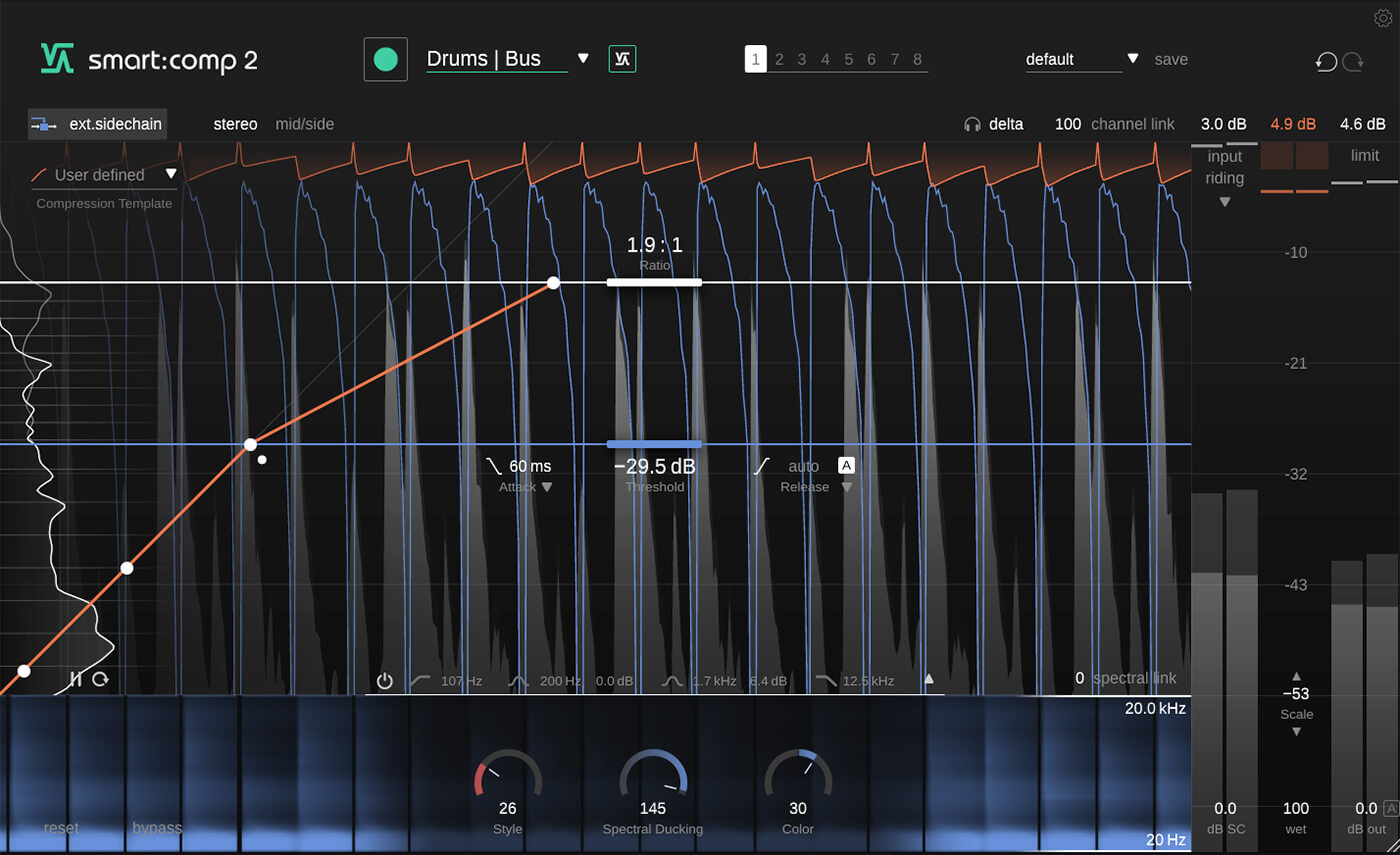 Some of the most dramatic results come from using the Style dial, which goes from Clean to Dirty. This adds some additional harmonics and gives you a slightly fuller and punchier sound. The clean sound really is wonderfully transparent and is suitable for mastering, but it’s also nice that it can get gritty if you so desire. It’s awesome for adding some heft and a little aggression to drum beats, or just generally thickening weaker sounds.

Another stand-out feature is the free-form transfer function that lets you compress and expand below the threshold. You can choose from several presets that will squeeze or expand the mid level parts of the signal, create an effect similar to parallel compression that brings up the quiet parts, or even create a gate. You can also just click and drag on the nodes to make adjustments and use the real-time RMS level histogram to get a better sense of the results. It adds a whole new level of flexibility to the plug-in beyond simple compression, and can also be pushed for more extreme sound design. 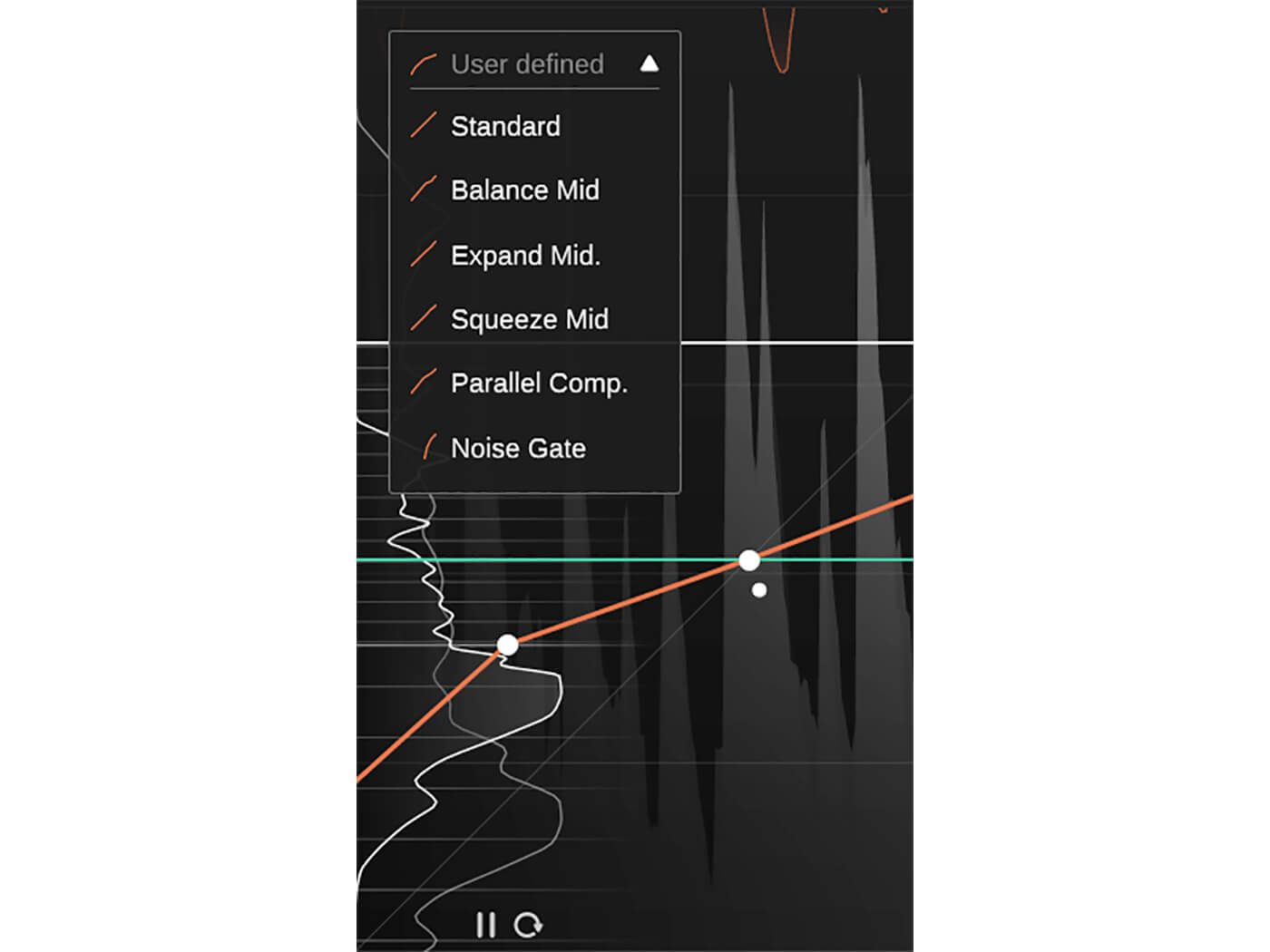 On top of all this, there’s an M/S mode, surround sound support, a dry/wet amount, and a Delta function for only listening to the compressed part of the signal. Plus, it has built-in Input Riding, which is a useful way to keep something like a dynamic vocal performance in the sweet spot before it hits the compression.

We’re seriously impressed with the functionality and the results of smart:comp 2. It can sound pristine or aggressive, is highly flexible and configurable, and has best-in-class visual representation of how the compressor is working. The AI tends to lean towards low thresholds and ratios, but these can be quickly fine tuned to fit your needs using the highly intuitive controls.