The distinctive sound and behaviour of tape echo machines, from the ferric oxide to the drive motor, get poured into Softube’s dirt-centric plug-in. 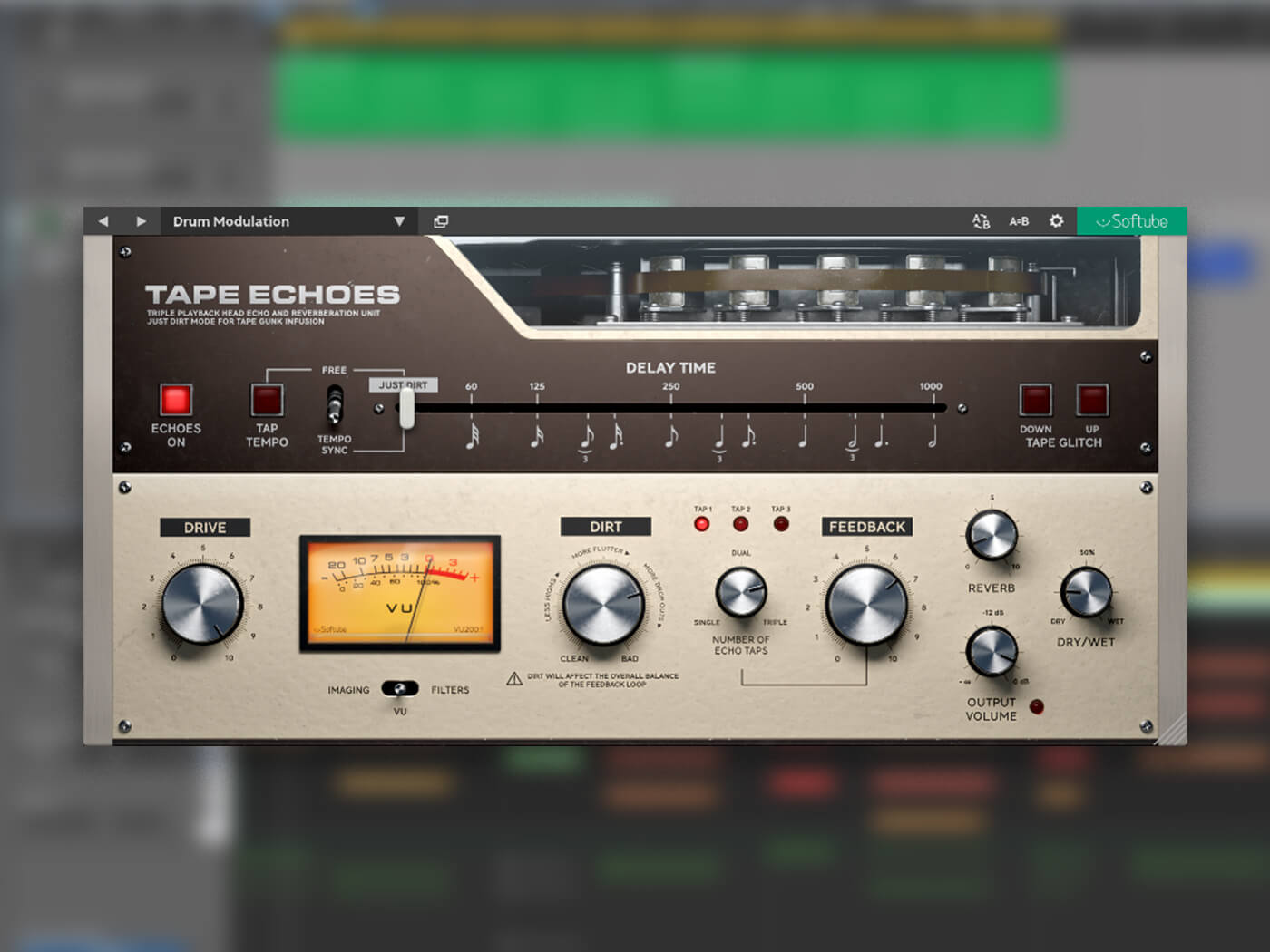 ⊖ No independent controls for wow/flutter and noise

A thorough and rewarding package of tape echo goodness/badness that plays as well as it sounds. It makes high-quality space enhancement is as easy to achieve as filthy disorder. Delightful.

Softube’s latest creation is a hybrid of the classics, blending the three playback head topology of the Roland Space Echo and WEM Copicat and the delay time slider of the Echoplex. The spring reverb is also a Space Echo must-have, though the plug-in allows serial (pre-echo) and parallel routings. The analogue flavour controls, Drive Dirt and Tape Glitch, are augmented with the benefits of digital, from tempo sync to stereo image, making Tape Echoes a veritable Best Of compilation for the (virtual) mechanical delay genre.

At the top of the plug-in interface, an animated Roland-esque tape-head array tracks adjustments made to the Delay Time and Tape Glitch controls. The upper UI allows for time (1.5ms to 1000ms) and tempo sync delay modes with the offering straight, triplet and dotted divisions up to 1 whole note. In sync mode, you can click the division markers to set exact delay timings or you can drag them to be a little funkier around the beat. Dragging the Delay Time slider produces the requisite pitch slurring, as does the momentary Tape Glitch up and down buttons that temporarily change the tape speed. This fun feature emulates motor power dropouts, capstan manipulation, and general hands-on tape yanking naughtiness. 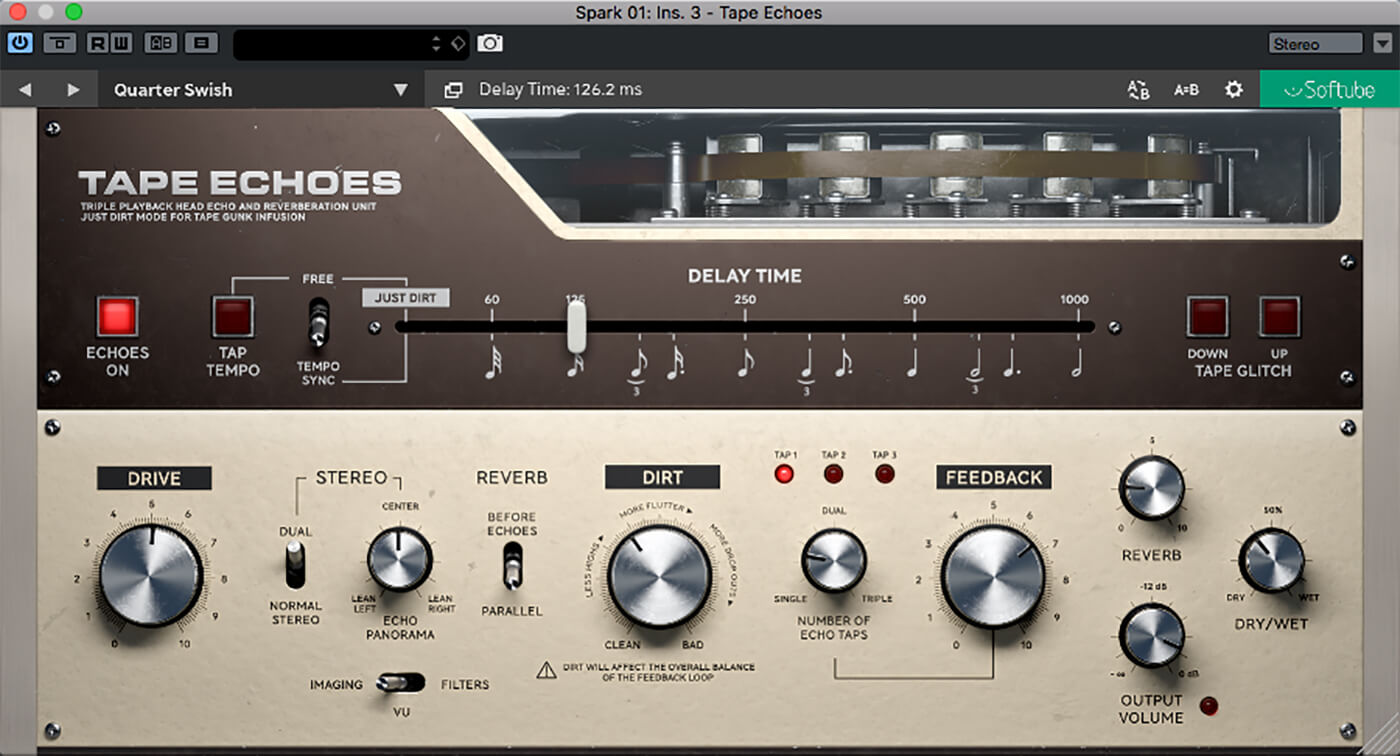 For those utilising Tape Echoes as a dub tool, the Echoes On button will prove essential. It controls the input signal’s path to the (virtual) record head, and like the Delay Time and Tape Glitch controls, is well worth automating or assigning to a controller. Outside of the strictly echoic effects, there is a ‘Just Dirt’ label at the far left of the Delay Time slider. With a 50:50 mix this super short delay (1.5ms) turns out some handsome flange effects. Shifting the slider to the right in the sub 30ms range brings the comb filtering to the fore, which you can shape to work wonders on percussive instruments in particular. It is hard to equal the mojo of real tape echo machines. Still, plug-in capabilities like this help the emulations become a creative tool in their own right as opposed to an analogue of the analogue. That said, the spring reverb brings pleasing Space Echo vibes for dub and beyond. Running it pre-echo can also soften transients entering the delay feedback path. 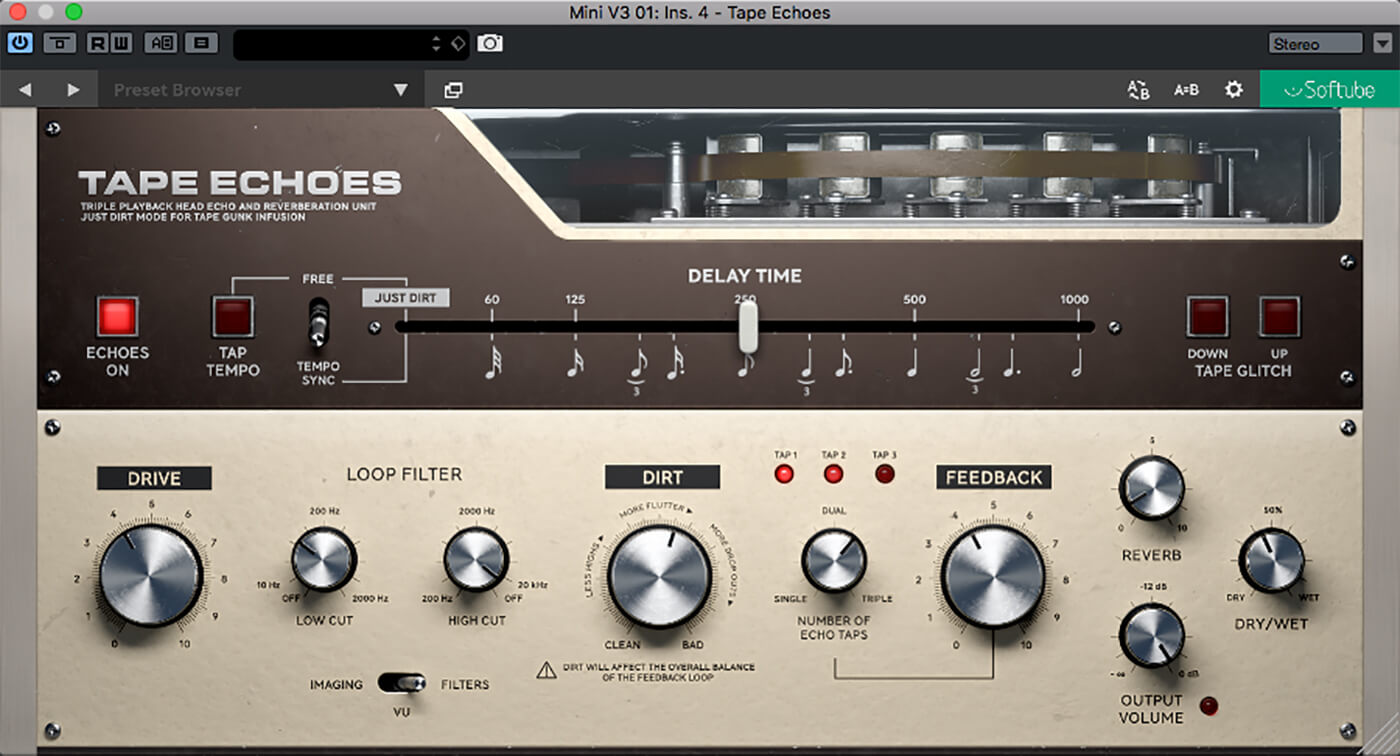 The delay sound-shaping tools in Tape Echoes are powerful and live in the lower section of the UI. The dominant knobs are Drive, Dirt and Feedback, which do most of the heavy lifting. Drive adds saturation with the low and high-cut filters (accessible via a switch below the VU meter) helping tame a blown-out low end and harsh highs when things get cranked. These simple one-knob filters are part of the feedback circuit and dictate much of the delay’s flavour without any noticeable cutoff frequency resonance.

The Dirt knob has a more complex effect as it controls the tape and machine quality. Shifting it from ‘clean’ to ‘bad’ reduces the high-end, brings up tape noise and flutter, and increases the occurrence of dropouts. Though it’d be nice to control some of these parameters separately, its simplicity promotes creativity, allowing quicker results – and these are excellent.

Feedback is linked to a ‘number of taps’ knob, which provides a smooth mix from one to three playback heads accompanied by three red signal level LEDs to indicate the nature of the mix. For neat rhythmic delays, just the one tap is best as bringing in the other two adds a flamming effect that widens as the delay time increases; this can wreak havoc on a percussive line.

However, with less rhythmic sources, the extra taps bring a gorgeous diffusion to the echoes all across the Delay Time slider range. The Feedback knob will get you into full-blown overload, so it requires some care, but it is easy to find the sweet spot where the echoes are sounding spacious and washy without tipping over into howling meltdowns.

In concert with the Dry/Wet and delay Output Level knobs, these lower portion knobs are well worth breaking out onto a controller for a more realistic manual balance as the quality is ripe for tweaking. Automation also lets you reap massive rewards by shaping and shifting the echoes around lines and gaps. 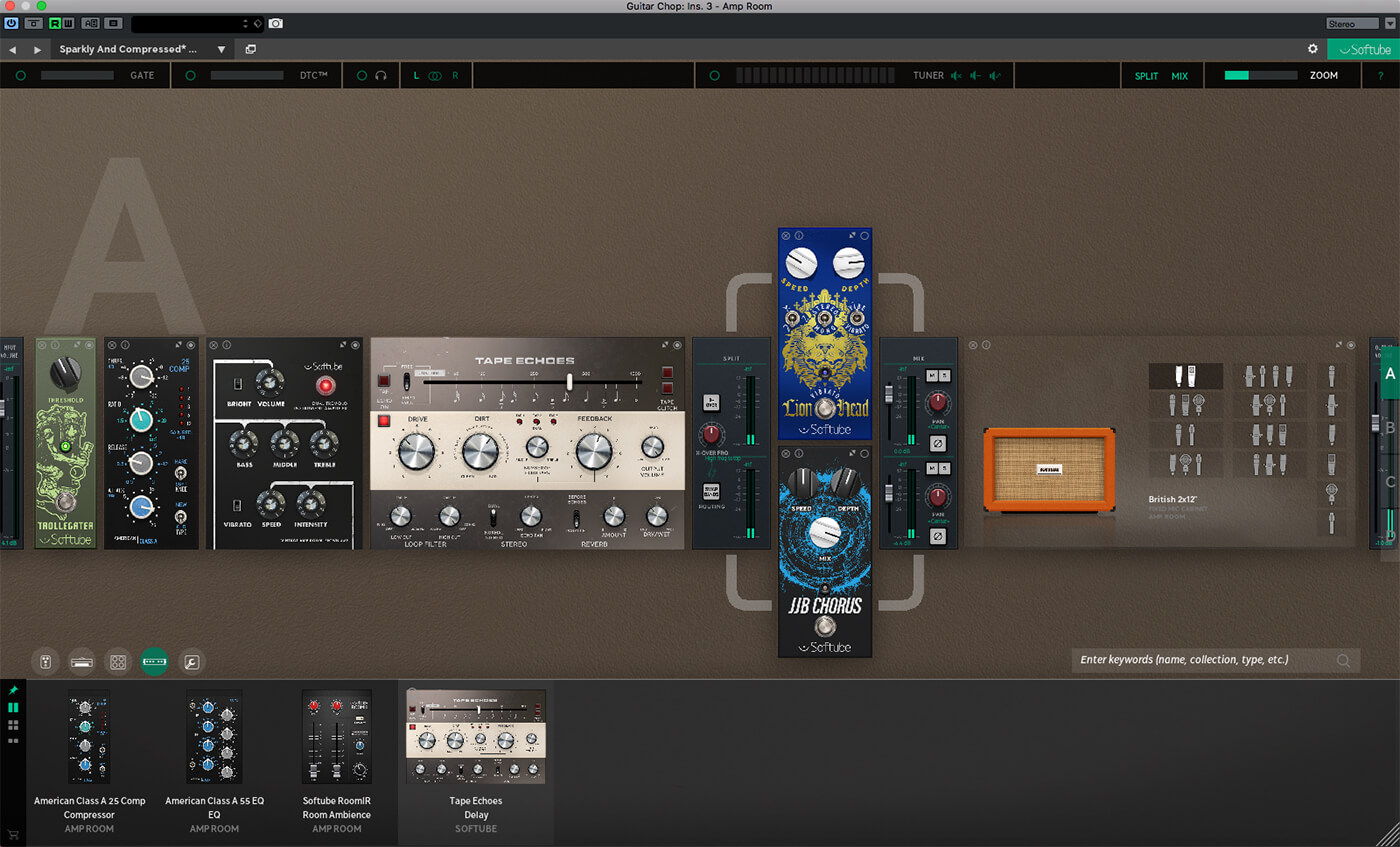 In Softube’s Amp Room plug-in, Tape Echoes shows up as a module for placing anywhere in the signal chain, adding a rich flavour with all the features of the native plug-in. As a module in Softube’s Modular instrument, Tape Echoes can act as a send effect or wired in after the final VCA(s). There’s also potential for more radical deployment, especially when the four CV inputs (Drive, Time, Feedback and Dry/Wet) are put to use. Before a VCF or VCA, the echoes, dirt and noise can be ramped right up and shaped, so they meld with the oscillators and other modules without drowning the final sound in delays. 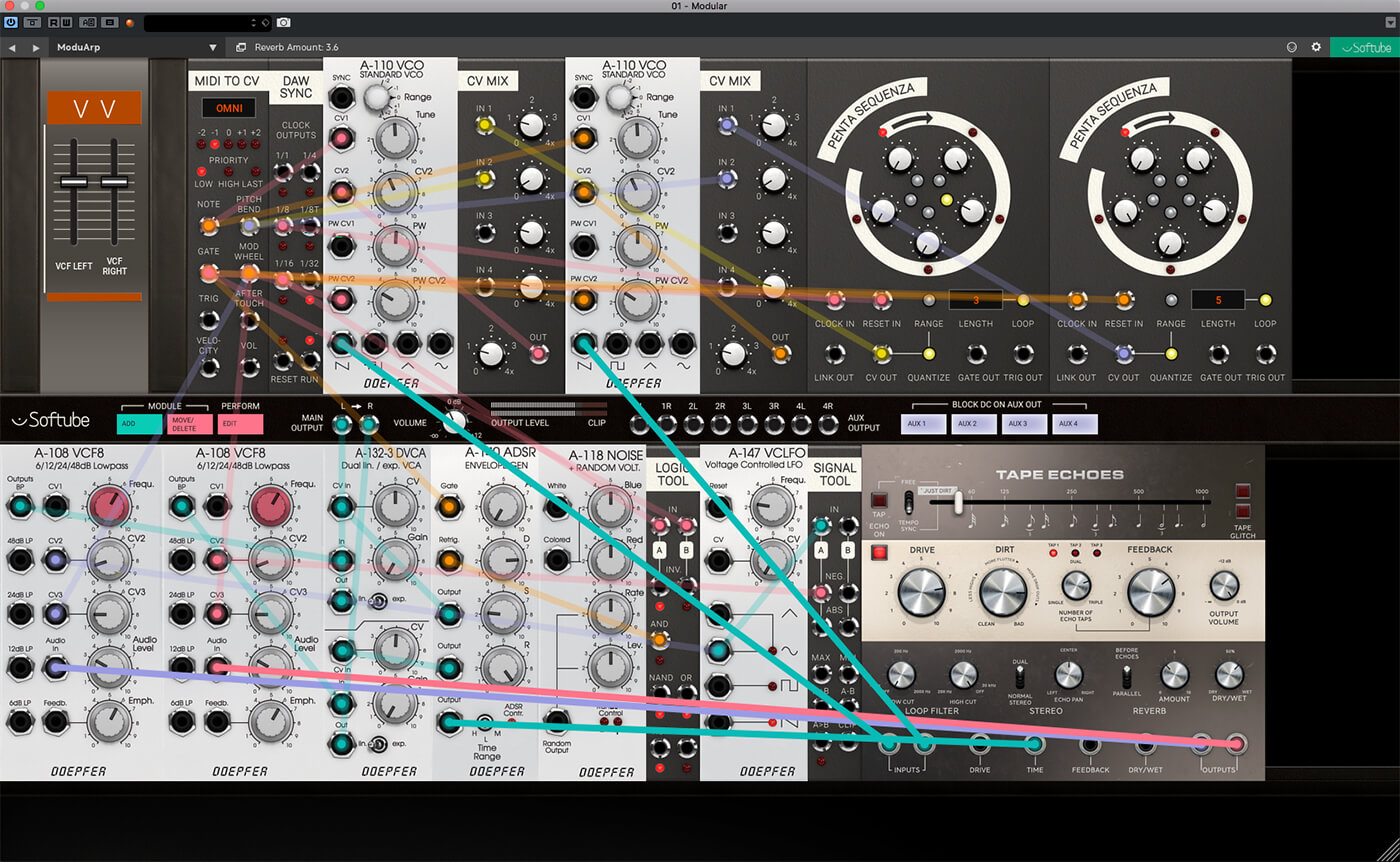 It makes an earthy foil to some of the more harsh sounds that brew up in Modular (and modular synthesis in general). From saturating oscillators and filters to rigging the Dry/Wet CV to the inverted ADSR envelope generator to duck the delays, there’s an awful lot of fun to be had with this pairing.

Tape Echoes does what it is supposed to. It sounds like a tape echo without just mimicking one model. It is easy to create effects you expect and explore for ones you don’t. It can gently lift a source in a mix, and it can take the foreground in a heavy dub style. It can do set-and-forget, and you can tweak it endlessly as an instrument in its own right. It’ll even turn out a sweet, clean echo like a newly calibrated machine with fresh tape, even though you’ll probably come along later and start turning up the dirt. If you’re already using Amp Room or Modular, then Tape Echoes will add even more value than it does as a plug-in, but even without those add-ons, it’s still well worth the price.