Can this subtle blend of broad-brushed EQ, detailed saturation and gentle compression make your mixes blissful? 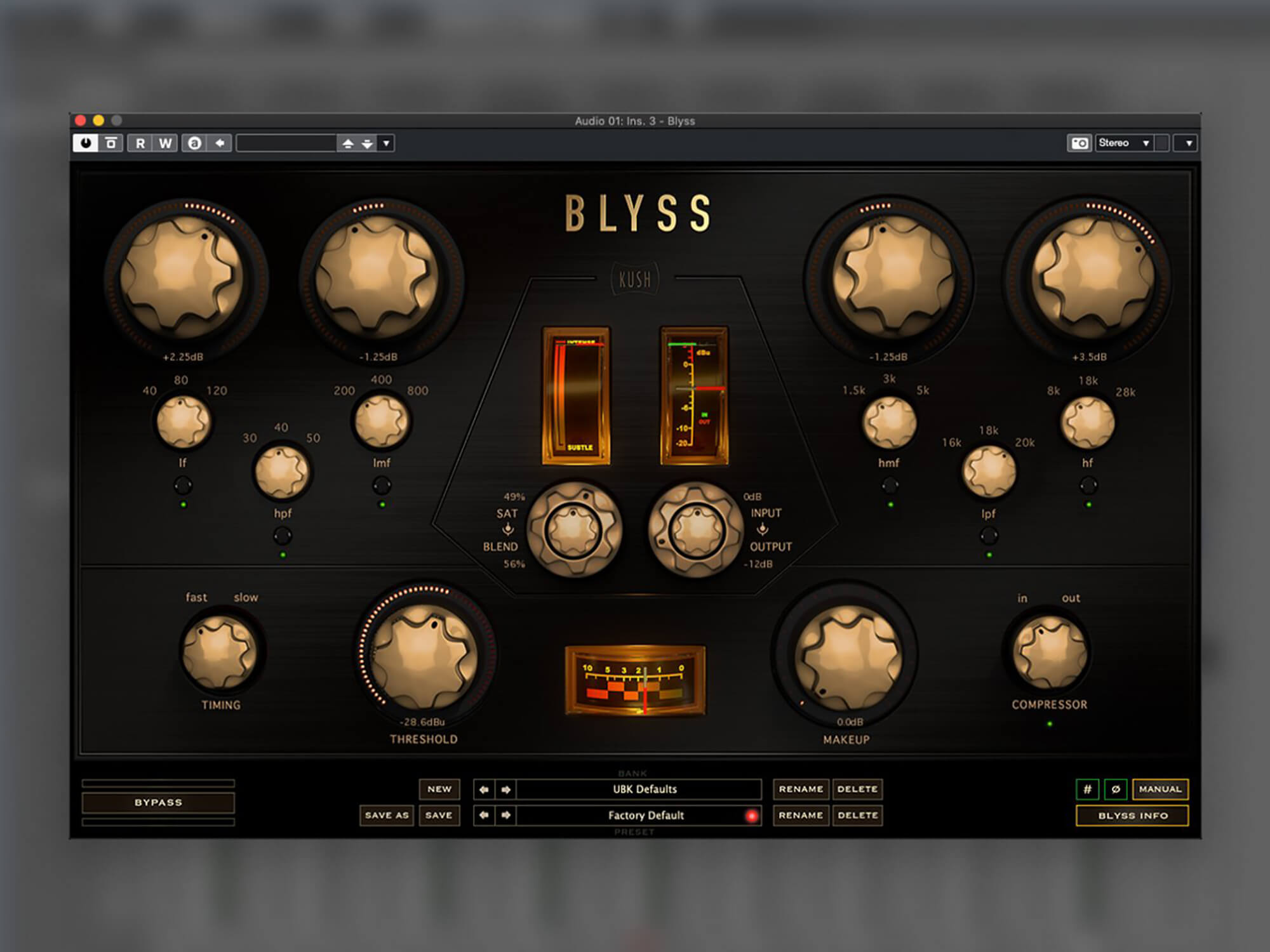 Kush Audio’s Blyss, while billed as a “Mastering Channel”, isn’t a fix-all for your tracks; instead, it’s a sonic sweetener that breathes analogue warmth, depth and body into your mixes and stems.

Blyss comes from a rich analogue-modelling tradition, the popularity of which is easy to understand. High-end analogue circuitry can lend a quality to sound that is hard to put into words. “Warm”, “airy” and “fuzzy” are often used but don’t capture the subtle overall sonic impact of firing electrical currents through real circuits. Techniques for digitally modelling these characteristics have become exceptionally advanced in recent years. And, despite high-end analogue processing still having the sonic edge, digital processing is much more cost-effective, far more convenient, and infinitely more capable.

LA-based Kush Audio – also known as The House of Kush – straddles both of these worlds. Specialising in dynamics, EQ and distortion, the company built its reputation on boutique all-analogue outboard processors. More recently, Kush has built up a range of analogue-modelled plug-ins. Rather than modelling these on specific hardware, the company has harnessed its analogue expertise to create models of analogue components and processor stages which it then combines into entirely original – yet fully analogue-modelled – plug-in processors.

Blyss comprises an equaliser, saturator and compressor, and is as useful on full stereo mixes as on submixes/stems, and single channels. But, no matter how you use it, Blyss is all about adding colour and character through gentle and smooth processing.

The plug-in’s analogue roots are reflected in the interface design, with large, chunky dials and vintage-style needle meters. It looks good, if a little dark and dusky, and the UI is oversized. It could do with a zoom setting, so it doesn’t take up too much screen real estate. On the flip side, such a spacious panel does keep things easy to get at, and allows the meters to have a useful range of travel.

Blyss’s first processing stage is a six-band equaliser featuring high- and low-pass filters, shelving low and high bands, and two mid bands. Each of these filters and bands have three switchable operating frequencies. For example, you can switch the high-pass filter’s cutoff can between 30Hz, 40Hz and 50Hz, switch the shelving low band’s corner frequency between 40Hz, 80Hz and 120Hz, and the upper-mid band’s centre frequency can be 1.5kHz, 3kHz or 5kHz.

The fixed frequency points may seem somewhat limiting if you’re accustomed to using fully parametric EQs. However, each band’s frequencies are well-chosen, and the wide, gentle cutoff characteristics make highly focussed frequency control much less critical anyway. Adding to this gentle, broad-brushed ethos is the relatively conservative 9dB of cut and boost offered by the shelving and mid bands.

Blyss isn’t an EQ for making precise and clinical adjustments, but it works excellently for making musically sympathetic adjustments to the overall tonal balance of an individual part or mix.

The EQ passes its signal into Blyss’s saturation stage, which is in many ways the heart and soul of this plug-in. Kush has poured an enormous amount of effort into designing the saturator, aiming for a virtual circuit that operates in as analogue a way as possible. The results are impressive and in keeping with Blyss’s subtle nature. 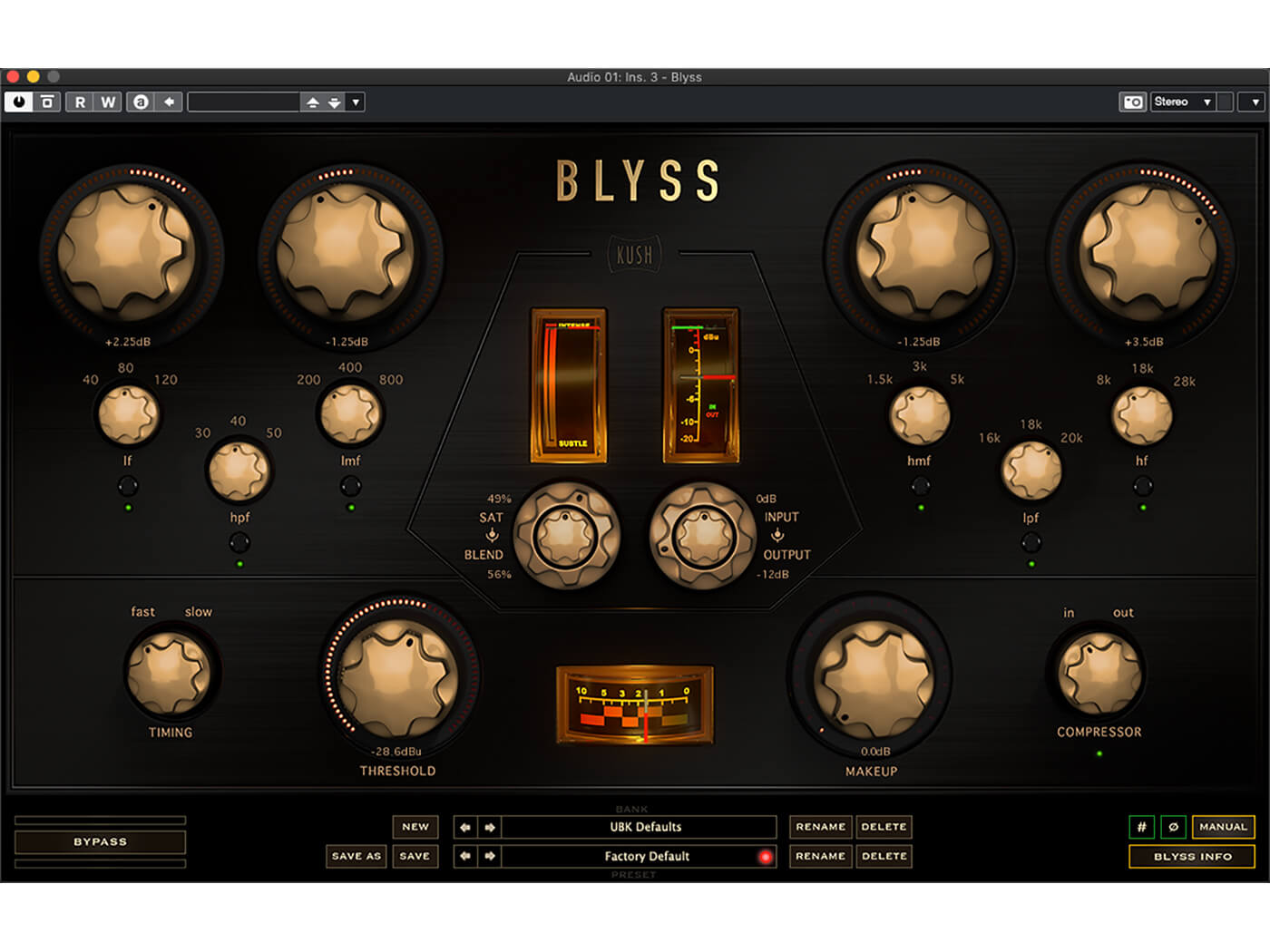 Low settings offer just the vaguest hint of softening and airiness, but things remain very warm, detailed and pleasing up to 100% saturation. The interaction between input level, EQ settings and saturation tone and strength is impressively analogue-like too. The effect can be delicate and understated, but a meter visualises how hard the saturation stage is working. While helpful, this doesn’t feel well-calibrated, as it regularly shows relatively high saturation levels even when none is audible, and the saturation dial is at 0%. Also, the meter maxes out even when the effect is gentle and barely discernible.

Once saturated and warmed, the signal arrives at Blyss’s compressor stage. Kush refers to this as a “Finishing Compressor” because it’s designed to give gentle, transparent dynamics control without the aggressive, squashed character of conventional compressors. It’s straightforward to use, with just a threshold control that determines how much gain reduction will be applied, and a switch to toggle between fast and slow response times. There’s a makeup gain dial to compensate for any lost level, and another of Blyss’s neat needle-style meters showing the processor’s gain reduction.

Broadband compressors such as this often struggle when applied across a full mix, causing high frequencies to pump noticeably in response to the compressor being triggered by the higher energy of lower frequencies. But the compressor in Blyss suffers no such shortcomings and delivers the sort of transparency one would typically turn to a multiband compressor to achieve. It isn’t going to give you a brickwall sound, but as a way to quickly and easily add thickness and body to a part or mix, it’s ideal.

Overall, Blyss makes sympathetic, often understated, adjustments to a part’s warmth, body, and tonal balance. As such, it works very well when used in a mastering processing chain. But its broad-brushed, softly-softly approach means that it often needs the support of other plug-ins when working in this context. For example, a parametric EQ for dealing with specific frequency problems and a limiter for catching short, sudden peaks that Blyss’s laid-back compressor has little chance of stopping on its own.

Blyss’s real strength lies in its capability as a sweetener, and when working in this role, it can be helpful at many points in the production process. Its distinctly analogue sound and response are reflected in its stylish, vintage-themed visuals, and it’s easy to work with, giving good results quickly and with the minimum of fuss. It won’t cover every base or every eventuality but could nevertheless be a valuable addition to your effects arsenal.