This new sonic torture chamber can smash your audio into a barely recognisable digital pulp, but it can be gentle, too. 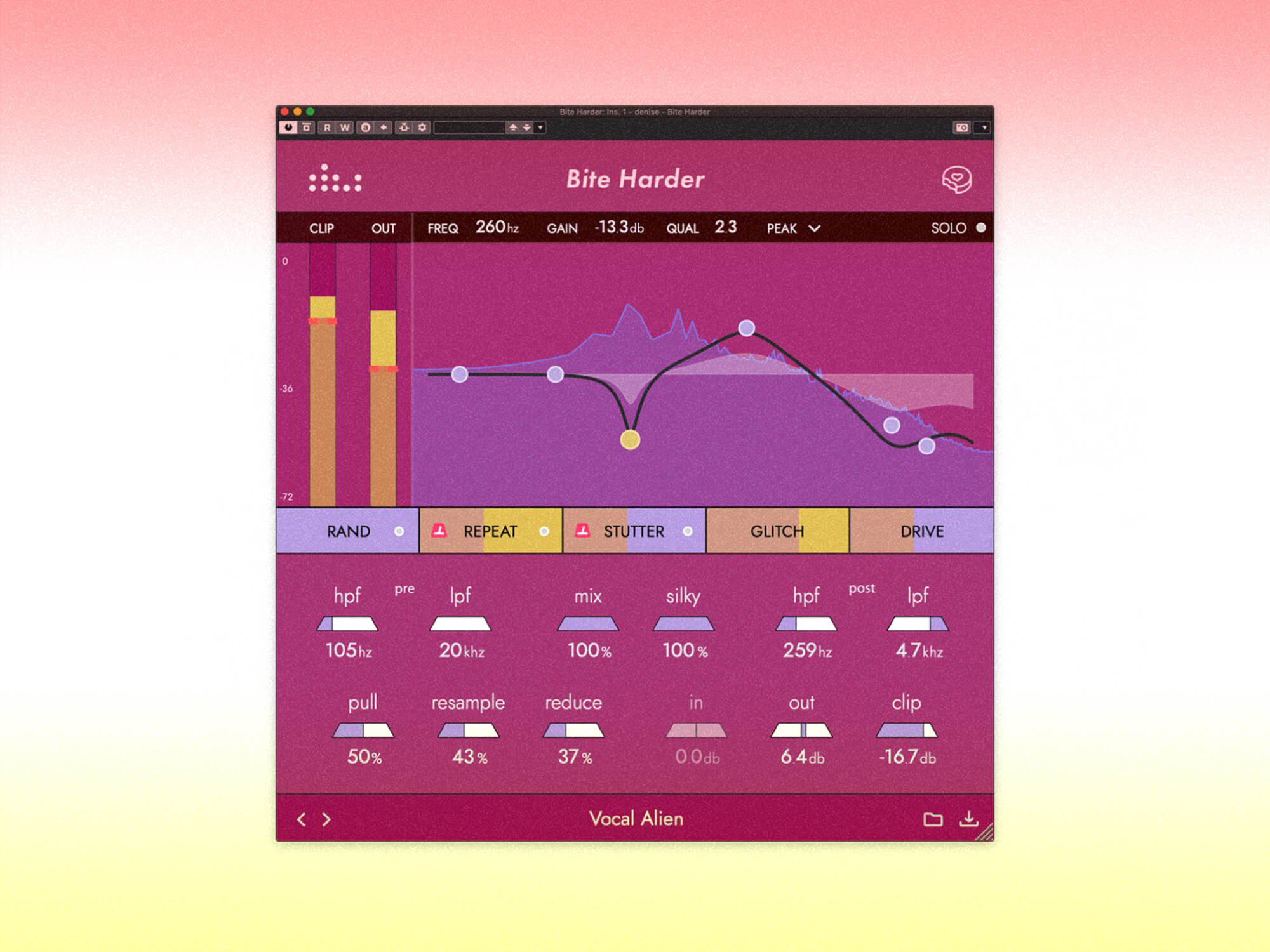 Despite bit crushing’s potential to be a very creative effect, it is rarely what one could call gentle. In fact, it would be more accurate to describe bit crushing as the sonic equivalent of dropping a large block of marble onto a blancmange. But imagine, if you will, that you were able to carve that marble into an interesting shape – something that would make Rodin proud. Then, the result of the drop would still be an obliterated blancmange, but the pattern of pink, gooey splatters would be very different. Enter Bite Harder, a new and surprisingly flexible bit crusher toolkit from Denise Audio that’s ideally suited to performance.

The first of those tools is Bite Harder’s clever “push/pull” EQ, as previously seen in God Mode and Dragon Fire. The “push” part is a six-band EQ that operates on the input before the signal arrives at any of Bite Harder’s sound mangling stages. You can modify the curve by dragging the handles that overlay the realtime spectrum analysis readout, which occupies the upper half of the plug-in window. Alternatively, you can click a handle and type or dial in the desired values in the info line above the analyser. Here you can also change the band’s filter type between high shelving, peak and low shelving, and adjust the band’s Q/bandwidth. There’s also the ability to solo the selected band, helping you to pinpoint what it’s doing.

The “pull” part of the EQ comes after the sound mangling stages, and is an exact mirror of the push EQ albeit with a variable strength setting: at 0%, no pull EQ is applied, whereas at 100%, the pull EQ completely negates the push EQ. The colouring added by the push EQ radically changes the tone and character of the plug-in’s main processing stages. The pull EQ’s job is then to reduce or remove the resulting tonal imbalance in the output.

Once through the push EQ, the signal arrives at a high- and low-pass filter stage, which provides further options for sculpting timbre before it hits the bit crushing stages. A second filter is also included at the end of the chain, just before the pull EQ, for sculping the processed sound.

The core of Bite Harder’s sonic torture chamber is an advanced bit crusher, allowing the signal’s sample rate and bit depth to be modified. Unlike many other crushers, which work with conventional bit depth or sample rate values, Bite Harder uses percentages. The benefit being that value changes are smooth rather than stepped, and follow any changes in the session’s bit depth or sample rate. This makes it easy to find sweet spots and works well with automation and live adjustment.

You can dial in the results of the bit crushing using the “silky” parameter that adds an increasing amount of smoothing to the distorted, bit-crushed sound. When set low, the distortion caused by the bit crushing brings in a lot of noise across the whole frequency spectrum, which has a masking effect on any traces of the source sound that survive the bit crushing. Increasing the “silky” parameter seems to reduce that general noisiness, making the source signal more prominent, but also making it sound more mangled.

Next up, the already battered signal can be ring modulated using the Glitch slider. This adds a whole new dimension of pain for your audio to endure. It then arrives at an overdrive stage for a final bout of pummelling. This is a little bit of overkill really – a bit like throwing a glass of water at somebody who’s just emerged from an ice bath. However, the higher-end fuzziness of the analogue-style distortion does have the side-effect of slightly softening the harshness of the bit-crushed distortion.

With so much distortion flying around, and the ability to make frequencies suddenly scream out, Bite Harder protects your speakers and ears with an output limiter. When used in conjunction with the input and output level controls, this provides yet another distortion stage. Drive the signal into the bit crusher for more intense digital clipping; drive it into the limiter for more analogue-like clipping.

Although Bite Harder is an effects processor, it can feel quite instrument-like, especially when you start using multiple implements in its sonic torture chamber.

You can coax fabulous sounds and effects from the plug-in through the copious use of automation. Or, with its parameters mapped to a hardware controller, Bite Harder is a special live performance effect suitable for producers and DJs, and whether you’re in the studio or on stage. These live credentials are further enhanced by the plug-in’s repeat and stutter features. These can be synced to your DAW or operate in absolute time, and are enabled and disabled with simple momentary (non-latching) switches.

The plug-in is rounded off with a randomise button for when you’re feeling lucky and a set of 26 presets, twelve of which were designed by Berlin-based producer Florian Meindl, and the remainder by the Denise team. The preset system is primitive, simply opening up a file browser window from where you can choose a preset to load, or name and set the disk location of a preset you wish to save. There are some interesting presets to play with, though, which also serve as good starting points for your own creations.

Bite Harder can take gentle settings, and you can, of course, control the prominence of the effect using the wet/dry mix control, but if describing it in a single word we’d have to use “brutal”. There is an awful lot of nuance in that brutality, though!

A lot of what Bite Harder does could be achieved with a garden variety bit crusher processor in a chain with a stack of other filters and EQs, but by packing the various processes together into a single plug-in, Denise has created something much more useful and satisfying. It isn’t going to suit everybody’s production style, nor every style of music, but it does bring a huge amount of colour, interest and variation to your creations.