Venerated old analogue compressors are still used in professional mastering houses and fawned over by gear aficionados. But what if you could get their oft-parroted attributes in a simple plug-in? 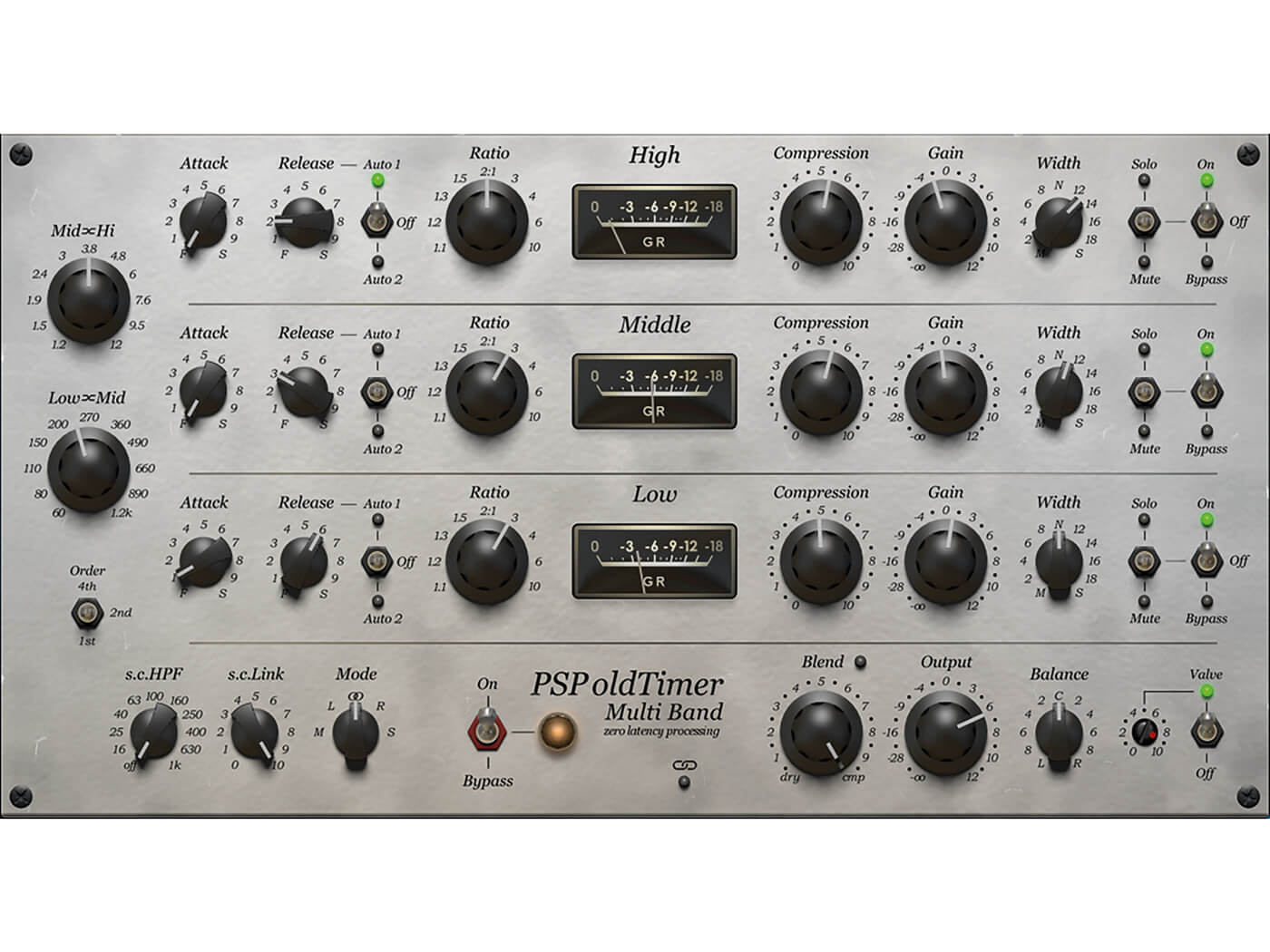 When it comes to the dynamic processing of audio with a wide spectral range – full mixes, pianos, drum kit – you’ll want a multi-band compressor. Multi-band compressors split incoming signals into frequency bands, feeding each into its own discreet compressor before mixing the results back together again. The advantage of this is that high-energy passages in one frequency band won’t cause other frequencies to be compressed. All that’s compressed is what needs to be. This helps you avoid unwanted pumping effects. Plus, by giving you control over the volume balance of different frequency bands, you’ve effectively got yourself a broad-brush EQ too. 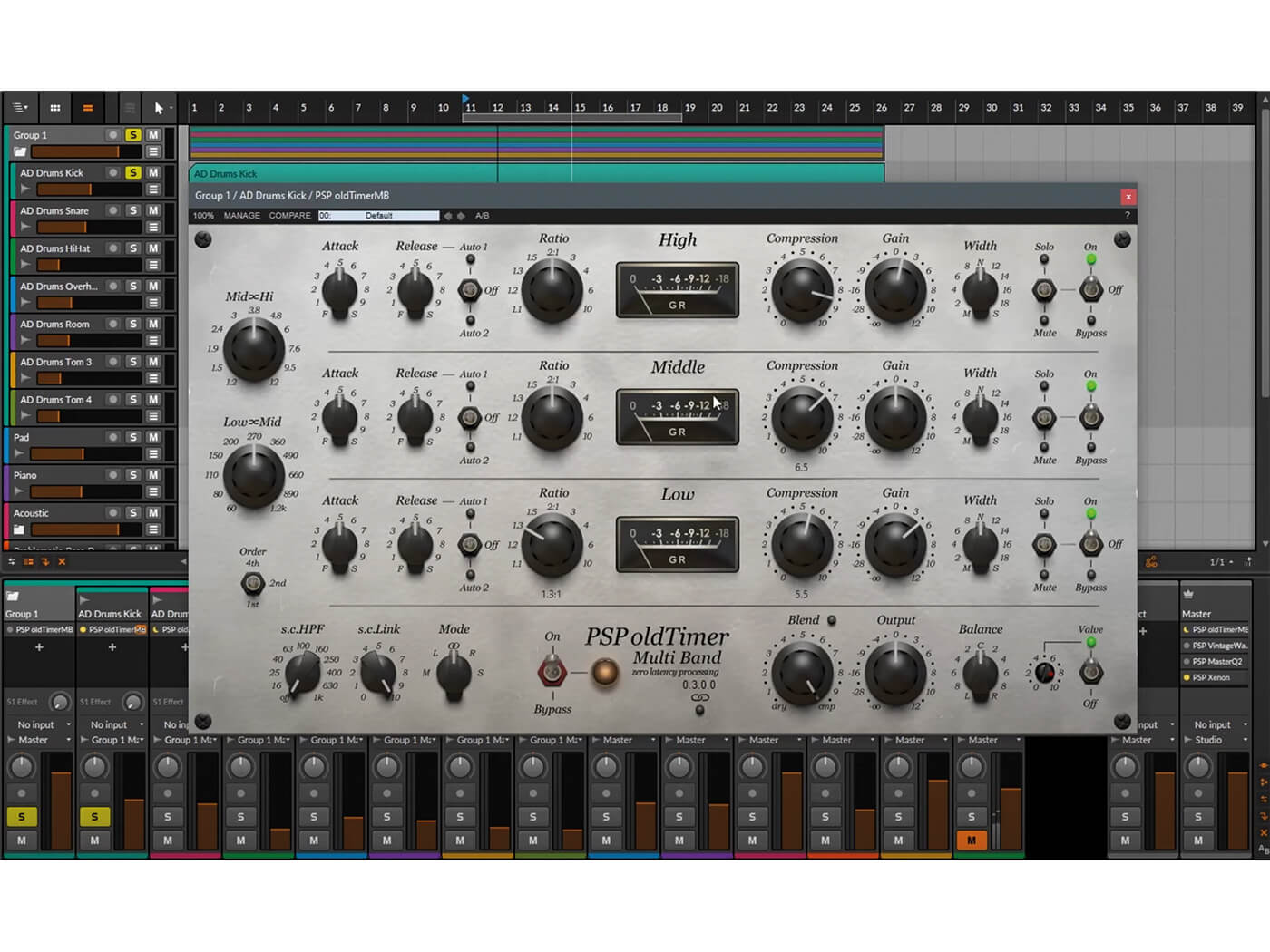 OldTimerMB is a vintage-style processor in look and feel. Its interface mimics the aluminium fascias of large boutique rackmount units, with all three bands’ controls accessible without having to first select that you wish to work on. This contrasts with many other multi-band compressor plug-ins, wherein there’s typically just a single bank of compression controls for the selected band.

On the left of OldTimerMB’s fascia, there are two dials for selecting the band crossover points (the frequencies at which the low band ends and the mid starts, and the mid band ends and the high band starts). There’s also a three-way toggle that changes how aggressively the crossover frequencies are filtered: 1st Order gives a gentle filter slope; 2nd Order is steeper and akin to what you’d find on most standard crossovers; and 4th Order gives a sharp filter slope. The filtering of the crossover frequencies can have a significant impact on the processing results; the steeper the crossover filter’s slope, the less the bands are blended, which makes the processing of each more individually focused.

OldTimerMB’s compressors maintain the vintage feel on which they’re based. There are attack and release controls (with two auto-release curve options for each), and a switchable compression ratio that ranges from 1.1:1 to 10:1. At low settings up to and including 1.5:1, the compressor has a classic DBX-style over-easy soft-knee response that smooths the transition from no compression to at-ratio compression for more transparent results. Ratios of 2:1 to 10:1 have similar soft-knee characteristics and also allow through short, loud peaks without causing the compressor to overreact or clamp down on the output level.

Another vintage-tinged feature is the compression control that’s turned up to increase the bands’ overall compression. This apes the feel of the peak-reduction dial found on classic opto-compressors but, in reality, is just a garden-variety threshold control, only reversed so that turning the control clockwise reduces rather than raises the compressor’s threshold.

Gain-reduction metering is taken care of by a needle-style meter situated between the ratio and compression dials. The retro nature of this readout, however, only goes as far as aesthetics – the needle doesn’t model the slow drop-off time of real needle meters but instead accurately reflects the dialled-in compressor release time.

The band’s gain control follows the compression dial, and this is in turn followed by a width dial, something not normally seen on compressors. The width dial adjusts the mid/side balance of the band, thereby giving it a narrower or wider stereo image. It’s easy to overdo this sort of width adjustment but making it available on a band-by-band basis is a brilliant choice from PSP. If you’re mastering for vinyl, for example, it allows you to convert the low band to mono (as per standard practice) and, with any type of mastering, it allows for all sorts of stereo corrections and enhancements. Each band’s compressor is topped off with a mute/solo switch and an on/bypass switch.

At the bottom of the panel is a master section comprised of high- and low-pass sidechain filters, a wet-dry mix level and a master output-level control. There’s also a switchable valve stage, with a dial that lets you specify the amount of the effect you want to apply, and an LED that indicates how hard the (virtual) valve is working. This creates a rich yet subtle harmonic enhancement to the signal that solidifies the bottom end while adding fizz and sparkle to the higher registers.

There’s little doubt that OldTimerMB is aimed squarely at mastering. The per-band stereo-width controls are testament to this. But the plug-in puts on a good show with drum mixes, synth parts, mix subgroups and the like as well. The modelling of classic soft-knee and DBX-style over-easy responses is excellent but we love that PSP hasn’t been so slavish to the vintage aesthetic as to detract from the processor’s functionality – the gain-reduction meters’ fall-time response is an example of this, as is the fact that the valve stage is more than just a distortion-based gimmick.

Being limited to only three bands may seem like a shortcoming and, for precise, clinical work, it could be. But from a mastering perspective – this writer is a mastering engineer who regularly works with twice as many bands – it’s a breath of fresh air. It’s much easier to set up and manage just three bands than it is six or more. Although this means accepting less focused control over proceedings, it compensates by delivering a sound that’s much more reminiscent of classic analogue multi-band processing chains. Besides, the switchable crossover filter slope goes a long way towards making up for the lost bands, because it has such an impact on how focused each band is.

Despite its many vintage inclinations, PSP’s OldTimerMB is no dusty relic, and it’s certainly earned its spot in our effects rack. The plug-in delivers the accurate high-fidelity processing of a modern compressor but with results that exude the cohesive, natural and musical qualities of analogue processing. 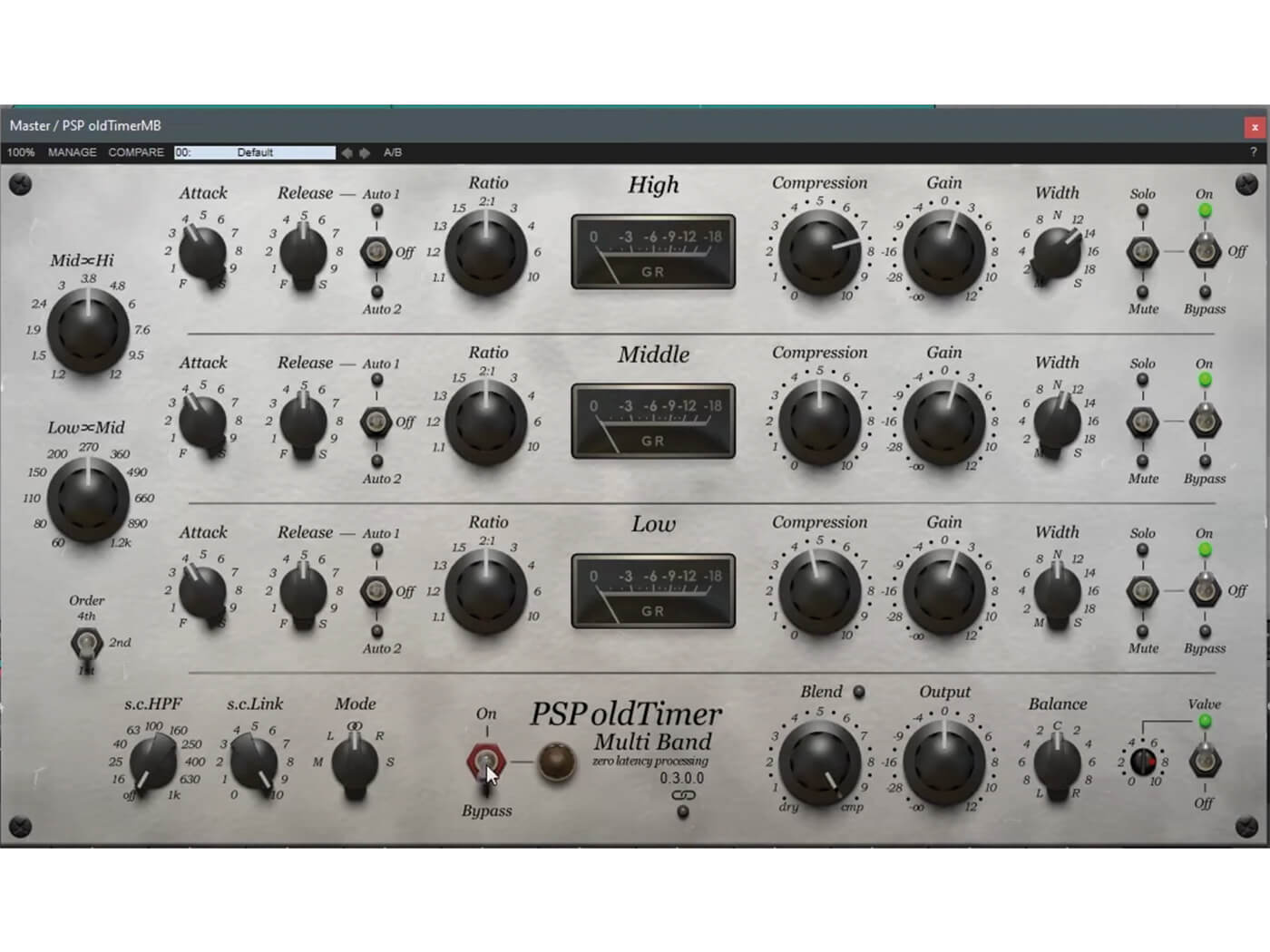 Multi-band compressors are not uncommon. Your DAW probably has at least one built-in example. However, not all compressors are born equal, and there are various underlying approaches that can make a big difference to the sorts of material a particular style or model of compressor will complement. With OldTimerMB, we have a compressor particularly well suited to use across drums, keys, sub-mixes, across full mixes or as part of mastering chains.

As such, the plug-in will be useful to most music creators. Another advantage is that OldTimerMB is easy to use thanks to its canny presentation, which lays all its controls out in a single panel. The plug-in has a 30-day trial mode. Be sure to download it and check it out for yourself. 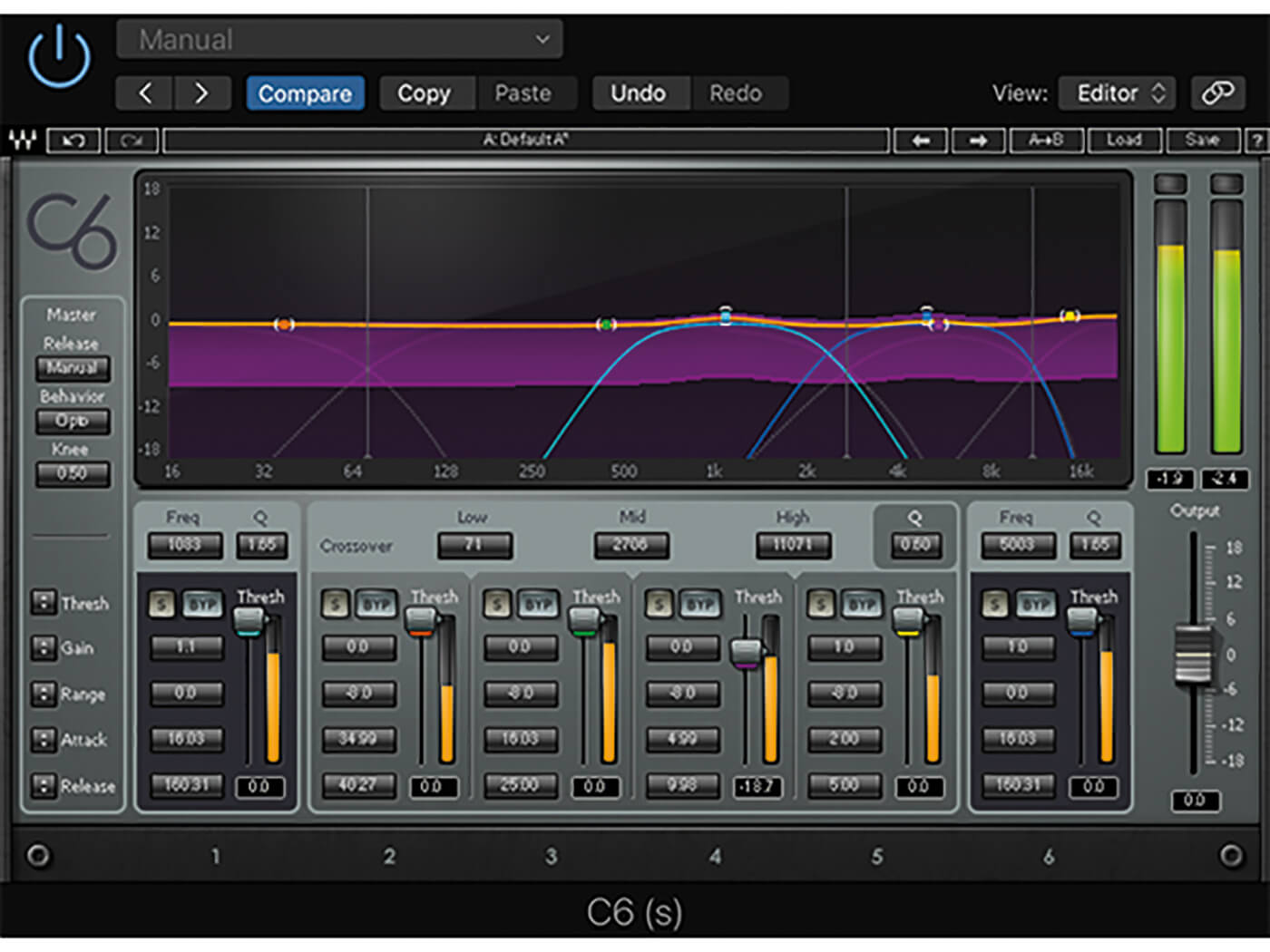 A 6-band evolution of Waves’ popular 4-band C4 compressor, C6 features two extra independent ‘floating’ bands. All have their own independent internal and external sidechain too, making this an extremely precise processor. 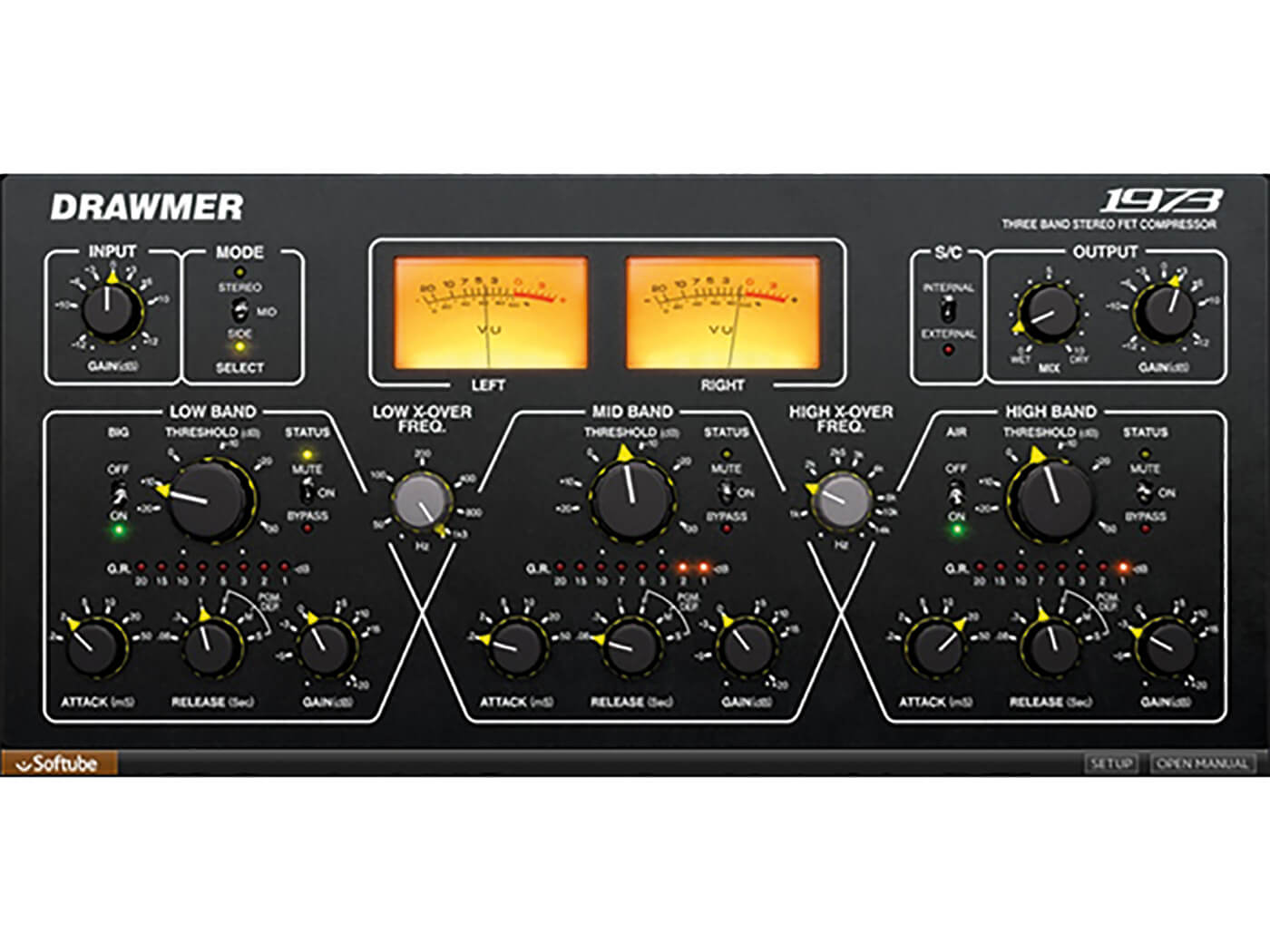 Renowned for its exquisite modelling of desirable hardware, Softube has turned its attention to the esteemed Drawmer 1973 3-band stereo FET compressor. For about a tenth of the price of the hardware, you can get the accurately modelled soft-knee characteristics and excellent stereo imaging of the original.