Recordings can always be a little sweeter and Sugar, a new analogue-inspired plug-in, aims to help us with that. Time to indulge in some ear candy… 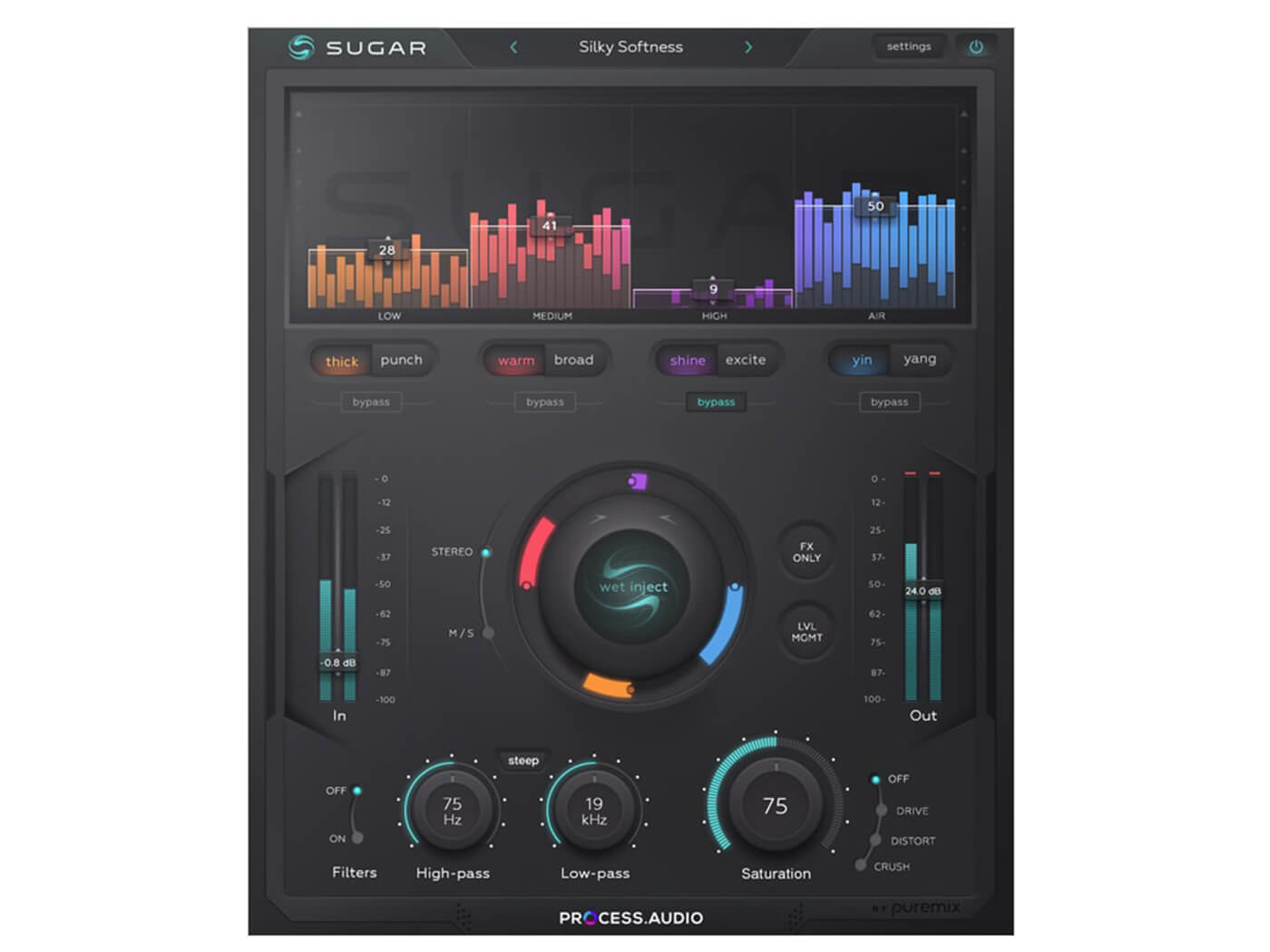 Process.Audio is the new plug-in wing of pureMix, the online education company founded by Fab Dupont. As a mix engineer, Fab’s credit list is impressive and includes André 3000, David Crosby and Shakira. Alongside this and developing pureMix, he has also been influential in developing the sound of the Lauten Atlantis and Eden microphones.

So it should come as no surprise that he is now developing a line of plug-ins, and with that background, we can be sure that Fab knows what is needed in the modern studio environment, both by professionals with plenty of experience and beginners just setting off on their audio journeys.

Sugar is an analogue-inspired audio sweetener, bringing a modern digital approach to the kinds of sounds you’d expect to hear from an Aphex Aural Exciter processor, or the old ‘Dolby A trick’ – a processing option which used the Dolby A noise-reduction encoder to enhance the top end of a recording, creating a sense of more air and clarity.

Sugar starts with these sounds, and opens up the creative options available to the mix engineer, with control over four frequency bands, each with two distinct tonal colour alternatives. Furthermore, Sugar also has high- and low-pass filtering built-in, as well as a saturation circuit with drive, distort and crush settings for everything from a little touch of tube drive to rip-roaring mayhem. 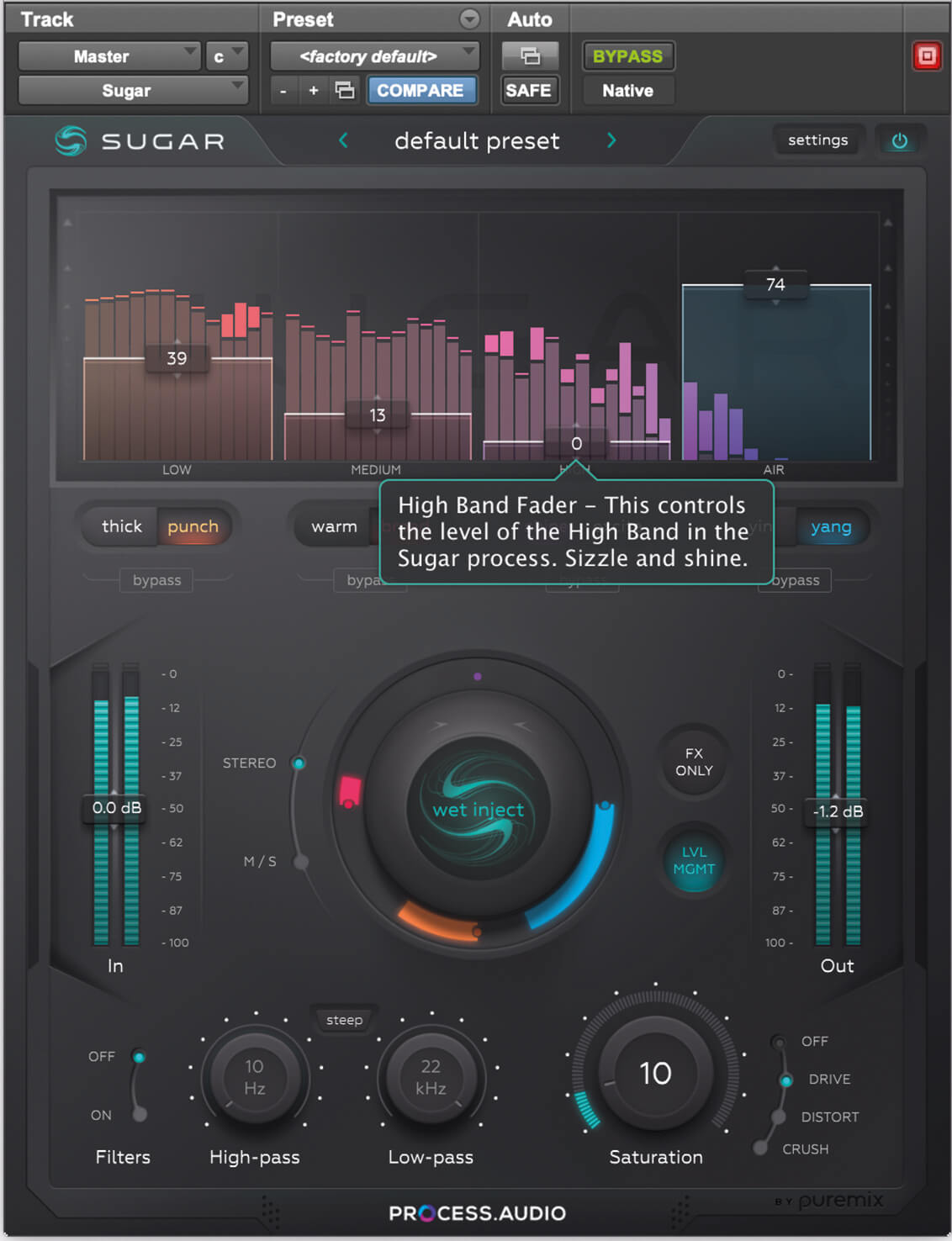 A spoonful of Sugar

Opening up the plug-in for the first time reveals a fairly simple design, with four sliders corresponding to each of the four frequency bands (low, medium, high and air) – although there’s no real indication as to where exactly the crossovers for each band is set.

Under this, each band has two colours, with enigmatic names: Punch, Warm, Shine and, bizarrely, Yin and Yang. In this respect, Sugar is reminiscent of Kush Audio tools, such as the Clariphonic, urging users to use their ears rather than their eyes to mix. While this can be creatively useful, it is important not to take these descriptive terms too literally. Because of the trickiness in using terms like these to describe music, it can also lead you in the wrong direction.

For instance, if you think you need a track to be more exciting and instinctively reach for the ‘Excite’ band, perhaps what was really needed was more aggression in the low end rather than the high end. With more experience using Sugar, this is sure to become less of an issue. Users will no doubt come to regard these words with the vague guidance they were no doubt intended to provide.

Dialling up any of these four bands dials in the processed signal. This works in parallel with the dry signal, which is always present in the output, so your signal level is always increased by using Sugar. This can be compensated for, with the output fader, or by using the handy LVL MGMT button, which automatically brings the fader down as you turn up each of the frequency bands. We’ve already created our own default preset for Sugar, which has the LVL MGMT engaged from the beginning, as it seems likely we’re always going to process with this engaged.

In the centre of the user interface is a single large Wet Inject dial, with four colour bands emanating out like streamers. These bands are just another visualisation of the four frequency bands at the top, but the Wet Inject dial enables you to control all four bands at once, dialling them all up or down as if you were controlling them with a VCA. Used with the LVL MGMT button, this can be very useful for seeing quite how much or how little is needed to really sweeten your tracks.

On stereo channels, Sugar defaults to apply equal amounts of processing to the left and right channels, with no dual-mono option short of using separate left and right instances of the plug-in. However, it is possible to switch into Mid-Side mode, which splits the four frequency bands in two, with separate Mid and Side controls for each band. This can be great when working on a full mix for dialling in low end just to the centre, while enhancing the top-end with additional width.

Because Sugar generates additional energy, particularly in the low end, it can be useful to temper this with a little filtering. Sugar has built-in sweepable 12dB/octave high- and low-pass filters, with an option to engage steeper 48dB/octave filters. In our experimentation with the plug-in, we found ourselves only ever occasionally engaging these, and only subtly dialling out a little sub frequency, never low-passing the highs. But there’s no harm in having it there, and it could come in useful for some specific sound-design purposes.

Finally, Sugar has a saturation knob, which lets you dial in a little additional harmonic distortion. This dial can get cruel quickly, but set to the Drive position and with only a little dialled in, can bring that little something special to a signal, in much the same way as a good tube or tape simulator might.

Pour some sugar on me

The tools which inspired Sugar were used on all sorts of signal sources, with results that almost always sounded larger than life – and Sugar really nails that vibe. We managed to create some wonderfully large vocal sounds, turning even weak male vocalists into powerful parts of the mix.

Across drums, Sugar can add a lot of excitement, bringing punch and sizzle exactly where it’s needed, but one of the surprising elements was how useful we found Sugar when used subtly across a mix buss. One of our favourite processing methods using Sugar has been to route all the instruments in a mix to one instance, and all the vocals to another, blending the two enhance signals in the final mix buss. Seemingly, whatever sound we threw at it ended up enjoying a liberal sprinkling of the effect.

Even for mix engineers, sonic enhancers are not exactly a must-have tool. They can be easily overused, resulting in overly distorted final mixes. But used subtly and on the right sources, they can really help to bring sounds to life. Sugar is very easy to use, and sounds great. If you don’t have anything in this category in your arsenal, it is pretty much a no-brainer. 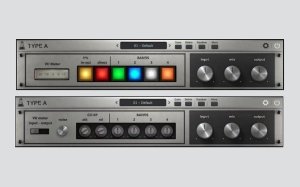 If you’re looking for a more faithful recreation of the Dolby A trick, AudioThing’s Type A plug-in is just that – a straight emulation of the Type A encoder first found in the Dolby A301. 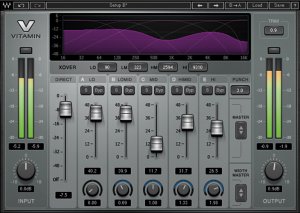 As well as having its own emulation of the Aphex Aural Exciter, Waves has a multi-band sonic enhancer, which can be used in a very similar manner to Sugar. Vitamin has five bands, with variable crossovers and control over the stereo width on each band, plus an additional punch control.