A solid chord progression can enhance even the simplest of tracks and turn them into something truly magical. This Scaler sequel from Brighton’s Plugin Boutique is here to make your harmonies shine. 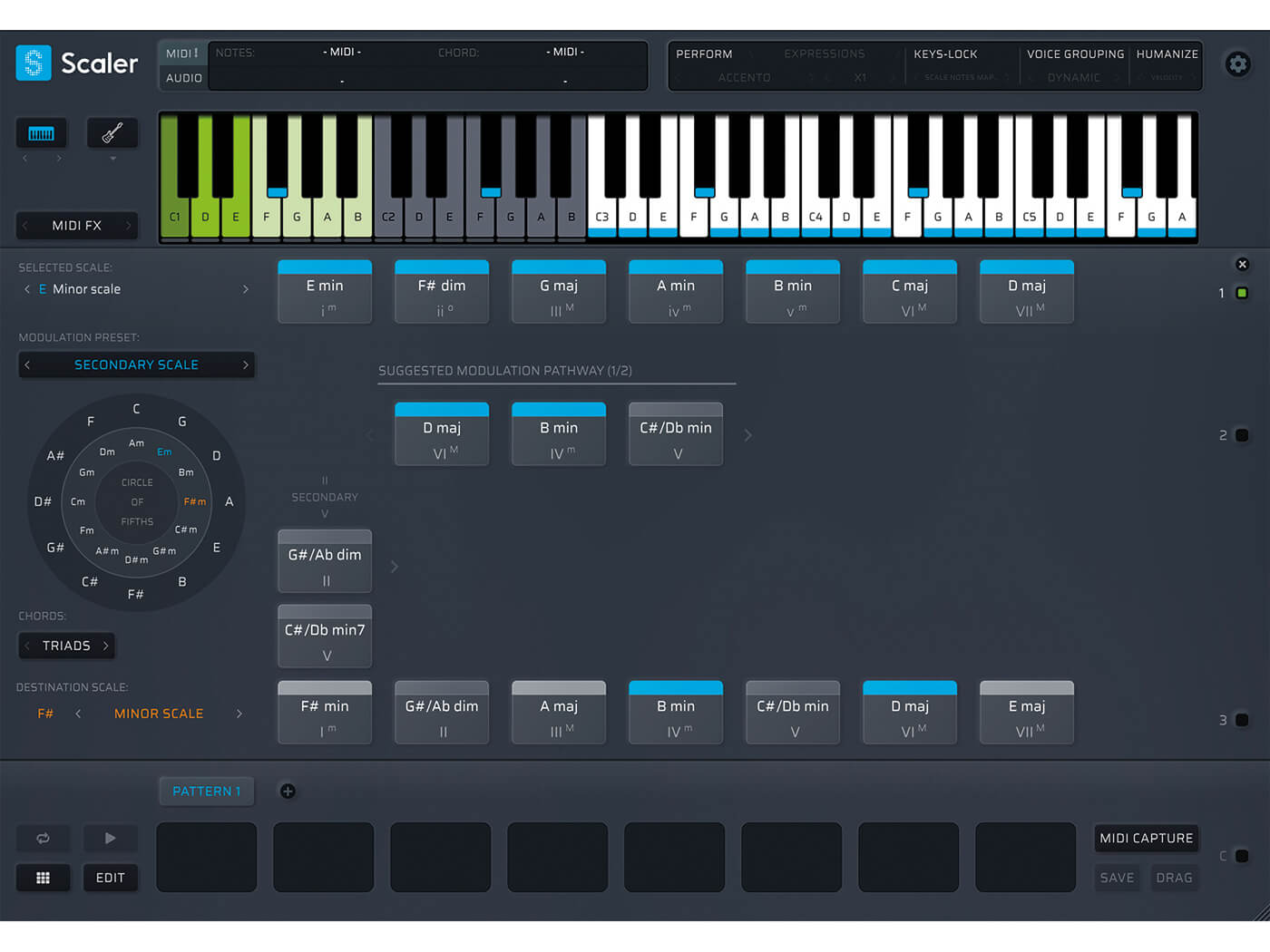 The market is awash with composition-aiding tools at the moment. Whether you’re a beginner who wants help creating a whole song or a more experienced composer looking for a flexible writing partner, there are plenty of options available. We were impressed by the original Scaler in 2018. Its layout and large chord-progression library were fantastic but it felt to us like the plug-in had more to give. Though there have been multiple updates that have expanded Scaler’s features since its release, this new sequel takes things further with more sounds, more progressions and some killer new workflow improvements. Has Brighton-based Plugin Boutique finally managed to build the ultimate composition assistant?

Scaler 2 allows you to load preset progressions, detect chords from audio and MIDI, and build and edit your own chord sets. To cover all bases and DAWs, it comes in three plug-in versions. The main one loads as a virtual instrument and can detect from audio and MIDI, and control external instruments. The ScalerControl version can be used as an AU MIDI effects plug-in in programs such as Logic, where external control works differently. Finally, there’s the ScalerAudio version, which can be placed on audio tracks for quickly analysing audio content.

When installing, you have the option to include 492MB of extra sounds, which takes the total install to just under 1GB. There are now 33 internal sounds, which may not sound like a lot but the quality of these remains impressively high. Expect felt pianos, tech synths, house plucks, acoustic guitars and deep pads, as well as a choir and several orchestral ensembles. It’s a shame there’s no editing, as even simple controls for the decay time and reverb amount would add additional and very welcome flexibility.

Still, we’d happily use these sounds in our tracks, and it’s nice to have some varied inspirations when building your progressions. You can also route MIDI-out to control an instrument of your choice, the technique for which will depend on your DAW – thankfully there’s an extensive video manual on YouTube that shows you how to do this and more. 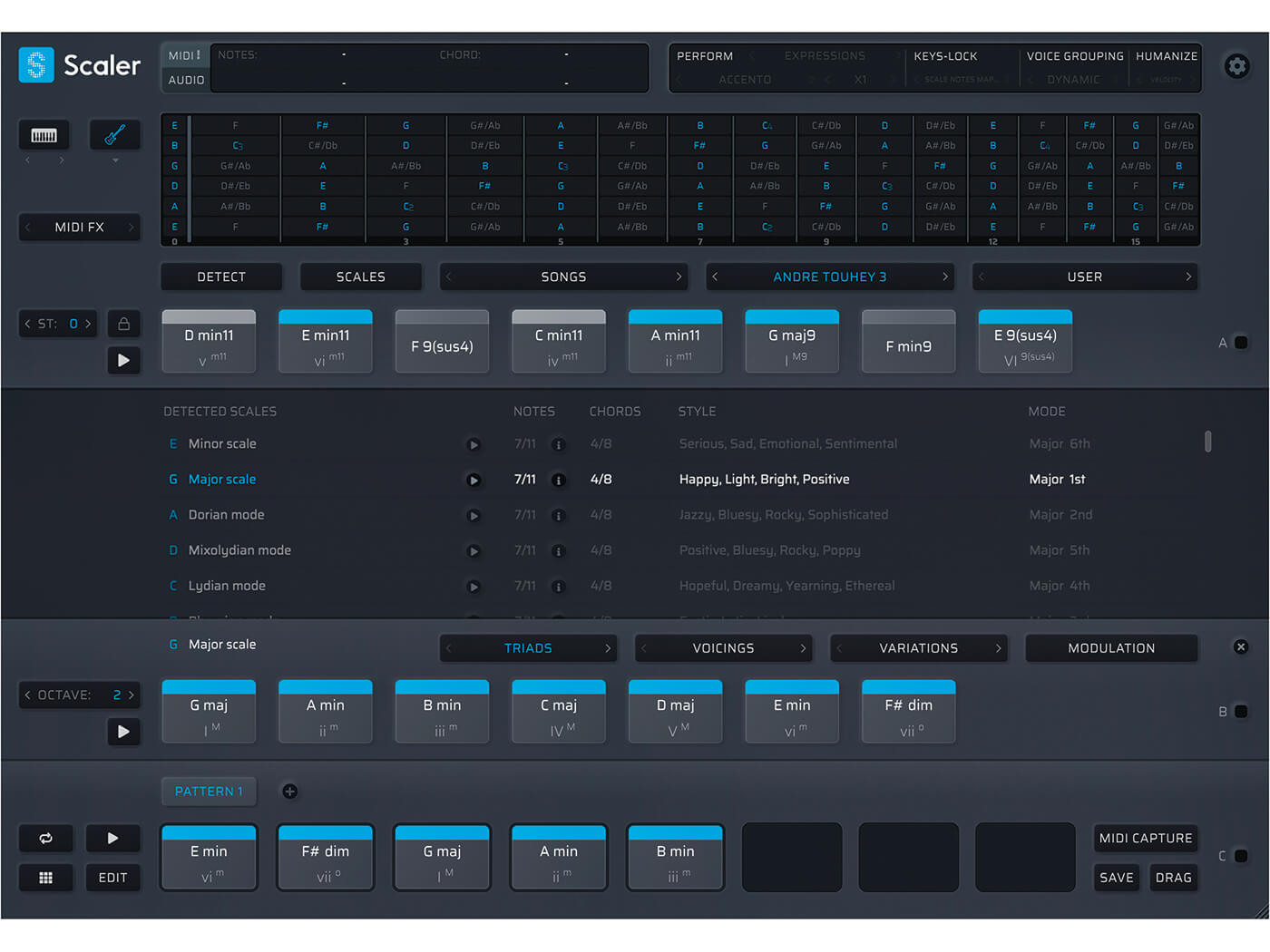 Scaler 2’s GUI is similar to that of its predecessor. This time around though, Plugin Boutique seems to have embraced flat design, which, for our tastes at least, makes Scaler 2 easier on the eye than its ancestor. Chords are presented as clear squares that play when pressed, and you can choose between a keyboard or guitar fretboard view at the top. There’s a built-in arpeggiator with which to add detail, alongside a strumming mode that allows for different speeds and directions of strumming.

The fantastic new Expressions captures the essence of a musicians’ playing and then adds it to the chord. There are a large number of performances, melodic phrases and chord rhythms that can breathe life into static progressions in an instant. You can also humanise the sounds by tweaking the velocity and timing and adding randomisation. This setting currently exists as a simple on/off function but we can confirm that a sliding scale is in the works. If you select one of the more delicate-sounding presets such as the soft piano, and then humanise the performance, you’ll be greeted by beautiful and expressive phrases at the touch of a button.

To build a new progression, begin by selecting from a long list of traditional and exotic scales, each with a helpful description and audio examples, and a search function to help narrow down your selection. You’re then presented with a list of possible chords that can be dragged to the bottom where you build your progression. Alternatively, you can choose from a massive list of more than 400 song and artist chord sets in a variety of genres.

There are also options to switch to extended chords and for different voicing and variations. New to Scaler 2, there’s also the Modulation page. This nifty section lets you choose a target scale from the circle of fifths, then displays a modulation path that tells you how to get there from your selected scale. There are also secondary scale, modal interchange and mediants functions.

Once you’ve built your chord progression, navigate to the edit page to further tweak its structure, as well as its playback timings. From here, you can also switch the performance, arp and strumming modes for each chord. It’s an extensive system that offers multiple ways to refine and personalise MIDI performances.

If you want to perform the chords yourself, make use of the Bind system, which lets you select different rows of chords from the interface to send them to the MIDI keyboard. These are shown at the top as greyed-out keys, so you can play whole chords with one key and then melodies on top. You can create up to seven patterns at the bottom, and there’s also a new Chord Pads page that displays them all in rows.

Here, you also have keyswitches to flick between each pattern, which means you can build complex performance kits of chords. Scaler 2 will sync to the host, so you could simply build a pattern using one of the built-in sounds and have it play in time with the rest of your DAW project, for example. Perhaps a more useful way of working though, is to drag the MIDI straight over to the DAW. You can click and drag any chord square to copy that chord (including its performance settings) as a MIDI pattern or you can click the Capture Performance button and any played MIDI will be turned into a MIDI file ready to be imported elsewhere. 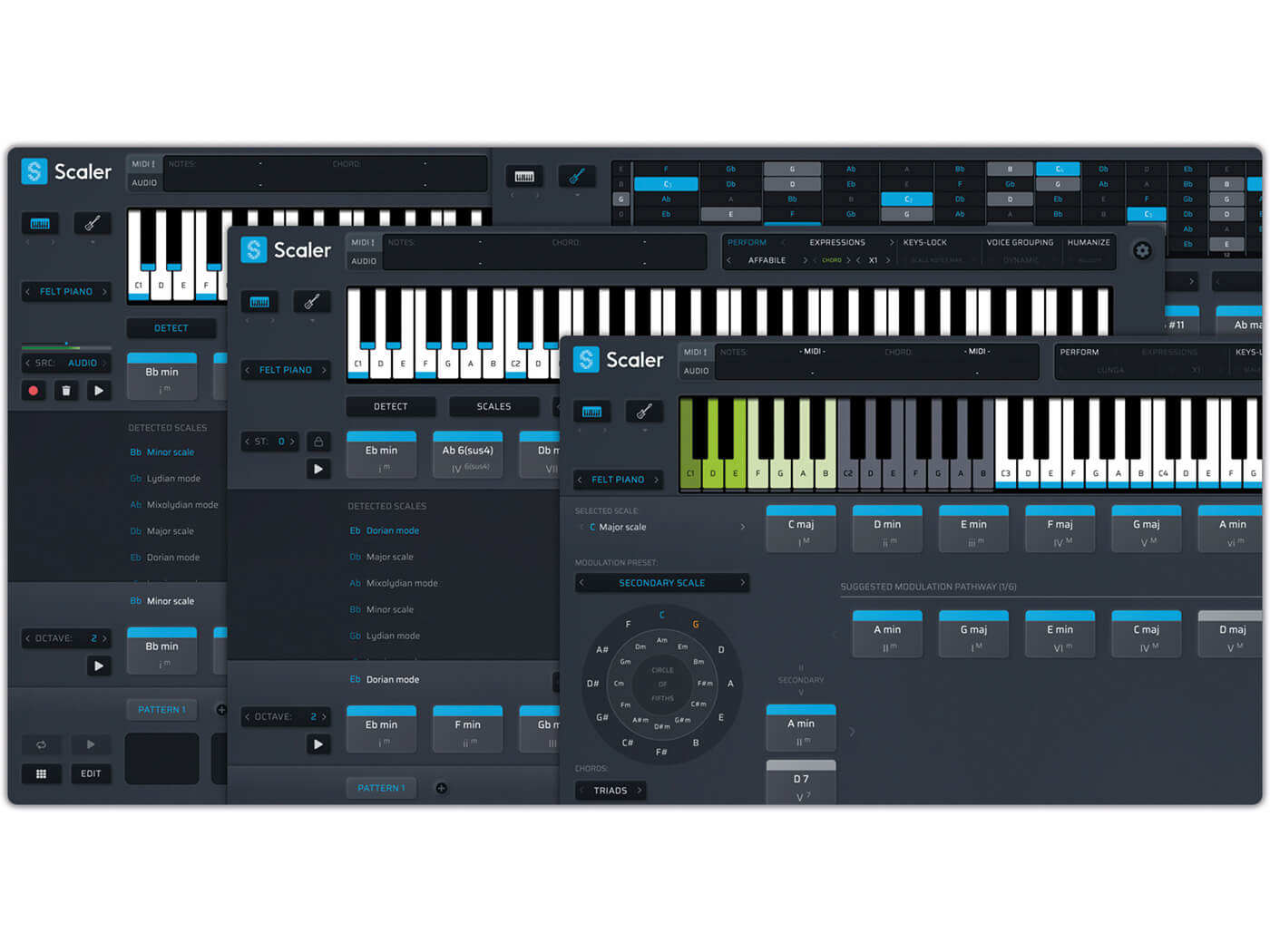 Another option for building chord progressions involves capturing incoming MIDI or audio, which Scaler will analyse and present as a chord list alongside other chords in the scale, as well as compatible alternatives. This works like a charm with MIDI input but we tested a variety of audio files (some clean, some more complex) and had mixed results. We even tried the same jazz piano Apple Loop as both MIDI and audio and Scaler 2 spat out different results. This facet of the plug-in is practically the only part that didn’t impress us. It is, however, an area that developers Plugin Boutique are still working on.

Scaler 2 is a comprehensive toolkit for working with chords, and a fine enhancement on its already impressive predecessor. There are subtle improvements across the board, including Keys Lock, which ensures all notes played are in key, and Voice Grouping, which helps prevent big interval jumps between chords. It builds on the original plug-in with a slicker GUI and useful new features. Best of all is that it encourages users to explore and learn more about music theory as they knock out commanding chordal patterns. 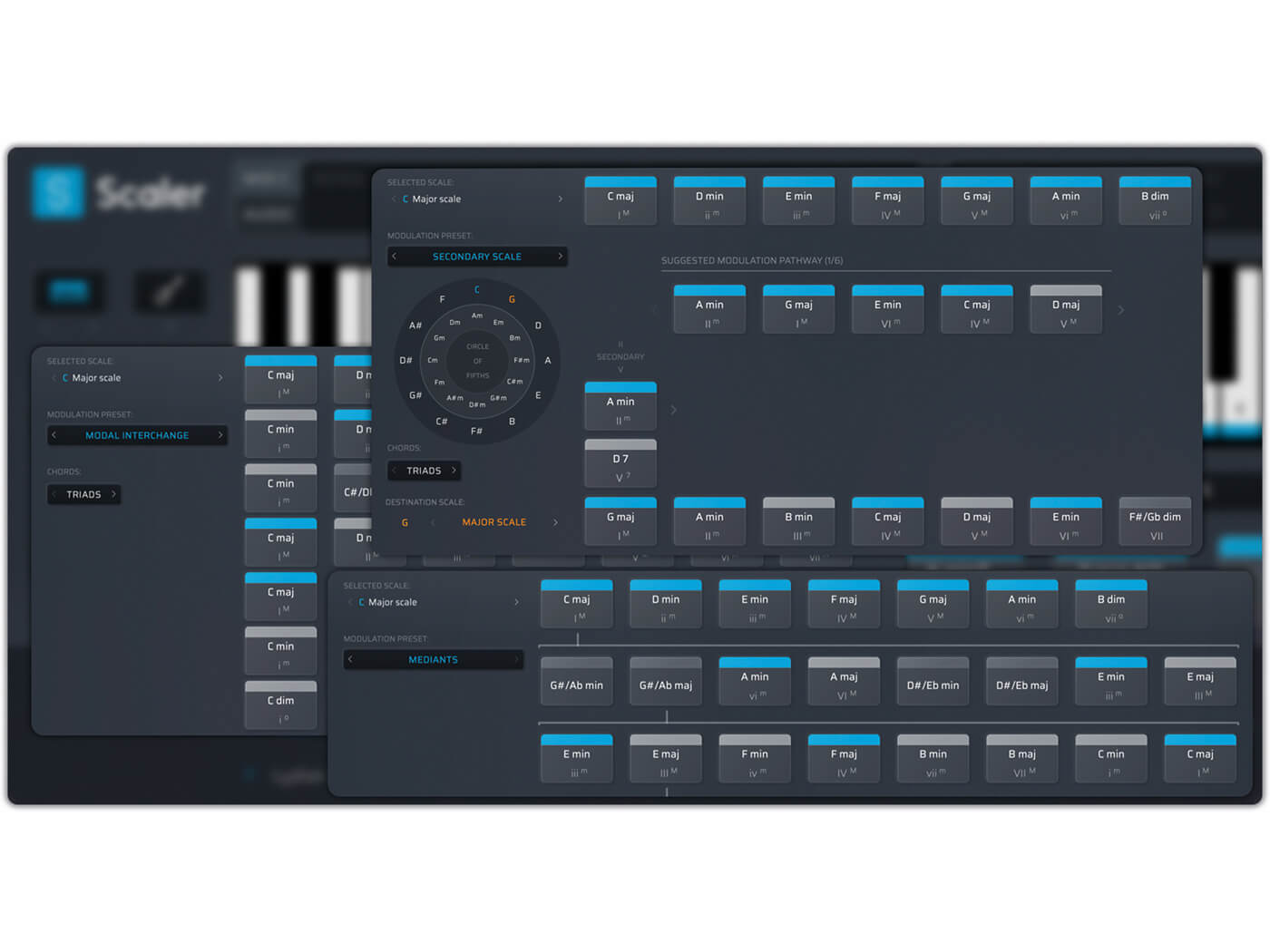 If you struggle to come up with convincing and compelling chord progressions or are stuck reaching for the same stale old chords, Scaler 2 could be a godsend. Whether you’re looking to use its massive preset chord-progression library for inspiration or want to delve more deeply into developing your own chords using variations and complex modulations, Scaler 2 can streamline your workflows in all manner of ways.

As with any form of music theory, you have to be patient to get the most out of it. But Scaler 2 has extensive features that can help both beginners and more experienced composers of any genre write more thoughtful music. It could also be of added use to film and TV composers that want a quick list of chords that evoke particular places and times. 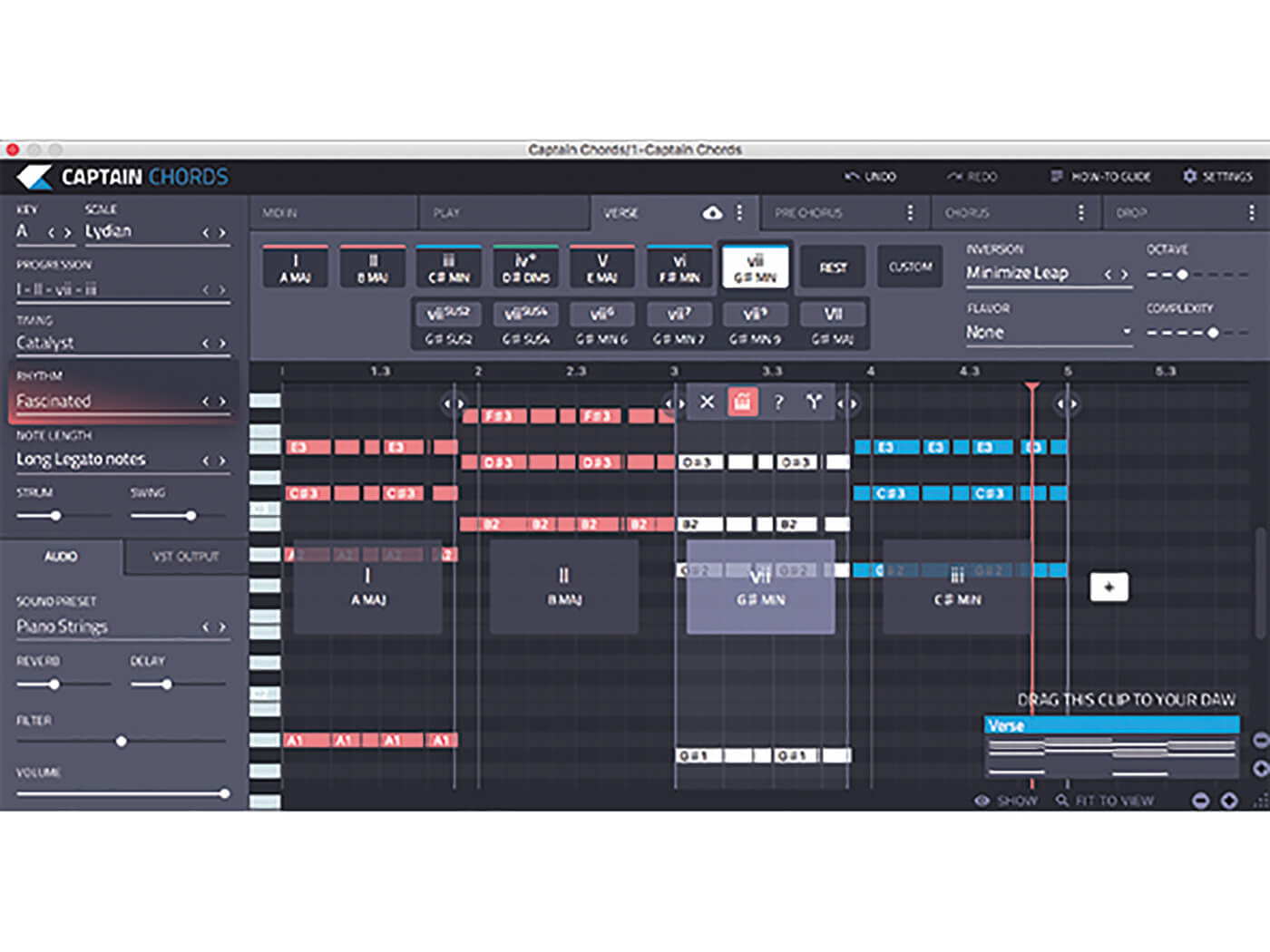 This plug-in suite offers some clever connectivity for writing chord progressions, melodies and basslines, and comes with an excellent library of built-in sounds. However, Scaler is faster and more intuitive for pure chord creation, and features more presets. 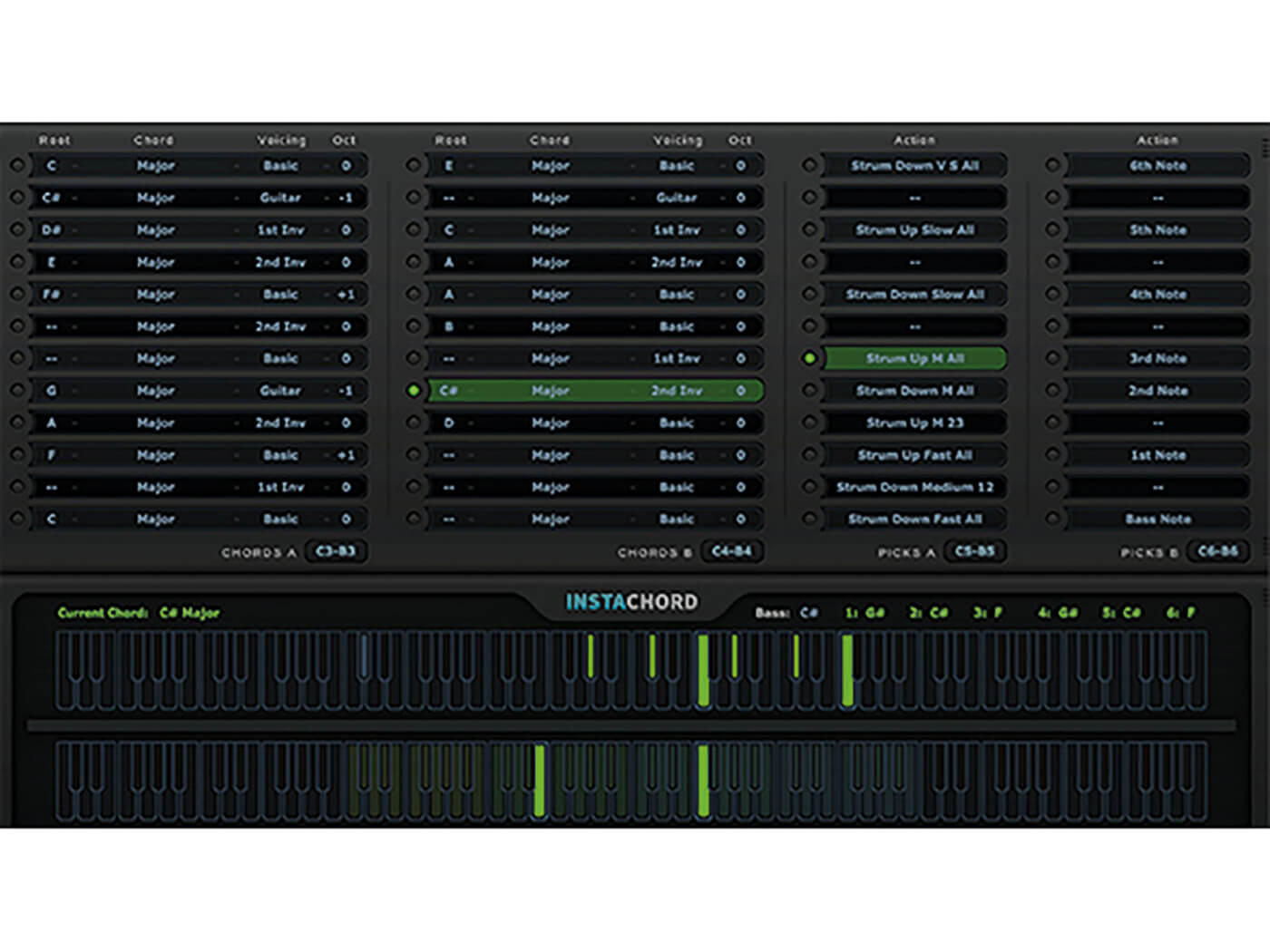 Though it shares some similarities to Scaler 2 and helps you build rich chord progressions with ease, InstaChord is less intuitive and flexible. It does boast some smart performance features though.