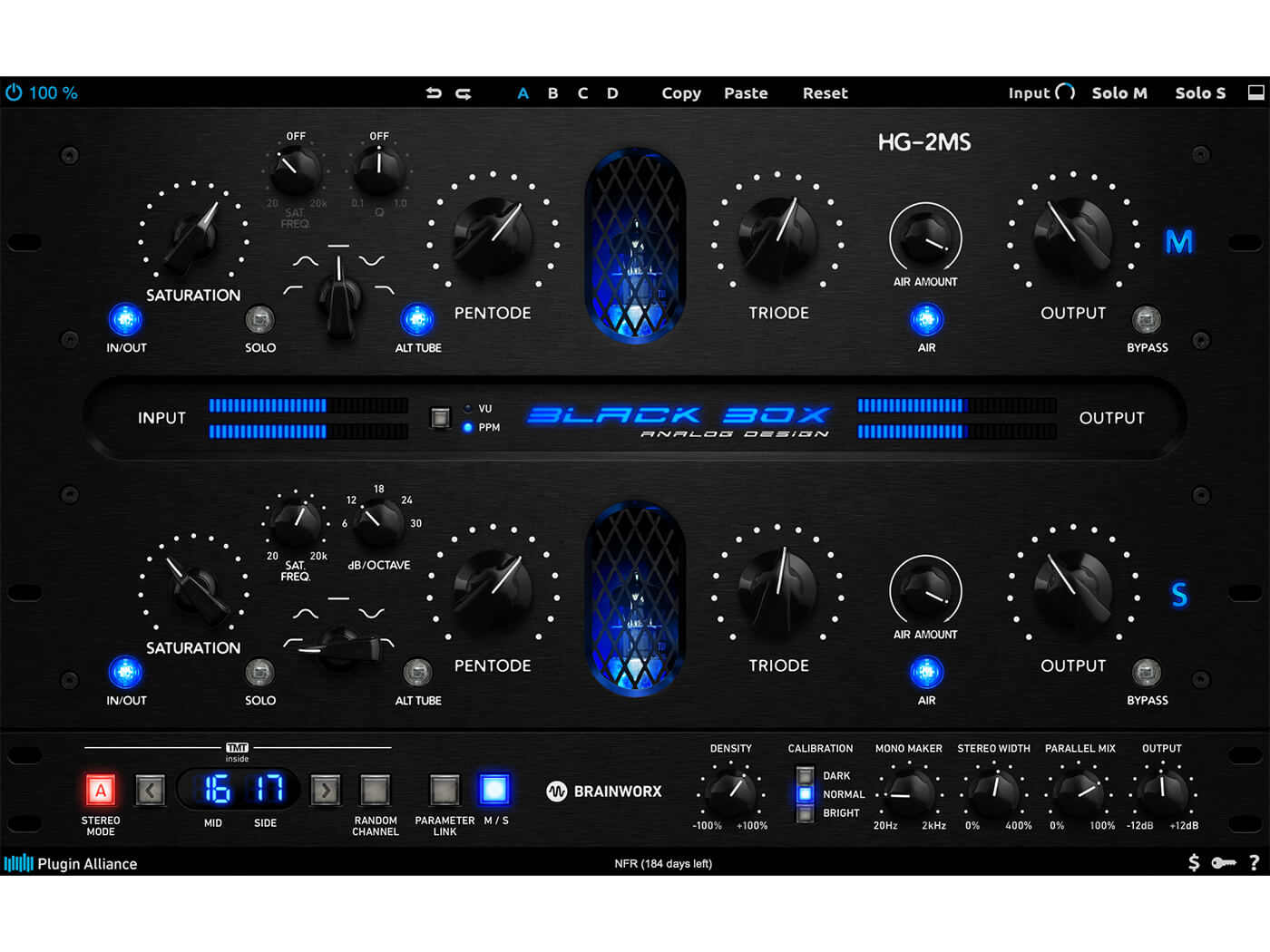 A couple of years ago, Brainworx and Plugin Alliance released a software version of the Black Box HG-2 saturator to widespread critical acclaim. Rather than rest on their laurels, the prolific developers have once again teamed up with Black Box’s engineers to produce a new version with M/S processing and a plethora of new features. This analogue warming plug-in includes four different vacuum tube stages combined in parallel and series to provide rich and varied harmonics. It is especially adept at adding warmth, mass and volume to mixes and instruments while retaining punch, and now it has a few more tricks up its sleeve. So, what are they? And are they worth the upgrade?

At the centre of the Black Box sound is the emulated 6U8A pentode and triode tubes that run in series. You can drive these using the main dials or adjust the Density control, which pushes both tubes harder into saturation while retaining the output level. There’s also an Air dial for adding silky, high-frequency dust and a parallel saturator with two modelled 12AX7 tubes for extra targeted drive and distortion.

The original plug-in had low, flat and high settings for parallel saturation. This update is expanded with five filter options: flat, low-pass, high-pass, bandpass, and bandstop with additional frequency and Q/slope controls. You can solo the signal to target saturation on a specific part of the mix, which dramatically increases the flexibility and variety of sounds you can create. Want to add some thickness to the low-end? No problem, just use the LPF to roll off the tops. Want to saturate a drum bus but avoid harshness from the cymbals? Just fine-tune the bandstop, so you thicken everything but the resonant area. You could even use it for special effects like automating a super smooth filter sweep.

Of course, the MS in the title is a giveaway for the other major difference in this version. You now have two sets of controls that you can switch from Left/Right operation to Middle and Sides, plus the ability to link or unlink them. This deepens the control you have for targeting the processing where it’s most needed. An obvious use is to push some extra brightness and air to the sides to make the mix feel wider, but you could also use it to reduce width and add some centre focus.

Another new feature is the addition of Brainworx Audio’s Tolerance Modeling Technology (TMT). With analogue hardware, every component has tolerances, leading to subtle differences between units coming off the assembly line. Here, the developers have modelled these tolerances allowing semi-random variations of the emulation, so you could have different units on the mid and sides, and can flick through to find ones that work best with your material. It’s very subtle but a nice touch. 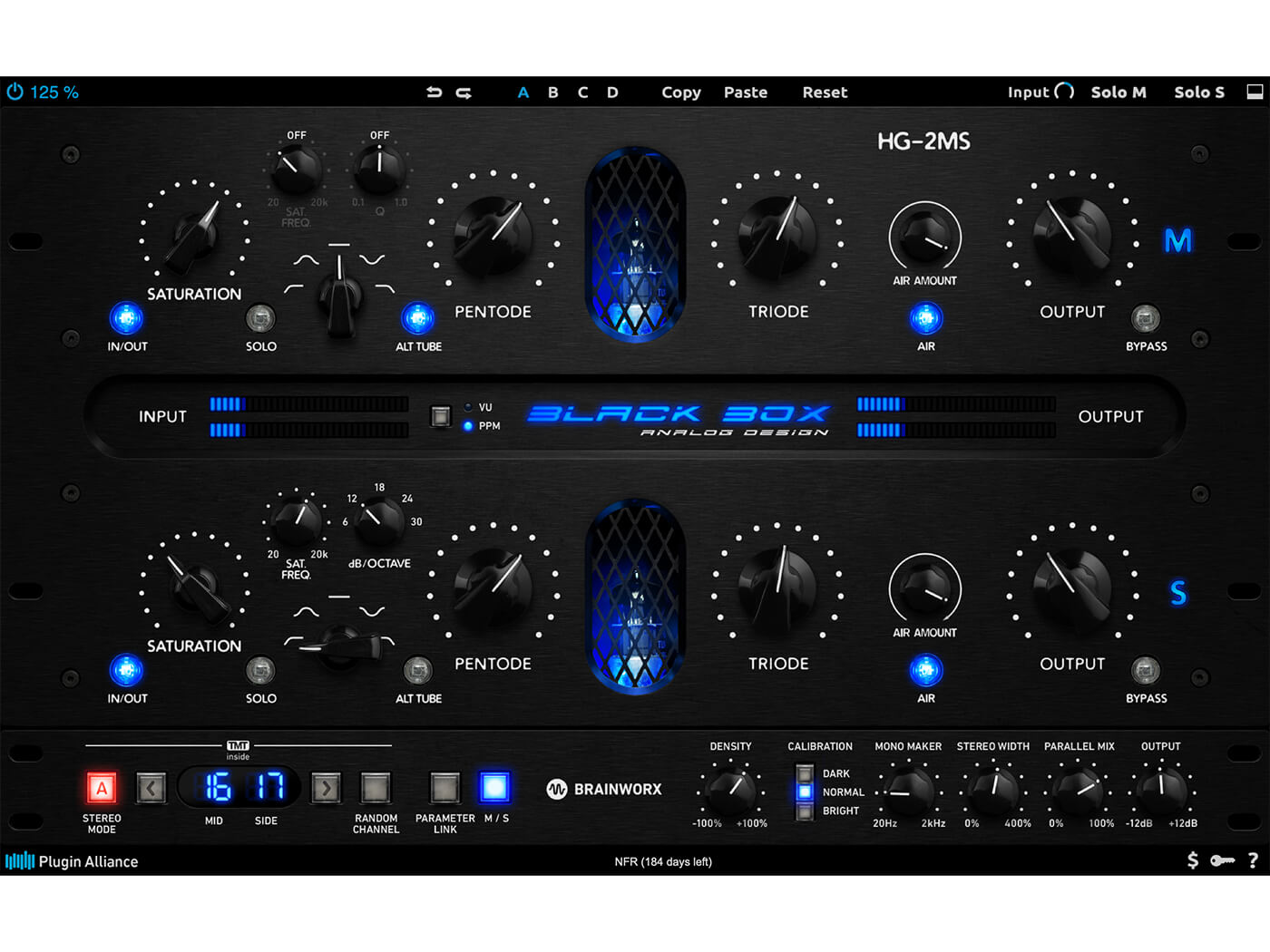 It doesn’t end there, though. You also get new Mono Maker and Stereo Width dials, a wet/dry control, M and S solo buttons, and new Input and Output controls. The Output helps make level matching a bit easier, and although there’s no built-in gain compensation, you can hold shift (CMD on Mac) when you adjust the Pentode or Triode dials, and it will inversely affect the output. In short, it has the original’s beautiful analogue sound but with the controls and features dialled up to 11. Our only minor gripe is that the In/Out metering is harder to gauge as they now sit on the left and right, rather than side-by-side, as in the previous version.

Where the original Black Box HG-2 plug-in copied the hardware unit and added a few useful touches, this new version takes things much further. It is an excellent example of what happens when a developer expands beyond the limits of hardware emulation. There’s no denying the price is quite steep, but as with all Plugin Alliance software, you can pick it up for much cheaper in the regular sales or as part of the subscription bundle. The HG-2MS is a swiss-army knife of colouration, and if we were forced to pick one desert island plug-in for analogue saturation duties, this would be it.