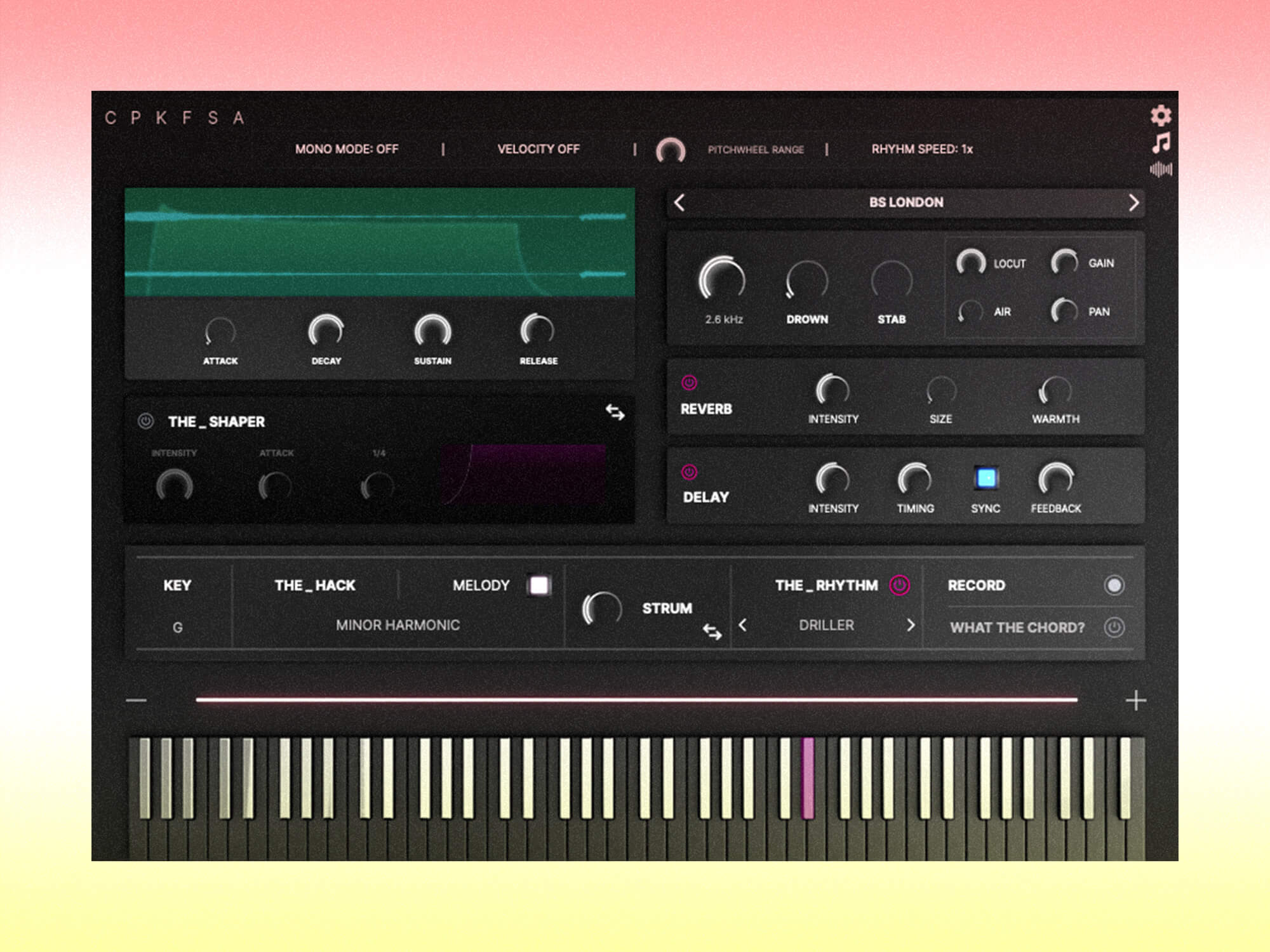 We’ve seen an increase in smart composition tools in recent years, with features that help you compose new rhythms, melodies and chord progressions at the click of a button. THE_INSTRUMENT is a new plugin from producer Phil Speiser that looks to combine these tools with a sample instrument in a single, easy-to-use package. There are a few areas where the plugin could be improved, but the real selling point here is the rapid workflow.

The full install currently weighs in at around 3.6 GB but you get lifetime free sound updates with more sounds and MIDI to be added over time. The GUI isn’t anything to write home about, but it’s clean and functional.

There’s an amp envelope with an accompanying ADSR graph that superimposes an oscilloscope when a sound is playing. On the right, there’s a low-pass filter, a LOCUT dial (up to 250Hz), an AIR dial that adds some sizzle, plus gain and pan controls. There’s also a Stab dial that adds tempo-synced filter modulation (locked at 16ths), and a useful and unique dial called Drown, which filters the lows and highs and adds a touch of saturation. This can be used to push sounds further back into the mix, however, we encountered some clicking on certain patches when we swept the dial using the Audio Unit version. We expect that Speiser can fix this with a simple bug fix in a later update. 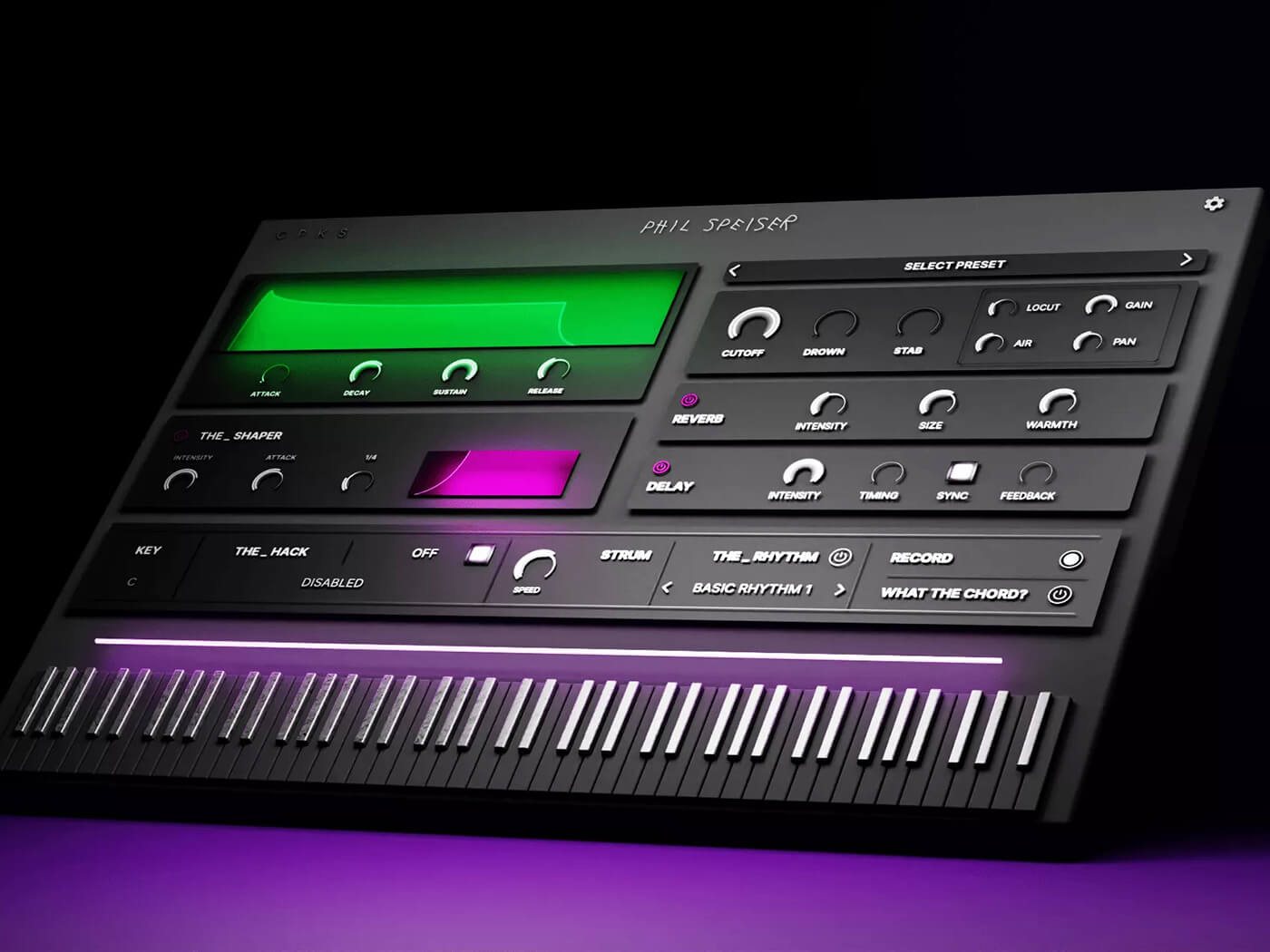 The sound design continues with simple but effective reverb and delay effects, and a built-in sidechain style ducker called THE_SHAPE. Plus, a filter sweep effect can be set to one-shot or loop modes. It’s nice to have built-in ducking, even if it’s fixed on simple bar subdivisions.

However, the filter feels a little limiting. In fact, the controls throughout THE_INSTRUMENT have been simplified to make it quick and intuitive to use, but there are areas where a few extra parameters would make it much more flexible. It feels like just having a filter with its own ADSR and LFO would still be quite simple, but would add an extra layer of control. Likewise, being able to filter the lows from the reverb tail, or choose a stereo delay with filtering could help with cleaning up the sounds.

Speaking of which, the 100 or so included sounds are a mixed bag, with some decent, production-ready patches alongside some that are a little weaker. There’s a fair amount of variation, with a mix of familiar-sounding pads, synths, plucks, basses, leads, keys and 808s, alongside some slightly more interesting and edgier sounds.

Our main issue is that once you start layering multiple instances, you start to get quite a lot of build-up in the low-mids and not enough brightness. The LOCUT and AIR dials slightly help, but having adjustable low and high shelves would be much more useful for tailoring the sounds. Obviously, you can EQ them using different plugins within your DAW, but it would be nice if some of the raw sounds had a little more bite. The website makes promises of new Sound, Chord and Rhythm updates over time so hopefully, the palette will be expanded.

In fairness, Speiser seems to be fairly responsive online, often replying to comments and asking what kinds of sounds users would like included, so some decent updates should be incoming. The number one feature request will no doubt be the ability to import one-shot samples though. If this was possible, then it would immensely open up the scope of the instrument as you could use the excellent, real-time composition tools with your own sounds.

It’s these useful writing tools where THE_INSTRUMENT really shines. At its simplest, you can choose a key and scale then set it so that any press on the keyboard will remain in the correct key. There’s also a chord detection mode, which is handy for when you’ve already started a track and want to know what key it’s in. Beyond this, you have the excellent Chord mode that includes a wealth of chord sets in dance, pop, neo-soul, hip-hop, and more styles. These can be embellished with a Strum effect and a basic arpeggiator, although the arp doesn’t sync to the DAW downbeat, which makes it hard to play in time.

The next section is called THE_RHYTHM, and features a large number of basic rhythms, bassline and melody patterns, chord rhythms, sequences and chord progressions. Whether you use these or not, it’s a good way to test out different ideas and riffs that you might not ordinarily come up with. The final part is a Melody Generator, which will create endless new melodies at the push of a button. These can be previewed and then dragged and dropped into your DAW for further editing.

Any of the MIDI generated can be captured via a Record button and dragged over so you can further tweak it or even use the pattern with a different instrument. In response to user feedback, Speiser has released an update that adds realtime MIDI out, and also a separate MIDI effects plug-in version for Logic Pro. These are excellent additions, as it means you can now drive your own softsynths and instruments using these useful composition tools.

There may be some who will look down on the use of compositional aids like these and suggest you learn music theory instead. Of course, it would be better to learn fully and have that knowledge, but these tools have the potential to help teach theory, and put a broad spectrum of chord progressions at your fingertips.

Ultimately, it will still take skill and creativity to develop these parts into a full track – and if it means that there’s more music out there that breaks out from using obvious and more predictable progressions, then that can’t be a bad thing. If you’re after slightly more complex and powerful composition tools, then something like Plugin Boutique’s Scaler, or Mixed in Key’s Captain range of plugins could be a good option. However, THE_INSTRUMENT manages to distil some of the functions from those plugins into something a little more immediate and fun, so it will depend on your workflow.

Overall, THE_INSTRUcome upMENT is a promising idea-starting tool with a considered workflow. In use, it helps us conjure ideas we would never have thought of, and it could be a useful way to beat writer’s block. The best ideas will still require skill to develop and there are a few areas where the plugin could see some improvements, but if you’re stuck in a rut, then you might get a lot more out of this rather than purchasing your umpteenth saturation effect. It’s fair to say it will probably be more useful for writing electronic, pop, hip-hop and trap-style genres, but there’s scope for it to work with many other genres.