The sword-sharp ingenuity of Muramasa’s clever algorithmic features is somewhat blunted by the plug-in’s unwieldy resource usage. Is its undeniable power enough to overcome its faults? 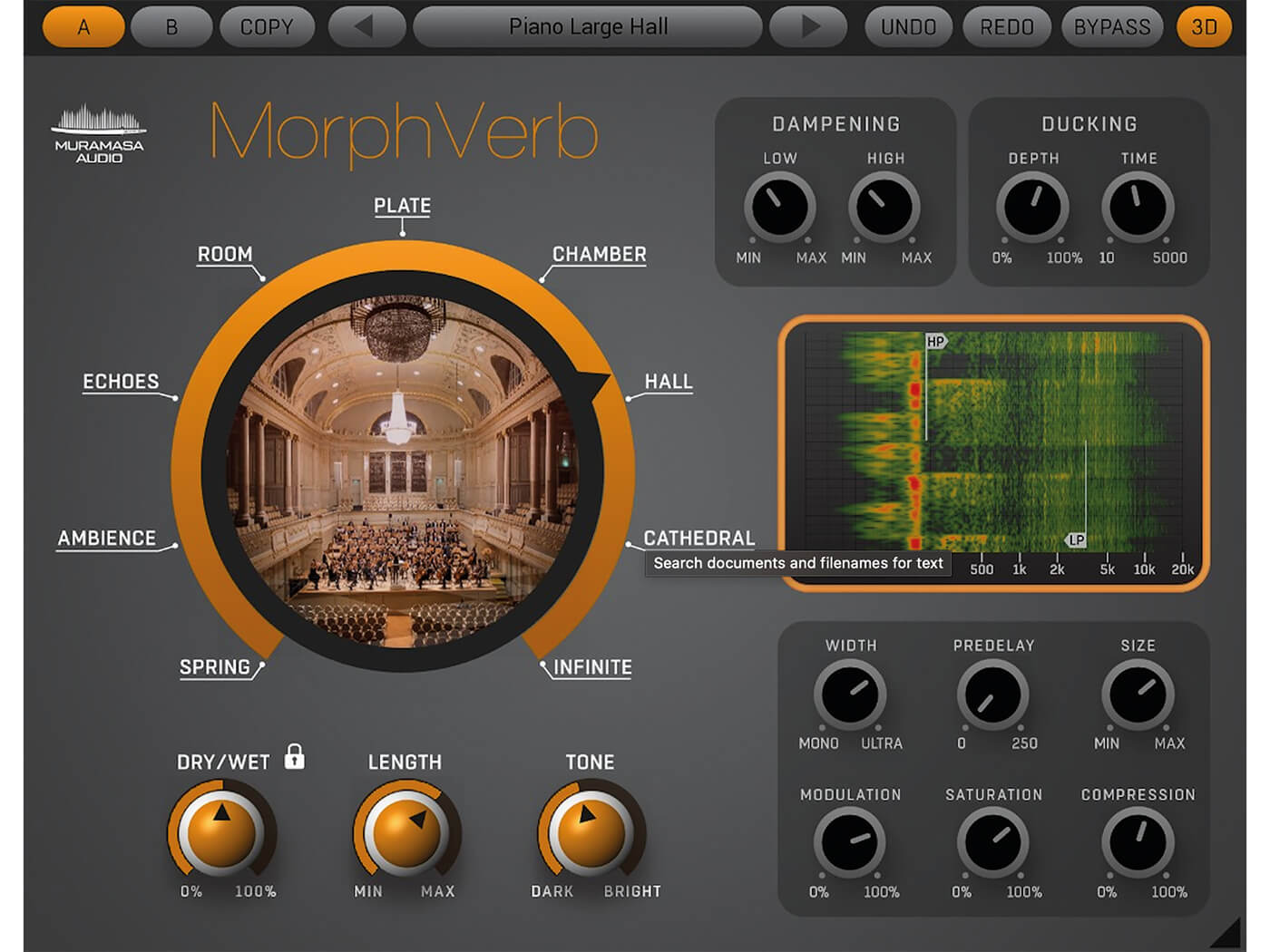 Reverb can add life, space, depth and colour to sounds. It can be perform as an integral part of already characterful elements, enhancing the tail on a snare drum or filling out the sound of a synth pad. In the early days of recording, reverb was generated by playing a sound through a speaker in a room, and using mics to capture the resulting sound.

With this sort of reverb chamber, if you wanted to alter how the reverb sounded, you had to move the speaker and mics around, and introduce baffles, but, with this rudimentary method, you could not change the fundamental characteristics of the room. The first artificial reverbs (plates and springs) were a little more flexible. But it wasn’t until the invention of digital delay that we could create different reverb types, such as halls, chambers, rooms and plates, from a single processor.

These days, we’re spoilt for choice, and this can make it challenging to choose the right reverb type and dial in the best settings to perfectly blend its sound into your mix. MorphVerb, a new plug-in from boutique developers Muramasa Audio – represented by the Prague-based audio-brand alliance United Plugins – is set to take some of the pain out of these painstaking decisions. 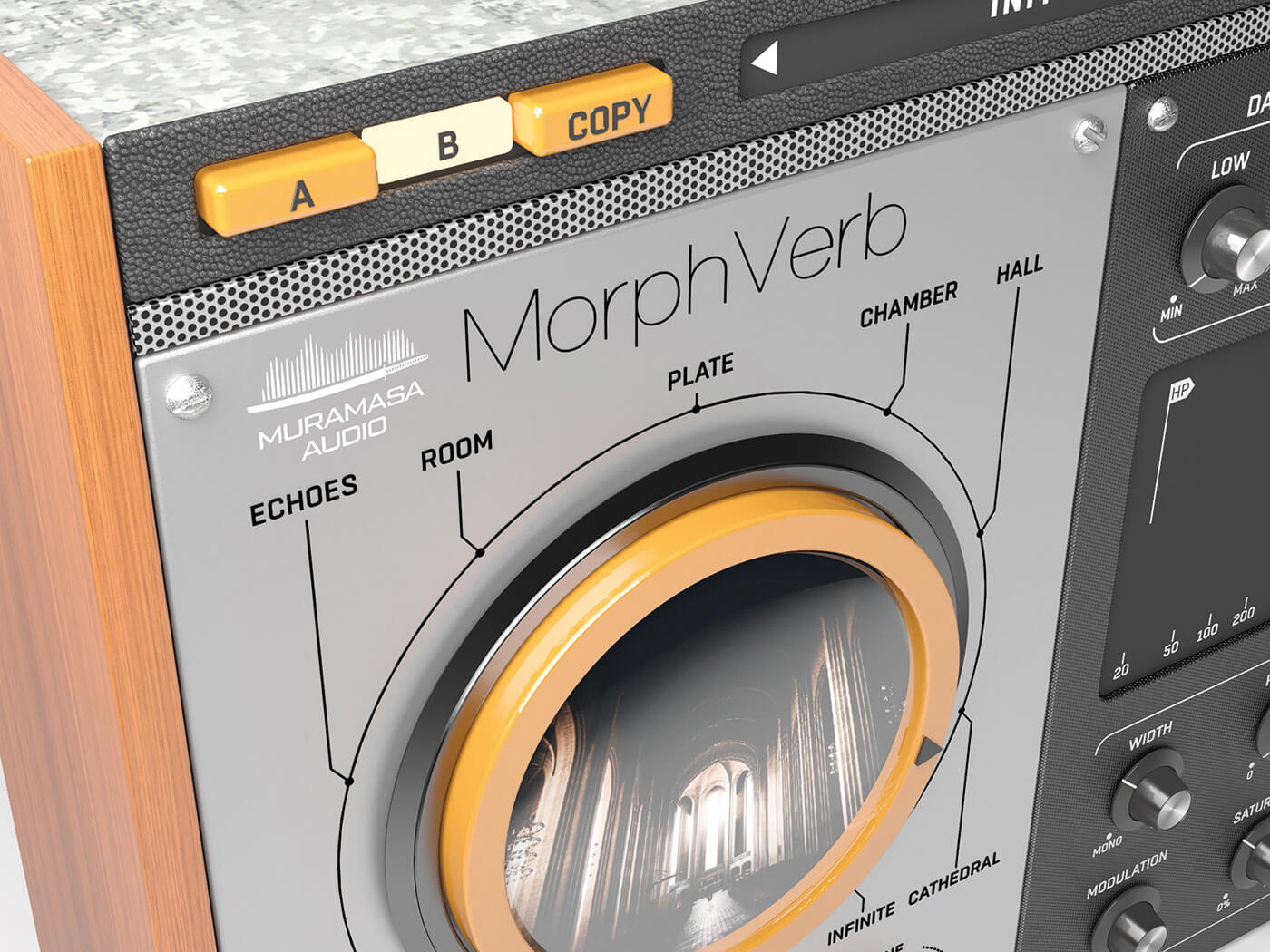 Like many other digital reverbs, MorphVerb offers a selection of reverb algorithms, each tuned to simulate a different acoustic space or reverb style. The plug-in’s most impressive feature, though, is its ability to morph between these different algorithms, thereby giving a near-infinite variety of room types to use as the basis for a given reverb. Not only is this a standout concept, it also stands out on the plug-in’s user interface, about half of which is dominated by the large dial with which you can select and morph the reverb algorithm. (That interface, by the way, is fully resizable, and can be flipped between a 3D skeuomorphic and a flat 2D design.)

The dial is surrounded by nine labels, each corresponding to a specific reverb algorithm. Running clockwise, these are spring, ambience, echoes, room, plate, chamber, hall, cathedral, and infinite. Clicking on an algorithm name snaps the dial to that particular setting, and updates the centre of the dial to show an image that illustrates the current selection. Rotating the dial creates a blend between any two consecutive algorithms, along with a blend between the those algorithms’ illustrative images.

Being able to tune the reverb sound using the dial is a brilliant idea, and opens up a lot of possibilities for honing reverb sounds. The more imaginative readers among you will no doubt already be thinking about sonic opportunities that might come with automating this dial. The sad news, then, is that this only leads to disappointing results. The changes between the algorithms are substantial and, while the morphing is smooth enough, real-time morphing just doesn’t create anything particularly useful or exciting. 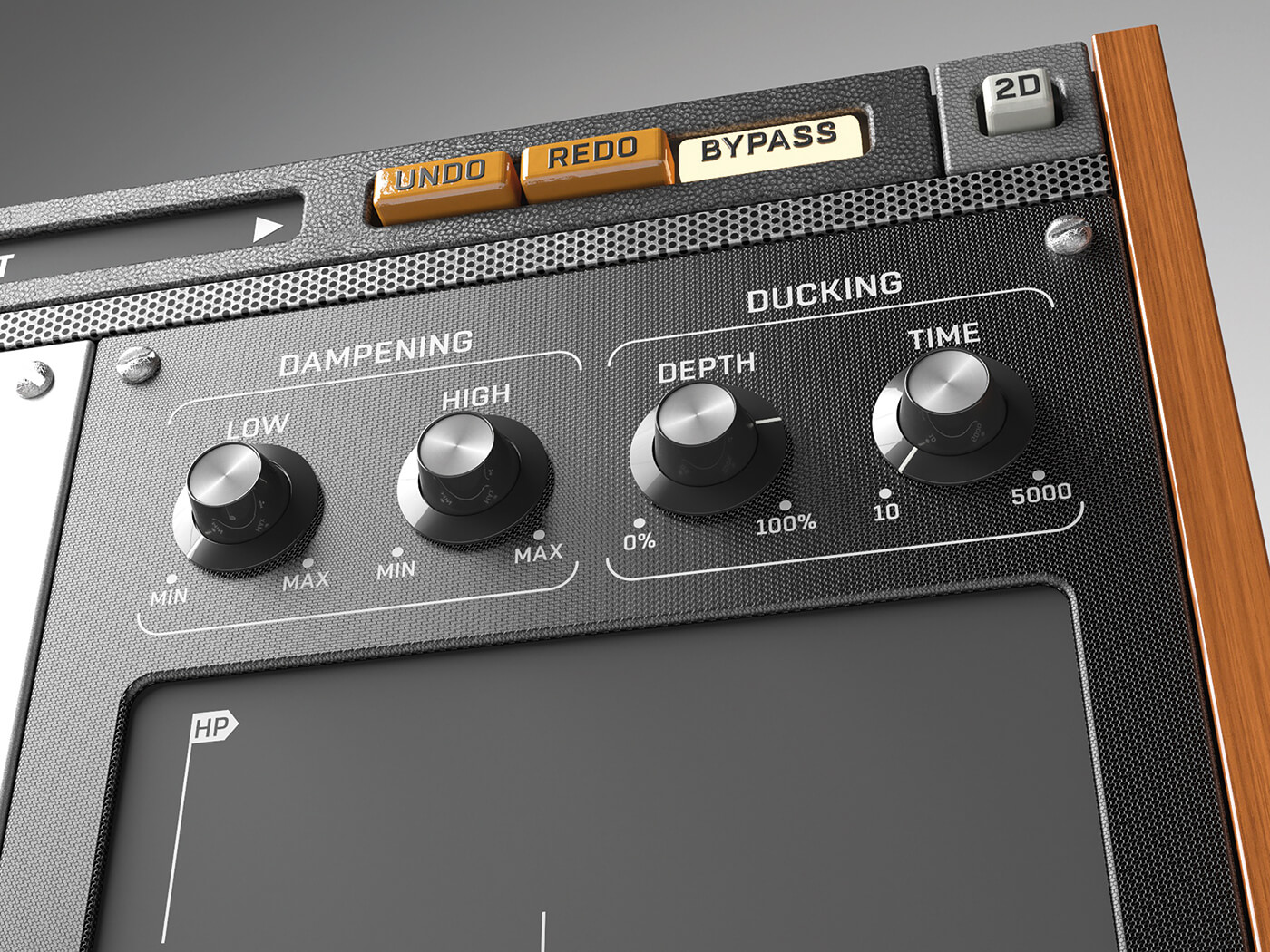 Below the reverb mode dial are three smaller rotaries that provide broad-brush control over the reverb effect. There’s a wet/dry balance knob that can be locked so that it retains its setting when loading different presets, a length dial that controls the overall reverb time, and a tone knob that sweeps the sound from a dark, booming, woolly reverb through to a bright, light and zingy one.

The right-hand side of MorphVerb’s GUI is occupied by controls that hone and condition the reverb effect, along with a spectrograph that shows a real-time analysis of the reverb sound. The controls for the plug-in’s low- and high-pass filters overlay this spectrograph in the form of draggable vertical lines that represent the filter cutoff frequencies. Adjusting these makes for results that are immediately apparent in the spectrograph. All in all, this is a supremely useful visual aid for helping to hone your reverb. You can further sculpt the tone of the reverb, adjusting how its different frequencies decay over time, using MorphVerb’s high and low damping controls, and its saturation phase.

The width and size controls are standard, and help you adjust the apparent size of the simulated acoustic space. These also work in conjunction with the modulation stage, which adds a hint of chorus to the processed sound, which can work particularly well with synth pads. There’s also the expected pre-delay, which allows you to introduce a gap between the source impulse and the onset of the resulting reverb.

What are less common within reverb processors – although often used in tandem with them – are MorphVerb’s ducking and compression stages. The ducker drops the reverb signal in response to peaks in the input signal, thereby eliminating the sudden reverb blooms that can result from a loud drum hit or vocal phrase, for example. The compressor also aids in smoothing out the reverb sound, and helps it remain prominent in the mix without you having to increase the reverb time and/or volume. 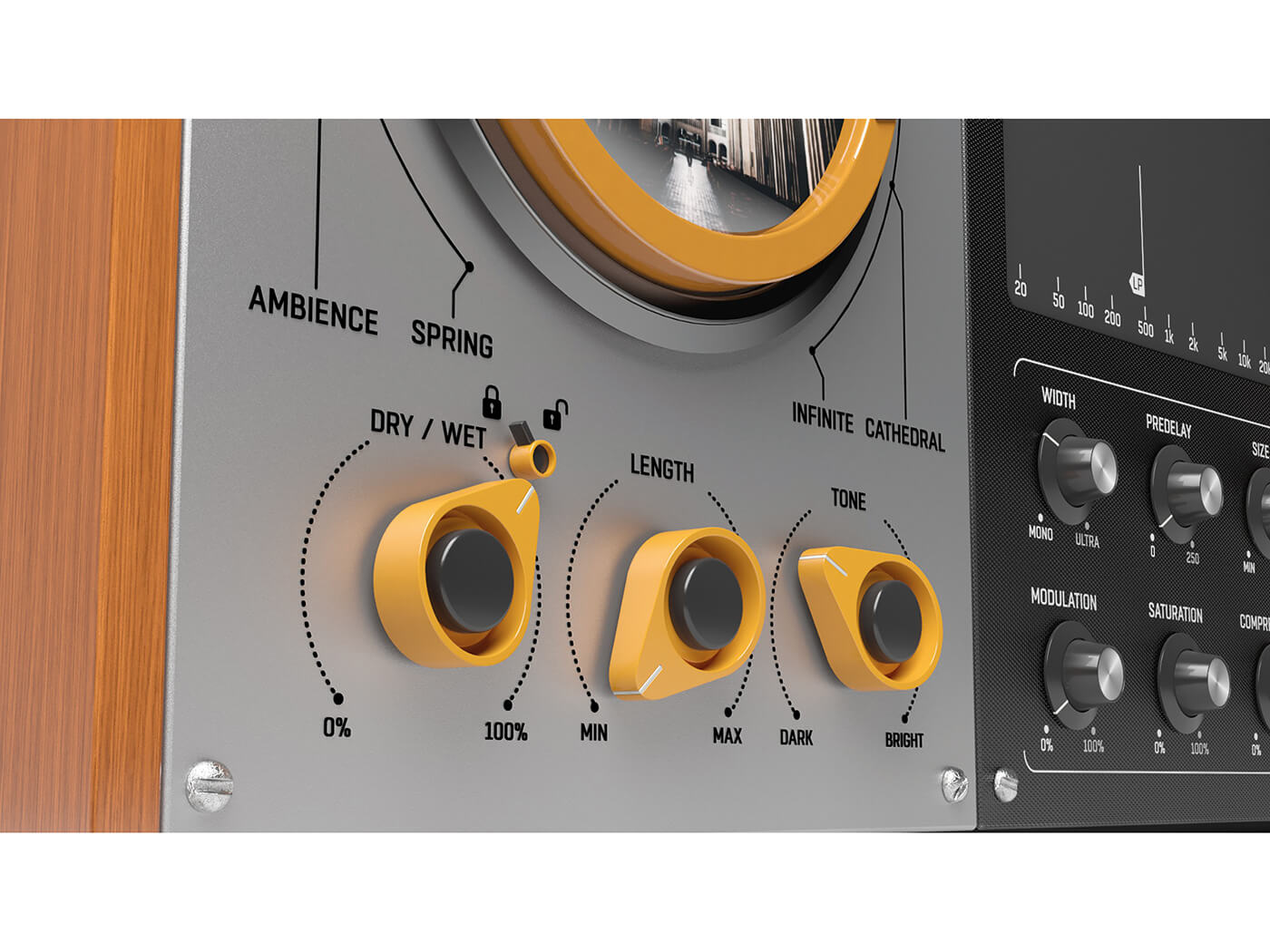 MorphVerb’s toolset certainly has it the potential to deliver a vast range of reverb sounds, and so it proves when using the plug-in. Reverb algorithms have a massive impact on the sound produced by any reverb processor, so the ability to blend between different algorithms is extremely useful. The built-in ducker and compressor are welcome features too, as it’s so much more convenient to have these integrated into the reverb plug-in than it is to set them up as separate processors and mess around with sidechain signal routing.

There are downsides to all this power, however. All these fantastic features add up to a fairly resource-hungry plug-in. Part of this is down to having to operate two algorithms and blend between them – indeed, when the mode dial is positioned so that only a single algorithm is selected, the system usage falls significantly. We suspect that a large portion of the resource usage will likely be caused by the real-time spectrograph, which isn’t always required. If there were an option to disable it, perhaps the plug-in’s footprint could be reduced.

We also noticed that, in some circumstances, MorphVerb can introduce the sort of nasal out-of-phase sound that you would normally associate with short unmodulated delays. This is dependent upon the selected settings and the nature of the signal being processed, and is something that other reverbs can and do suffer from too (although perhaps not to the extent of MorphVerb). It isn’t a deal-breaker but it detracts from what is otherwise a unique, flexible and smart reverb processor. 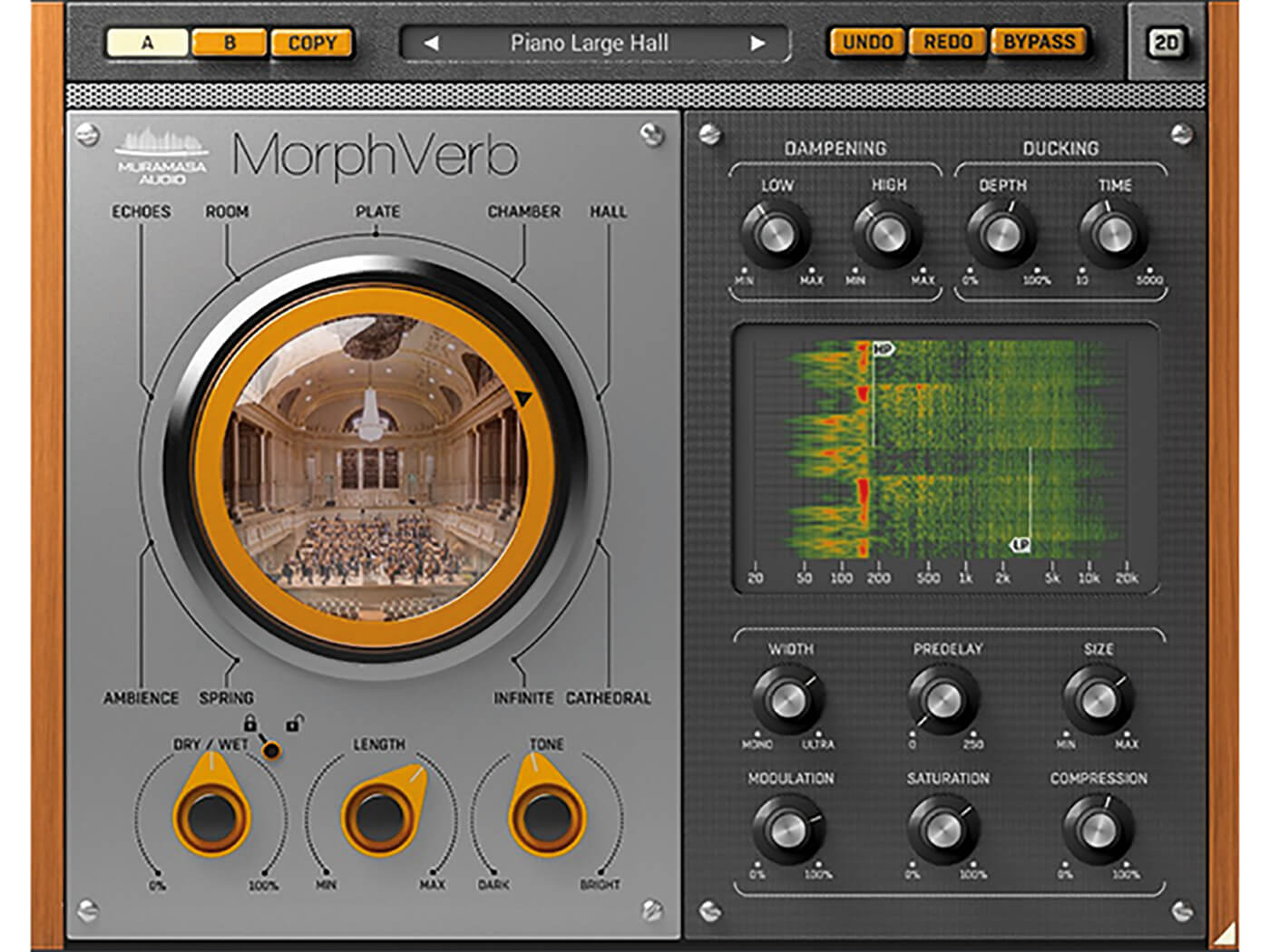 Your DAW will likely have its own reverb plug-ins, you’ve probably bought one or two nice examples too, and there’s even a chance you’ve picked up a few freebies over the years. With that in mind, does MorphVerb do enough to demand your attention – and your money? Its blendable reverb algorithms are probably unlike anything in your plug-in collection, and are supremely flexible.

The integrated spectrograph is more than a gimmick too, helping users understand the tonal makeup of the reverb they’re producing. Whether there’s enough here to tempt you away from your current favourite, we’re not sure. But there is a fully functional 15-day free trial that may help you decide. 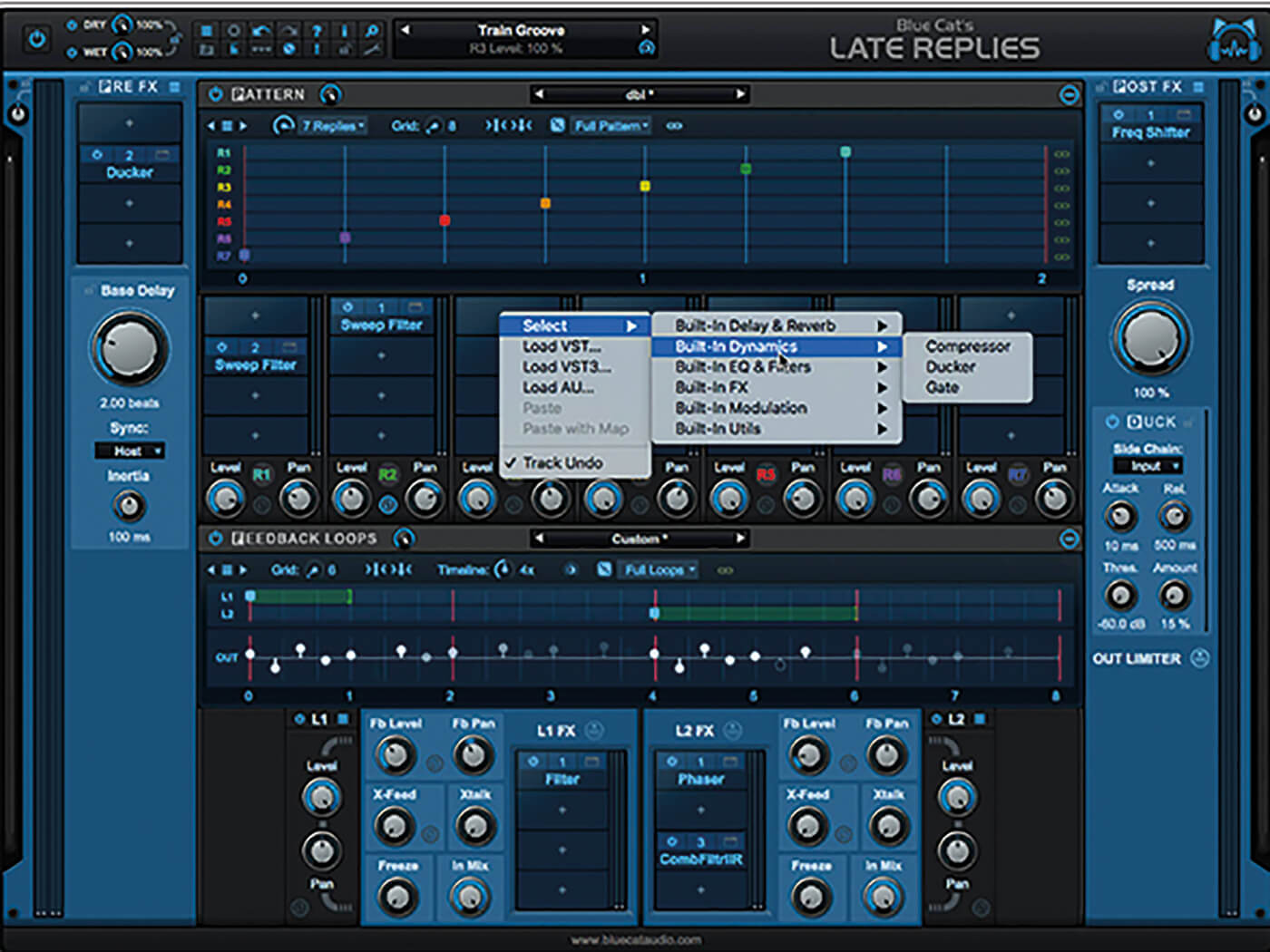 A true delay and reverb powerhouse, Late Replies’ core effect is a delay processor but one that can easily turn its hand to producing the wash of echoes required for reverb. The plug-in can host other plug-ins at almost every point in its signal chain too. 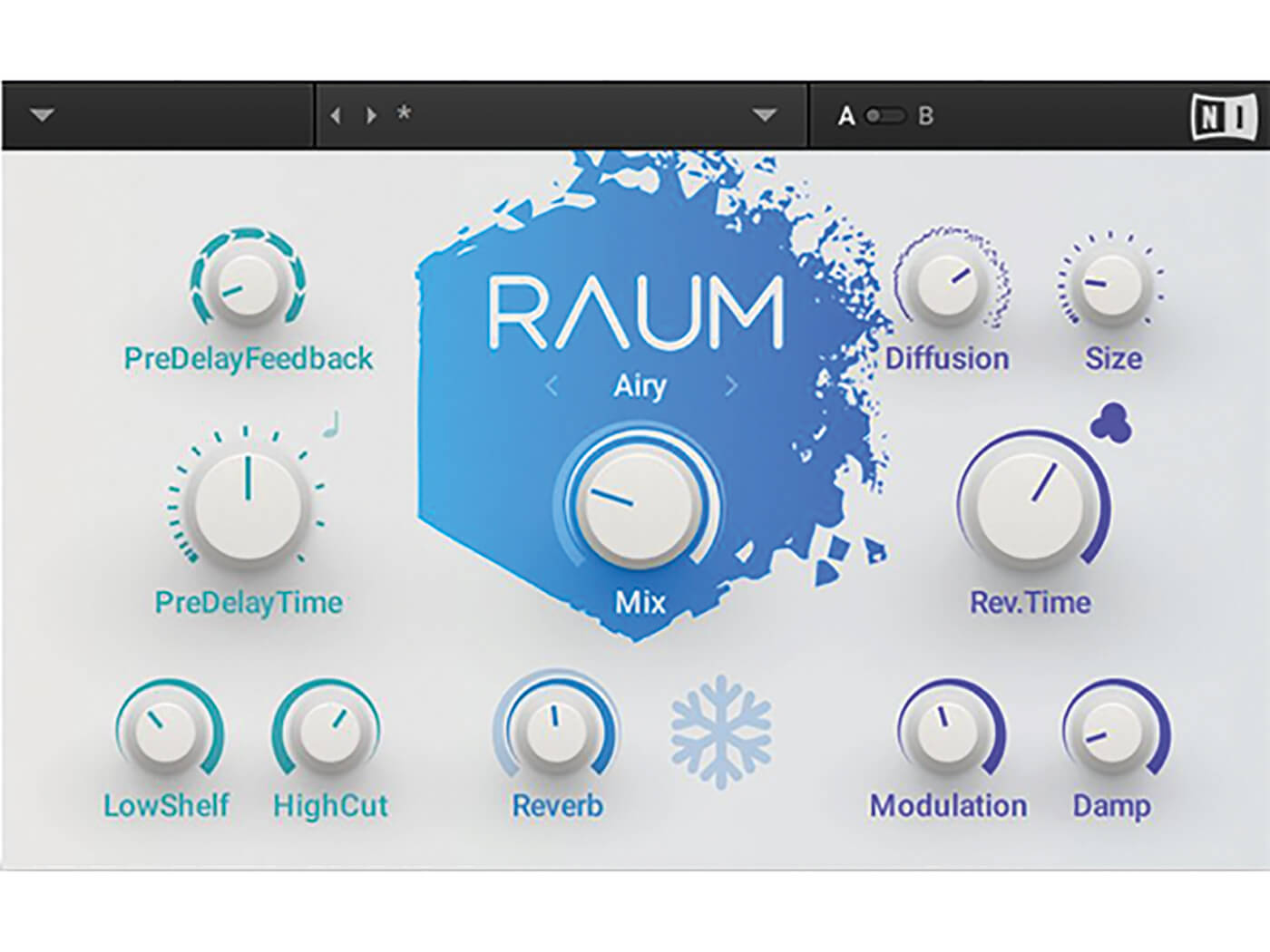 This interesting reverb processor keeps things simple while delivering a wide range of reverbs. Rather than splitting things up by room type, Raum gives you Grounded, Airy and Cosmic modes. You can’t morph between them but each mode delivers a range of reverb characteristics.