Building on the legacy of the studio legend’s world-renowned filter innovation comes an EQ plug-in that boasts high-fidelity sound and a variety of new features. 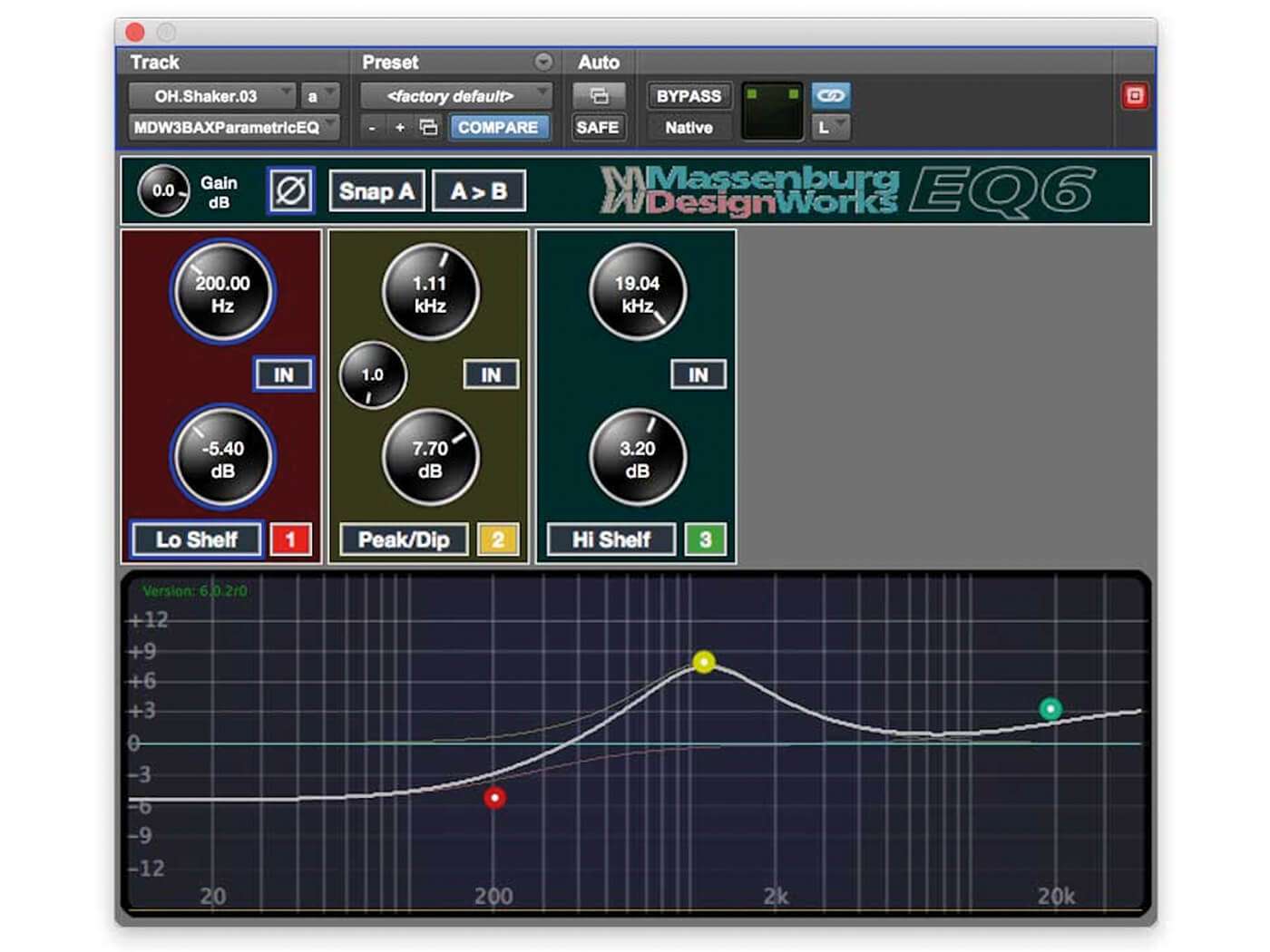 George Massenburg is a four-time Grammy-winning engineer, a peerless innovator and a product developer. He’s worked with the likes of Toto, Neil Diamond, Billy Joel and James Taylor. His architectural design nous has seen him pitch in on studios including Nashville’s Blackbird and California-based Skywalker Sound. And he has developed products such as the world’s first parametric equaliser, the seismic GML 8200, and the MDW software line. The MDWEQ6 serves as something of a culmination of his lifetime of research in the field, and valiantly demonstrates Massenburg’s paramount understanding of sonics, filters and peak energy.

Tip of the iceberg

MDWEQ6 is the successor to MDWEQ5, released in 2012. Like its predecessor, MDWEQ6 emulates the reciprocal filter curves of the GML 8200. It offers two standalone modes: 3- and 5-band, both of which operate in 64-bit AAX format (DSP and Native) and use constant upsampling for consistency in the high-frequency curves. The EQ flaunts a slew of new filter options, an updated user interface and a new active spectrum analyser.

Installing the plug-in ahead of the review, we make the rather eccentric commitment to use it as the only EQ in our mixes for an entire week, an excellent opportunity to measure the impact that such a tool can have over the outcome of a mix. In our first mix session with MDWEQ6, we apply it to the first plug-in slot of every track within the session and are pleased to see that our system usage remains locked at about 3 per cent (this EQ was clearly designed to be used often and everywhere). Upon opening the plug-in for the first time, we have to look past its dated GUI, which to our eyes is reminiscent of Windows 98, in order to dig into what actually matters: the sound.

No need to fear. The exceptionally clear quality of EQ6’s filters is immediately noticeable; whether boosting or cutting frequencies from a signal, the resulting tone is clear and open, the integrity of the transient feels natural, and the character of the original tone remains intact. The first song we mix with MDWEQ6 has a complex arrangement comprised of different keys and synths, all of which were desperately fighting to cut through the mix. On the Wurly, for instance, we use MDWEQ6 to quickly apply a subtle low-shelf dip at 150Hz, a bell to cut several dB of 250Hz, and then a wide bell boost at 1kHz to push the detail of the instrument forward. Within seconds, the Wurly settles nicely into the mix. 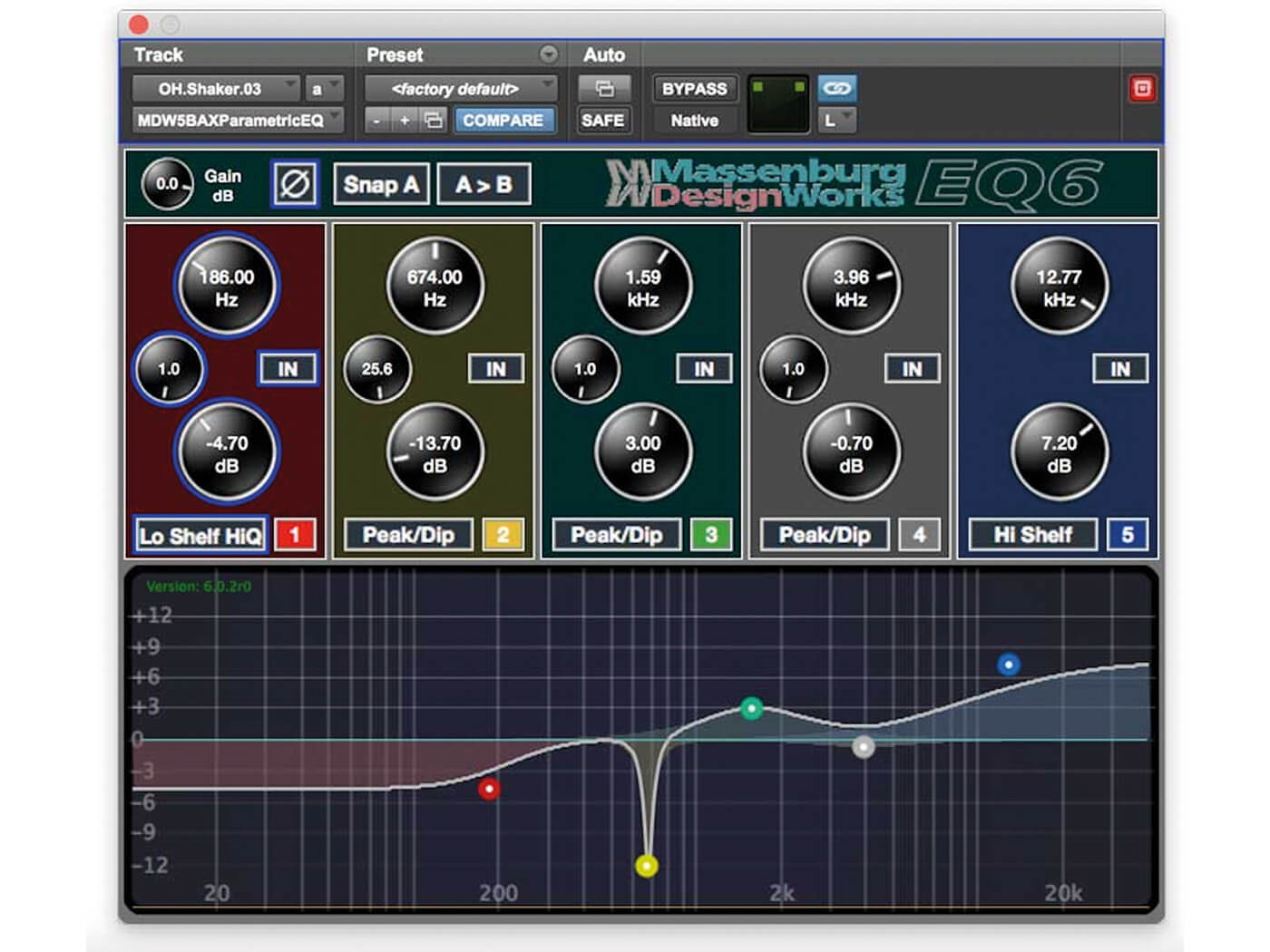 In the pro audio community, there’s a common notion that clean, transparent EQs like MDWEQ6 are best suited to cutting frequencies, and that colourful EQs (EQs that saturate and add harmonic distortion) are better for boosting and adding character to the signal. MDWEQ6 breaks those conventions. The filters sound deliciously musical, and make it incredibly satisfying to apply absurd amounts of any frequency to any signal.

After mixing a diverse range of tracks with MDWEQ6, each with differing levels of engineering quality, it’s apparent that this workhorse EQ can do a remarkable job in all applications. Whether you are feeding it gold or garbage, MDWEQ6 will always spit out a more refined signal. MDWEQ6 excels at notching out unwanted overtones and harsh resonances, and does so while imposing minimal phase issues, distortion and anomalies. Sculpting a harsh banjo track by cutting out a few sharp notches around 3kHz results in a polished sound that doesn’t negatively alter the banjo’s integrity (or sound overly processed and neutered) but makes it sound as if the microphone and engineering-level choices at the tracking stage had been suddenly improved somehow.

For some users, MDWEQ6’s lack of mid-side processing capabilities may be a drawback. However, we rarely use mid-side so this doesn’t turn us off – we feel that panning placement, arrangement, and a variety of other engineering tactics can accomplish any given task with more purity. Those same individuals may also be deterred by the set limitation of five maximum bands for equalisation.

But this limitation can challenge you to make better decisions when equalising; with other EQs, such as the FabFilter Pro-Q3, you can go off the rails quite quickly. MWDEQ6 has somewhat alleviated this limitation, though, by introducing High-Q shelving that allows you to adjust the attenuation surrounding the curve of your shelf. This behaves as an entirely separate bell curve right next to the shelf. We use this to sculpt low end, boosting the 80Hz shelf and adjusting the Q to make a small cut at about 125Hz to round out the low end (which still leaves four other EQ bands).

MDWEQ6’s IsoPeak feature proves a major proponent to the speed of our workflow. It quickly solos/isolates your selected band and boosts it way up so that you can get a magnified glimpse of the frequency you’re listening for, which makes it useful for quickly searching for problem areas or just getting a quick reminder of the role that each EQ band is playing. 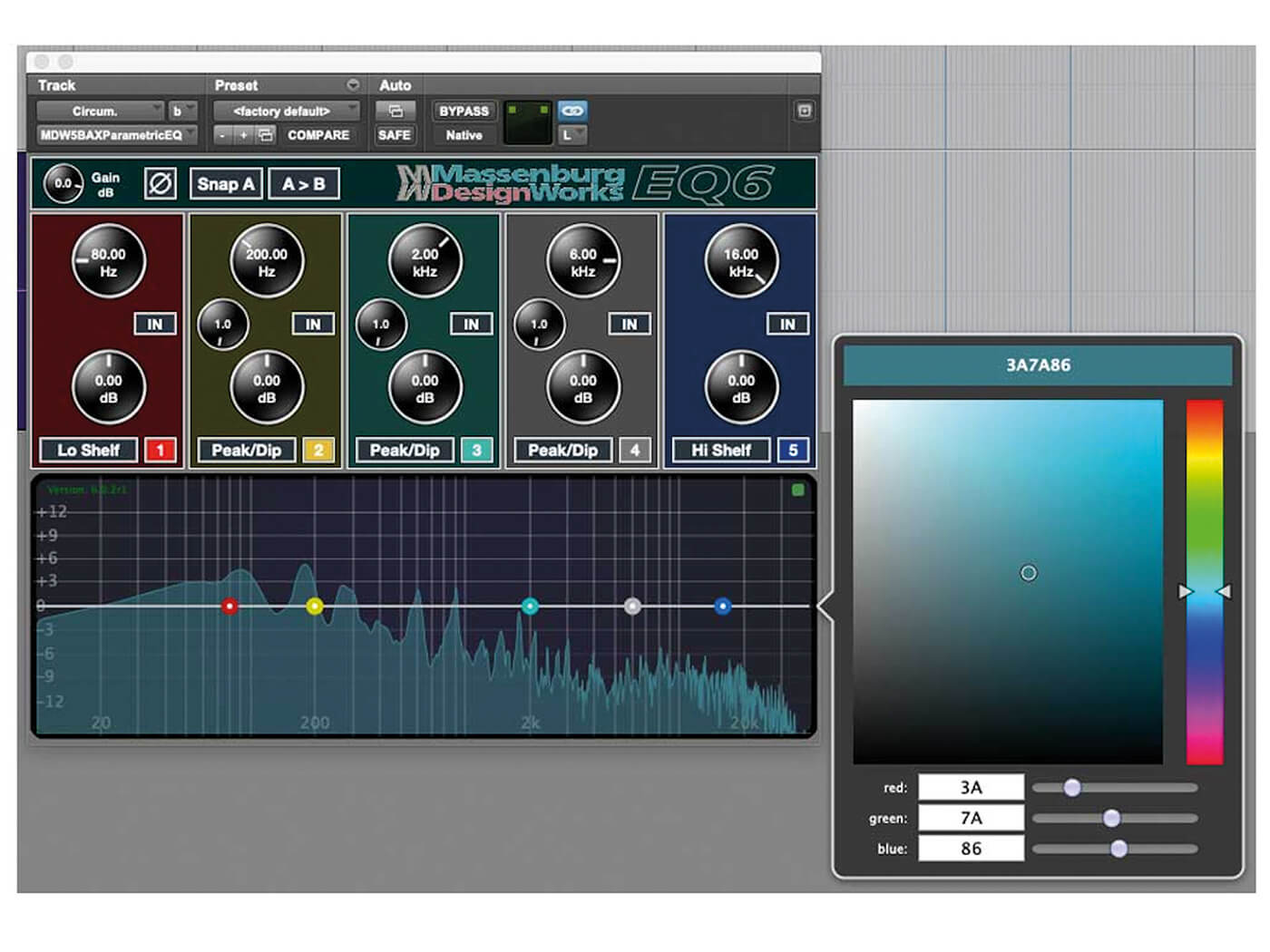 The grab-and-go nature of MDWEQ6 facilitates quick decision-making. George’s factory default frequency settings (80Hz shelf, 200Hz, 2kHz, 6kHz, 16kHz shelf) are brilliant choices for shaping instruments in a broad and musical way, and we even find ourselves sticking to these frequencies and using the gain parameters of each band to simply adjust more or less. When the material calls for particular settings, there are a few ways to enter setting changes within the plug-in.

You can reach for the parameter knobs to either scroll, click or drag, or manually enter the data, or reach for the graphic EQ and pull the bands around until you hear your desired sound. When clicking on EQ bands, MDWEQ6 implements useful control-, option-, command- and shift-click variations that should feel familiar to avid Avid EQ-3 fans. Another detail that we greatly appreciate is the tactile feel of its parameter knobs: the response speed when clicking and dragging is tastefully slow, which lends the knobs a sense of weight and allows for precise and natural tweaking.

One of MDWEQ6’s missed opportunities though is its lack of undo button. There are moments where you might go too far or accidentally relocate an EQ band, at which point your only real way to rectify your error is to return to an earlier save or session file backup. A workaround we’ve grown fond of, though, is to use MDWEQ6’s A/B functionality to quickly revert back to previous states. The A/B mode is also fantastic for quickly auditioning and comparing changes to the EQ.

One of the biggest additions to MDWEQ6 is its flexible analyser section, whose adjustable parameters modify speed, response and display colour. Whether or not you’re a proponent of analysers, you’ll appreciate the accuracy of its display, and it’s aesthetically satisfying to co-ordinate matching colours for certain instrument groups on both the tracks themselves and their coinciding instances of MDWEQ6. In fact, pleasing is a term that could be used to describe our entire time with this remarkable little plug-in. 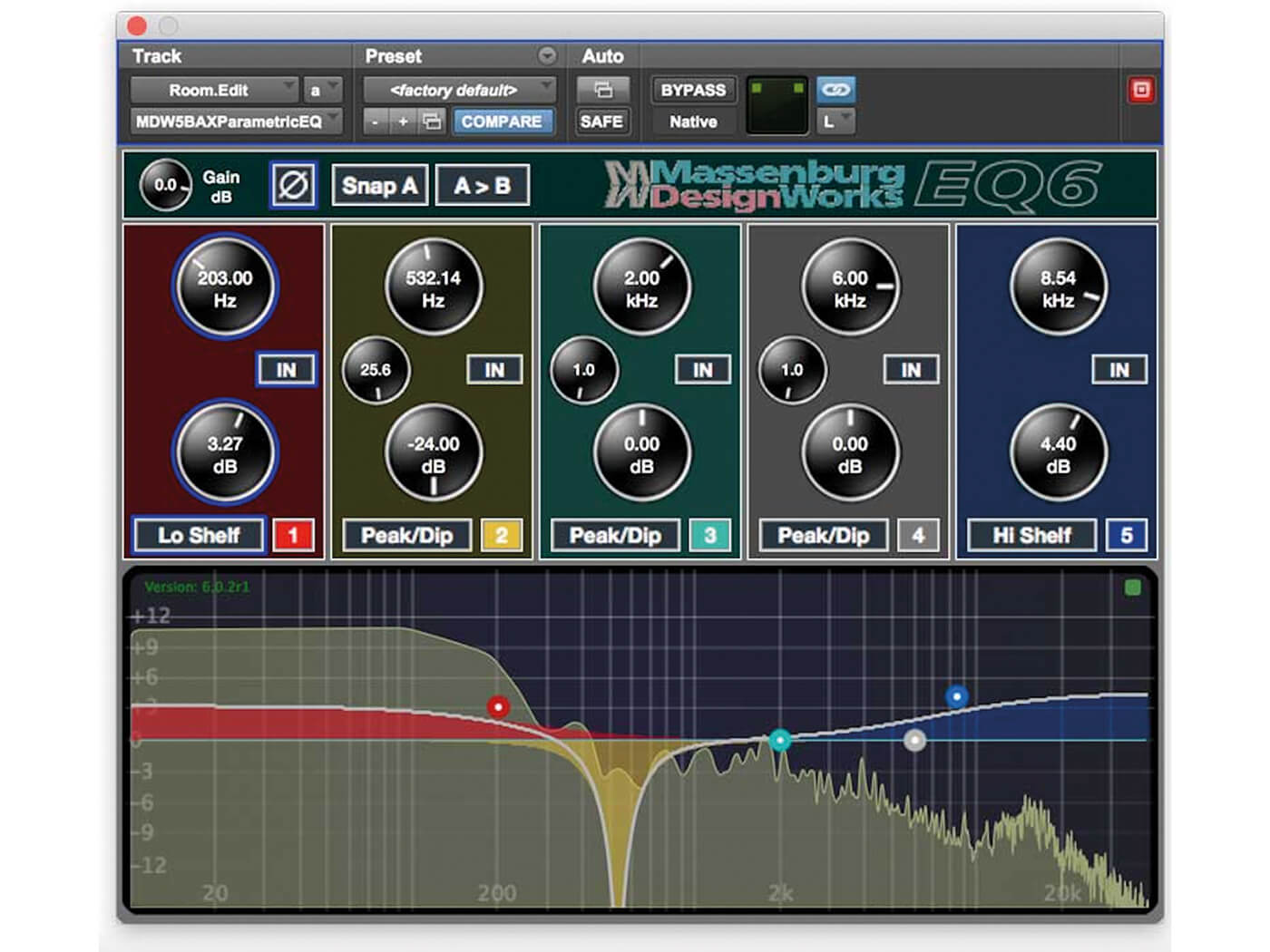 MDWEQ6 is a no-compromise EQ for purists, and the resulting sound is arguably among the highest class in digital audio. This may be a meat-and-potatoes plug-in equaliser but these particular meat and potatoes have been refined and prepared by the Gordon Ramsay of pro audio. You could certainly be seduced by other EQs its price range, many of which have prettier GUIs and more extensive capabilities, such as mid-side processing, unlimited bands and extra tonal color options.

However, MDWEQ6’s unmatched clarity, accurate phase coherence and transient strengths speak for itself. If your plug-in folder is full of coloured EQs such as SSL, Neve or Chandler emulations and you’re still relying on Avid’s stock EQ-3 for your general shaping and surgical EQ work, you will absolutely benefit from adding MDWEQ6 to your arsenal. 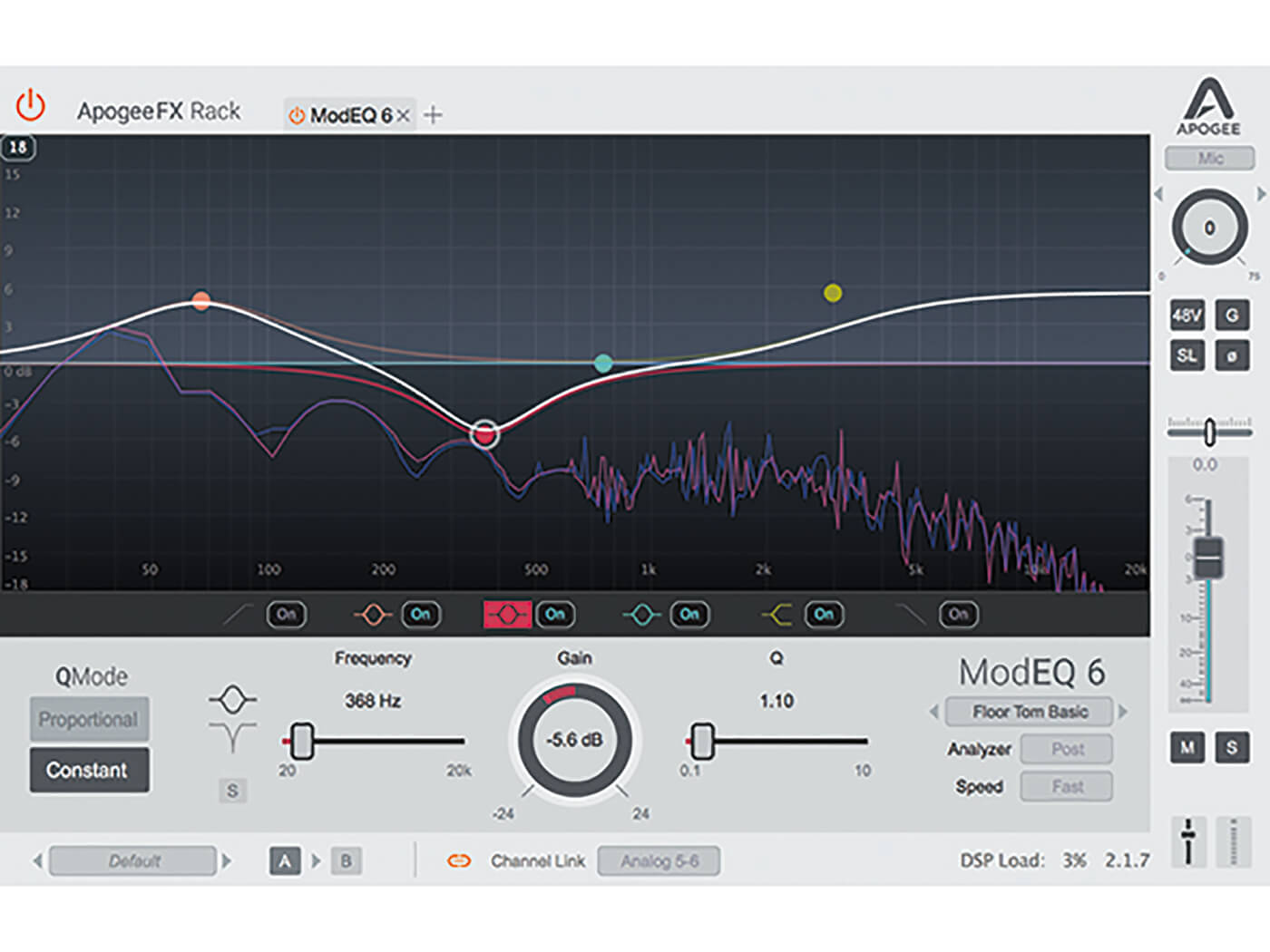 Apogee’s flagship parametric EQ plug-in is gaining popularity with many engineers, and sports a more modern UI, so it’s definitely worth comparing against the MDWEQ6. 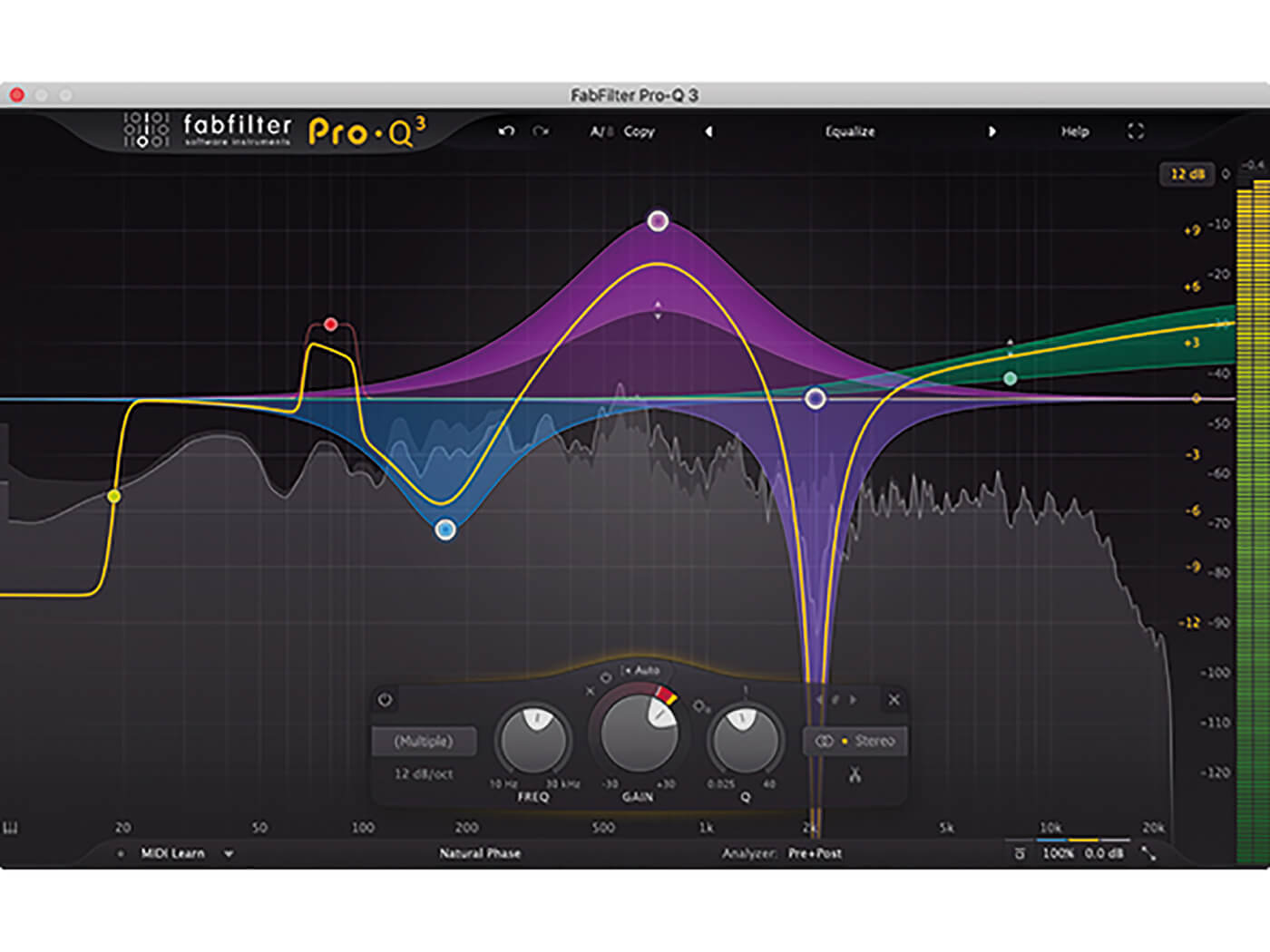 The Pro-Q3 is among the most popular EQ plug-ins on the market. If you’re working in many different studios and compatibility is a concern, this is a reliable option.