Can Mammoth Audio’s first major collection of sonic effects redefine your sound design toolkit or is it destined for extinction? 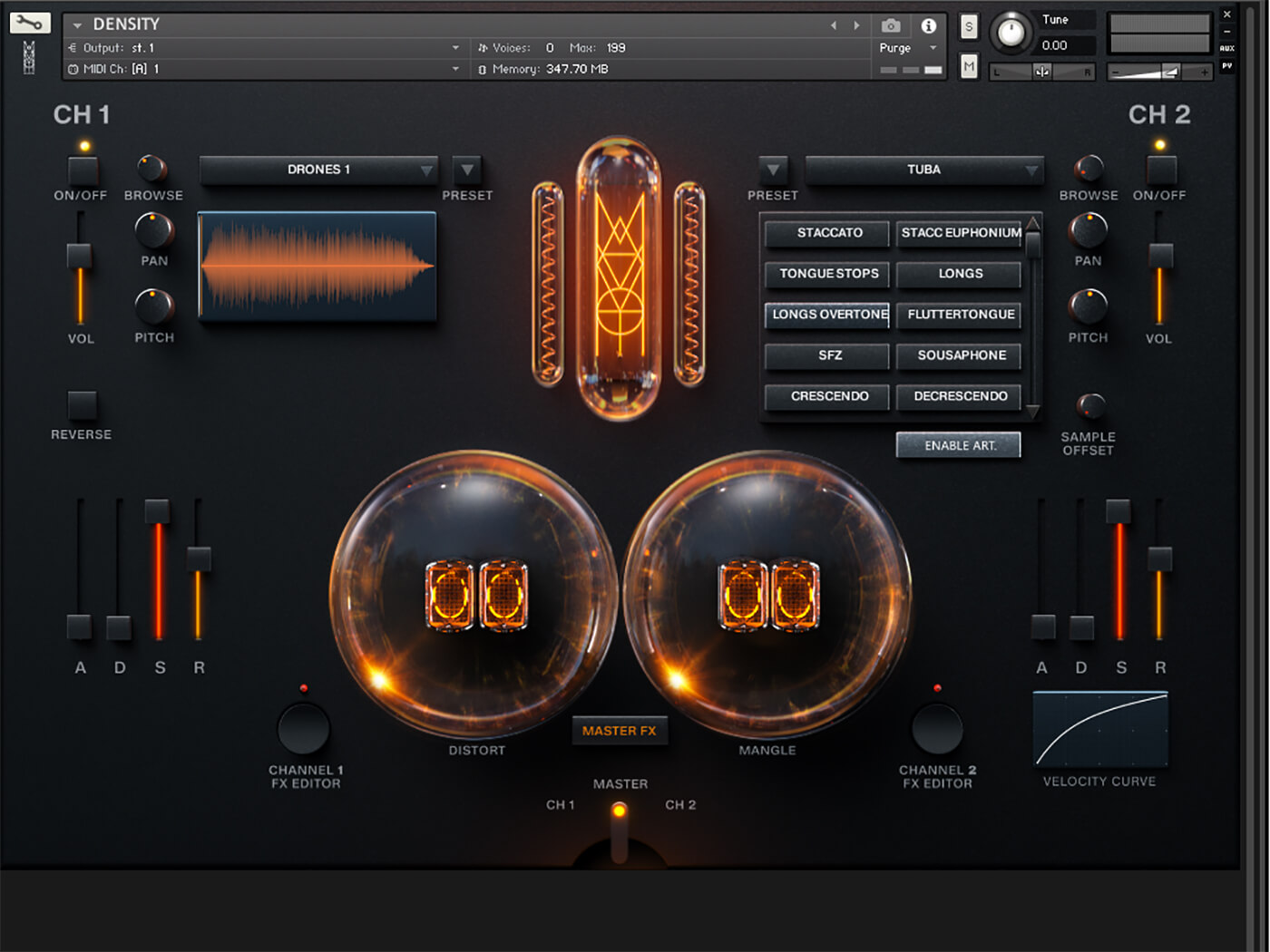 Having been started in 2019 by Elephant Music founder and music producer Vikram Gudi, Mammoth Audio might seem like something of a newbie to the virtual-instrument market. But that would be discounting the company’s pedigree. Formed by the team behind sister enterprise Elephant Music, the members of this East London outfit have been embedded in the music industry for almost a decade.

Created in 2011, Elephant’s sound design and music-for-picture work has led to an extensive portfolio, with credits that include Amazon Prime, Apple TV+ and Netflix originals, as well as AAA video games and Hollywood blockbuster films. Inspired by these successes, Mammoth is now heading into new territory. But cast aside any aspersions you might have about its prehistoric moniker – Mammoth’s first major release is bang-up-to-date.

Density is a Kontakt-based virtual instrument capable of producing cinematic content ideal for all manner of media work and wider musical production. The content is sample-derived and processed but the clever bods at Mammoth have taken all the hard work out of preparing impressive sounds.

Its sounds fall into two main categories: One Shots, in which samples are further categorised as Booms, Braams, Risers, Hits and more; and Playable, in which samples come as either loops or playable instruments, with all content open to additional processing through the use of onboard effects. There’s a dramatic amount of audio content on offer though, so expect some overlap.

The user interface is large and simplistic, with a clear definition between the left and right. You can load any element to either side, which makes it available via your musical keyboard while allowing for a degree of sonic mixing and matching. The samples are triggered independently and displayed on the keyboard graphic in Kontakt, so you don’t have to go fishing around to find your samples. 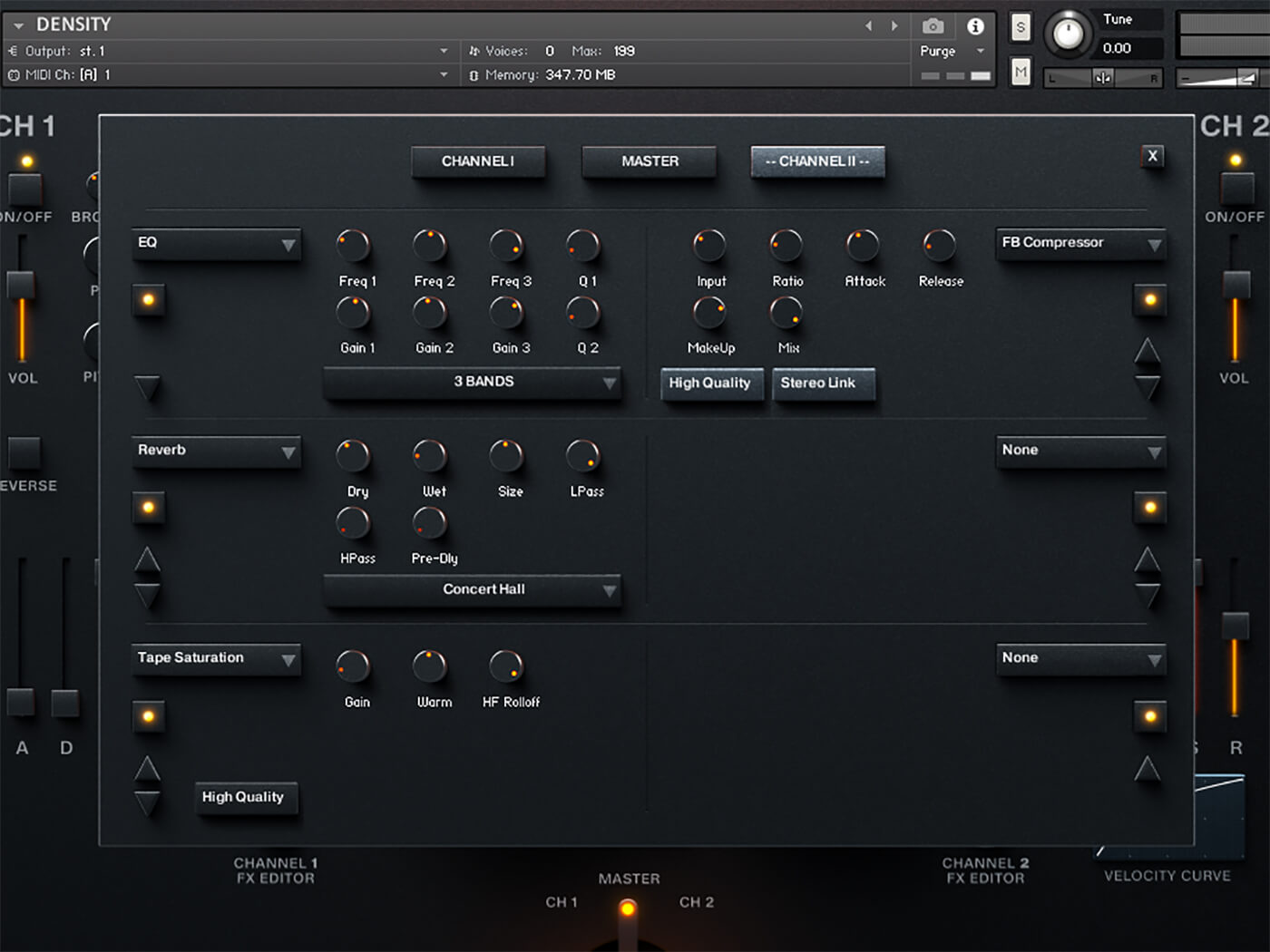 The single-shot content is organised logically. Clicking the drop-down menu on either side of Density reveals nine sub-menus of one-shot samples, with further categories reached through clicking. As each note becomes a single trigger for a sample, there is no pitch control of the one-shots from the keyboard, but it is possible to adjust the tuning of the samples in semi-tones by up to an octave. By default, these samples are based around the C pitch, although many of the booms and hits are pretty nondescript in terms of tonality.

The quality of these samples is undeniably good, although there is a bit of repetition in the sense that some of this content can sound quite similar. But Mammoth has commendably covered all bases by offering content that’s sometimes only slightly varied.

My only real misgiving is that I’d like to be able to control the pitch of the drones and braams from the keyboard, and there is no facility for this, as these are described as non-playable samples. Thanks to Native Instruments’ ingenious operation, however, it’s easy to assign a MIDI CC to the tuning pot on-screen, which allows you to switch pitches via DAW automation or a MIDI fader. It requires some manual dexterity but it’s possible nonetheless.

The hits and booms are tremendously impactful, while the risers and reverse effects do exactly what you’d imagine – and offer many different forms, from the subtlety of organic and acoustic timbres to the outright sci-fi. It’s very extensive and, rest assured, if things still don’t sound quite as you might like, Mammoth has you covered: Density has Distortion and Mangle controls capable of dirtying the acoustic samples nicely and pushing already frenzied examples over the edge. This is perfect for real-time control, should you find yourself wishing to hit specific bars or cues. 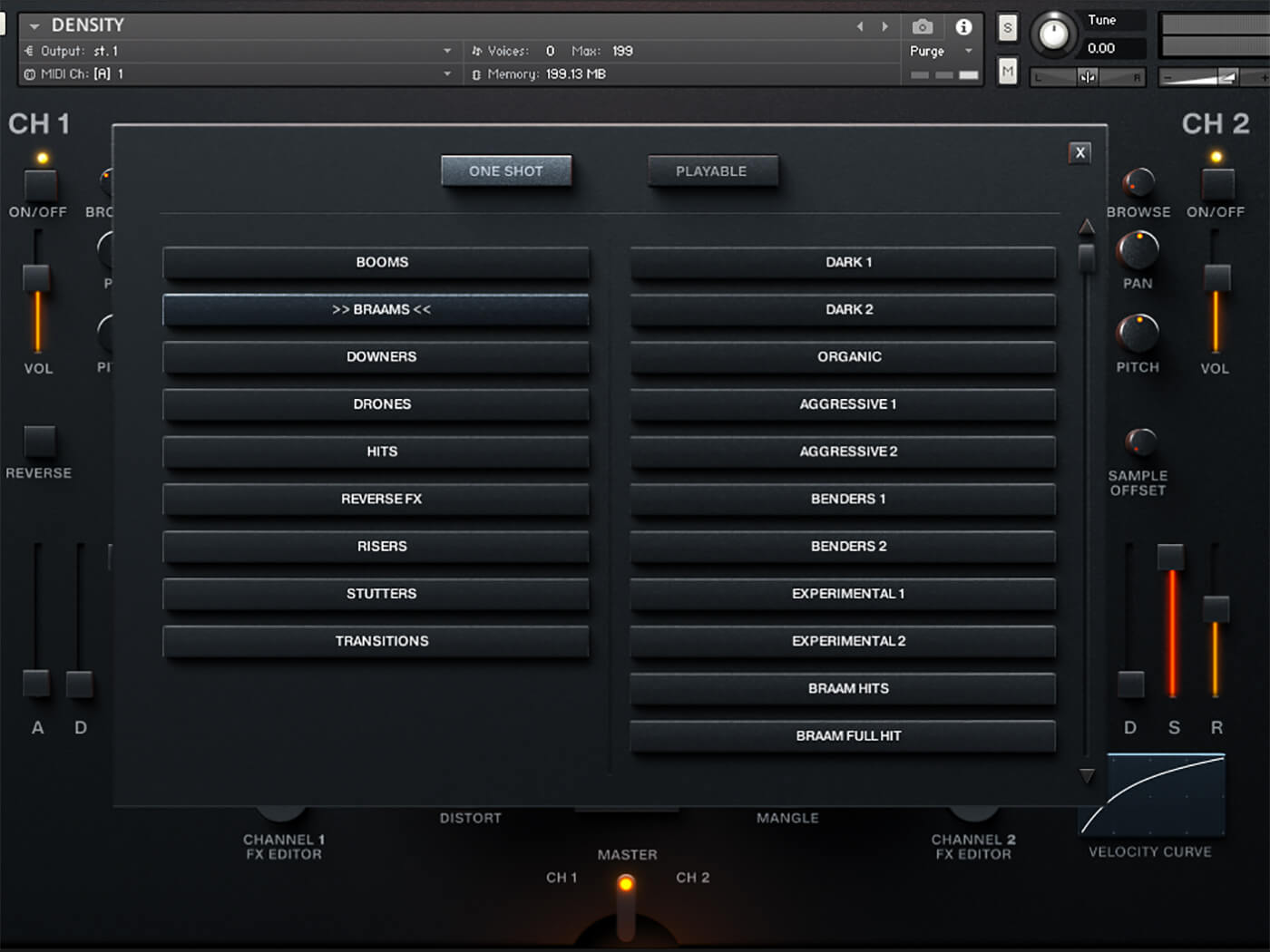 There are three playable instruments: Cello, Tuba and Throat Singing. These could be considered global categories too, as there’s much variance here. The cello’s sample capture comes courtesy of LCO member Jonny Byers, a player well versed in creating unconventional musical content.

There’s plenty of aggressive material too, all provided through a close and personal mic setting, with a number of different articulation categories. These may be changed manually or keyswitched from the bottom octave of the keyboard. While there are elements of more traditional articulations, such as staccato and pizzicato, the remit here is more aggressive and otherworldly, so there is an absence of more common long, sustained or legato samples by design.

Regardless, it all sounds impressive and would be well placed among cinematic material or as a launching point for the creation of further interesting tones, which can be achieved via the comprehensive onboard effects section.

Alongside the signature distortion and mangle effects that light up the main page, there are a further six effected elements at the global or channel level, which include filtering and EQ, amp simulation and yet more distortion. This makes the prospects of messing around with these instruments even more attractive – you can move away from the default cello tone with the addition of the Van 51 cabinet sound, for example.

The playable Tuba again extends to other areas, thanks to trombone and euphonium samples, all of which are similarly presented via a very close-mic’ed scenario. These instrument samples can be similarly amped up too, and given an aggressive edge with some heavy slapped tonguing.

The Throat Singer instrument is based on a vocal technique that sees singers using their throat to create harmonic resonances and overtones. The instrument is a bit like a vocalist with an in-built filter. Its sub-categories here fall in line with the overall Density concept, offering braams, hits, risers and drums.

The looped content is diverse, adapting and taking advantage of much of Density’s instrumentation. It all clocks nicely to the speed of your DAW. All users have to do is ensure that their initial trigger is timed appropriately. While there is further representation of the three playable instruments in the loop section, there is also additional content played on guitar.

It is your density

With Density, Vikram Gudi’s Mammoth Audio has brought together the best of what its team has been doing for years in other guises, all packed in a concise and fine-looking unit. This is an extensive collection of off-the-shelf samples that will appeal to anyone working in composition for media, while some of the more unusual instrument-based content could potentially form the centrepiece of a more unusual mix element for mainstream production.

Given the world in which Mammoth Audio resides through its sister writing team at Elephant Music, it’s hardly surprising that much of the content within Density lends itself to media-based work. There is plenty of content, but it could be quite easy to overuse some of the single-shot content, and that is where the effects elements will pay huge dividends, in applying smoke and mirrors.

Having said that, there is so much content and it’s users themselves who control how far they choose to take any repetition. The playable elements stray from the norm, so if you’re after traditional cello samples, Density might not be for you. Despite pushing the envelope in some areas, everything here has been beautifully recorded and treated. 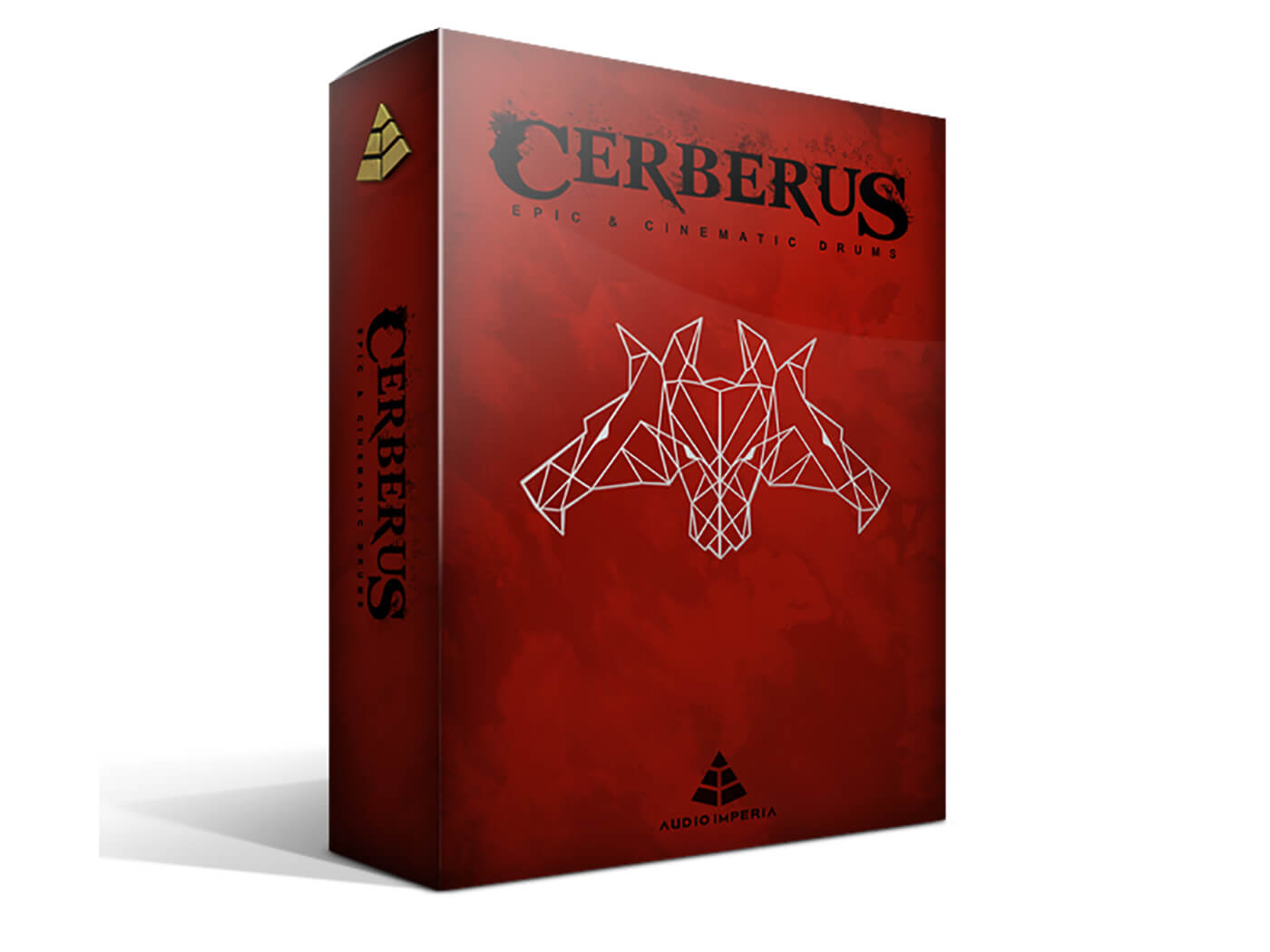 This comprehensive collection from Audio Imperia includes percussion loops and sound effects, all highly controllable, and hugely cinematic. There’s an array of mic options, should you wish to tweak the feel of the loops. 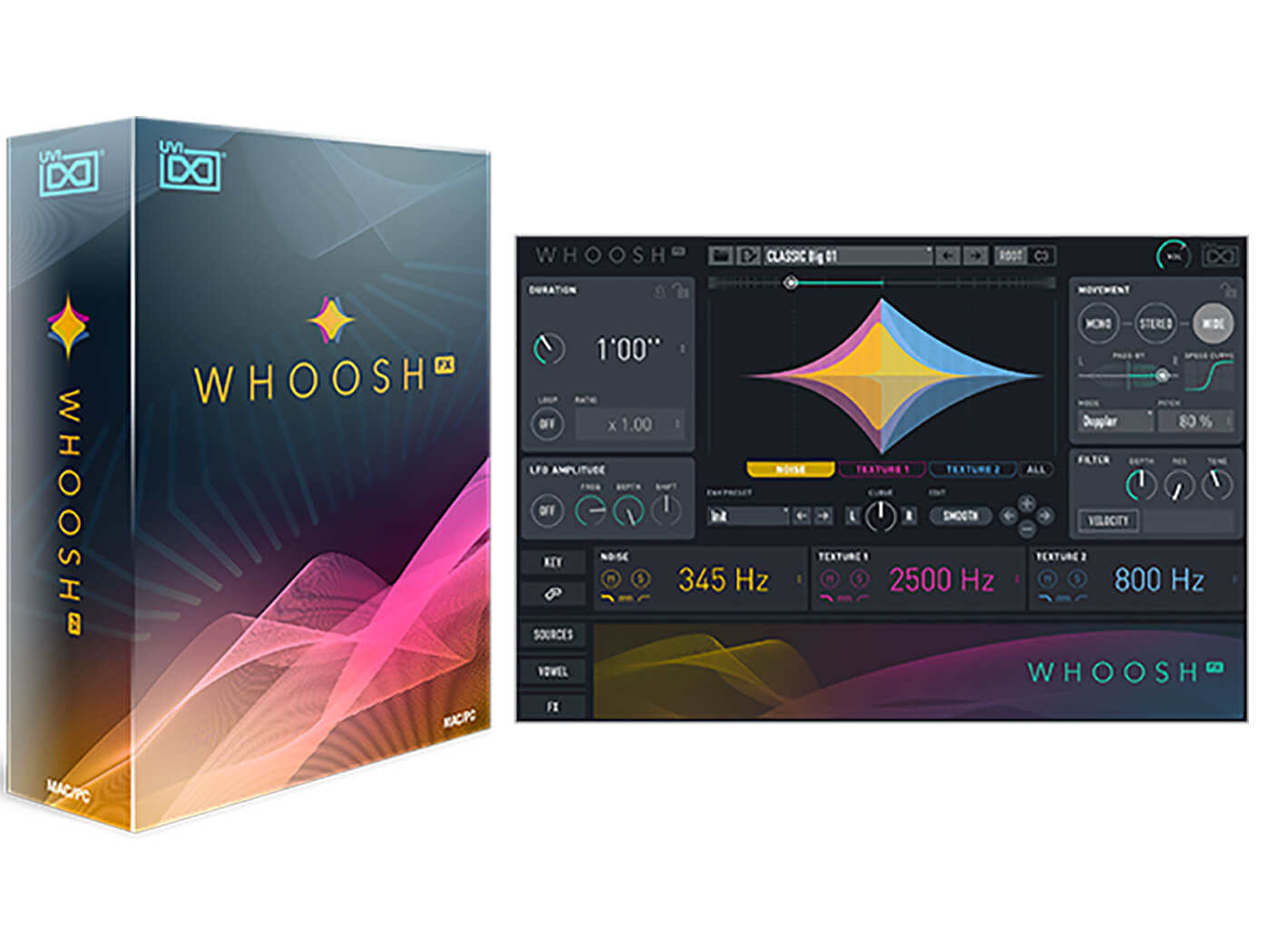 A comprehensive instrument for creating all manner of whooshes, crashes, bangs and risers, ideal for cinematic exploitation or heightening those builds in commercial tracks.