A deep and powerful synth that goes beyond FM – does KORG’s answer to FM synthesis translate to a soft-synth? 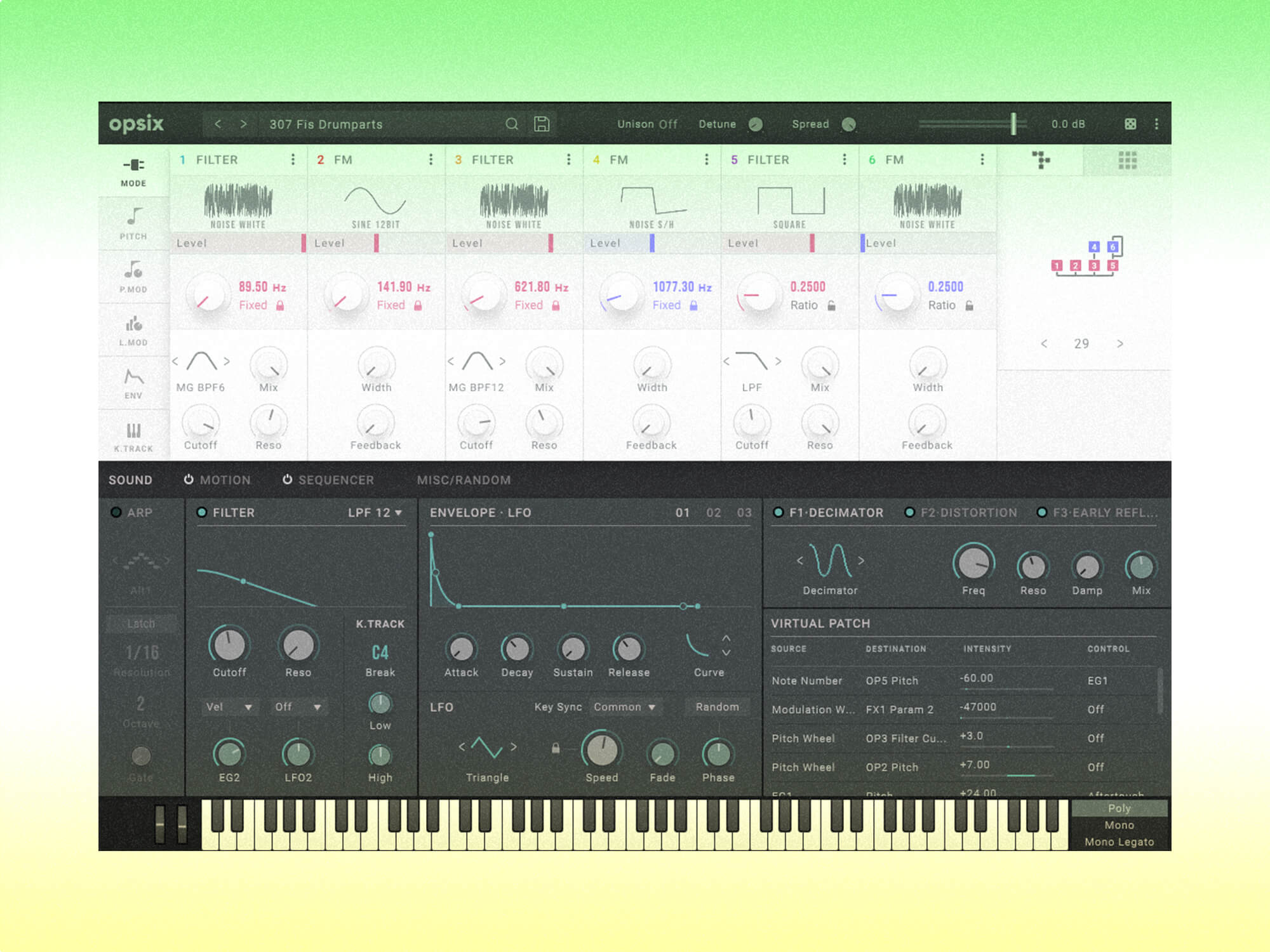 After a string of high-quality analogue releases including the Minilogue, Prologue and Volca series, Korg surprised everyone with the Opsix and Wavestate synths in 2020. These are two incredibly powerful hardware instruments, with deep editing and a modern sound. However, despite the onboard controls, crafting complex patches using a small screen and different pages isn’t the fastest or easiest way to do intricate sound design.

In another surprise release, Korg has now made available native software versions for each synth that sound exactly the same, but offer easier editing through their large, on screen GUIs. For this review, we’re going to look at the opsix software and see just how well Korg has managed to capture this beast in plug-in form.

The synth comes in VST3, AU and AAX formats, and can also run in standalone mode. It seems to be a trend now that companies provide a bespoke installer to manage all the licences, downloads and updates. And so you have to install the Korg Software Pass app before registering the product, but it’s a relatively painless process.

Korg describes the opsix as “Altered FM” as it goes beyond what traditional FM synthesis is capable of. It has six operators (hence the name) that can be set as Carrier or Modulator. It takes this further though, as you can set each to FM mode, or to Ring Mod, filter FM, wavefolder, or effect modes. This opens up a huge amount of sonic variety as each Operator twists and evolves the overall harmonics of the sound. In theory, it can do classic FM synthesis, plus subtractive, semi-modular, analogue modeling, waveshaping and additive. The original hardware was also praised at the time, for making the complex nature of programming FM a little easier to manage due to its six large sliders to control the Operator level, and colour coding (red for Carrier and blue for Modulator). This layout is duplicated for the software version, which makes the six Operators clearly visible at the top half of the screen.

You have a choice of 23 traditional and additive wave forms, then controls for Level and Ratio (pitch). Below this are several context dependent dials that change depending on the selected mode. You can also get additional controls here by switching between the Pitch, Pitch Mod, Level Mod, Envelope and Key Track tabs. To the right of the top section is the Algorithm selector, which gives 40 options for different combinations of Modulators and Carriers feeding into each other. You could, for example, program a patch and then try switching to a different layout, which would result in a different sound as the modulation routing is flipped on its head. There’s also an Algorithm editor that lets you select your own routing using a grid. Again, the colour coding is essential here to help keep track of what’s going on. On top of this, a nice touch shows small, real-time oscilloscopes for each Operator, plus a simple spectrum analyser of the overall sound. This helps give a better idea of how each edit you make is affecting each channel.

The bottom half of the screen is where you’ll find controls for the main filter, modulation sources, mod matrix, master effects, arpeggiator, note and motion sequencers and some additional settings. It’s a contrasting dark grey colour that really helps the eye when focussing on each section. Going into a little more detail, the filter has 12 modes, including a lovely resonant MS-20 LP and HP. There are three envelopes and three LFOs, with the first two hardwired to pitch and filter, and the third unconnected. The arp is relatively simple and does the job, but it only syncs the tempo to the DAW and not the playback, so it makes it a little tricky to perform in time, which is a shame.

The effects section however, is excellent, with three effect slots and a choice of 30 different, high-quality algorithms. These include a standard run of chorus, flanger, phaser, and distortion effects alongside some more interesting modules such as Grain Shifter, Shimmer Reverb and Guitar Amp. There’s also a superb 16-step sequencer, with six lanes of note, velocity, start time and gate that can be used to control each Operator separately. Plus, there’s a Motion sequencer that can be used to modulate up to six lanes of parameters. Finally, there’s an in-depth randomise function that lets you choose specifically which parts of the synth you want to roll the dice on, which can make for some controlled variations on your favourite sounds, or just out and out chaos.

You can modulate pretty much every parameter, including the effects and arpeggiator, which makes the opsix a very powerful and deep synth. However, the process of programming a mod matrix to set up each modulation makes things a little cumbersome, and there’s no visual feedback to show what or how parameters are being modulated. Furthermore, there’s no way to easily map parameters to a controller, outside of setting up some tedious CCs or going via your DAWs own mapping process.

We came across a bug that meant the controls for the AU version weren’t visible for recording into the DAW in real-time (tested in Logic Pro and Ableton Live). This means that for any automation moves, you have to scroll through a huge list to find the parameter that you want to control. Korg is aware of this bug though, and it should hopefully be fixed in a future update.

We haven’t covered every tiny feature of the opsix here as it’s such a deep instrument, but we should mention how it sounds. Unsurprisingly for an FM synth, it excels at bell, percussive and electric piano type sounds. Some of the organ patches in particular are very impressive and the programming throughout for the presets is excellent. Several of the sounds lean into the instruments natural ability to conjure up the 80s, but make no mistake, opsix is a powerhouse sound design tool that can also make incredibly rich, complex and modern sounds.

If you own and have used the hardware, then there’s no doubt that having its inner parts laid out on a screen will make for much easier and quicker editing. Thankfully Korg is offering a fairly reasonable cross-grade path of $49.99 for hardware owners, which is sweetened by the fact you’re able to freely transfer presets back and forth between the two.

For those looking to delve into the complexities of FM synthesis, this is a good place to start, as the fundamentals are presented in a fairly easy to understand manner. That said, the depth of this synth means it has a fairly steep learning curve if you want to truly explore all it has to offer. Our main gripe comes from the cumbersome way the modulation has been implemented and the issues with assigning controls and automation, especially given the price of the synth, but hopefully some of these things can be addressed in a future update.