iZotope is back with a new version of its AI-enhanced mixing suite. We prepare to meet our new assistant… 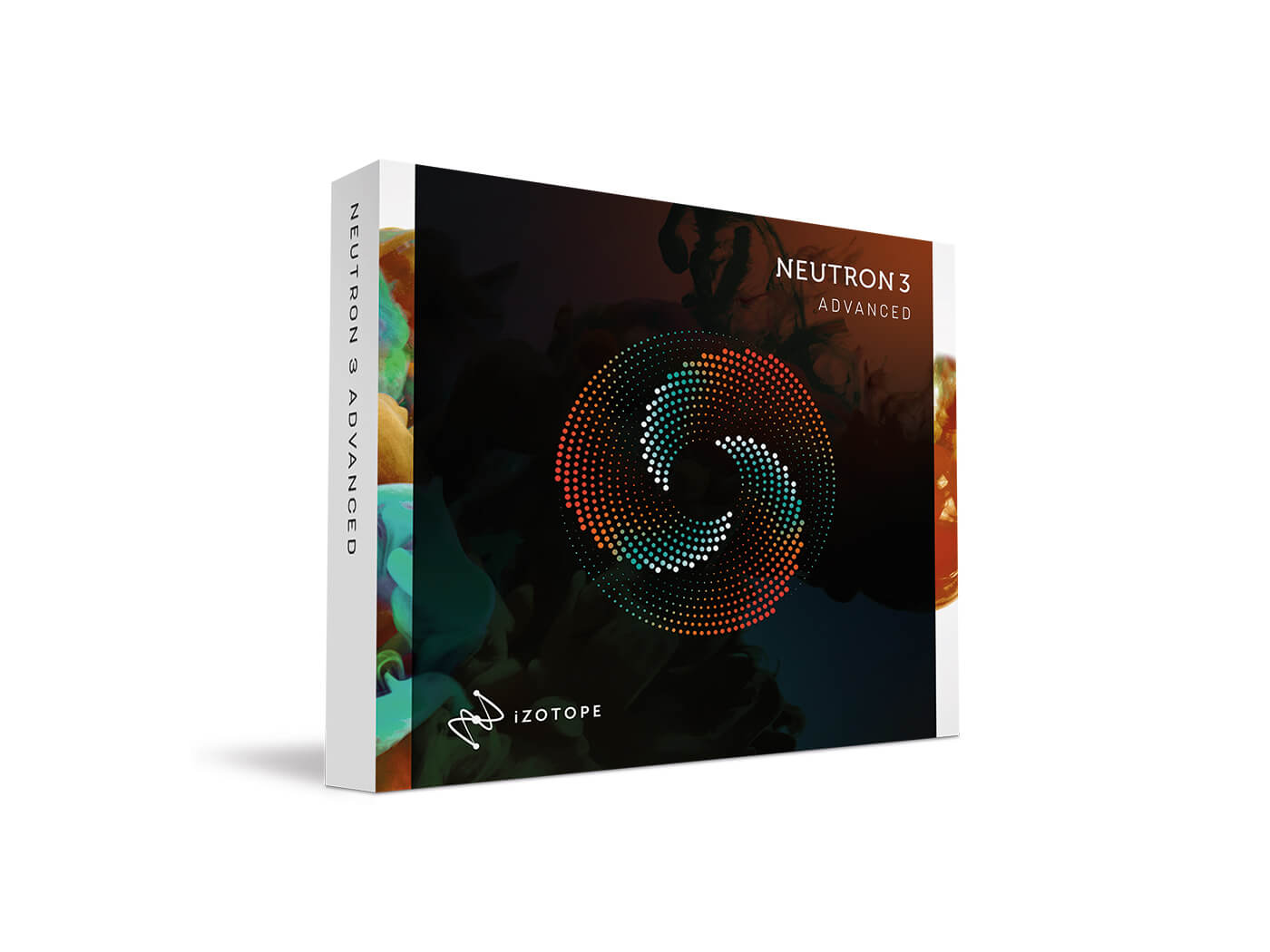 It doesn’t feel all that long ago that we reviewed Neutron 2 (alongside Ozone 8), which included a solid suite of mixing processors and useful tools alongside several new features and improvements to iZotope’s AI Mix Assistant. Now we are at version 3, with a similar-looking product on the surface, but look a little deeper and you’ll see that it contains a handful of notable additions and refinements, making this the best version of Neutron yet.

One of these is the unique new Mix Balance feature that can automatically set the volumes of your tracks to create an initial mix – and you can read about our experiences testing it below.

Tools for the job

We’ll be looking at the full-fat Neutron 3 Advanced, although it’s worth noting that there are cut-down versions, various upgrade prices and several software bundle options available, with more details on the iZotope website. So what’s in the Advanced version? Well, you get the seven main processors built in, which includes the Equalizer, 2 Compressors, Gate, Transient Shaper, Exciter, and new Sculptor modules plus individual plug-in versions for each. You also get the Visual Mixer, Relay and Tonal Balance Control plug-ins, plus the built-in Limiter, the improved Masking Meter, and the AI Mix Assistant that comprises of the previously available Track Enhance function and the fancy new Balance feature.

Aside from these main components, certain elements of the GUI have had a tasty upgrade, including silky smooth visual feedback that lets you adjust things like thresholds on top of large waveforms and spectrums. Putting these visuals front and centre and allowing you to resize the whole GUI helps show exactly what each processor is doing, which can ultimately lead to you making more confident and refined edits. 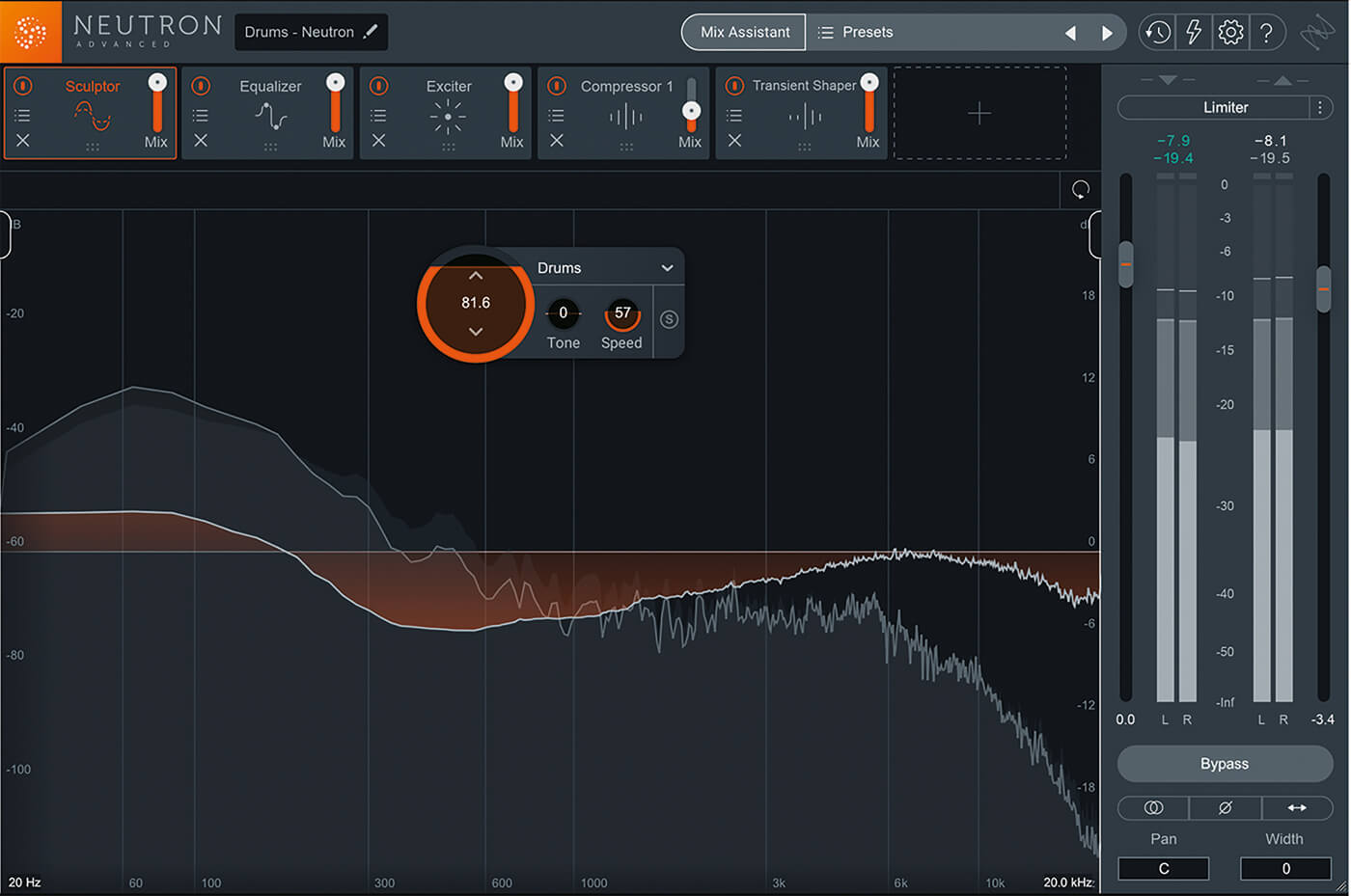 Under the hood, Neutron 3 is much more efficient, with improvements in metering, plug-in start-up time, memory usage and processing power, meaning you can work a little faster, and run more instances. They say that sessions using Neutron 3 should load up to 3x faster than those using version 2 and that is uses half the memory. iZotope should be commended for putting time into this and not just focusing on the new features. I’m hoping Ozone 8 also sees a similar refinement soon, as that plug-in still has the power to bring my computer to its knees!

Given that we’ve already reviewed large parts of this product twice already, let’s get stuck straight in with the new stuff. Clicking on the Mix Assistant button on any instance of Neutron 3 gives you the option of the previous Track Enhance feature, plus a new Balance feature. To use this, you first need to have instances of either the included Relay plug-in (which is a simple but well-featured channel utility), Neutron 3, or another iZotope product that features its Inter Plug-in Communication (IPC) technology placed on each track. All of your tracks will then appear in a list and you can select which ones to include in the analysis, with the option to give one or more tracks (such as the lead vocals) a Focus star.

You then have to play the track from start to finish while Neutron listens and works out which of five categories it thinks each track falls into; Voice, Bass, Percussion, Musical, and Focus. Once it has finished, you’re presented with a (hopefully) well-balanced mix, with five sliders for each category that can be tweaked like grouped VCA sliders on a mixing desk. If some of the analysed tracks end up in the wrong group, you can edit the classification and reassign each track from a list. Once you’re happy, you click accept and you’re good to go. Unfortunately however, you can’t get back to these sliders without re-analysing the whole track, which is a bit of a pain. It feels like a missed opportunity not to have access to them via the Visual Mixer plug-in, although to be fair, you should only really need to do it once before continuing with the mix proper.

Initially, we’re quite sceptical, as the results on our first pass need some fader and classification tweaking. For some reason, it has also decided that a white-noise sweep requires a 9dB boost! Once these things have been rectified, though and we bypass the resulting mix in and out, it is actually quite surprising. 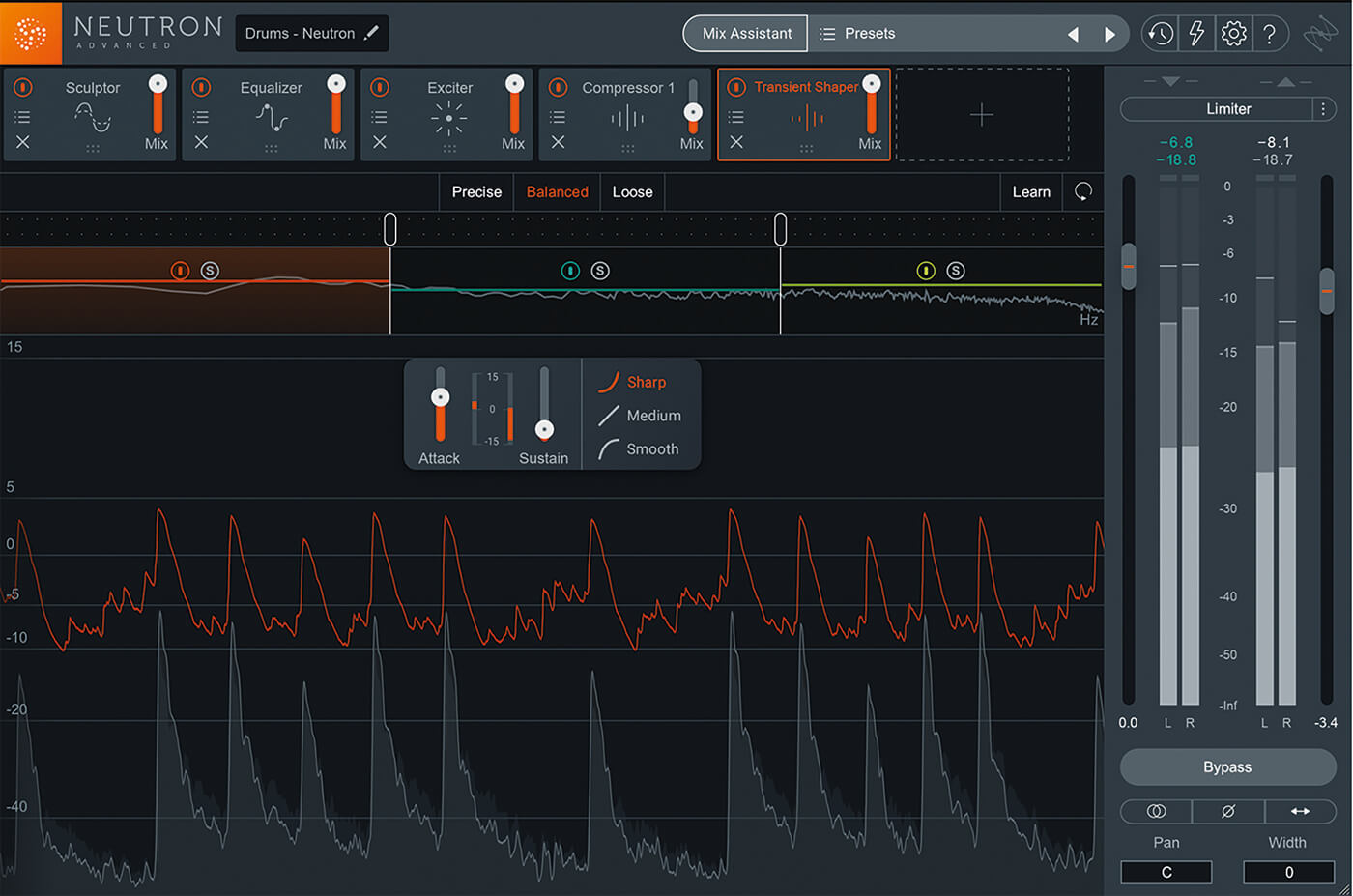 The excessively loud percussion has been pushed to the back and the lead vocal sample now sits more comfortably in the mix. In some respects, it transforms a rough mix into sounding more like a finished record. Alas, results on a second track aren’t so successful and we decide to ditch the suggestions entirely and start from scratch.

I need some assistance

The other half of the AI Mix Assistant, now called Track Enhance, can craft a bespoke preset for you from scratch. Plus, it now has an extended list of instruments as a starting point, due to the settings in the new Sculptor module (more on that shortly). As with the Balance feature, the usefulness of the results can be variable. Even on the low-intensity settings, it has a habit of bringing up the tails of percussive sounds and making them sound bigger and fatter which, although good sometimes, isn’t right for every occasion.

This also means the signal often ends up being louder or quieter, which isn’t very useful if you’ve just used the Balance feature to get a well-balanced mix. The main issue, though, is that there’s (currently) no way for Neutron to know the relationships between all the tracks in the mix, so if every track ends up being compressed and brightened, then you’ll just end up with an oversaturated mix.

Where the AI Assistant technology comes into its own is with Nectar and Ozone, as the technical goals for mixing a lead vocal and mastering are more clearly defined. All this said, it can be quite good at identifying problem frequencies to notch out. So as long as you’re willing treat each suggestion as a starting point to be tweaked, then it still has its uses. We later tried both Balance and Track Enhance on a rock track, which was more successful than the previous more electronic/dance-oriented numbers, revealing that Neutron is perhaps a little better at working with more traditional instrument line-ups. You don’t really know for sure until you try it out, though.

The other main addition is the Sculptor module and it’s quite a significant one as it features in many of the presets and is a staple part of the Track Enhance feature. Sculptor is in some ways similar to plug-ins such as Soothe, Gullfoss and Smart:EQ2, in that it makes many fast EQ calculations a second and can be used to balance or enhance the spectral spread of your audio.

Essentially, you have a list of 25 target threshold curves ranging from different types of piano, drum instruments, guitars, orchestral instruments, bass, vocals and dialogue and the signal is compressed to fit into each mould. Your first port of call is to select a relevant curve from the list, although you don’t have stick to the rules if you get good results using a different curve. You then have an Amount control, plus Tone that works a bit like a tilt EQ, Speed to control the ballistics of the compression, and a Solo function. 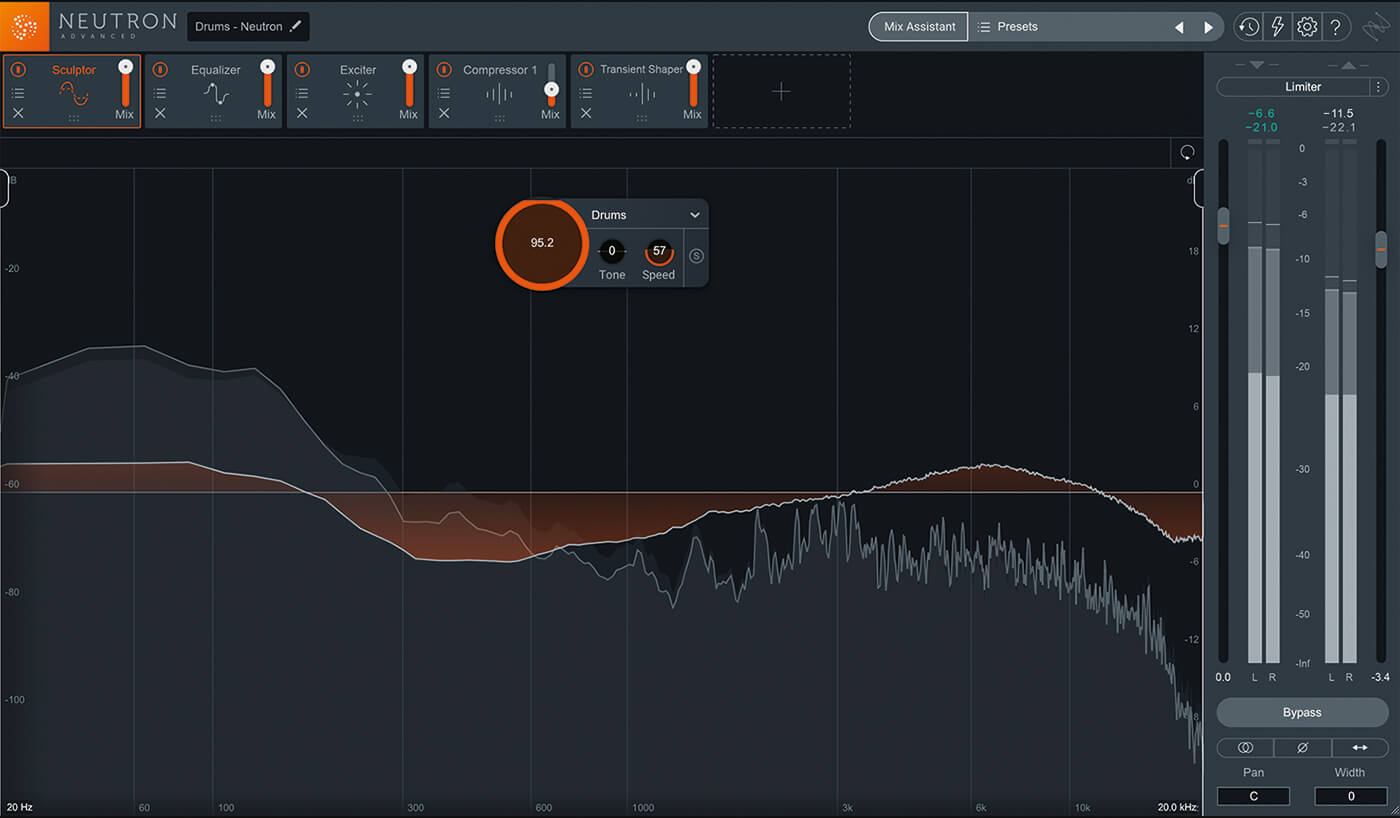 There are also Range Selectors for the highs and lows, which are helpful for when you want to reduce a specific region of harshness without affecting the rest. It’s arguably not as in-depth as Smart:EQ2 or as good at reducing resonances as Soothe, but it’s an easy to use effect that’s great for taming harshness, reducing mud and for doing general timbral changes in a more transparent way than just using EQ. Thankfully, it’s also quite light on the CPU, so you can go to town using it on multiple tracks.

Best of the rest

Those are the main new bits, but what about the rest? Well, Neutron’s multi-band effects and their individual plug-in versions remain excellent, flexible tools and the EQ module now has an improved Masking Meter section that’s a little easier to read. Although this is welcome, we were silently hoping iZotope would also include the frequency-tracking function for the EQ nodes that was part of Nectar 3.

The enhanced, larger visuals also make using the Transient Shaper easier as you can see the gain reduction in more detail. One thing we’re a little disappointed by is the lack of improvement to the Visual Mixer plug-in, though, which lets you control the volume, pan and width of each track on a single screen. It has the potential to be a great way to mix a whole track, but we were baffled as to why solo and mute functions haven’t been added, as this would greatly improve the workflow. You also get the Tonal Balance plug-in to put on your master output, which is a great way to test how you mix stacks up against the frequency spread of a reference track.

There’s no denying that this is the best version of Neutron yet. The slick additions and improvements to the overall feel of using the processors make it easier and a more enjoyable experience. When the AI aspects work well, they are a joy to behold, but ultimately, you still need to put in the work if you want to tame a complex mix. The tools are there to give you a helping hand, but you need to train your ears to know when and where to make tweaks to each module.

If you’re coming at it new, then it’s great value, but you may want to test the demo to decide whether it warrants the cost if you’re upgrading. Truth be told, our best results came from adding modules one by one and crafting presets from scratch rather than using the assistants and for this, Neutron 3 is still superb.

If you’re looking to expand on the native plug-ins available in your DAW, then Neutron is definitely an all-in-one option worth considering. You get a great suite of flexible, high-quality tools that’s easy to use, and having them in one shell makes for a speedy workflow. 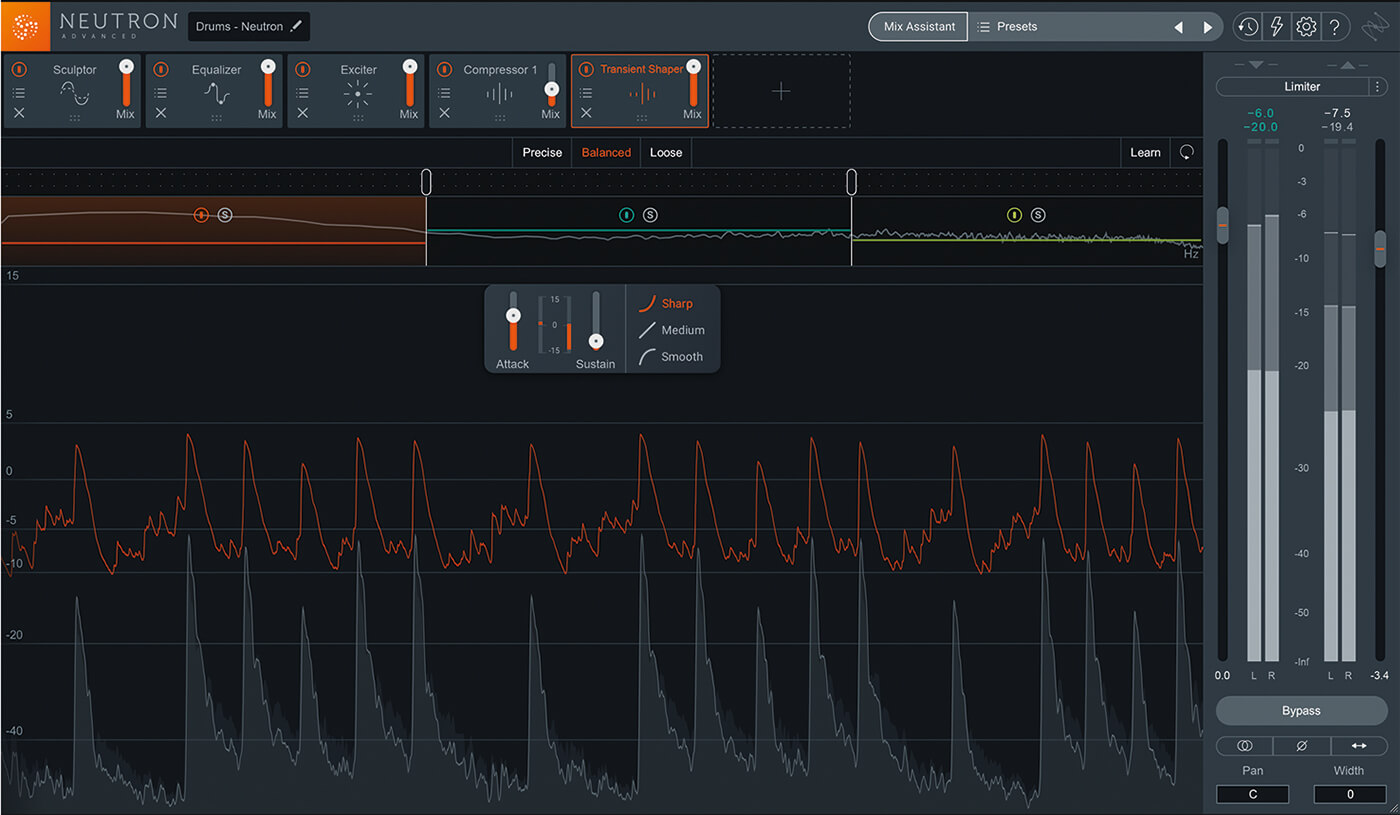 However, if you’re hoping that the AI assistant will magically mix all your music for you, then you may want to test out the demo first to see how it works with your material, as we found the results hit and miss. As long as you take each suggested setting with a pinch of salt and are willing to make tweaks using your ears as judgement, then you can get decent results. The raw processors are excellent though, so AI aside, it’s still a great package. 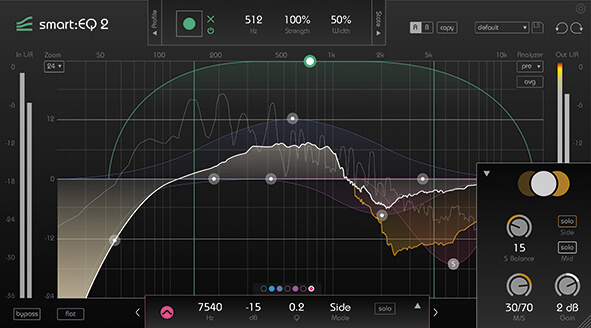 Sonible is another company leading the way with intelligent mixing tools. Smart:EQ2 will analyse your audio and generate a custom filter curve to create a natural tonal balance and the new Smart:Comp is a unique AI-based plug-in that suggests settings for time-based compression, while retaining balance via spectral compression. 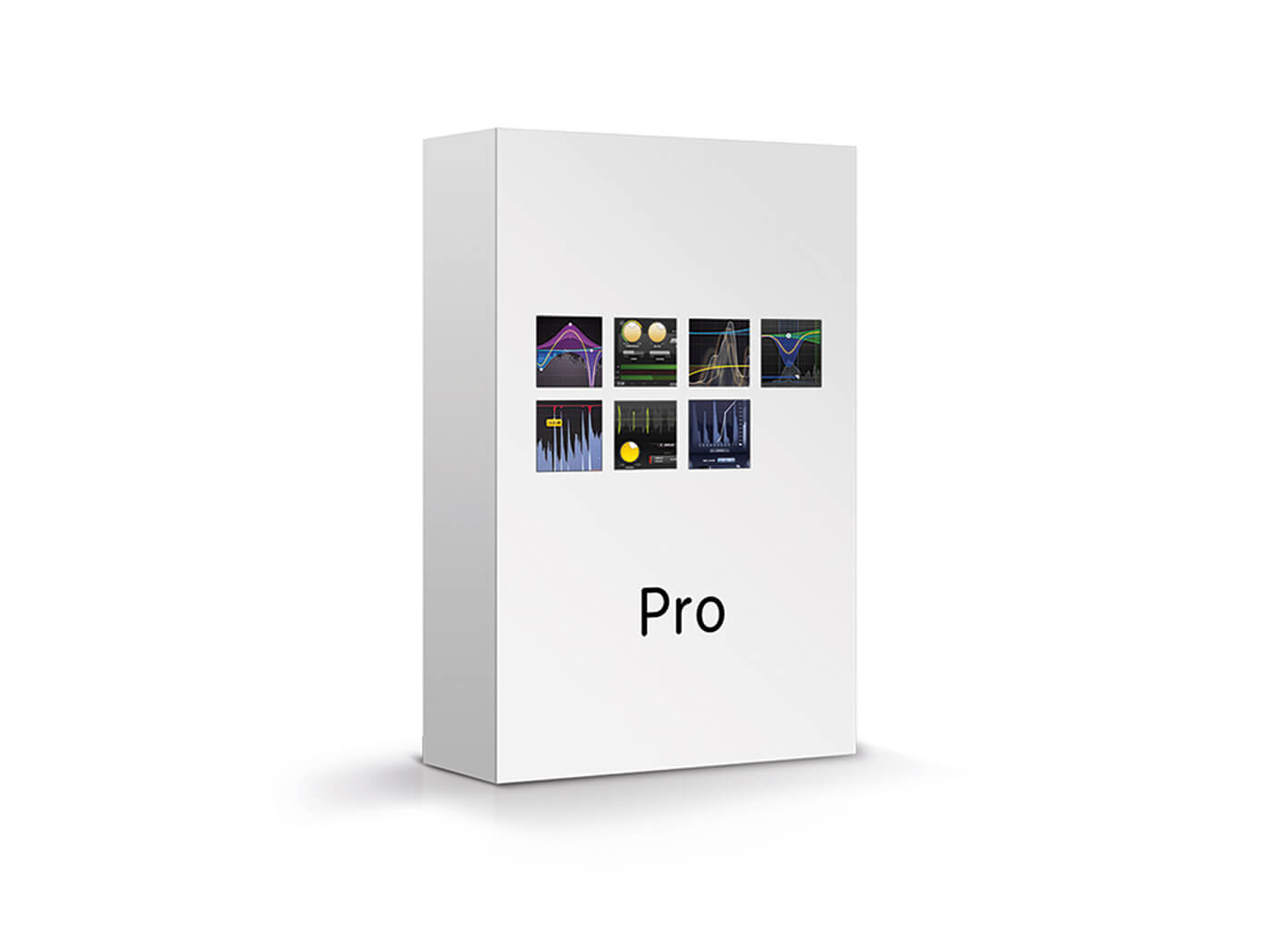 If you’re willing to spend a bit more, you can get seven of the best plug-ins in the business covering compression, gating, mastering-grade limiting, multi-band compression and expansion, dynamic EQ and high-end reverb. They may lack the AI aspect of Neutron, but the FabFilter suite is a deep and highly flexible set of tools.