AI-powered capture and modelling of your own amps, cabs and stomp boxes you can do at home? IK’s made it a reality. 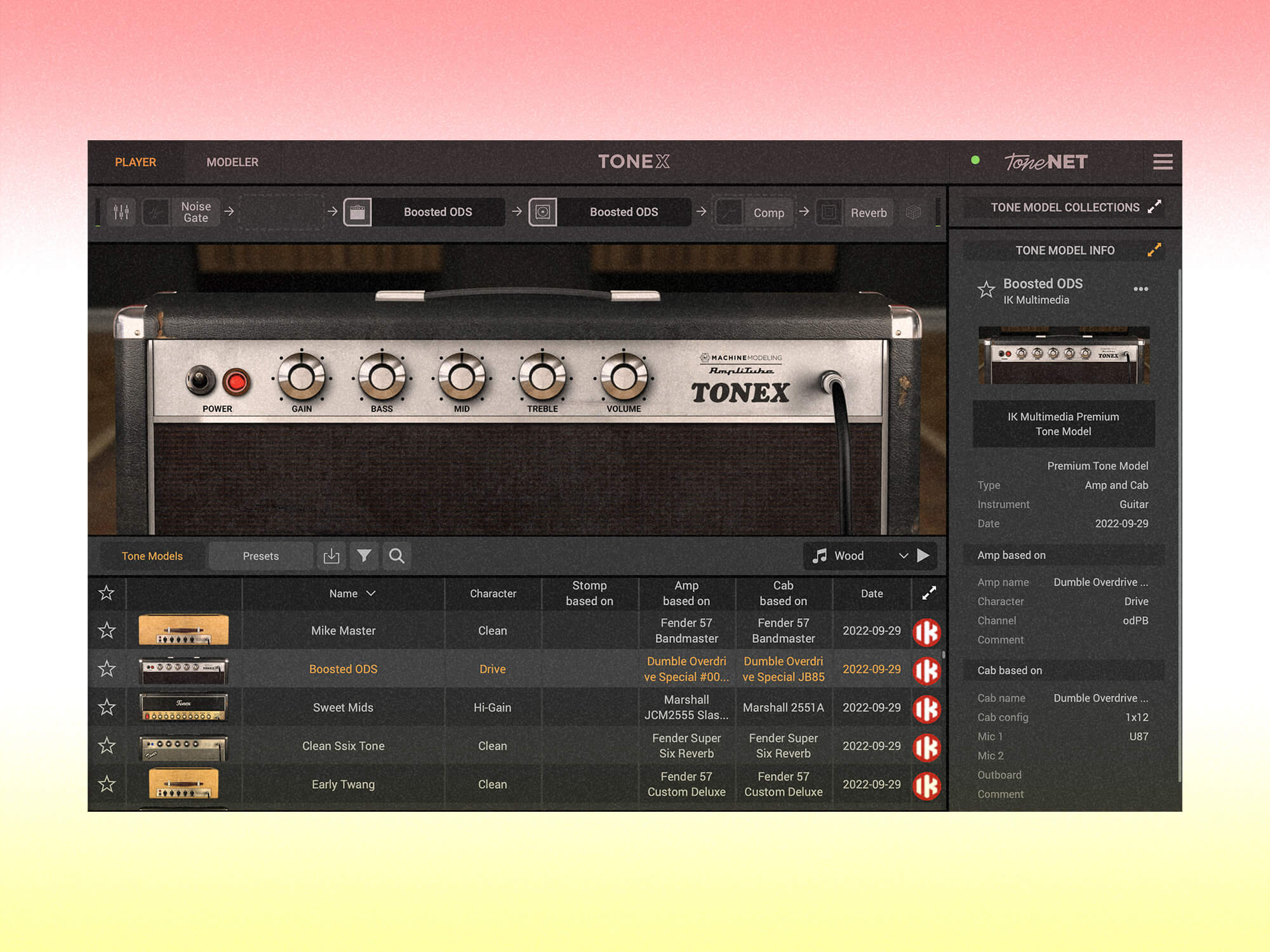 ⊕ Astonishingly accurate modelling of your own hardware, at home
⊕ Supplied tone models sound authentic and rich
⊕ Ever-growing online library of downloadable presets
⊕ Hand-holds you through what is quite a complex process

IK Multimedia’s Amplitube has for many years been at the cutting edge of software-based guitar amp and effect modelling, with hundreds of virtual components available including Signature chains from established artists. With the release of Tonex, the developer takes things to the next level by giving users the ability to actually model their own hardware. This is something of a holy grail for emulation – while developers have been able to analyse and recreate the sound of hardware, it’s a long and complex process and one that’s inaccessible to regular users. Or at least, it was until now.

So how does it work? Okay, hold up – before we get to that, let’s look at the conventional aspects of Tonex. The Player section is like a simpler version of Amplitube where you can choose from a selection of amp and cab models. This varies based on the version you have purchased, with the free version having 20 tone models, 10 amps and five pedals, and the biggest Tonex Max package having 1,000 tone models, 100 amps and 50 pedals. The three paid versions include the ability to model your own gear but the free version doesn’t. 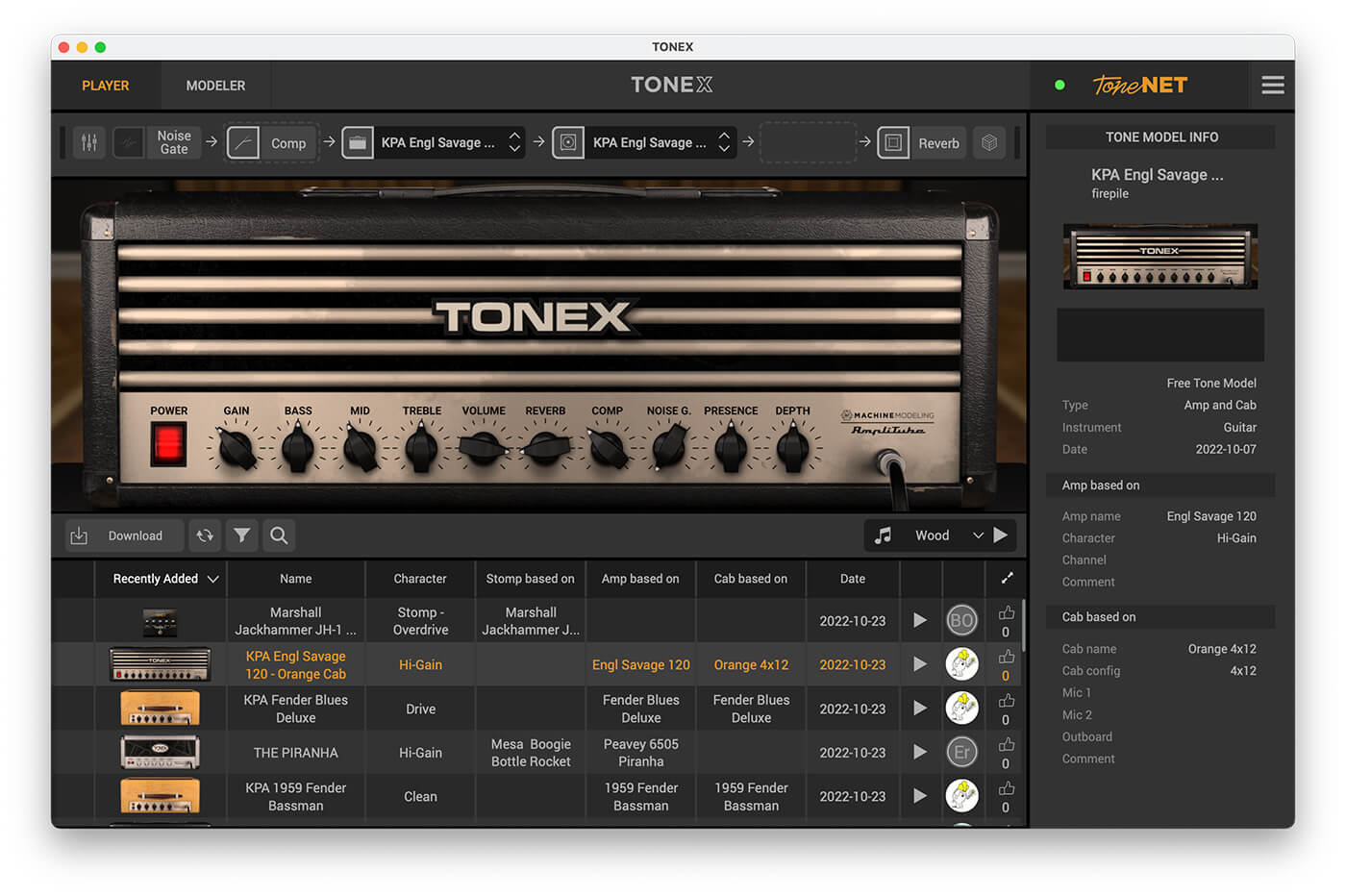 The virtual gear has recognisable controls for EQ, tone, volume and the like, and the Player’s toolbar has a set of standard effects including noise gate, compression, reverb and mic selection and placement. This all makes it a competent effects processor whether used in standalone or plugin mode, and the tones are as authentic as expected from a company with IK’s superb track record in this department. Rich and sonorous when applied to everything from jazz through blues, rock and metal, the guitar and bass tones sound just like the real thing.

You can access the ToneNet service from inside the app, which connects you to an online database of patches and tones that other users have created and shared, and you can share your own – complete with lots of embedded details and social media links. Presets are shown inside the app though it’s also possible to open the site in a web browser which makes navigating and searching a little easier. Both search views have filters available so you can cut more quickly to the terms you want. 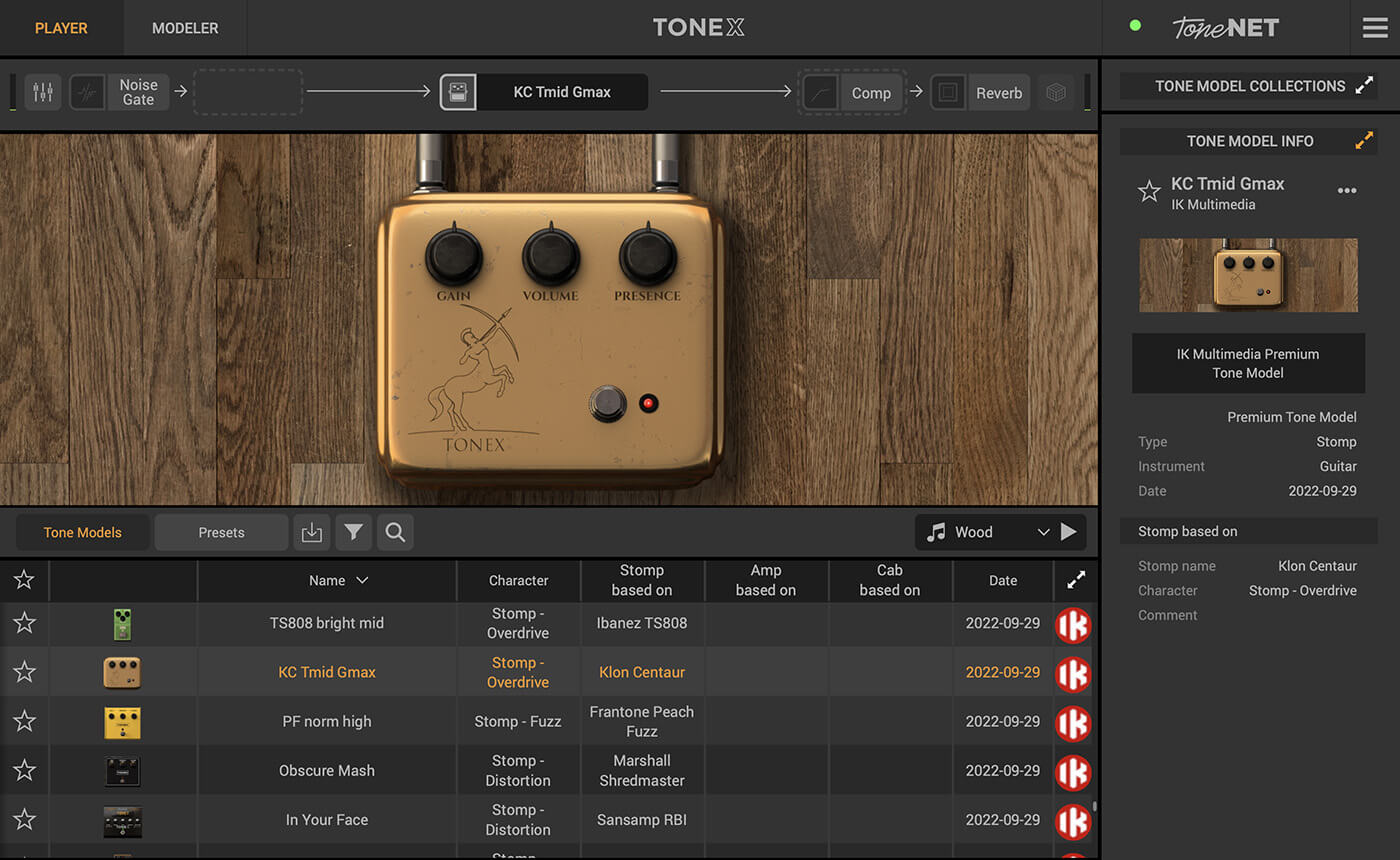 The revolutionary part of Tonex isn’t its ability to load virtual signal chains, as impressive as they are, but its new Modeller. The way this works is a little more complex than IK initially suggests in its marketing but still far easier than a bunch of programmers working for days or weeks. If you’re going to undertake this, a thorough read through the guide is a must, since there are several steps and it’s a process most people will have no real experience of.

Essentially, it works like this: You will need to connect your audio interface to send signal out to a reamplification box connected to your amp, stomp box or combined setup, then record the signal back into your computer using either one or two mics or a DI box. The exact routings will depend on what you’re trying to do and this is all explained at length in the manual, though it’s relatively advanced stuff when you come to it for the first time. During the multi-step process you tell Tonex what you’re capturing, be it an amp and cab, an amp and stomp but no cab, and so forth, and it makes its settings accordingly. There are instructions about how to set levels for optimum performance and IK makes the Tonex Capture interface (249.99 Eur) with all the necessary connections in a single box, and the Axe I/O which is also suitable. You might have to buy a reamp box, however, if you don’t have one already. 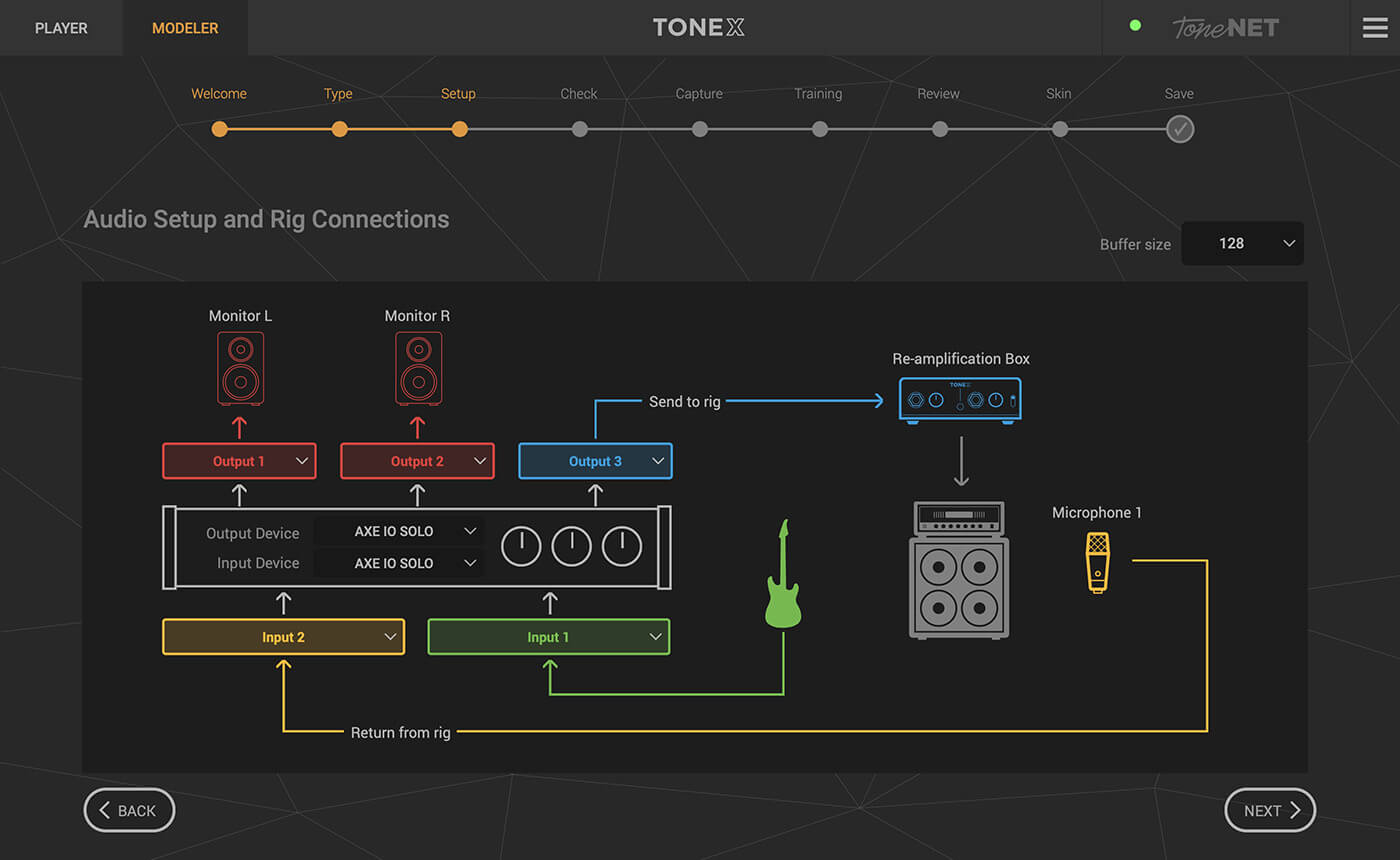 Once all that’s done, a specially-prepared sound is sent from Tonex out to your gear, and recorded back in. From there, the AI algorithms do their work in analysing and building a model of the sound. There are three quality settings and the process can take from just a few minutes up to a couple of hours depending on your computer and the complexity of the task. When we ran the process on a recent Intel MacBook Pro, it took around 15 minutes using the Default option. IK recommends using the Advanced quality setting for the highest gain tones to improve accuracy, but says that Default is fine for most uses.

When the number crunching has been done, there’s a chance to compare your actual rig with the model using a very straightforward screen. Play your guitar or bass live through the hardware and then click to switch to the model, and see how they compare. When we tried this with a Telecaster, Fender Twin and a saturation pedal, the results were astonishingly accurate. The setup all took a while – though this would likely speed up once you’ve done it a few times – and if Tonex hasn’t quite nailed it you can make tweaks and run it again. 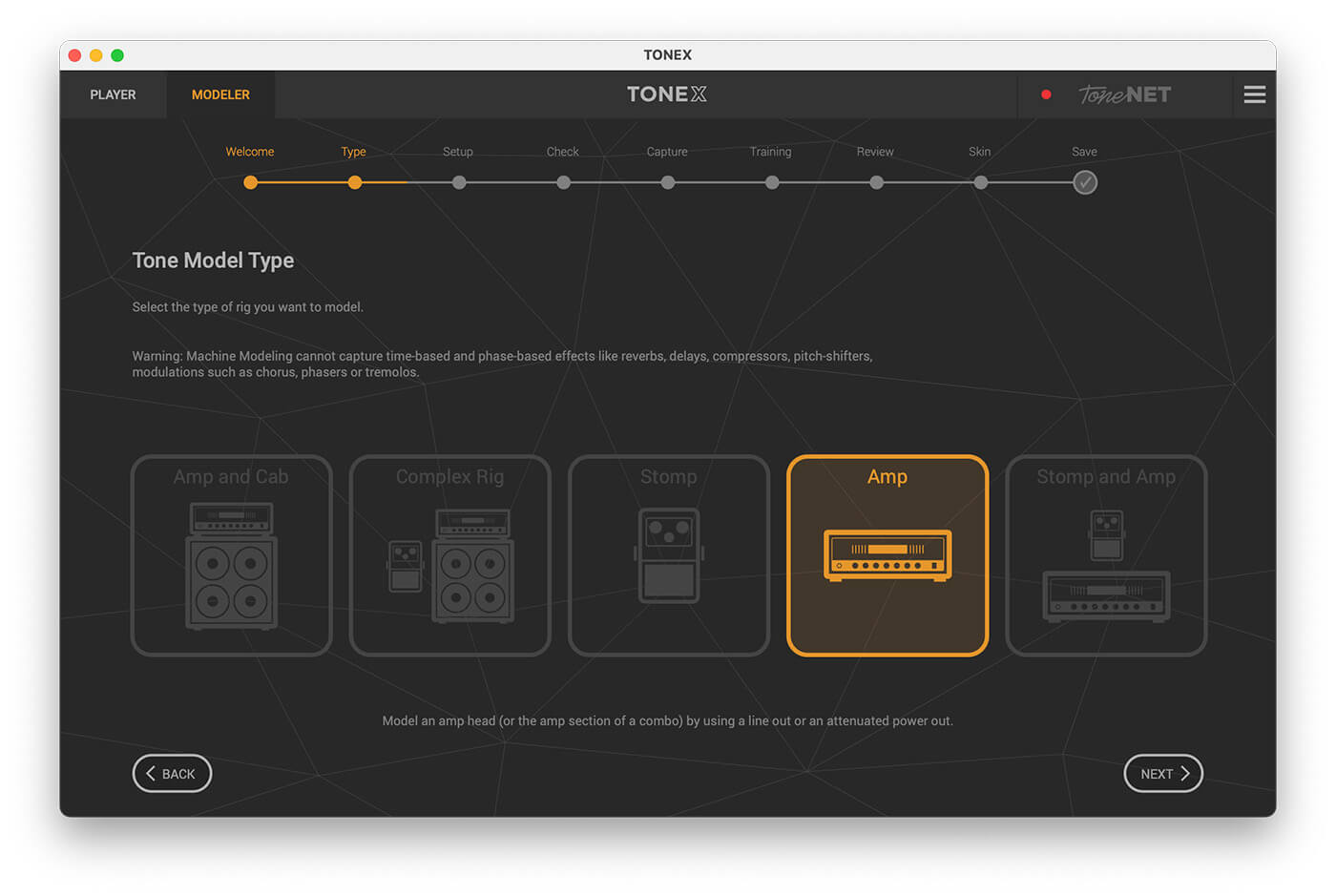 Once you’re happy, you can add a skin to the model so it appears in your library with nice, recognisable skeuomorphic graphics. There’s tight integration with Amplitube, and your models will be available there too with the added bonus of your being able to add the many extra modules available to create larger and more complex chains. There will be Tonex apps for iPhone and iPad too for on-the-move effects processing, though these weren’t available at the time of review.

The ability to accurately capture the sound of your guitar hardware will be a godsend for many, especially touring musicians. No longer will you have to cart all your dusty gear around if you don’t want to, but neither will you be relying on generic models – you’ll actually have the sound of your own gear. For non-touring players, the benefits are equally clear. You won’t have to rig everything up to practice, or to record, or to jam round at a friend’s house. Once you have created your models, they’re just a click away. There’s an important caveat in that Tonex can’t model time- or phase-based stomp effects like compressors, reverbs, delays, chorus or phasers. That’s unfortunate and will dismay some, but it’s a limitation of the technology. That aside however, Tonex represents a quantum leap forward in tone capture and modelling for guitar and bass players. 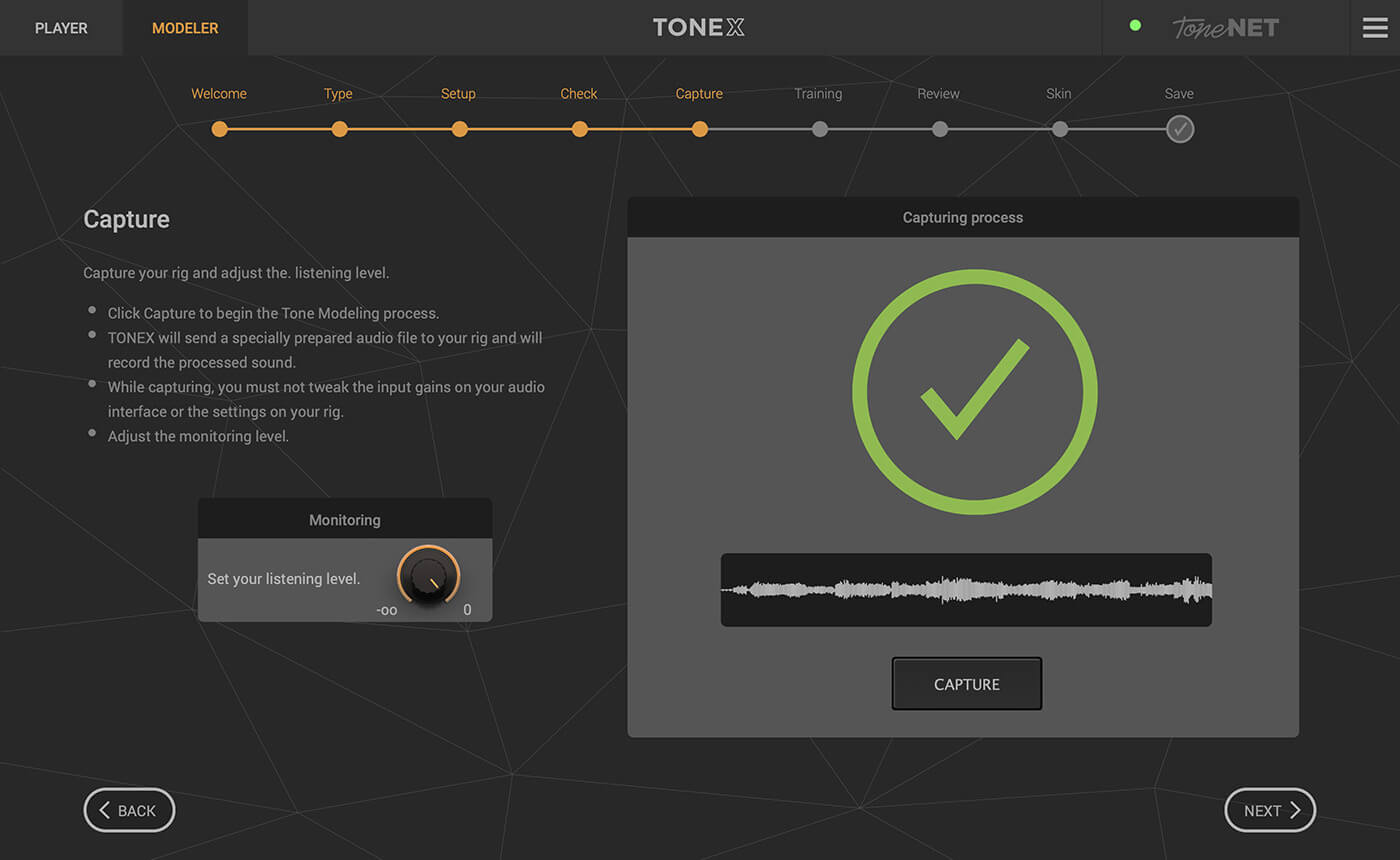