IK’s bass behemoth gets a major upgrade with acoustic models, loops and more articulations than ever. Could it be the ultimate virtual bass instrument? 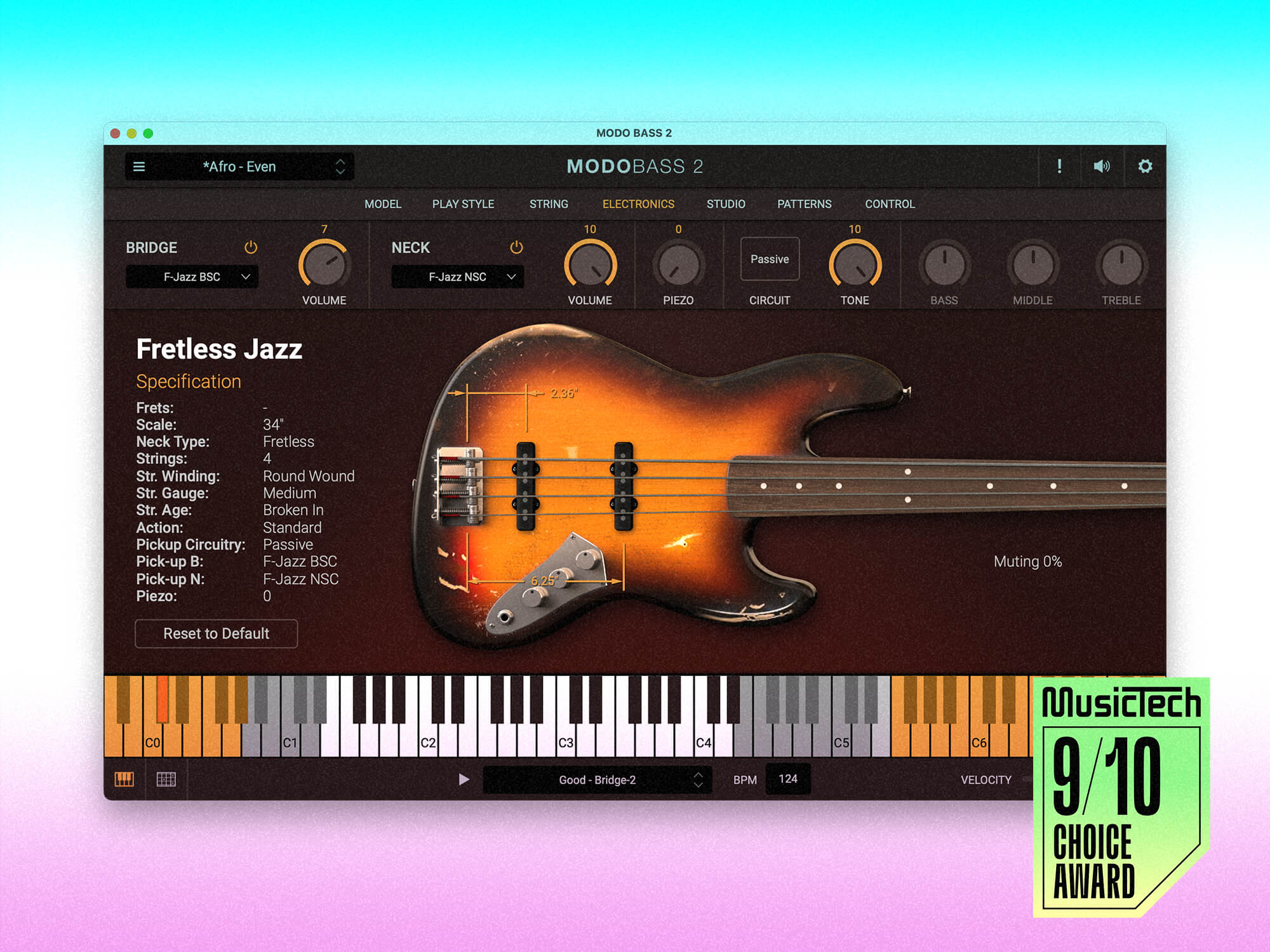 ⊖ Some more amp models would be nice

It’s been over five years since we reviewed the first version of IK’s Modo Bass and since then, the bass guitar has remained one of the least-emulated instruments. You can find a wealth of virtual pianos out there but much fewer virtual basses. As with most stringed instruments, the trick has always been getting the nuances right – the small inflections, the different slides and picking types that make a bass sound real and not mechanical when played.

Like its predecessor, Modo Bass 2 uses real-time modelling synthesis to generate sound rather than a large library of samples and so weighs in at a slender 200MB. It runs as a standalone app and also as a plug-in inside your DAW, with mono and stereo versions available. To the existing lineup, it adds eight new bass models for a total of 22, all fully configurable, of course.

There’s now a free version of Modo Bass with a single bass model and this uses IK’s Custom Shop system to let you purchase individual basses if you prefer, as well as an SE model for half the price of the full version with a smaller selection of models. Included in the six new electric basses are two fretless models: Fretless Jazz, inspired by Jaco Pastorius’ customised Fender Jazz, and Fretless Bass Man, inspired by Pino Palladino’s Music Man Stingray. A new feature allows you to make any bass fretless by just clicking a button in the SE and full versions. When you’re generating everything in real-time this sort of thing becomes possible – though the maths behind it is probably pretty terrifying. 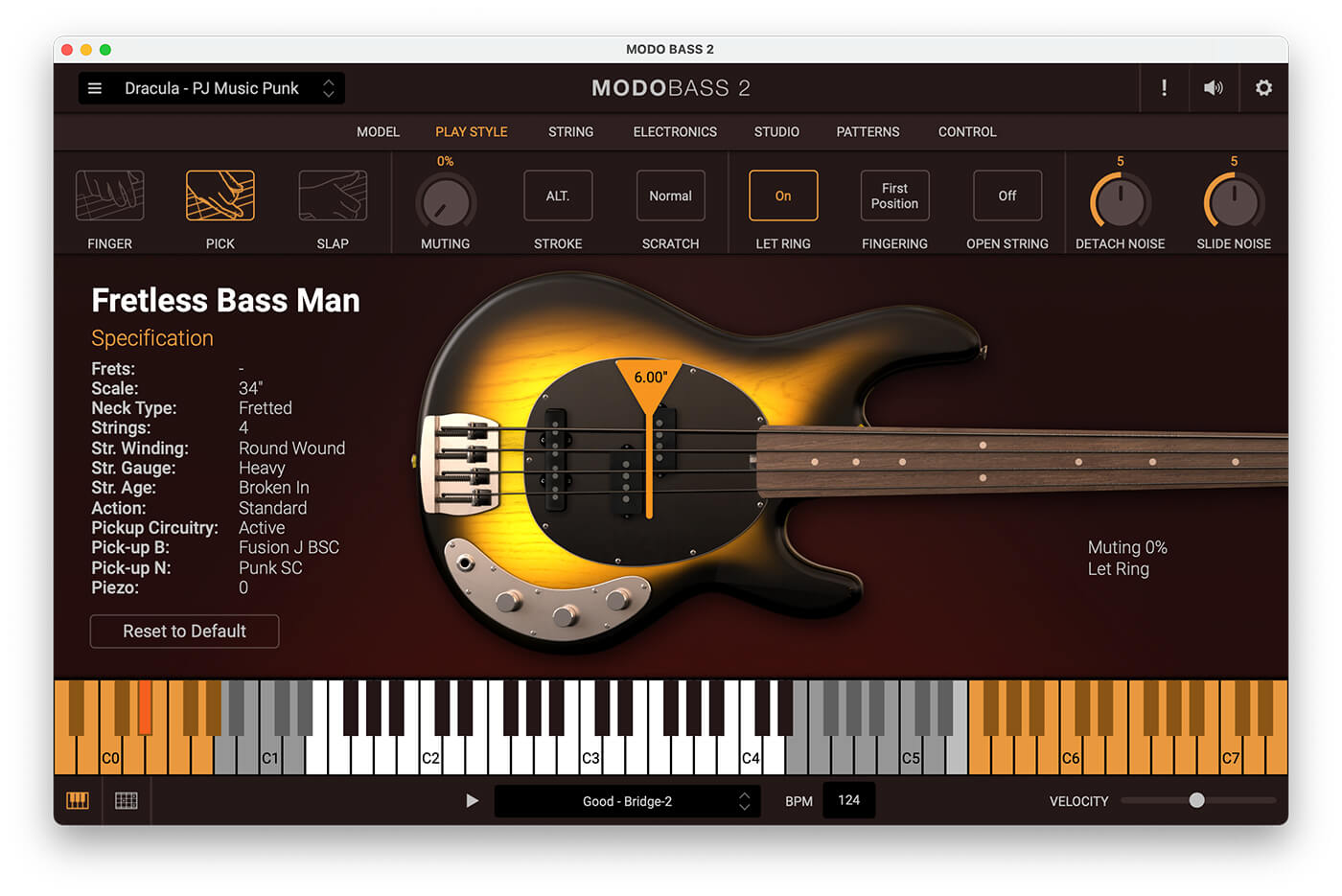 Version 2 also brings two double bass models to the app, a welcome addition that truly expands the sonic palette beyond rock or blues and into jazz or acoustic music. There’s Rockabilly, a more stately Studio Upright model and, in the Studio section of the app, you can move your virtual microphones around for different sounds, blend in a piezo signal and a pair of room mics as well as taking advantage of the stomp box selection that’s available to all basses. You can run any bass through a virtual amp and cab, too, with sonic controls easily accessible for both as well as for the four pedals which can load bass-centric processors like octaver, distortion, eq, comp, chorus and more. 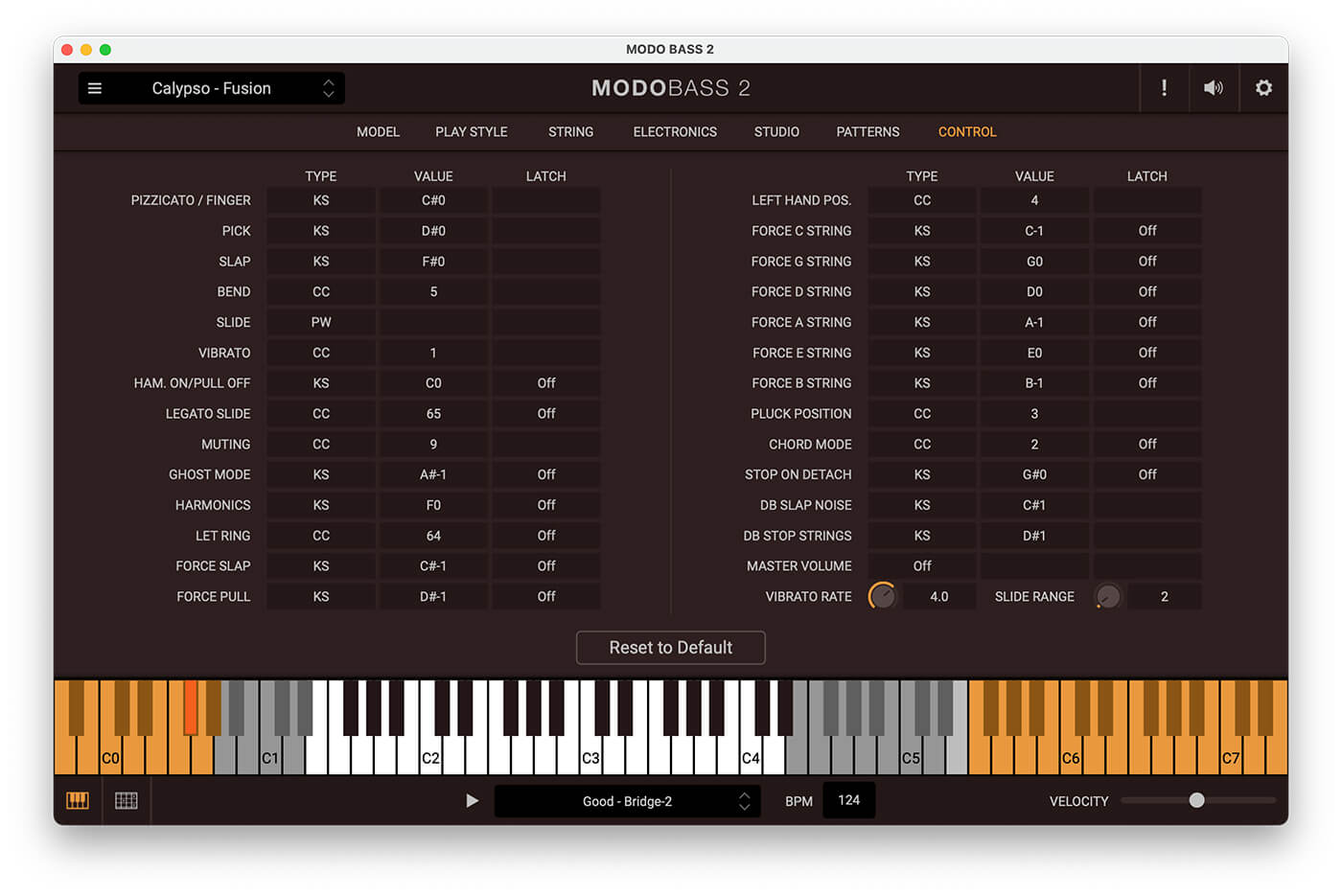 Changing these performance parameters can help breathe life into existing MIDI parts, livening up the simple MIDI input with virtual articulations. They’re also handy when used with the new Patterns section, a built-in library of bass grooves played by professionals and searchable using a range of factors such as style, length, key, number of bars and so on. These are varied and useful and cover a range of genres with intros, breaks, verses and more for each ‘song’. You can sync them to your tempo, alter their playback velocity and drag and drop patterns directly into your DAW or to your desktop as MIDI files. 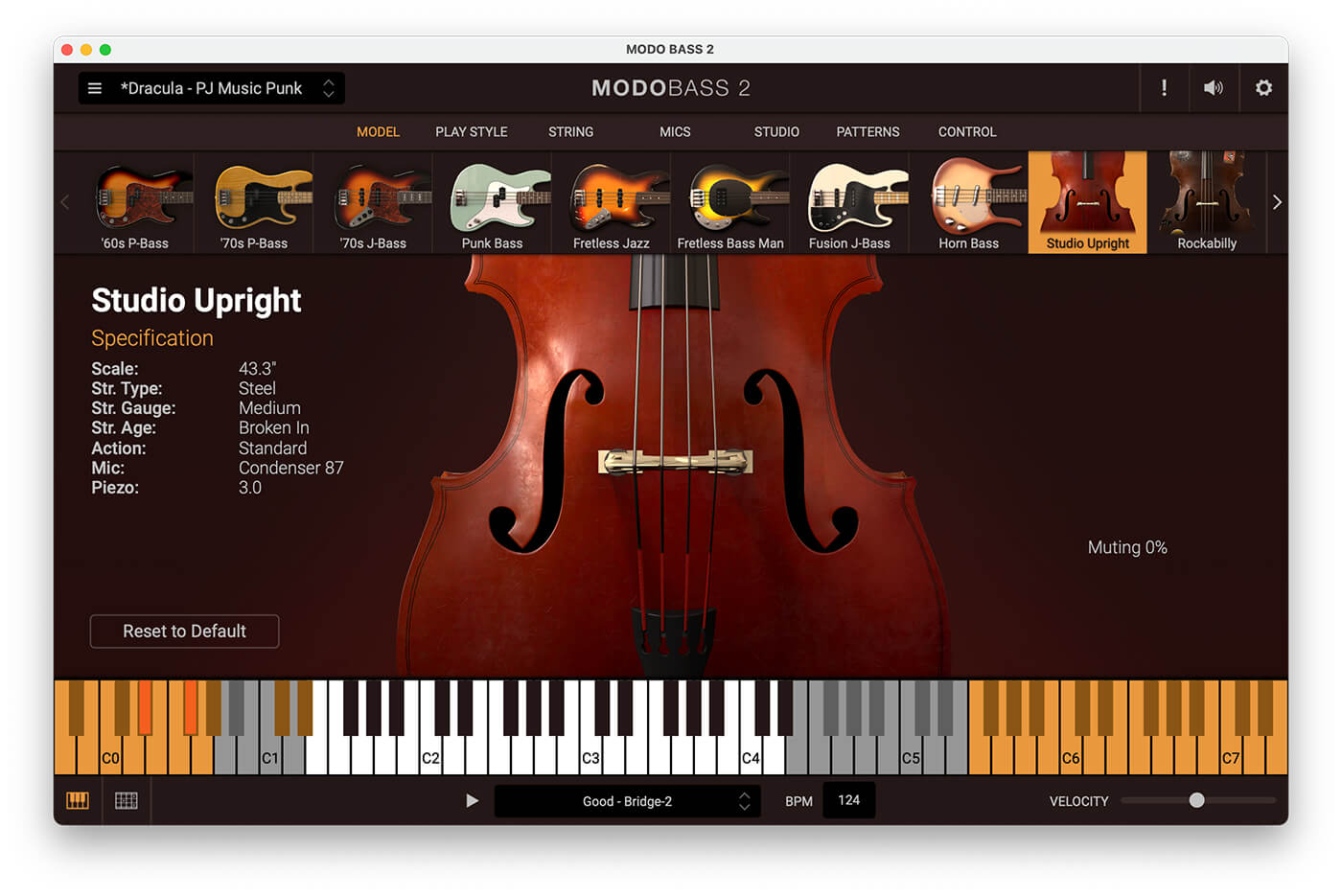 Within each bass is even more customisation controls, starting with the strings. Any bass can be made four-, five- or six-string and each can be drop tuned to extend its range. You can select the gauge and the age of the strings and even their physical construction, along with the bass’ physical scale length and the distance between the strings and the fretboard.

In the Electronics section, the pickups and wiring can be tweaked, each model can have one or two pickups and you can choose from 32 pickups for any bass. Electronics can be active or passive and there’s a parametric EQ at this stage, too. Last but not least is a powerful MIDI Control section where you can remap keyswitches or assign your own MIDI controls to automate or trigger creative performance changes during playing, like phrasing, playing style or position and much more. 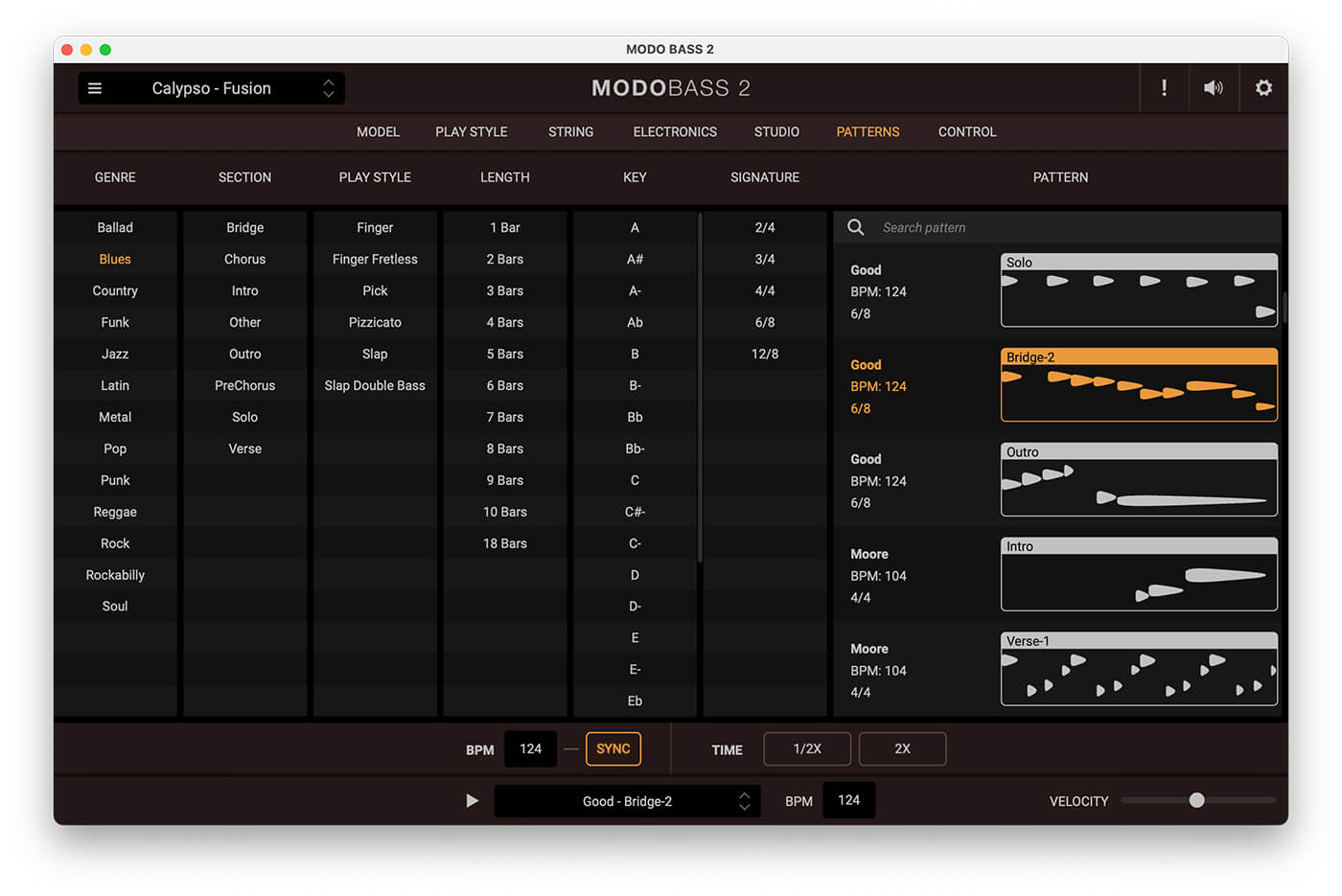 Modo Bass 2 sounds authentic not only thanks to its audio engine but also because of the clever articulations you are able to achieve either by setting them globally or changing them dynamically during playback using keyswitches. Generating the sound using DSP rather than basing it on samples enables IK to be far more flexible when it comes to making subtle or more noticeable changes to the sound of notes. Playing one of the basses using a keyboard, the differing styles can mean that your parts sound a little mechanical, but this can be fixed by altering the playing style and other tweaks.

The bass sounds range from picky and rocky through smooth fretless to classy double bass. The stomp boxes and amps lend a grittier edge to proceedings, while the virtual mics can be quite freely positioned to change the character of the sound. You’ll probably want to tweak the presets a little to suit your tastes, but they sound awesome right out of the box. Since everything can be changed and you can imagine your own basses by adding pickups, making it fretless and so on, there’s a lot of sonic experimentation possible.

Whether you’re making rock, pop, blues or other similar styles of music, Modo Bass 2 will give you all the bass flexibility you need without ever needing to play or record a real bass guitar.