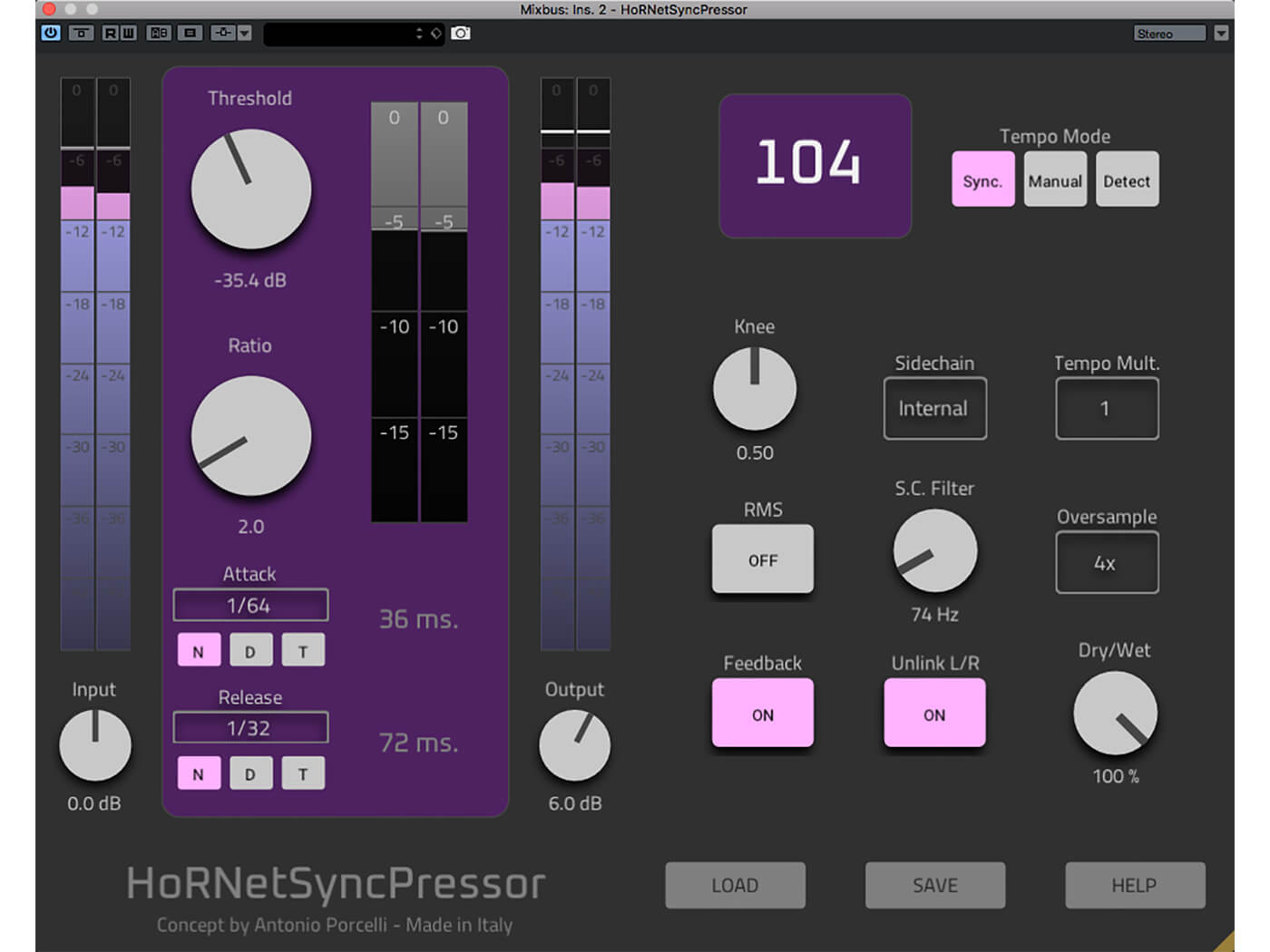 Bus compression, analogue and digital, has long existed in the shadow of the SSL G Series classic, so it is refreshing not to see its industry-standard features replicated in the SyncPressor from HoRNet Plugins. What’s different about this compressor is that it uses tempo as the basis for attack and release times, and has several other unusual parameters for shaping its rhythmic response.

The Tempo Mode switches, for example, allow for host sync detection, manual input or automatic detection based on the audio input. Also, there is a tempo multiplier button to halve or double the attack and release settings.

The non-temporal parameters are equally comprehensive, though the simple, scalable UI prevents this from overwhelming users. The standard set of input/output gains, threshold (1:1 to 20:1), sidechain HPF and mix are accompanied by switchable RMS detection, feedback on/off, knee, dual-mono mode and oversampling (up to 16x).

There’s plenty to enjoy for those who like to mix into a bus compressor, though some controls produce a more dramatic effect on the outcome than others. Toggling RMS detection and feedback alter the transient response from punchy dynamism to a fuller, smoother response, whereas unlinking the L/R detectors in the sidechain can help keep a mix wide. Oversampling trades accuracy for CPU load with 4x providing a good middle ground. With no oversampling, a certain grittiness comes to bear, too, if that’s your thing.

The attack and release tempo options run from 1/1, i.e. a whole beat, to 1/512, which equates to 3ms at 120bpm. You can quickly shift to the triplet and dotted variants, and the resulting time is displayed to the right in milliseconds.

The main question is whether tempo-related attack and release times provide an advantage over millisecond values. For mixing, the attack times I find appropriate tends to be in the 1/64 and 1/128 range, depending on the bass content and tempo, which means I just keep erring towards the 20-40ms range.

For individual mix elements, such as bass and sustained instruments, the slower settings come into play, using the actual rhythmic measurement to help jigsaw parts around each other.

Release time is equally vital for individual sources as it is for the entire mix. This is especially the case for genres with repetitive beats and swelling synths that need merging on the mix bus. In these genres, release becomes the primary dynamic shaper that defines how the mix blooms after a transient.

In setting these timings, the tempo multiplier earns its keep by allowing you to quickly compare faster/slower timings without having to change both the attack and release controls.

Across different mixes, SyncPressor is impressive, whether you are setting timings in musical terms or not, and we find that spending time on the RMS, Feedback and Unlink L/R controls as necessary (and rewarding) as the attack and release settings. SyncPressor is billed as transparent, and within the realm of dynamics processing, it is. However, over-compressing and setting super short attack and release times will still garner some crunchy ‘colour’. It delivers a rock-solid mix glue that is far more flexible than your average SSL G series bus comp emulation, and it’s remarkably well priced.