Heavyocity brings its cinematic sound-design credentials to the world of distortion with Fury. 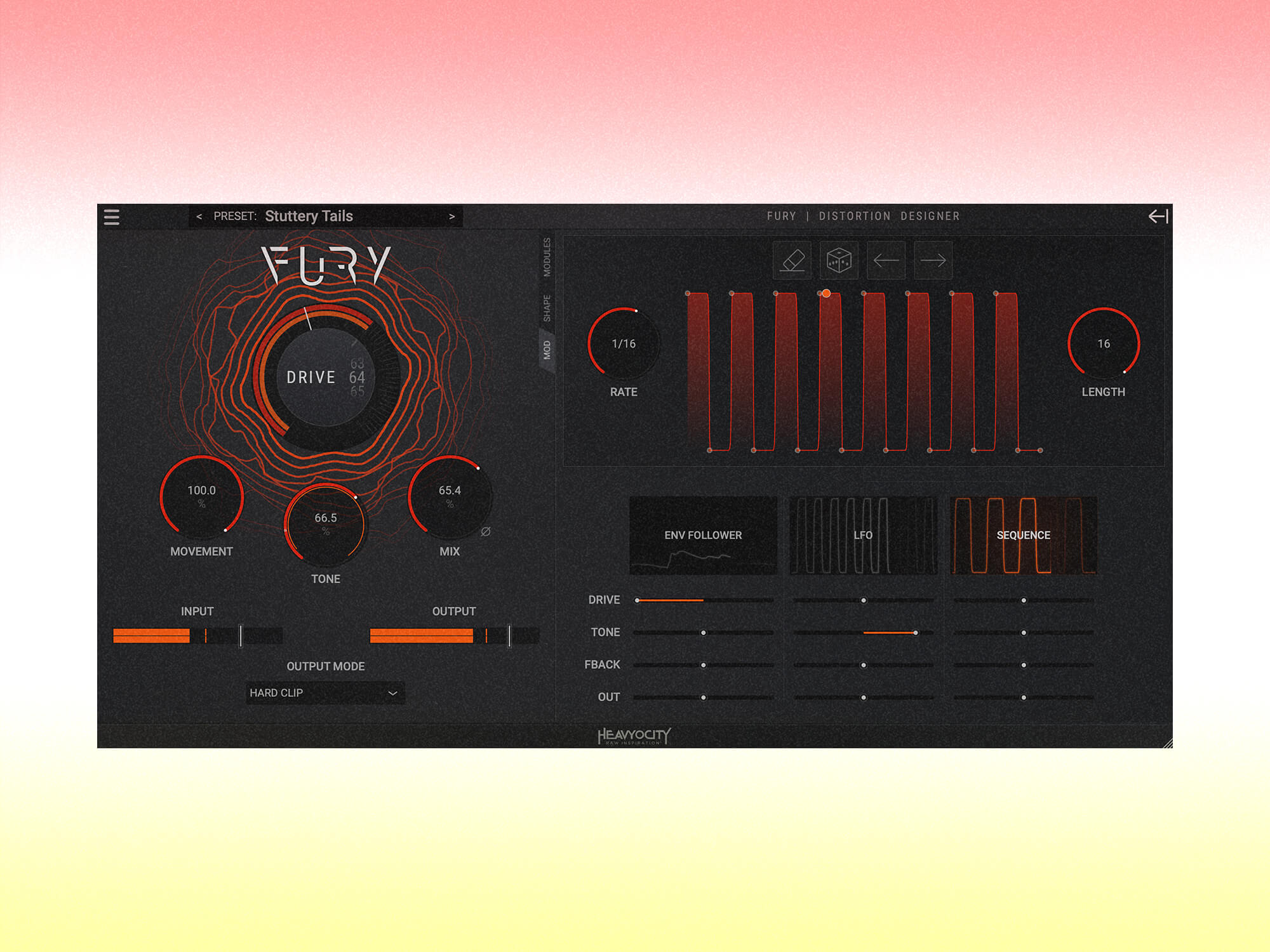 Producers have been spoiled in recent years with beautifully modelled analogue saturation plug-ins, as well as more complex distortion sound-design tools. Powerful CPUs make it possible to generate rich, organic-sounding harmonics that can bring your audio to life in ways that the old, flat and more digital-sounding plug-ins couldn’t.

With Heavyocity’s new modular distortion, you can combine 29 modules to create more than 700 variations. The sound quality is excellent and the interface is pleasant but a few workflow issues hold it back from sheer greatness.

Heavyocity has a knack for crafting epic and highly processed cinematic sounds. Its multi-effects plug-in Punish was tailored for this kind of upfront processing but, where that was more of a channel strip, Fury focuses solely on distortion and saturation. (If you already own Punish or Punish Lite, you get an additional discount on Fury too.)

The resizable GUI looks good in dark grey, red and orange. The main controls are featured on the left and cover drive, tone, mix and movement, as well as input and output levels. There’s also a drop-down menu that lets you choose from Hard Clip, Soft Clip, Limit and Through on the main output, plus a cool circular meter that shimmers in reaction to the signal. It’s frustrating that there are no numerical values on the input and output sliders, which means making adjustments can be fiddly. To the right are three tabs that let you tailor the distortion sound to your liking. The most important, the Modules tab, is perhaps Fury’s most unique feature. Here, you’re presented with eight options for drive mode, 15 for distortion and six for tone, and you can choose one of each.

Drive determines how the signal is driven into the distortion, with Clean, Mellow, Mid+ and Rodent options. This lets you pre-load the distortion with a specific characteristic such as a mid-frequency boost or subtle mud reduction.

The distortion mode is the clipping circuit itself and includes several tubes, fuzz, console, bit-crush, fold and tape options, plus an especially tasty broken valve that breaks up more easily than the others when pushed hard.

Finally, the tone section functions like a one-knob filter/EQ that affects the sound after the distortion, and allows you to add sweeps and shape sounds via the Tone dial. With all these options, it’s easy to get lost. Thankfully, an info panel displays a description of each module when you hover over it. Clicking on different modules is a fun and fast way to explore combinations and arrive at different flavours of distortion and harmonics.

Fury’s algorithms sound superb on a diverse range of material. Whether it’s adding low-end analogue fatness to basses or out-and-out high-end destruction to drums, the sound is crisp and characterful. Heavyocity hasn’t stated whether there’s any oversampling going on under the hood but, with the exception of a couple of the algorithms, most appear clean with minimal signs of aliasing. There are also 129 presets in six categories that showcase just how versatile Fury can be. We do, however, find the lack of an internal, latency-free bypass button and any kind of volume compensation a little frustrating. These features would make A/B’ing settings and presets a lot smoother.

Once you’ve chosen your main modules, you can turn to the Shape page for further tweaking. The first control here lets you choose whether the incoming signal is split into left/right or mid/side, and then lets you adjust the balance ahead of it hitting the distortion circuit. This allows you to focus your distortion on different parts of the stereo field. Next, there’s a gate with threshold and amount for reining in the distorted tails. Apparently this also functions as an expander but we had trouble getting it to do so effectively.

Then there’s the input EQ, which can be switched between low and high shelfs, or low-pass and high-pass filters. With this, you can push or pull the distortion effect across the spectrum, and each type has an alternative mode that uses additional shelving EQs to rebalance the signal after the distortion. There’s also a clean-up EQ that can be used to target and reduce unwanted mud or shrillness. These EQs are useful for further shaping your sound but we’d love more visual representation here to help speed up the workflow. There’s a large spectrogram showing the input and output signals that could’ve been a prime candidate for a more hands-on and graphical approach to the pre- and post-EQ.

Fury’s Character dial changes depending on the selected distortion module but mostly controls the distortion’s symmetry. Above this there’s the Feedback dial, for adding thickness and squealing. You can also use the gate to tame the signal fed into the feedback loop, and reduce the amount it rings out.

The final page of Fury houses the three modulation sources: an envelope follower, an LFO (with its own secondary LFO for creating more complex mod signals), and a 16-step sequencer with flexible curves between each step. Each can be set to modulate the drive, tone, feedback and output volume via four bipolar sliders, and all modulation amounts are scaled via the main Movement dial.

These features are fantastic for adding subtle movement and creating unique rhythmic patterns. However, with only four destinations, it feels a little limiting – it would open things out more if you could modulate the feedback, character and overall mix amount too. Also, there’s no sensitivity control on the envelope follower, which means you have to adjust the main input to get the optimum response, which will subsequently have an effect on the amount of drive.

There’s no denying that Fury sounds superb but it’s up against stiff opposition in a crowded distortion market that includes FabFilter’s Saturn 2 (£109), Output’s Thermal (£131) and Minimal Audio’s Rift 2 ($129). There’s also Arturia’s recently released Dist COLDFIRE (€99), which is both cheaper, and arguably more intuitively designed and feature-packed than Fury.

Issues aside, Fury has a unique take on the distortion sound-design workflow, which may lead you to new places. There’s also a demo version that runs for 15 minutes at a time, so you can test it out for yourself. The way it breaks up and squeals when you hit it a certain way helps it feel like you’re working with analogue gear. Although it can be subtle, Fury excels when pushed in more aggressive ways and, unsurprisingly, would be an asset in cinematic sound design.