With its follow-up to 2011’s block-rocking beat-maker, Heavyocity is hoping to double the damage and double the fun. 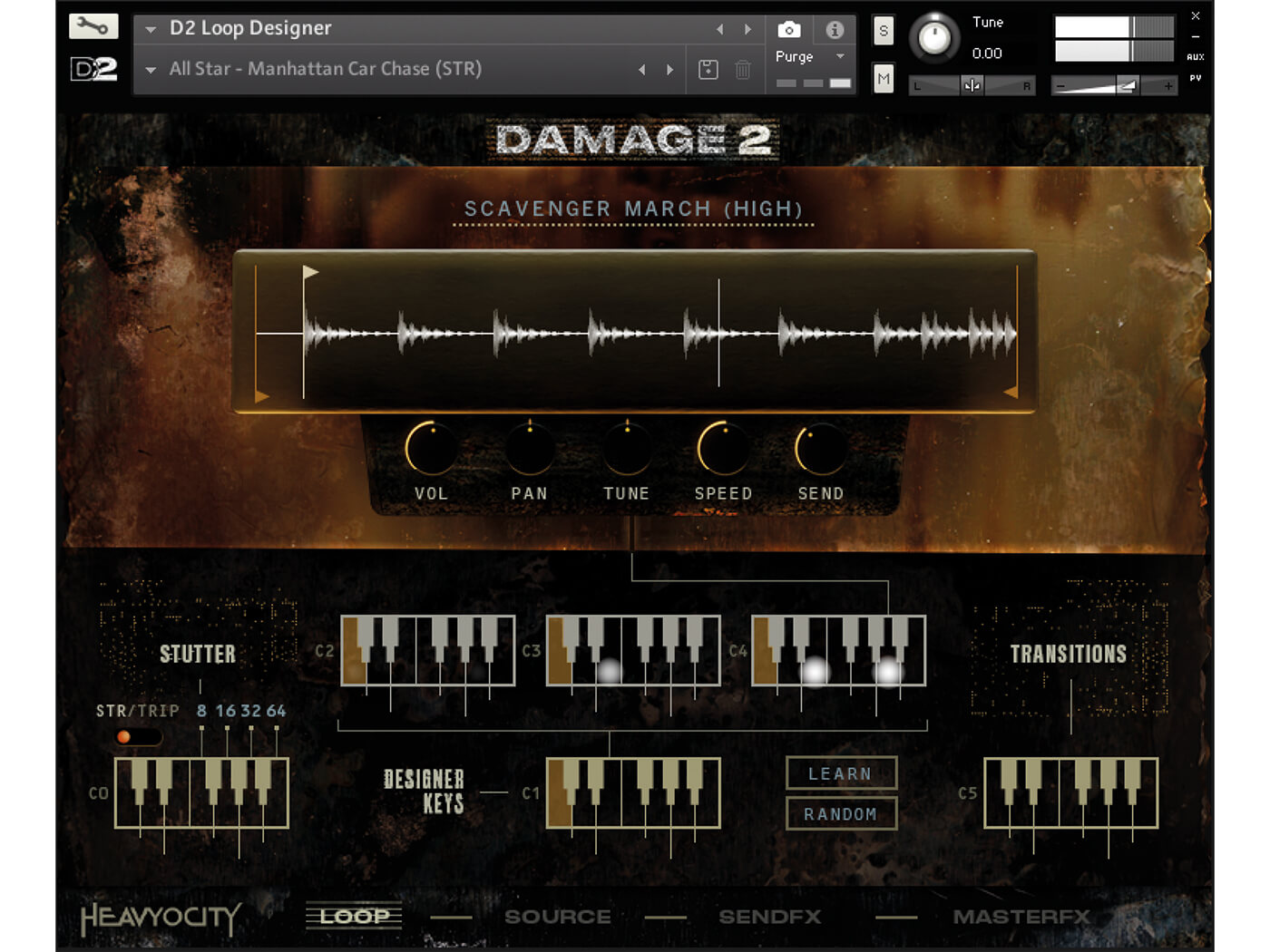 Released in 2011, Heavyocity’s Damage quickly acquired must-have status following positive reviews from all corners of the industry. The sample library set a new standard for hard-hitting percussion, and its depth, tone and raw power have been heard across thousands of TV scores, film and video game soundtracks, sound design projects and pretty much anywhere else where weapons-grade percussion is required.

Almost a decade on, New York-based Heavyocity has released a sequel. Damage 2 represents not only an update to the original library but a brand-new one in its own right, recorded at the legendary Skywalker Sound studios. Just watching behind-the-scenes footage of the microphone assembly for this recording session is enough to whet the appetite. These sounds were created via 84 microphones, two truckloads of heavy percussion instruments and a collection of trash-based found-sound percussion, which is what helped the original Damage cement its reputation. But can Damage 2’s sound match up to the grand scale of these recording sessions? And can this library possibly deal the kind of damage to its industry rivals as its predecessor did? Let’s see. 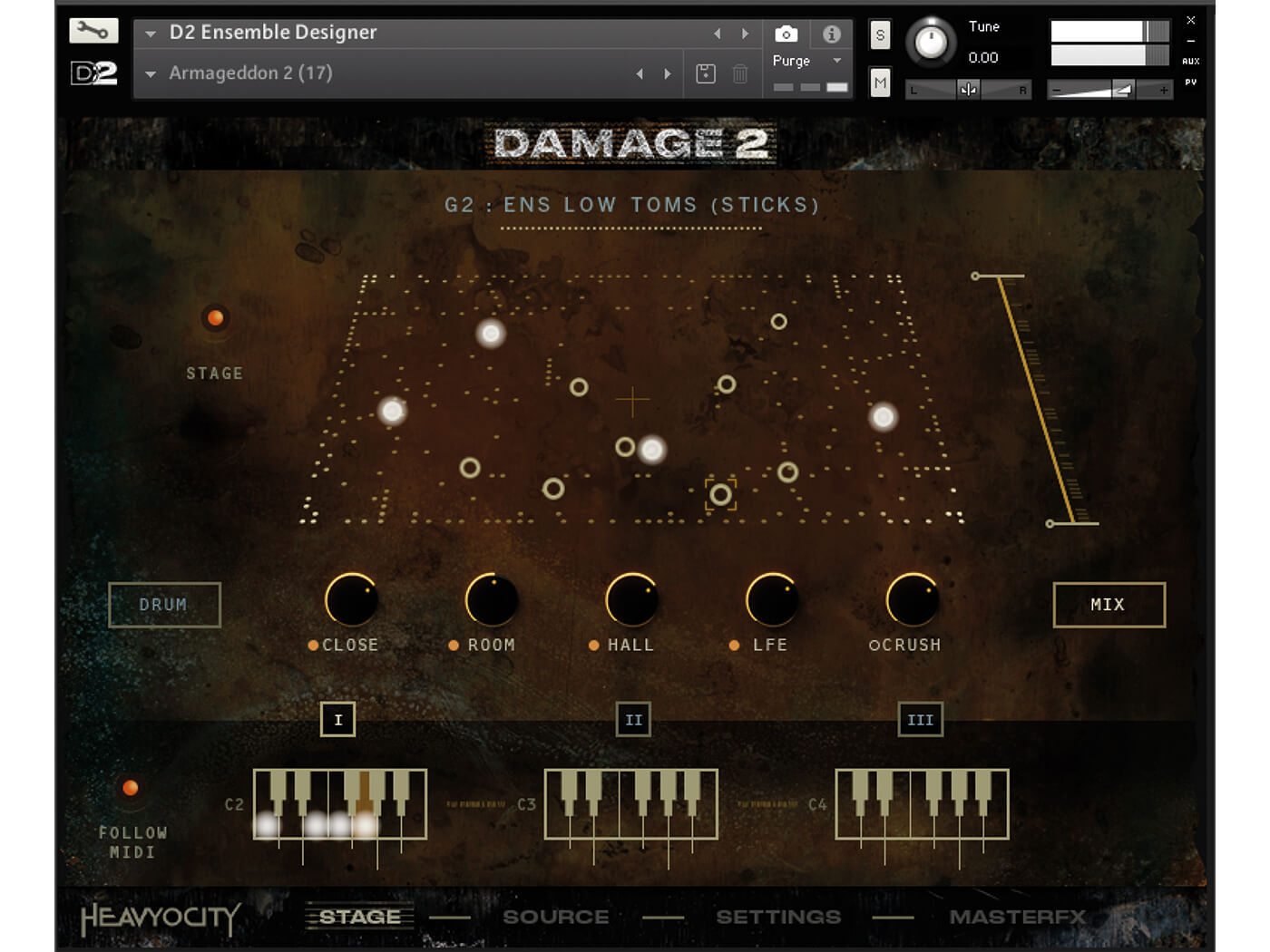 Smash the place up

Whereas the original Damage library offered a variety of kits and loops in themed sections, Damage 2 has a total of three programs to be loaded within Kontakt: Ensemble Designer, Kit Designer and Loop Designer. Double-clicking the Ensemble Designer is perhaps the best place to start, especially if you want to build a percussion palette from the ground up. In the opening preset, three groups of sounds are loaded in consecutive octaves: low drums from C2 to B2; mid drums from C3 to B3; and higher percussion from C4 to B4. There’s a total of 12 drums in each sound category, then.

Towards the bottom of the interface are four pages. The first, Stage, allows you to position each drum at a specific place on the soundstage, both from left to right and front to back, with the microphone mix changing as you push sounds around the dimensions. Damage 2 provides much more visual feedback than its predecessor, using MIDI triggers not only to inform you of exactly which drums are playing on each key but also letting you track down each drum’s soundstage position easily. The middle of the interface provides access to rotary dials that set the microphone mix, with separate sources for Close, Room, Hall, LFE, and a separate dial for Crush. Each microphone section can be set to taste or disabled completely.

When you first open Damage 2, the temptation will be to race through the presets or to just start bashing away at the loaded sounds. But we strongly recommended that you take a few minutes to listen to these drum recordings through their separate microphone feeds, as you’ll soon be in awe of what Heavyocity has achieved here. The flexibility is extraordinary and, as with all critical drum recordings, hugely different percussive tones are available depending on your favoured blend of microphone sources. Even the Close microphones sound punchy and useful when solo’d, which isn’t always the case in other percussion libraries. On the left-hand side of the interface, the Drum button lets you tailor drum-specific choices for volume, tuning, low and high tone, and attack and decay. 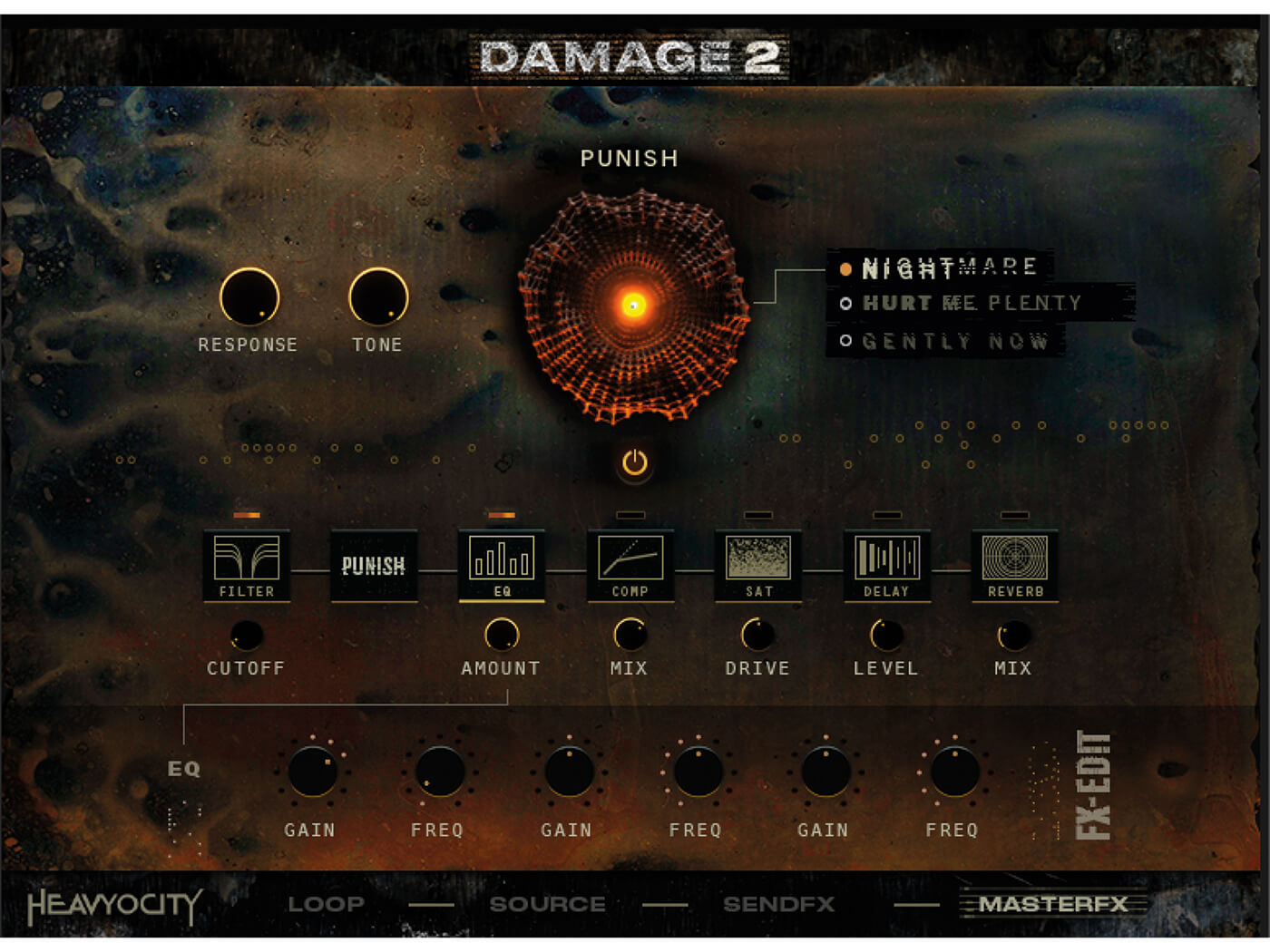 Ensemble Designer gets its name from the source pane at the bottom. Here, you can drag and drop drum sources of your choice into any of the slots in any of the octaves, and there’s a handy audition feature that lets you preview sounds before assigning them to your ensemble. Sounds are organised into assorted categories, with a generous number of source drums in each.

You can do this for each ensemble group in turn and, again, MIDI triggering is your friend here, both for identifying each drum and for swapping out replacement pieces in a heartbeat. The settings pane provides both global and per-drum controls but, most importantly, introduces Damage 2’s performance pane, where crescendos, swells, flams, rolls and repeats can be added to any individual drum source.

The parameters on offer within each of these options varies from one playing technique to the next but crescendos and swells can be set across a specific number of beats (up to two bars clocked from your host’s tempo), while the flam options let you bias volume towards or away from the second flammed hit, with variable speed between the two. It’s hugely powerful stuff.

The original Damage had its infamous Punish wheel, with which you could introduce brutish distortion. Here, Heavyocity hasn’t just doubled the damage, it’s tripled it, with Damage 2 featuring three distortion alternatives – Nightmare, Hurt Me Plenty and Gently Now – that range from merely intensifying to outright brutal. With these, there’s almost no end to the colours you can apply to your ensembles. 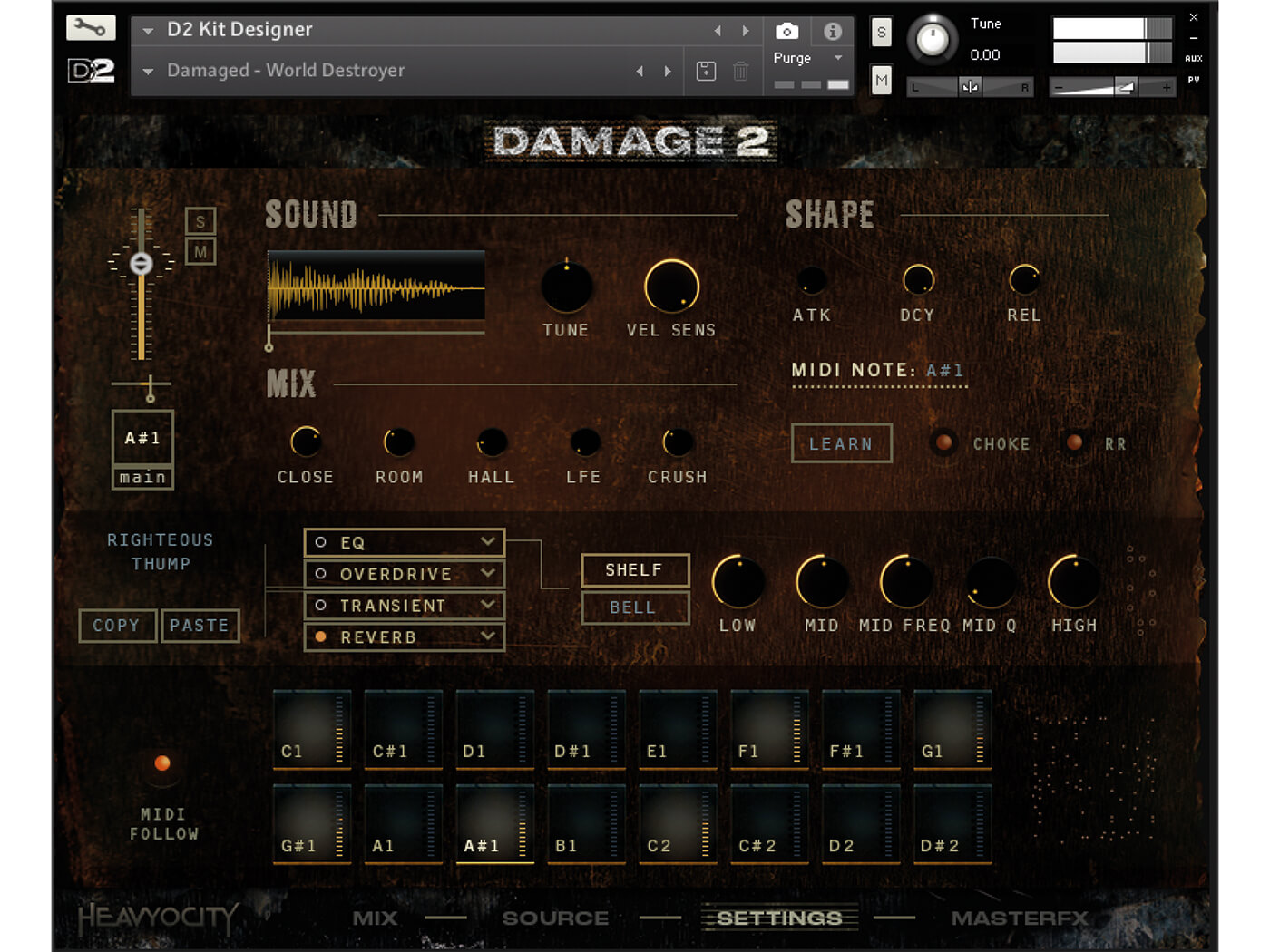 Distortion, however, is not the only effect you’ll find here. This page also features filter, tone, compressor, saturation, delay and reverb modules, all with tweakable parameters and all of which can be reordered if you want a different chain pathway. It’s impossible to overstate just how much flexibility Damage 2 provides from a drum viewpoint. Each sound is deeply sampled, with many velocity layers.

Depending on how you like to program, you can load the same sound onto consecutive keys for enhanced playability too. Of course, the speaker-shaking deep hits are all present and correct but here they’re better than ever. Plus, alongside them come pitched, wonky tuned cymbals straight from horror-movie scores, time-ticking tension-building sticks and a dizzying array of sounds in between.

As its name suggests, Kit Designer lets you take a more kit-based approach to sound design, offering pads onto which specific drum and percussion sources can be dropped. Each pad can have its own effects chain, while a mixer for each source lets you set levels for each element of a designed kit. As with the other programs, a host of presets lets you audition stylised content.

Though, again, creating your own kits is a simple drag-and-drop process. Another of Damage’s killer features was its range of ready-to-mix loops, which brought tempo-locked percussive grooves that ranged from weighty kits to skittering high-action top-end loops to your productions and cut through picture extremely effectively.

Damage 2’s Loop Designer offers new content along similar lines, adopting the Ensemble Designer’s approach of letting you load up to three ensembles of loops across three octaves from C2 upwards. There’s more here though, with Designer Keys triggering all key notes across all three octaves, so that C1 triggers C2, C3 and C4 together, for example, and a collection of stutter effects that can be thrown in, triggered from the keys in the octave below that.

There’s a massive collection of triplet-based rhythms alongside the more straight-laced ones too. From C5 upwards, you can load an octave of transition sounds, including swells, crescendos, risers, and deep hard impacts. Damage 2 is just as vital as its predecessor and you should ready yourself to hear it in trailers and action scores aplenty in the coming years. Heavyocity’s hard work has been repaid and it’s a joy to have an even more deeply and carefully considered percussion arsenal ready to go into battle with for another new decade. 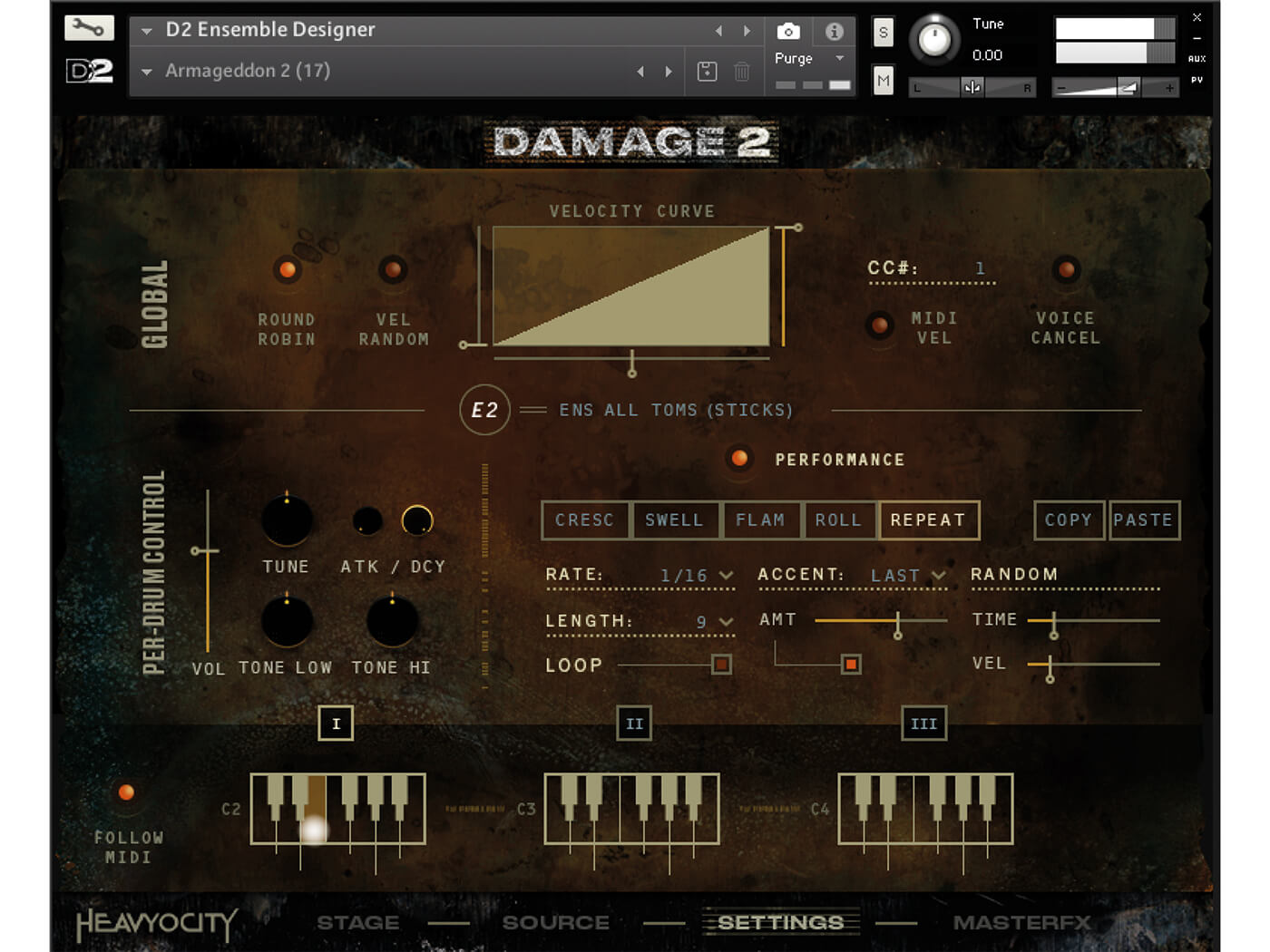 Damage set a new standard upon its release. As a result, Heavyocity’s competitors stepped up their game too – all of which means that competition is stiffer for its successor than it was back in 2011. Thankfully, Damage 2 picks up just where Damage left off, with righteous percussive sound sources that fit right into projects with little messing about.

These aren’t samples that need masses of work to be blended or mixed in. If anything, you’ll find yourself setting the rest of your mix around them. Unsurprisingly, then, they’re inspiring to play, whether you favour tempo-locked grooves or individual kits. Do you need this? Do you write trailer music or action-style cues? Then yes, you absolutely you do. 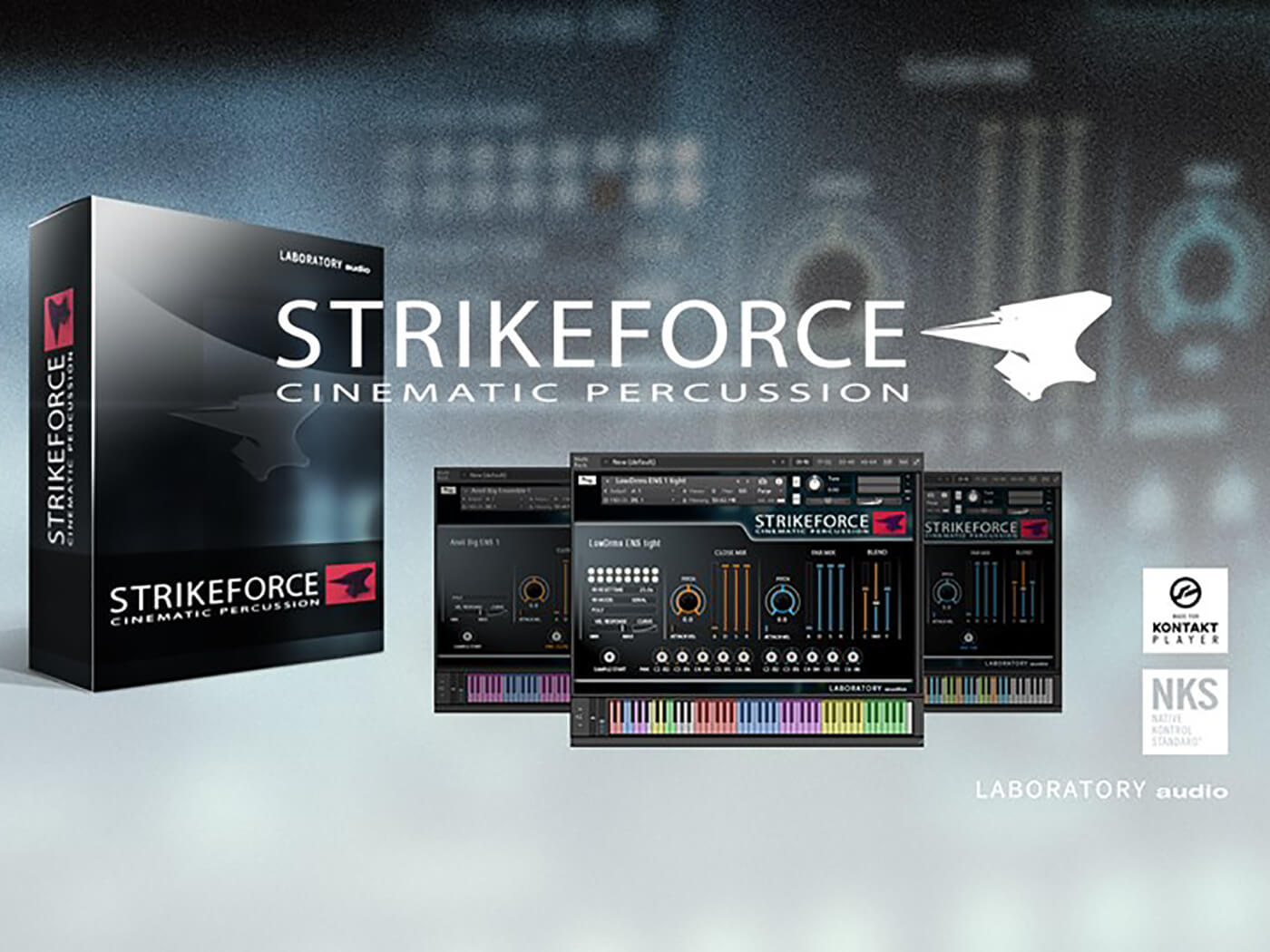 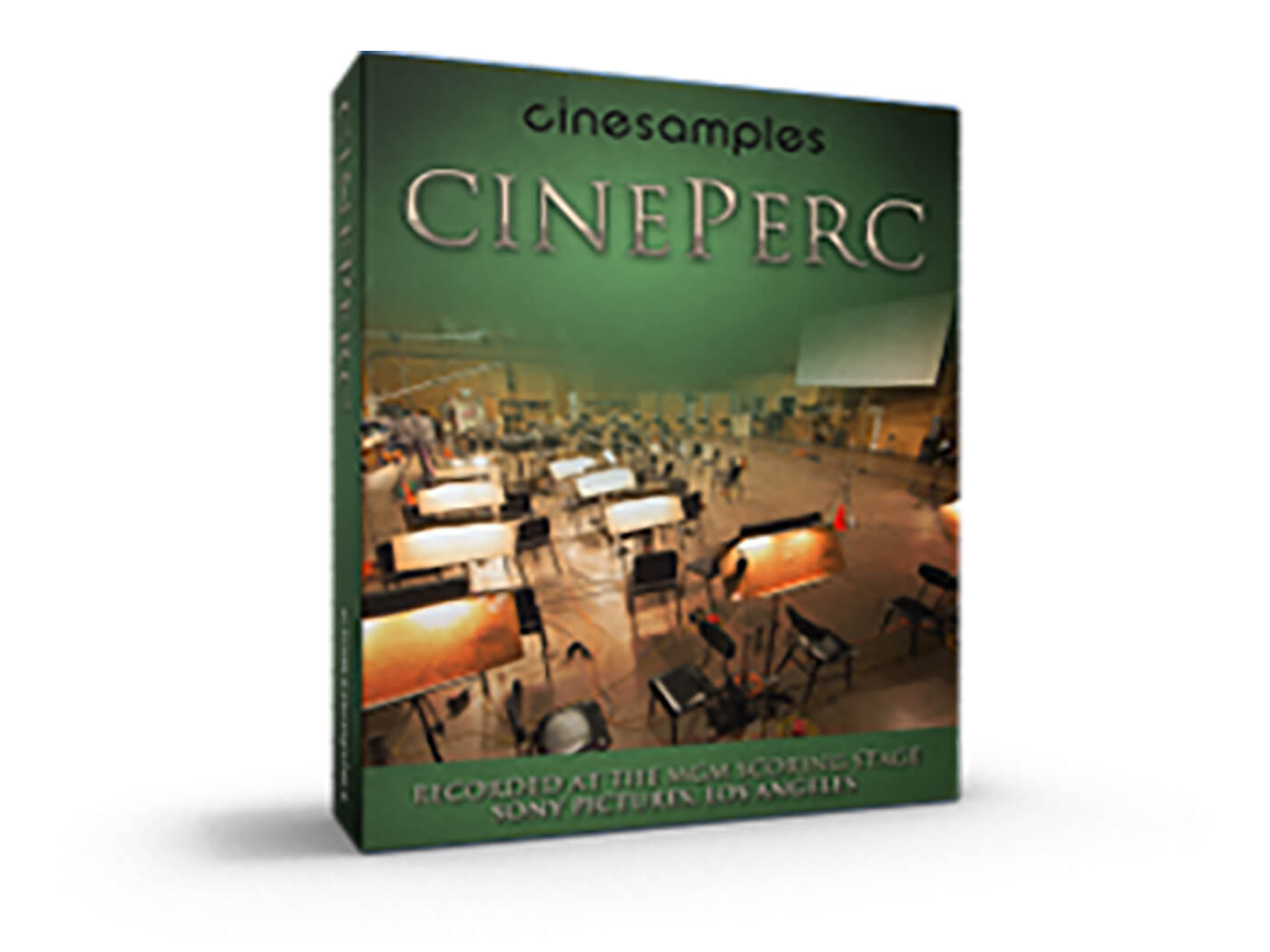 Another monstrously deep and rich source of sounds for percussion-lovers everywhere, Cineperc’s samples were recorded at the legendary MGM Scoring Stage at Sony Pictures Studios in LA.