FabFilter’s expansive filter plug-in gets a redesign across the board, from interface and functionality to the all important sonics. Will 3 be the magic number? 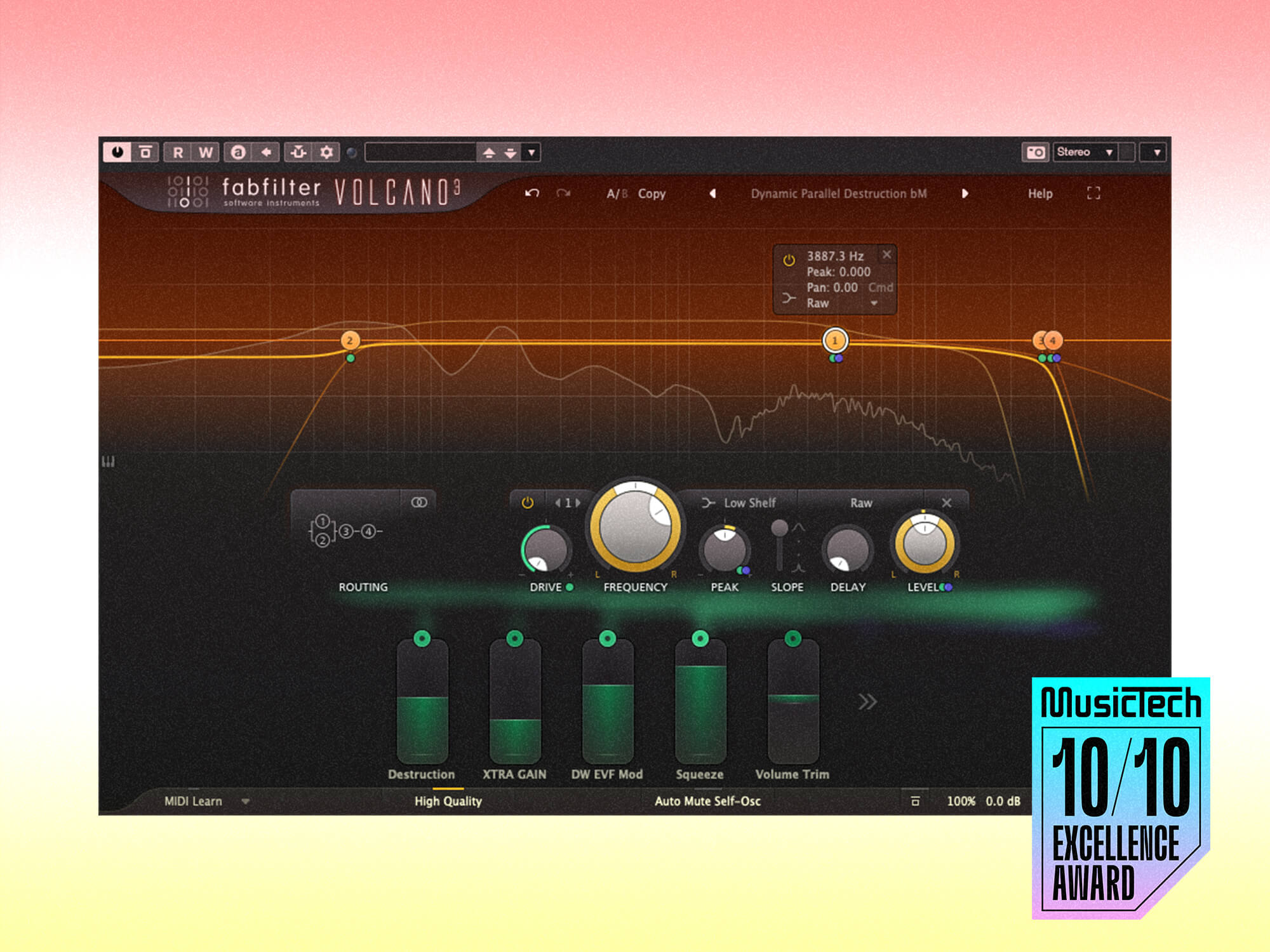 The Volcano 3 may look like a filter plug-in, and it is definitely a great one. In reality, it’s much more than that, being a highly customisable, practical and creative audio tool box based around a formidable set of EQ/filter bands.


FabFilter’s recent update of its Timeless delay was notably impressive, so expectations are high for this third iteration of its Volcano filter plug-in, which is already considered to be an established class act. The Volcano 3 may technically be a filter plug-in, but now more than ever it is taking the core of four independent filters and stretching and bending them into more complex and capable audio processing effects.

The refreshed UI design combines a real-time spectrum analyser display and filter shape overlays with editable nodes for four filters. Below this are the main filter controls followed by the user-configurable modulation section. The perimeter of the interface hosts the more mundane essentials such as preset management, undo/redo (a must for the inevitable “I swear I had it perfect just now” moments), output/mix, MIDI Learn, full screen mode and processing quality (oversampling). It’s an accessible and inviting space of movement and colour, but never overbearing or garish, which is lucky as it is one of those plug-ins you can spend a long time tweaking. Version 2 users will be familiar enough to get to work immediately, but those new to Volcano will not need to reach for the manual immediately – although it is needed for deeper dives.

The preset library is well-stocked with solid starting points, more developed processing approaches and a healthy dose of experimentations to showcase some of the creative potential on offer. The myriad ways in which the modulation section can manipulate the filter controls point to near limitless sonic options, from funky envelope filtering to mangled chaos. 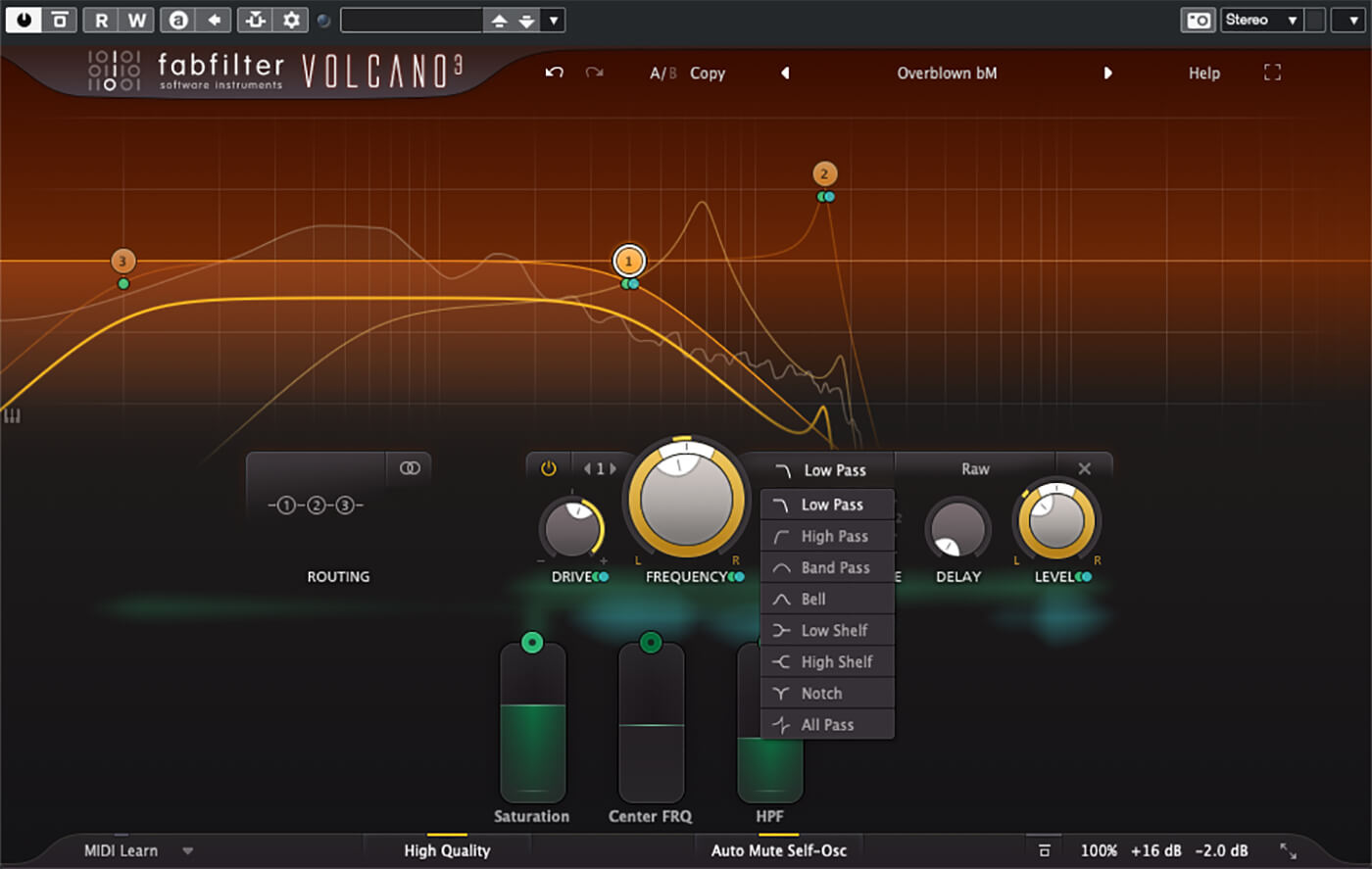 The updated Volcano 3 augments the traditional triumvirate of low, high and band pass filters with bell, low/high shelving, notch and all-pass shapes, which is a substantial upgrade. A 6dB/oct slope option has been added, which is welcome particularly for gentle shelving work. In expanding the Volcano, FabFilter has made inclusions such as this that enable subtlety as well as bolder, more outlandish manipulations. The eleven filter styles set the character of the non-linearities (saturation) and peak/resonance, with a wide range from clean and smooth to raw and extreme.

For more hot-tempered styles, engage the Auto Mute Self-Osc button to keep your ears from bleeding. The multiplier effect of these styles on the eight filter shapes presents the user with an exhaustive set of origin points, and it requires no great effort to conjure up deeply satisfying sounds and creative tools in spite of the potential for choice overload.

In its initial static form, it is simple to build up EQs and surgical filters with as much range as any dedicated product, but the real magic of Volcano is that each of the four filters can be moved in any way and in any direction, even time. The filter delay function provides up to 50ms delay which can be used for combing and Haas effects when altering on parallel filters and in wet/dry mixes. Modulating the filter delay(s) allows chorus and flanger effects to be developed, as well as rhythmic pitch slurs when hooked up to an envelope generator. Now add to this the fact that each filter can not only be panned, but that its centre frequency can be offset across the stereo field or between mid and side in m/s routings, and it is easy to see the floodgates open to all manner of stereo width and auto-pan effects. 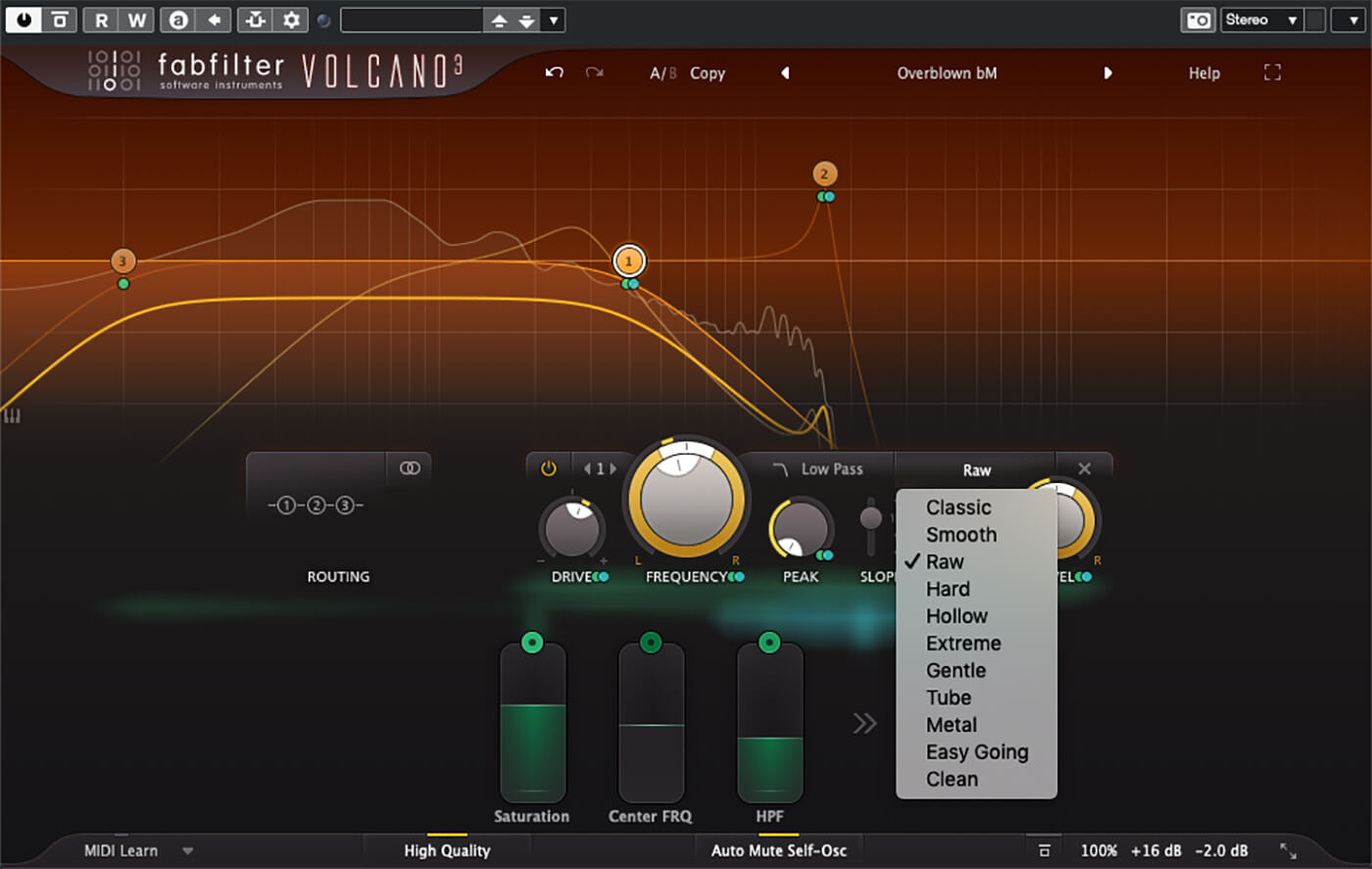 The base architecture of the Volcano 3 consists of eight possible arrangements of the four filters in either serial or parallel. For example, this can consist of two parallel filters (left and right, or mid and side) feeding two serial stereo/mid-side filters. This may seem like more complications on top of the 8x11x4 filter choice, but in practice it is very simple to set up and switch mid-flight, which can lead to some unexpected places. If those places aren’t to your liking, the Undo feature is there to bring you home. The creative scope this affords is obvious, and adds invaluable flexibility when putting the Volcano 3 to more technical use, such as a dynamic EQ trimming out low-mid mush and sub-bass rumble.

Though the filters sound superb, both singly and in combination, the alchemical might of the Volcano 3 lies in the motion that can be applied to the cutoff frequency, drive, pan offset, delay or Q. The module list is small yet perfectly formed: LFO (XLFO), envelope generator, envelope follower, MIDI source, XY controller and slider.

Once instantiated, their outputs can be connected to any filter parameter(s) via a simple drag and drop. Each connection can be tailored via the modulation slot panels that appear when parameters of modulators are clicked. The connections aren’t shown as wires, but rather as coloured glowing and pulsing fuzzy lines running between the modulation and filter control sections, which is about as much visual feedback as one may need. Racking up these fully customisable can be an effective tweaker’s paradise with endless configurations for hands-on and automated control, but it is also simple for those who want a quick solution.

What these modulators unlock is not only the potential for customised/combined control sets and the kind of envelope/LFO filter wobble we all love, but also as pathways for compressors and transient shapers, dynamic EQs, phasers and flangers (thanks to the new all-pass filter shape). Flexibility is a key asset for the Volcano 3, allowing it to sound damn close to a Mutron III or rustle up a touch of BiPhase, and still produce cutting stutter patterns and complex tempo-sync multi-notch sweeps. 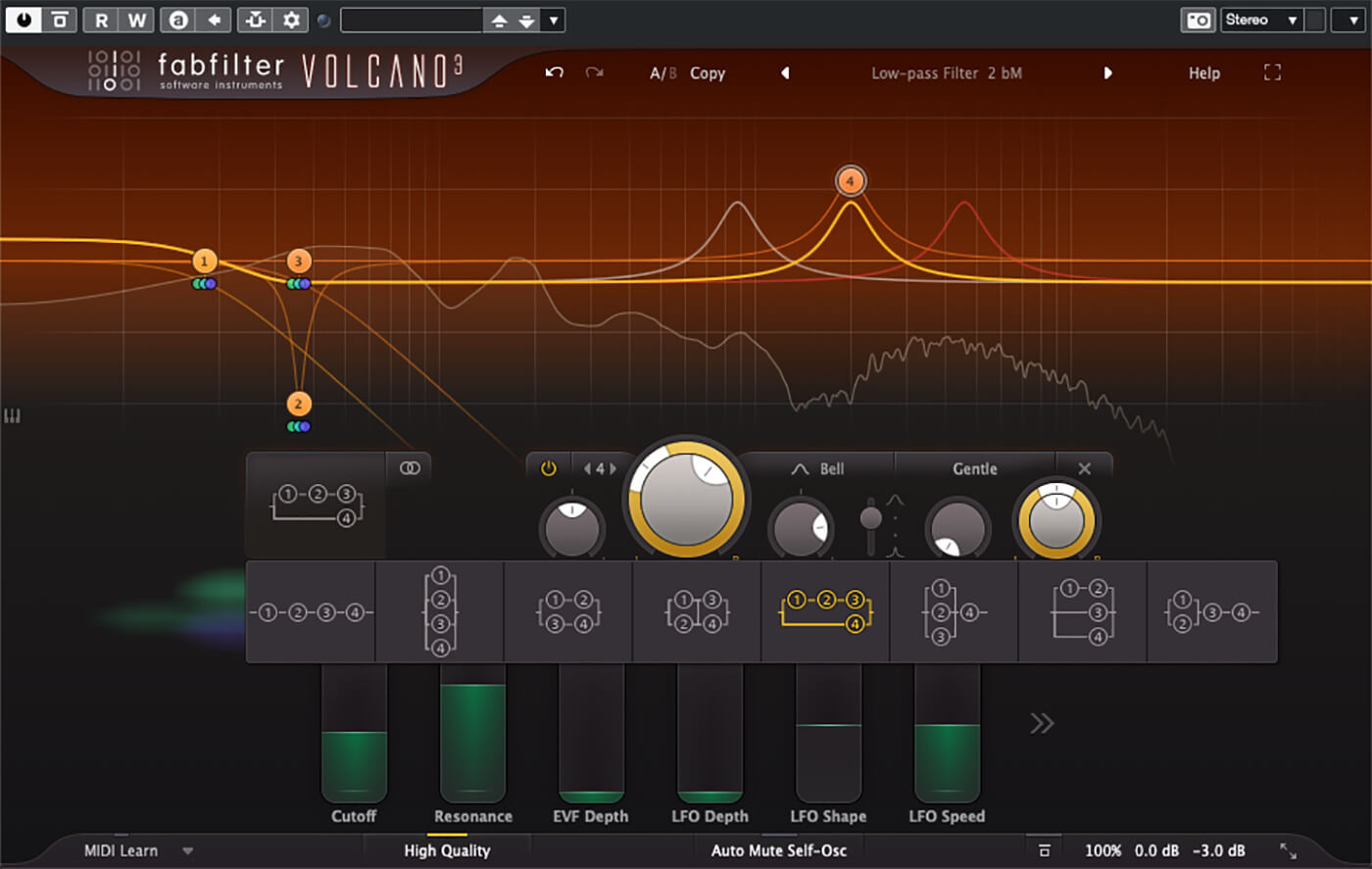 Digging into Volcano 3 is a pleasure, not just for the sonic results, but for the creative expansion that comes with being able to quickly and easily assemble effects blocks that are usually locked tight behind the UI. There is plenty of opportunity to get lost in this plug-in, which the new full screen mode encourages, and it’s equally easy to set up a great-sounding filter effect with plenty of room for sculpting further down the (mix) road.