FabFilter has received some incredible scores for its desktop plug-ins and now it looks set to conquer the mobile world with seven magnificent iOS stars. 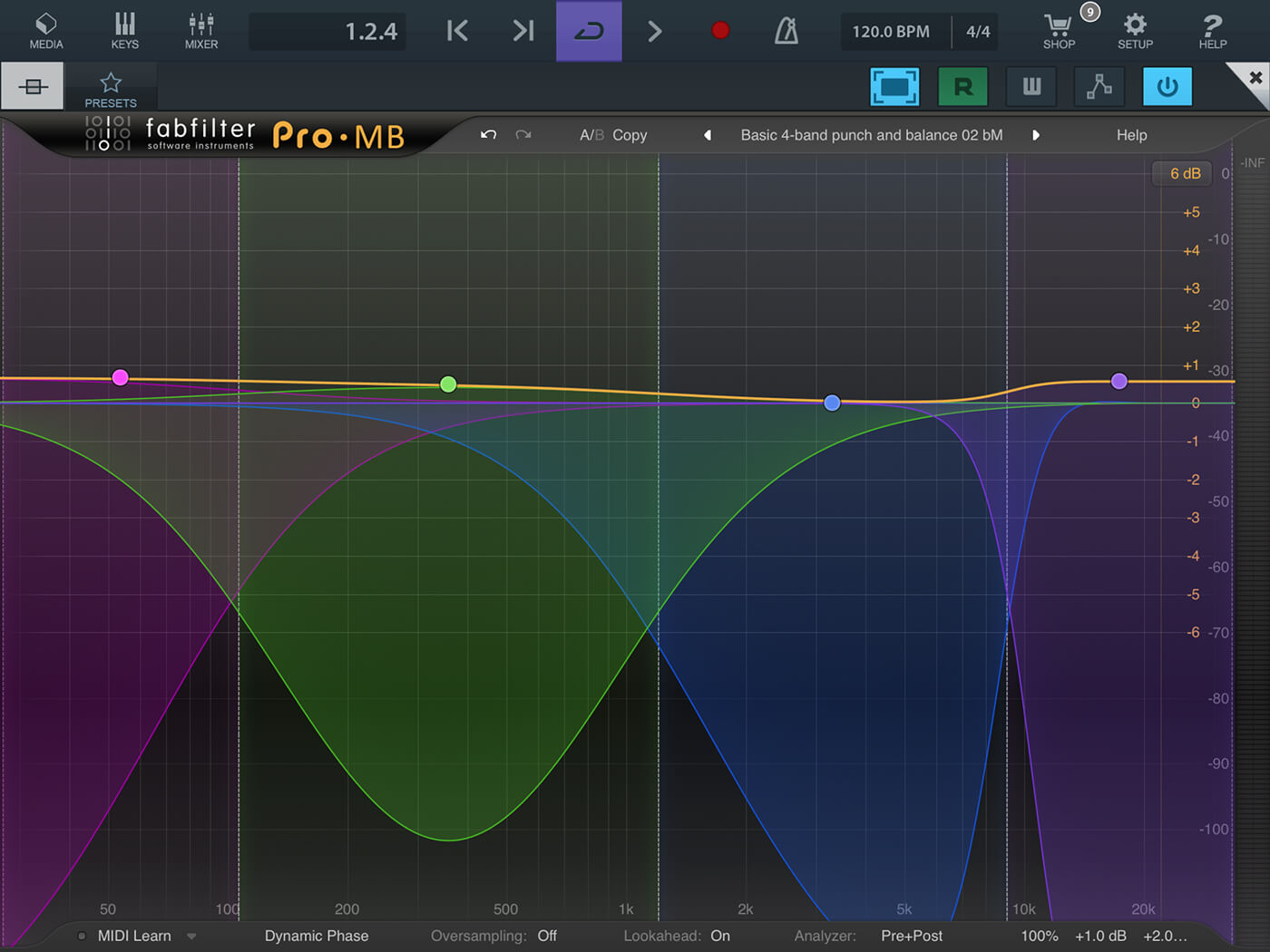 Since iOS had standards like Inter App Audio (IAA), Audiobus and Audio Units developed for it, the mobile platform has become a great one for creating complete studio setups on. All three of these standards allow you to mix and match apps on your iPad or iPhone so that they can talk and work with one another. Just like a desktop DAW, for example, Cubasis on the iPad can run plug-ins which are installed separately.

Want to run some instruments and effects developed by third parties in your iOS DAW? No problem. Audio Units in particular – now at version 3 as AUv3 – seems to be the one that has solidified iOS as a proper music-making format, and more companies are developing apps and plug-ins for it.

FabFilter is one such company, a developer of some of the best desktop plug-ins around. Its Pro-L 2 limiter achieved the highest MusicTech accolade with a 10/10 Excellence Award last year (we called it “an incredible achievement”). The Pro-C 2 compressor scored the same again (“a future classic”), as did the Pro-Q 2 EQ (“absolutely brilliant”) and the Pro MB Dynamic plug-in made it an unprecedented fourth 10/10 for the company. It’s fair to say then that a) we like them and b) they’re pretty good!

Now FabFilter has released a complete set of these plug-ins in the AUv3 format, so does that quality transfer over to the iOS domain? Let’s find out.

I’ve got seven of the new plug-ins up and running on my iPad. They are iPad-only I’m afraid, and you’ll need – as I quickly discover – a newer 64-bit model of Apple’s finest. Out of the window goes my old fourth generation machine and a much newer 7th gen model is drafted in for the test. I’m also using the plug-ins with Steinberg’s Cubasis (now at v2.8) although as AUv3 plug-ins, they will also run with other DAWs like Auria, GarageBand, and n-Track Pro.

Cubasis has matured well into an iOS DAW and it’s easy to get the plug-ins up and running after downloading them. Simply select either an audio or MIDI track, add an effect in the channel (as an insert effect) and you’ll get a set of effect type categories as a drop down menu, including IAA, Cubasis’s internal effects and Audio Units. Fabfilter’s suite will appear under the latter; click launch and you are away.

Each one looks stunning, I have to say. They take up most of the bottom half of the iPad screen – but are expandable to fill the screen should you wish – and vary in looks from those with ‘classic’ FabFilter dials to those with draggable pointers across the frequency range. 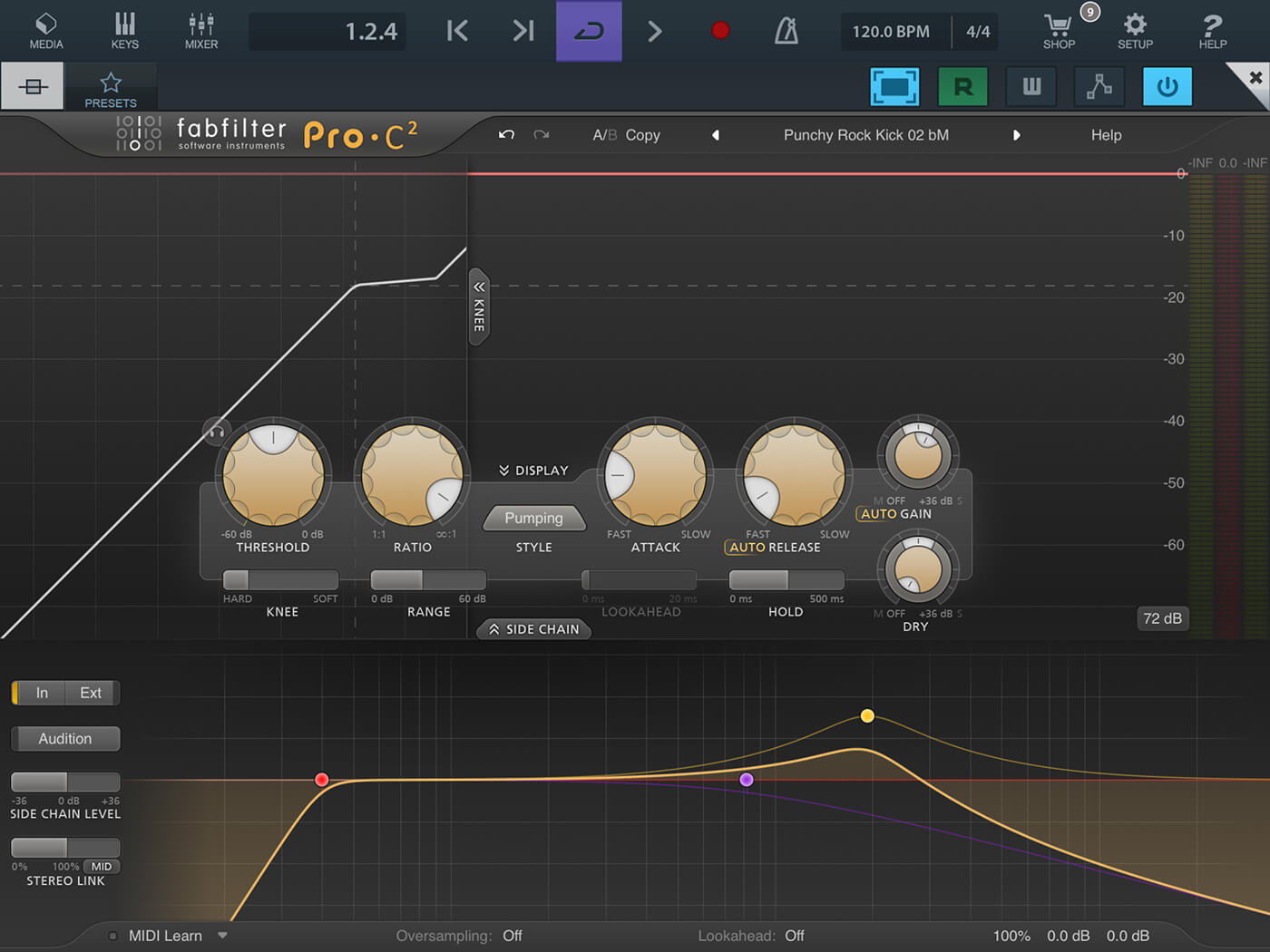 Starting with Pro-C 2, this compressor features larger dials for Threshold, Ratio, Attack and Decay, and smaller ones for Gain and Dry. What’s really great about it – and indeed many of FabFilter’s plug-ins – is that a meter reveals a moving waveform ‘behind’ the compressor (which becomes semi-transparent) and changes as you make changes to the controls, as do the shapes of the gain peaks representing the notes. You can therefore instantly see what you are doing to the signal as it flows from right to left.

Aside from the fact that you are controlling it by touch, Pro-C 2 appears to be close in operation and features to the desktop version, so you get eight different compression styles (Clean, Classic, Opto, Vocal, Mastering, Bus, Punch and Pumping) plus a sidechain section and EQ section, with HP and LP filters. Fortunately, it also sounds as good as the desktop version, with the eight compressor types, making it great for everything from precise and clean mastering compression to pumping dance effects. The Punch one adds just that, great impact for drums, bass or anything else you might need weight for; indeed there is a type for anything, plus presets a plenty for instruments, vocals, drums and more.

Pro DS is next up, a de-essing plug-in with less of a varied use than most of the other plug-ins here, but what it sets out to do it does very well. Featuring an ‘intelligent’ Single Vocal detection algorithm, it strips any stray sibilance out of your vocals with ease. Having said it only does one thing, you can also use it in Allround mode to limit frequencies on whatever source you like. It’s straightforward but effective, just what you want from such a workhorse plug-in.

Pro-G is a gate/expander plug-in that features similar features and controls as the compressor – and that lovely dynamic waveform – plus five algorithms: Classic, Clean, Vocal, Guitar and an ‘upward expansion’ style. Most surprising is how much impact what you might expect to be a simple plug-in can have on your music. Just step through some of the Drum presets to hear how well-programmed gate effects can add so much punch, power and pump to a sound.

Pro-L 2 is again almost identical to the desktop version with eight varying algorithms that deliver what can be very different limiting flavours. They prove to be excellent though, for everything from adding a little punch to drums to more transparent mastering applications. As with all of these plug-ins, the true effect is very apparent as you step through some of the presets, here set out in folders for Loud, Moderate and Safe applications.

Number five is Pro-MB that, along with Pro-C 2, is one of my favourites. It features almost multiband compression and expansion with so much flexibility it becomes a great dynamic effect. Here the controls move with you across the frequency range (and do, on occasion, get in the way if you are making sweeping movements) and you can end up doing everything from flexible EQing, dynamic compression to transient shaping, making it one of the most flexible of the seven.

Coming to Pro-Q 3 after the likes of MB, you might be disappointed that it just does EQ, but it does it so well – with such intuition, easy control and great presets – that this might be one to get first.

Finally, just room to cover Pro-R, probably the finest reverb you’ll find in iOS land and my favourite of all seven plug-ins here, simply because its range of sounds and beauty is so lovely to behold.

You won’t need all of these plug-ins – not at first anyway – as some double up in functionality, so you’ll want to pick and choose with care. Personally I’d choose the Pro-C 2, Pro-MB, Pro Q and Pro-R to start with, and move on to expanders later – your choice though. What you will find, whichever ones you choose, are plug-ins that offer probably the best and most professional experience on the iOS platform. For me, experiencing this kind of quality almost feels like iOS music production has finally come of age. I love making music with apps like Cubasis and Korg’s Gadget, but somehow FabFilter has just made music production on an iPad ‘proper’. Mobile music making has just grown up, and it’s fab. 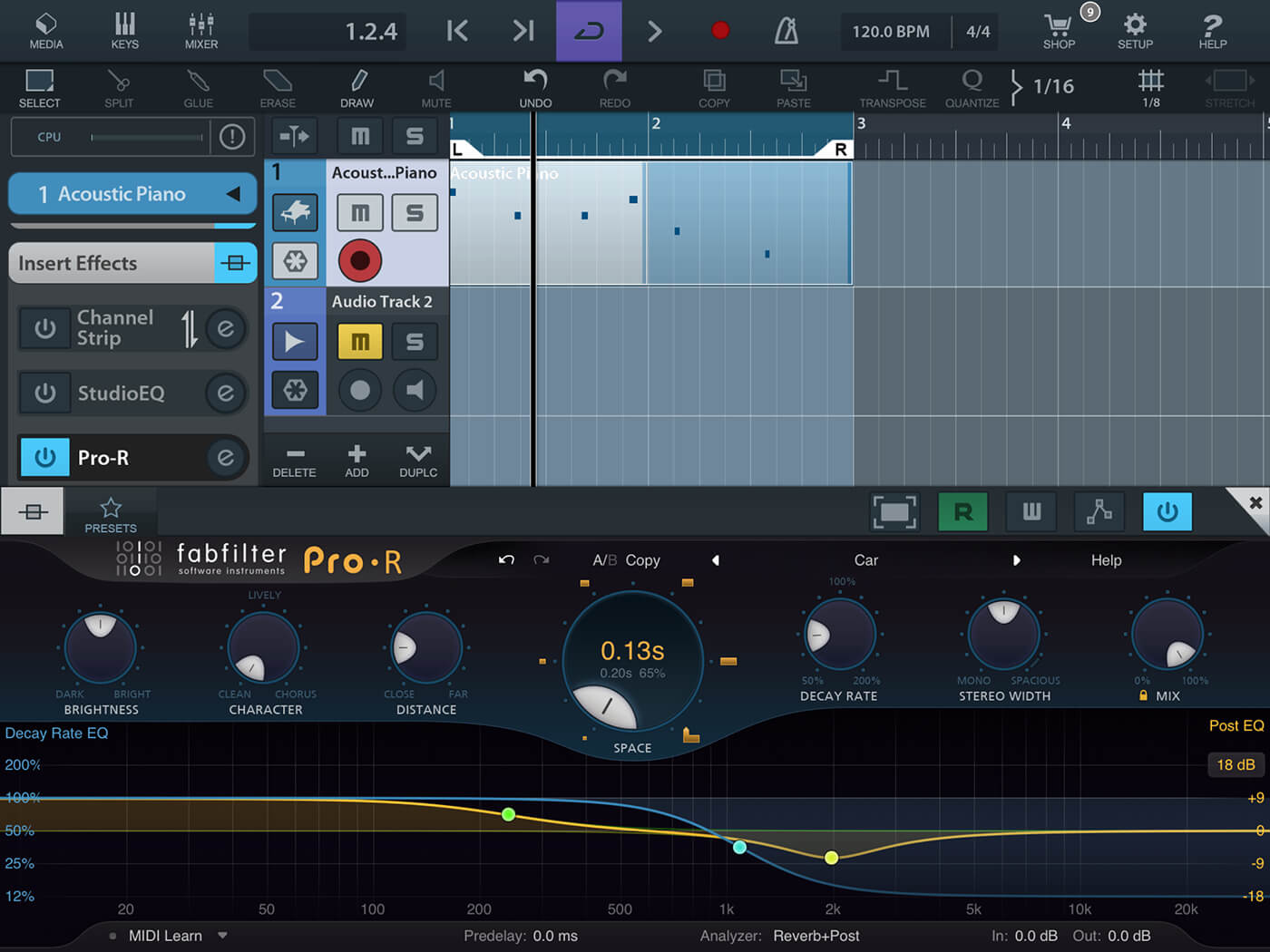 If you are a serious iOS producer then these are seriously good plug-ins. I say ’serious’ because while they might not be particularly expensive as desktop plug-ins, spending £28 to £38 per plug-in on iOS music making could be seen as expensive, especially when actual DAWs can cost around the same amount of money and deliver effects too.

However, these scream quality, are incredibly easy to use and beautiful not just in terms of looks, but also operation and sound. They will truly make your iPad music production experience more professional and feel more real, and they are a great way to mirror whatever desktop set-up you have to take to the outside world of mobile music making. So like I say, if you are preparing to be a serious iPad producer and have the cash, there’s little better out there. 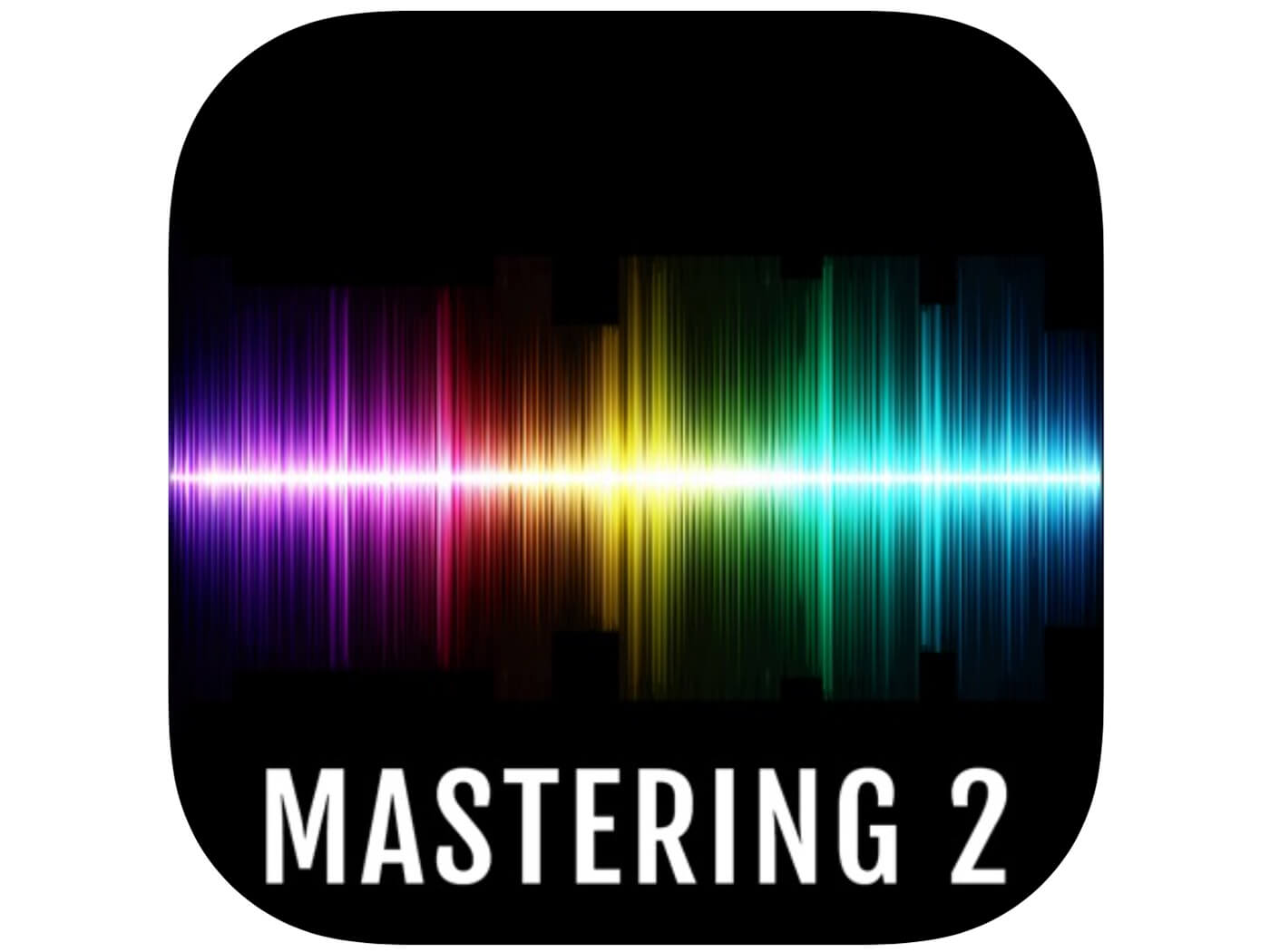 There aren’t a huge number of big names doing pro plug-ins for AUv3 but 4Pockets has a range of bundles tailored for specific tasks and the Mastering one contains a few plug-ins that are quite similar to FabFilter’s. 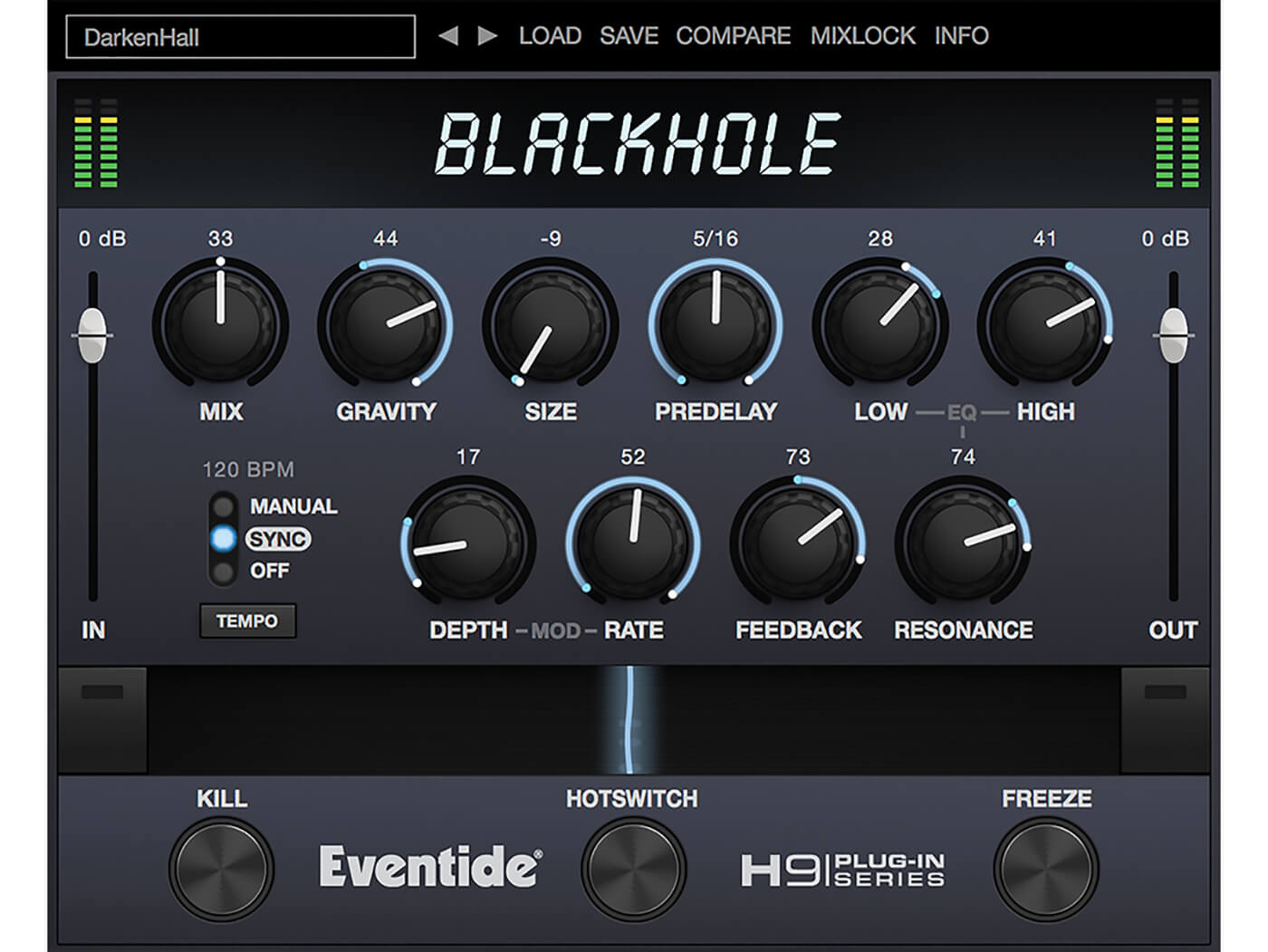 If you are after a great AUv3 iOS reverb then this beauty from Eventide does the effect by the bucketload. You can get everything from standard room to out-of-this world (literally) huge effects and it sounds incredible