Eventide SplitEQ review: an incredibly powerful and effective EQ that could be your new favourite 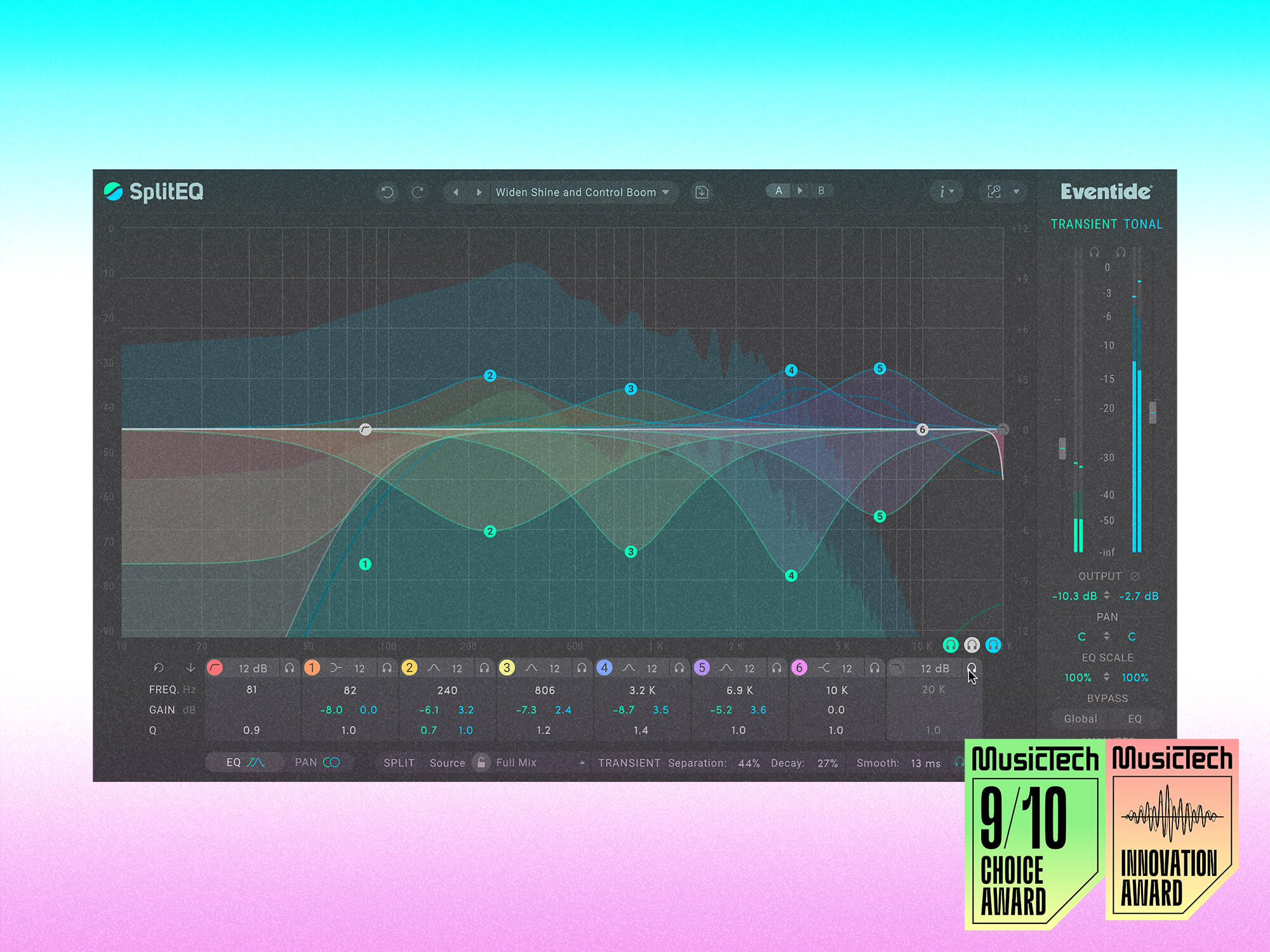 
Eventide turned heads when it released Physion in 2017. The plug-in effect uses the brand’s Structural Split technology to split the transient and tonal portions of the audio into different streams, then allows you to process them differently. Although it’s a fantastic creative tool, it’s not necessarily one that you can use in everyday mixing tasks.

SplitEQ is based on the same principle but implements the tech into a familiar EQ environment. It’s an incredibly flexible and useful tool for manipulating your audio in new ways, with a slick and easy to use interface. But can it carve its permanent place in your workflow?

Upon clicking one of the numbered nodes in the main window, you can drag it up or down, with a modifier key to adjust the Q. So far, so familiar. The magic here is that when you hover over a node, SplitEQ presents you with a blue Tonal tab and a green Transient tab. If you select and move the Transient tab, you’re only applying that EQ node to the transient part of the signal. Meanwhile, the Tonal tab will let you shape the tail of the signal. So, on the same node, you could boost Transient and reduce Tonal content. It’s a cleverly-designed system that takes the complexity of adjusting two EQs simultaneously and presents it in an intuitive and easy-to-use manner.

A tweakable spectrum analyser shows the signal for each stream, overlaid in slightly different shades of green, and along the bottom, you get numerical readouts for each band. The green for Transient and blue for Tonal colour scheme is carried across the whole plug-in, and the dual controls allow you to edit each independently or both at the same time. This means you could offset the Transient and Tonal settings and then change them together whilst keeping the difference.

Elsewhere, there’s volume and pan control for both audio streams, an EQ scale function, and Global or EQ bypass. There’s also an excellent Solo function that lets you listen to either stream globally or the Transient or Tonal stream in a single band, which seriously helps when honing in on something specific, such as a problematic resonance. 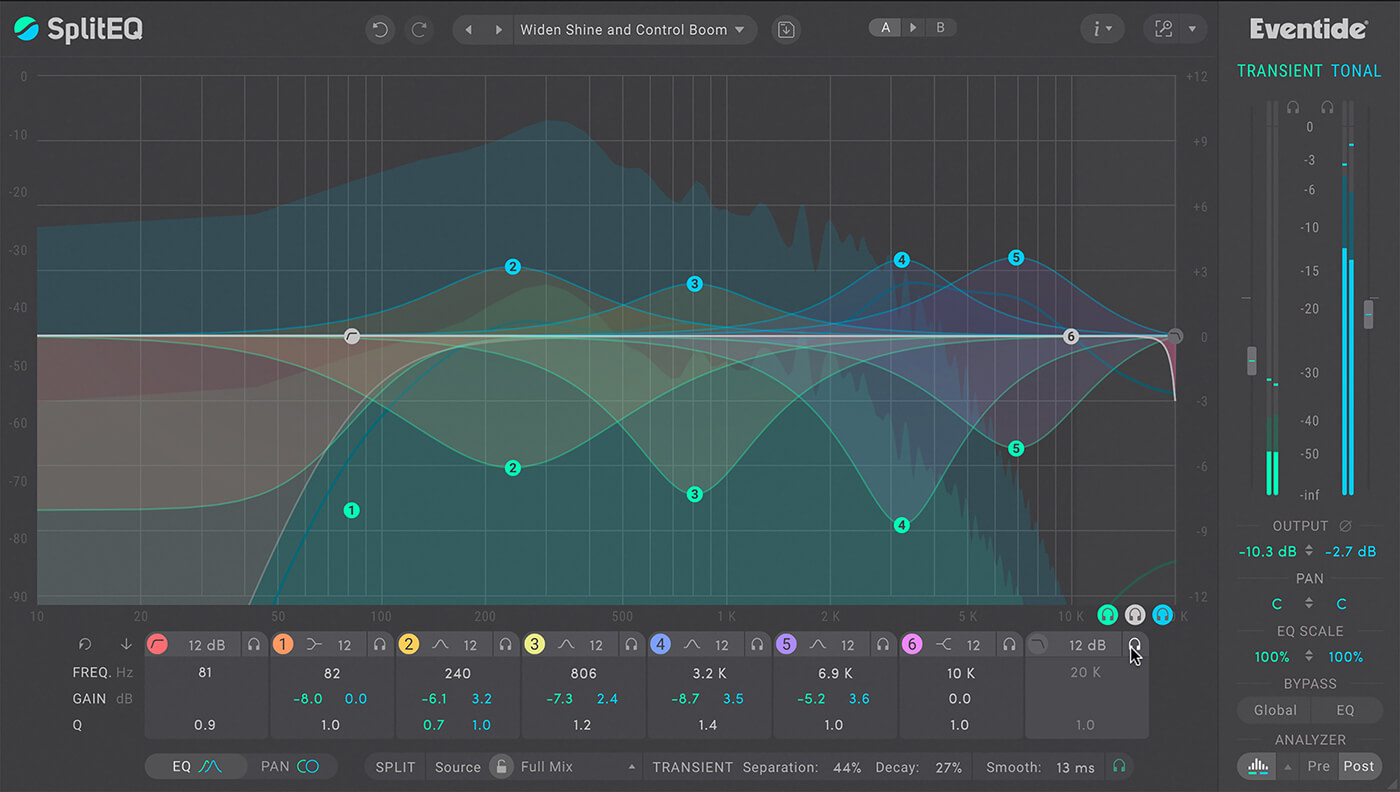 A vital control panel tucked away at the very bottom allows you to fine-tune the split detection algorithm. You can choose from 14 Source options including Full Mix, Kick, Guitar, Vocals, Piano/Synth, Bass and more. These will make minor adjustments to get the best results with the desired instruments.
There’s also a Decay control that affects the release time of the transient regions, a Separation control that helps precisely isolate regions across the spectrum, and a Smooth control to help smooth over the transition between the two streams. The solo function certainly helps when adjusting these settings.

We found ourselves using fairly extreme settings to get the transient stream sounding tight. The sound of the algorithm when it rejoins the streams is fairly transparent, but the separation is relatively gentle. For this reason, it’s best to use a different tool if you’re looking to do sharp transient work.

We also found that soloing one stream or the other occasionally created a bit of phasing. That said, SplitEQ isn’t a direct competitor to traditional transient tools, as it’s more of a precise, sound massager than a blunt transient chopper.

In practice, we achieved amazing results notching out tonal resonances in drums and other instruments without affecting the overall punch of the sound. SplitEQ allows you to alter the relationship between the sub of a kick and bass in a full mix, making one or the other a little more dominant, or lift the tops by boosting the transients with a high shelf. You can also boost guitar harmonics whilst turning down string buzz or add top-end shine to vocals without boosting the sibilance. The plug-in opens up some highly useful options for fixing problems and shaping a mix that aren’t available in many other ways.

Aside from altering the EQ, you can also modify the stereo image for the Transient and Tonal signals separately. You simply switch from EQ to Pan mode with a button at the bottom that changes the band editing boxes to display two panning sliders. This lets you pan not just different parts of the spectrum, but also the two streams separately.

We got some highly effective results carving out the centre of a drum track by keeping the transients closer to the middle, but alternately panning the tonal tails further out to opposite sides. This worked especially well on hats and percussion to give an illusion of cohesion whilst creating more space for vocals and other important central instruments.

Each band can also be switched to Mid/Side mode so you can play with the width. Again, this provides some fantastic opportunities to reach the innards of a mix or instrument and control its placement in ways that aren’t possible with any other plug-in. That said, the nature of the Mid/Side control means that the volume tends to change a fair bit when widening or narrowing, so you may have to compensate if you want transparency.

Given how powerful these stereo controls are, it’s a missed opportunity not to have incorporated them into the main EQ window to make editing quicker. It would also b useful if there were numeric values for the panning and M/S sliders.

All in all, SplitEQ is an exciting progression of Eventide’s Structural Split technology. It may not be as creative as Physion, but it’s arguably a lot more useful, and the preset folders called Enhance, Repair, Rebalance and Widen hint at its versatility. We can see this becoming an important utility for general mixing of individual tracks and fixing difficult problems, even at the mastering stage.