denise audio Poltergate review: Bring your drums back to life from the beyond

Smarter than the average noise gate, Poltergate adds transient shaping and de-bleed to the equation. 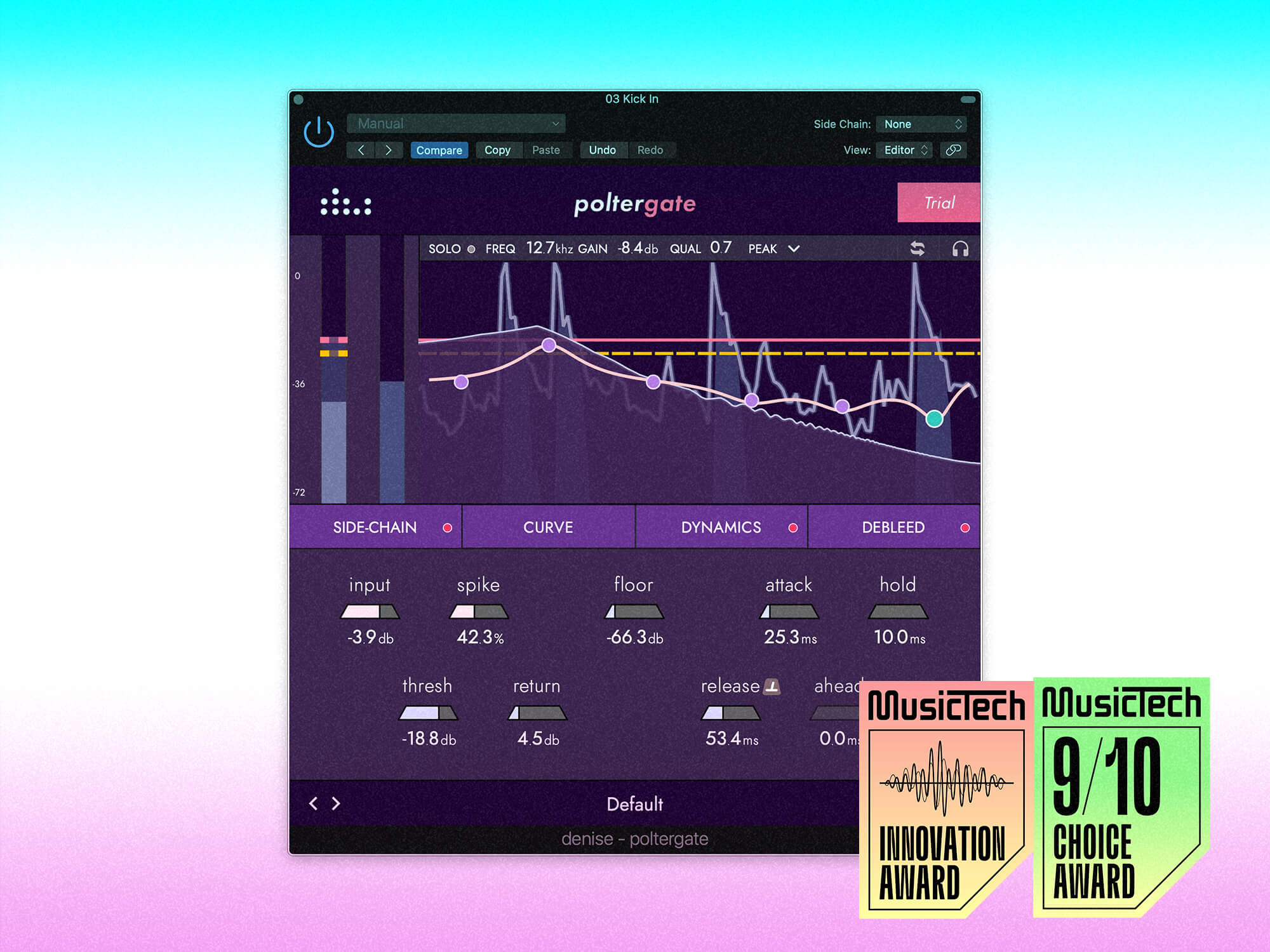 Noise gate settings for the kick drum. Graphics show the threshold/return lines, EQ shaping of the internal sidechain and the reinforcement of percussive transients within the same ‘sensing’ signal using the spike slider.


Having already impressed many with its earlier reverb plug-ins (see our Perfect Room review), denise audio continues its journey into dynamics processing with its new plug-in, Poltergate.

It follows nicely from the impressive Dragon Fire compressor we looked at earlier in 2021. This gate is aimed at mix engineers dealing with tricky mic interrelationships – drums in particular – but also for producers and composers to form rhythmic gating patterns that add interest and originality to loops and other stock sounds. In this review, we’ll concentrate on the former application, since processing drums is perhaps the greatest challenge any noise gate could face.

Instead of emulating the look of classic hardware using so-called skeuomorphic design principles, the good folk at denise audio prefer to develop user interfaces that do their own thing. In the case of Poltergate, many of the controls wouldn’t be featured on a traditional noise gate, going well beyond the scope of those gates and offering a simpler approach to setting parameters.

A clear graphical representation of how the sound is being processed – and the resultant changes in dynamics – is a welcome inclusion on the user interface. The functions that place this plug-in ahead of competitors include an intuitive control of the internal sidechain signal, a comprehensive transient shaping section post gating, and de-bleed filter algorithms to reduce spill.

The plug-in panel opens with the fundamental gating controls needed to isolate a sound, before going on to process and shape it further. We like that this introduces users to the correct order/chain of processing, i.e. making the sound more chopped before introducing transient shaping to restore life to the track once noise is removed. This would be very tricky to achieve using stock DAW processing; with Poltergate, everything is done within one plug-in.

Some controls are named a little differently from other gates, but largely their functions are clear. In case of doubt, there are some useful videos on denise audio’s website to demonstrate what everything does.

In line with the creative, compositional aspect of the plug-in, there’s a handy tempo/note value sync option attached to the gate’s release control. Monitoring and equalising the internal sidechain allows the gate to be more sensitive to certain frequencies over others, plus there’s a handy spike slider that amplifies transients so that the gate doesn’t miss out important parts of the performance when opening and closing. The equaliser here has multiple bands, a section of EQ/filter types, and is fully parametric.

A real-time graph tracks the signal over time to show the effect of gain reduction cutting in below the threshold. These types of representations are so handy in providing an educational tool to represent what’s going on at all times. This is a big improvement on the more usual and limited open-and-close LEDs.

The dynamics tab opens up a number of transient shaping options, with ‘punch’ relating to the strength of transients plus three further controls that emphasise the gated signal’s sustain. This is crucial for bringing life back to sounds that have ended up choppy as a result of noise gating and it’s more comprehensive than many of the dedicated transient shapers on the market.

At the right-hand side of the panel, there’s an option to apply clipping to the output signal, therefore reducing the dynamic range and helping to even-out dynamics. The final, de-bleed tab is used to help remove any remaining unwanted spill on the gated and shaped signal and has both high- and low-pass filters. Applications for this would include using the low-pass to minimise any remaining snare/hat spill on a kick drum track, and in contrast, taking out unwanted kick spill from a snare track using the high-pass.

When put to the test on a kick drum track, the plug-in did most of the processing work for us before needing to reach for a compressor or even an EQ. The internal sidechain was set to have sharper transients and its EQ contoured to concentrate on sensing the kick’s low frequency fundamental notes. Simply setting the threshold and return (hysteresis) levels got us most of the way there.

Transient shaping was the icing on the cake. Using a combination of ‘punch’ and ‘attack’ helped the kick cut through the mix consistently, whilst sustain was emphasised with the fat and duration controls, evening-out dynamics.

With an increased length of each kick, it seemed far less likely it would become masked by longer duration sounds in the mix, which is great. Indeed, to do this in a DAW, we would have needed to combine a stock gate plug-in and a separate (potentially expensive) transient shaper plug-in. Finally, given the tight initial noise gate settings, the de-bleed section proved useful for removing the remaining ghostly traces of hi-hat and snare spill.

With our top-of-snare track, the flexibility of Poltergate came into its own given the light playing of the snare versus the prominent spill of the hi-hats. With masses of bleed, we wanted to avoid making the unwanted sounds even more prominent when adding EQ and compression to mix the track, given that there were also plenty of hats in overheads. We managed to isolate the close-mic snare very tightly, which sounded a little choppy soloed, but opened up with reverb added in context of the whole mix.

Once again, we were able to increase sustain post-gating with the transient shaper, but we did find that the de-bleed filters we introduced after this tended to sound a little resonant with longer durations. De-bleed is a handy addition, but clearly not a magic wand. It needs to be used carefully in context of the processing that has already taken place.

All in all, Poltergate is a highly versatile, creative and capable dynamics toolkit that combines a multitude of useful sound-shaping features with useful graphics. However, several aspects of the user interface do take a little getting used to. For example, it took us a good while to realise that toggling off the tabs at the foot of the graph was the way to return to the main gate settings, causing us some initial frustration.

Its parameters are named a little differently from what we come to expect, but that just highlights how much deeper Poltergate goes than the average gate. User interface annoyances pale into relative insignificance when you experience everything the plug-in offers at its incredibly reasonable price point. Check out the free trial and keep an eye out for special offers.