This ‘tonal compressor’ plug-in might be complex, but it could also be the last compressor you ever need. 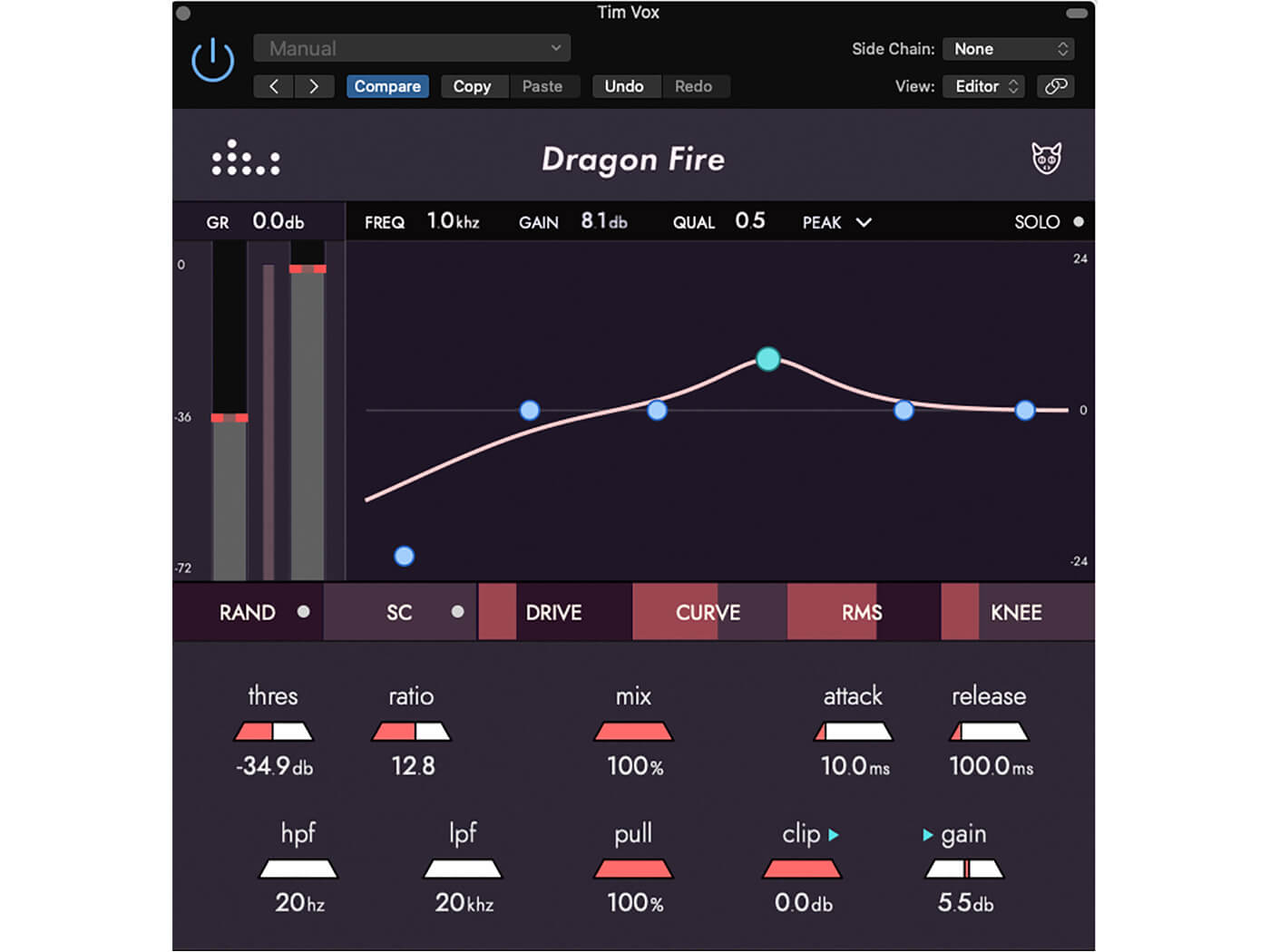 Takes a little while to learn

The Dragon Fire is a tone-shaping compressor that once setup makes everything sound better. This plug-in could become a core part of your signal chain.

Plug-in manufacturer denise has been consistently releasing excellent plug-ins for the last few years. Their ambience effects, such as Perfect Room, are now regular features of our mixes. However, their latest plug-in is a dynamics processor designed to serve all your compression needs.

This lets you boost and cut frequencies to push the compressor in specific tonal bands. You can also allow the equalised input signal to pass to the output for more extreme tonal control or have the EQ’d sidechain signal trigger the compressor only. It also features a range of other functions to allow it to emulate most features found on many of your favourite compressors and blend between them to create your ideal sound.

Installation of this small plug-in was a breeze, and authorisation is via a code in your denise audio online account – no iLoks here.

The first source we tried Dragon Fire on was live drums, isolating the kick drum. The idea with the different frequency bands driving the compressor harder or softer, depending on what is fed in, works fantastically. The kick drum was reasonably well recorded, but Dragon Fire allowed us to compress the drum nicely and emphasise the most pleasing frequencies all within one plug-in. It was like having a compressor and a parametric EQ all in one window. 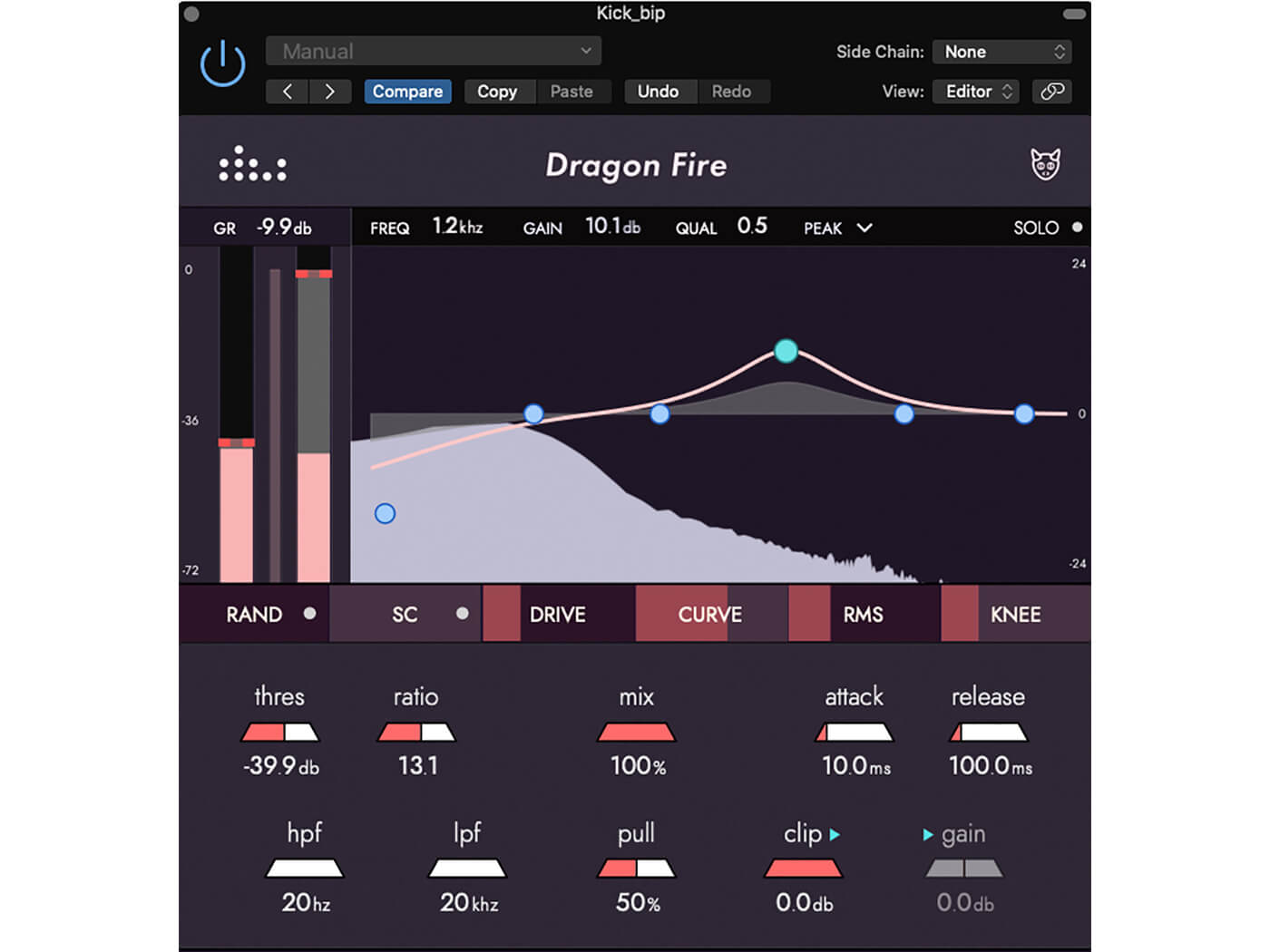 When capturing the kit, we had placed an SM7B above the kick drum to capture the sound of the whole kit. This mic position allowed us to hear the Dragon Fire on the entire kit without having to sub-mix and process the separate drums first – so this was a very useful test. Again, it worked well but was beginning to sound a bit too chopped at the end of each hit, so it was time to explore some of the deeper settings.

The compressor is designed to be very flexible, and there are different functions for adjusting the release curve and response of the compressor. By sliding the Curve control left, it’s has a very modern sounding, instantaneous release. To the right, the release is a little softer and slower and more reminiscent of an opto-style compressor. Most plug-ins have this sort of functionality as a switch or button, but because it’s a slider on the Dragon Fire, it means you can choose the perfect release curve for your audio.

The RMS slider works similarly. It moves between peak compression for really punchy compression to control sharp sounds that only need the loudest transients controlled, and RMS compression for smoother compression of less transient sources. Like the Curve control, a slider lets you find the perfect setting for your sound.

For vocals, as with the drums, we pushed the frequencies we wanted to compress most. Unlike the drums, this affected the EQ of the vocal sound too much, making it sound unnatural. This is the exact reason for the Pull function. When the user ‘pushes’ certain frequencies – because this affects the EQ of the sound – there’s a counter ‘pull’ function to remove those frequencies from the output. This results in those frequencies driving the compressor harder but not being artificially boosted in the finished sound. Using the Pull control, it was simple to get a pleasantly compressed sound triggered by the key frequencies without it becoming overly harsh. 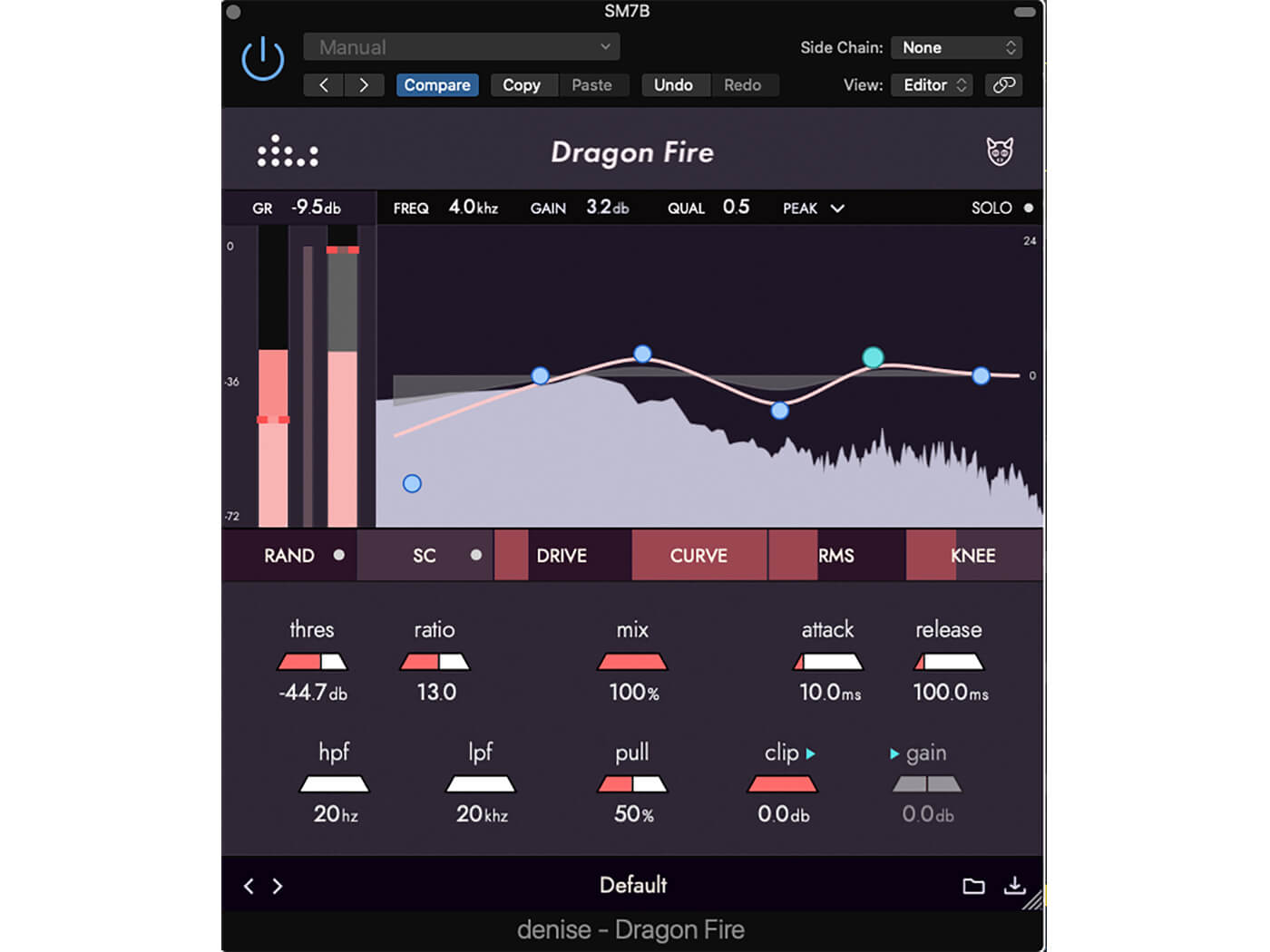 This compressor likes to be driven hard. Really hard. With gentle compression settings (threshold at -20dB and ratio at 4:1) and a reasonable input level, the compressor wasn’t really kicking into life. However, once we dropped the threshold and pushed the ratio, things started to happen, and the tone of the compressed sound sources started to come out.

There are additional tone-shaping functions within the plug-in that offer clipping and saturation. These emulate the sound of preamps in tube compressors, creating a slight warmth and distortion to the compressed sound. As with the compressor as a whole, this responds differently depending on the frequencies you push into it. When a frequency slider is pushed up, that frequency band gets more saturated. This feature works best when combined with the Curve and RMS sliders to emulate the sound of an older compressor.

This is a fabulous compressor, and it is likely to become our go-to plug-in when audio needs a real push. Compressing different frequency bands isn’t new, but the ability to combine this functionality with the Pull control to stop it unnaturally affecting the output audio EQ is new to us.

The ability to control so many characteristics with sliders rather than buttons means you can tailor Dragon Fire to be the perfect compressor for any situation. By combining the controls appropriately, we’re sure there isn’t much this compressor can’t do. However, because there are so many functions, controls and options, it does take a little while to get used to it. Once learned, though, Dragon Fire makes complete sense.

Like its namesake – the Dragon Fire is a giant beast. But once tamed, it will turn everything it touches into fire.