This original creation from Cherry Audio boasts over 700 sounds from over four decades, plus some seriously deep sound shaping tools. 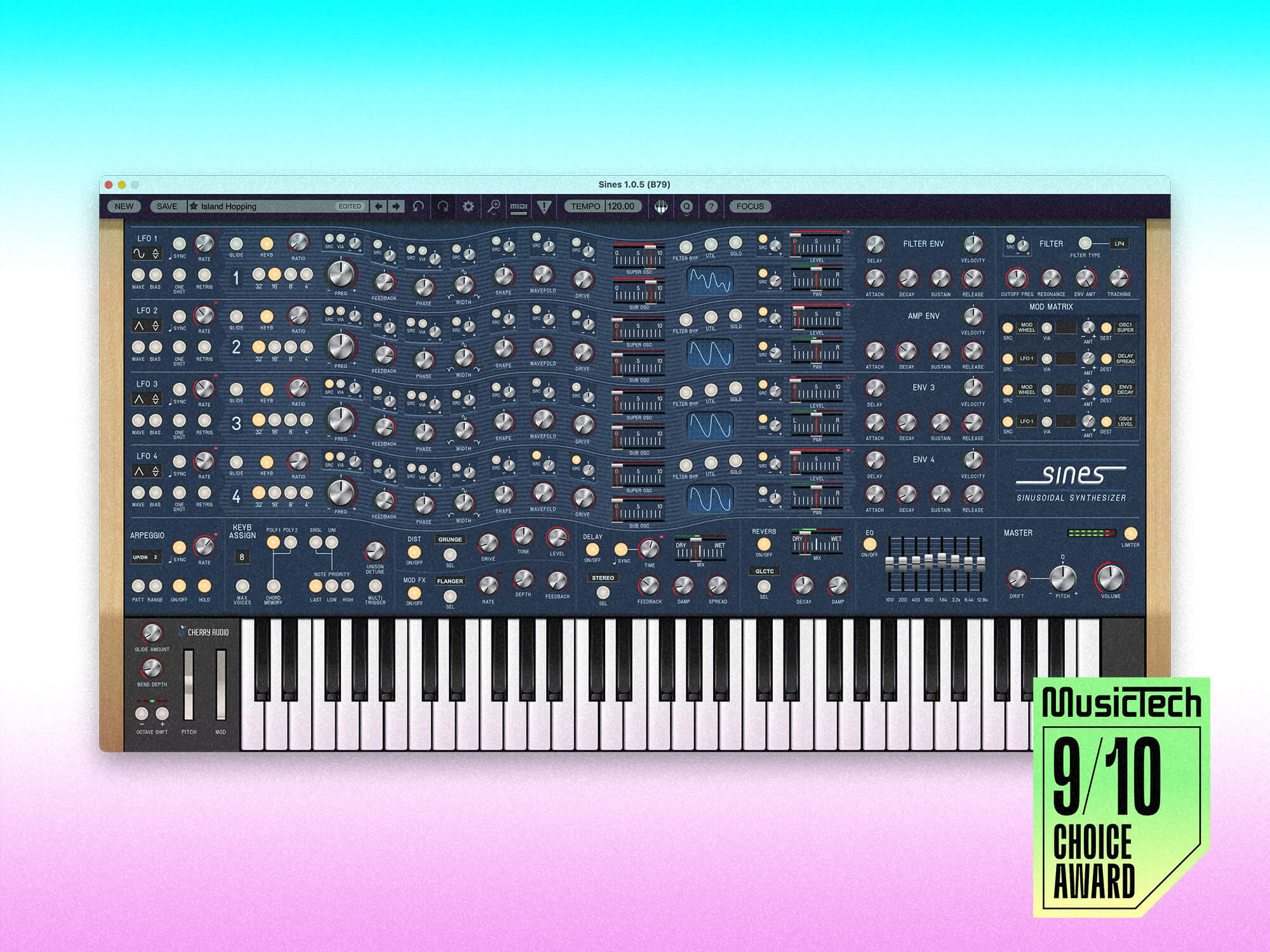 Cherry Audio is perhaps best known for its software recreations of classic and esoteric synthesizers, but it also isn’t afraid to take on a completely new challenge by designing an instrument from the ground up. Joining Cherry’s other original, Dreamsynth, is Sines. With something of a 1980s-leaning vibe, it should fit right into the toolkits of musicians and producers looking to capture the sound of that decade, but dig a little deeper and you’ll find there’s a much wider sonic range on offer.

The American developer is sticking with its tried-and-tested core design for Sines’ wrapper, so it comes in standalone and plugin formats. The toolbar provides swift access to all the setup and audio and MIDI I/O preferences, including the ability to activate MPE MIDI for more expressive control and manage any assignments, which can be made by right clicking on more or less any parameter. The Focus feature that zooms in on the interface and allows you to scroll around, which is especially useful here due to Sines’ large number of controls, some of which are fairly small.

Sines’ interface looks a little daunting and, indeed, it’s not quite as immediately approachable as the brand would like you to believe. But, to Cherry’s credit, there are excellent tutorials on its website, which familiarise you with the basics. With these, you should have the core structure figured out fairly quickly.

There are four oscillator sections each with an identical – and comprehensive – set of controls. These use sine waves but employ various waveshaping methods to bend and twist them into a other shapes such as square, sawtooth, triangle and ramp. By working with the rate, tune, octave, width and shape parameters for each one, you can rapidly create harmonically rich tones even from a basic patch. Without doing much research on the controls, it’s easy to create some Prodigy-esque leads and arpeggios using differently-tuned oscillators and some drive.

Though you can mix and match your approaches, Sines’ multi-oscillator approach lends itself to three main types of sound generation. The first is subtractive synthesis, where sine waves are shaped into other waves before being filtered. The second is additive synthesis, where you stack sine waves at different amplitudes and pitches. Thirdly, oscillators can be made to modulate each other, resulting in an FM-style carrier and modulation system. Add to this the fact that each oscillator has a configurable sub and super-oscillator that can extend the signal at the top and bottom, and things start to sound huge very quickly.

Each oscillator has a copy and paste function which is insanely useful for effortlessly moving settings between them, as well as a randomiser for instant selection of a bunch of new settings. A handy solo button can be found on each oscillator which makes it much easier to hear what’s going on as you make changes, muting the other three.

Sines has up to 16 voices of polyphony but manages to be kind to your CPU, thanks to some efficient coding. It didn’t seem to tax our test machine much, even when playing complex patches. There’s a chord memory function, single voice mode and unison mode with detune so you can make it behave as you when playing keys. Each oscillator also has independent glide and pitch controls that let you mix and match not only harmonies but sweeps and portamento within a patch.

The controls just keep on coming, and the resonant multimode filter with 6, 12, 18 or 24 dB/oct low-pass, high-pass, band-pass and notch modes can sound fat and rich or thin and spiky. A complement of four LFOs with 14 waveforms can be assigned practically anywhere, including the four envelope generator sections. Meanwhile, a four-slot mod matrix allows modulation of nearly every parameter in the synth.

As ever with synths, you can add movement and dynamism to your sounds by modulating envelopes and filters but also the core controls of each oscillator. Many of Sines’ presets have this dialled in already, though you’re free to tweak it yourself. An arpeggiator with up to four octaves’ range is also available and really helps to liven up even the simplest patch.

Sines comes with over 700 presets, all categorised in its easy-to-navigate browser. There’s simple plucks and basses, ghostly pads, percussion hits, pulsating sequences and evolving textures, among many more sounds. While some do sound a little basic, dig deeper and you will find shining gems, resplendent with warmth and energy. That’s thanks not only to the stacking, tuning and modulating we’ve mentioned but also the built-in effects section that features multimode distortion and chorus, delay and reverb each with their own parameters to tweak.

There’s also an eight-band EQ and, at the master stage, a variable Drift knob can infuse the entire signal with that woozy, analogue-style imperfection that can make a patch sound so much more human and less machine-like.

Sines has a palette of retro-style presets, without explicitly being a recreation of any synth from any decade. But it also has plenty of sounds that sit nicely in any modern genre and style. A lot of the arps and sequences, for example, are ripe for modern EDM. That becomes true of even more sounds once you start to modify them, harmonising and detuning oscillators, adding crunch and effects and filtering the results.

The detuning and drift can also help you achieve a more ‘woozy’ feel that decouples sounds from any particular era and works especially well for soundtracks.

Like most of Cherry Audio’s other instruments, the price of access here is a mindboggling $39. For that low price, you get a whole lot of synth that sounds beautiful and is almost infinitely flexible. It’s a pretty easy choice to make.