Cherry Audio GX80 review: Two legendary synths for the price of one

Cherry Audio has created a true hybrid beast, combining two of the most sought-after synths in existence. The results are out of this world. 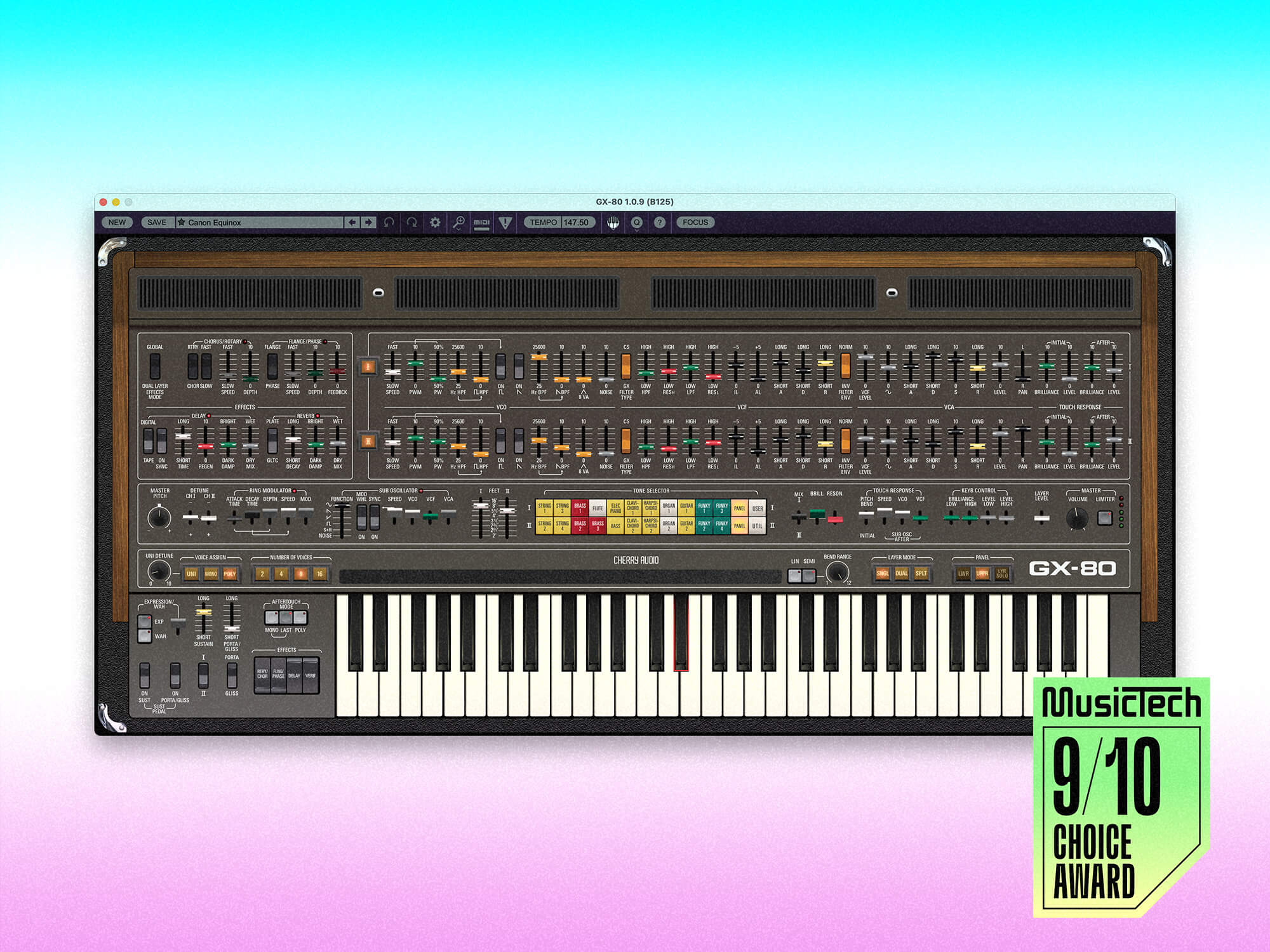 ⊖ There is a learning curve for less experienced users

Cherry Audio continues its relentless schedule of releases with what it says is the company’s most-requested recreation, the Yamaha CS-80. Actually it’s much more than that, the software format enabling the addition of a wealth of features not available on the original. In truth it’s based not only on the legendary CS-80 but also the vanishingly rare GX-1, a forerunner of the CS-80 of which only around 20 were ever produced and which cost a vast sum. The CS-80 was relatively speaking more affordable with a smaller form factor and became a staple of the 1970s and 1980s, most notably on Vangelis’ score for Blade Runner as well as many pop and rock hits. This version has been in development for over a year, reflecting the work involved not only in sourcing real instruments but also accurately modelling their many characteristics.

Cherry’s core design features are present and correct, with support for all major plugin formats and standalone mode as well as the latest processors across Mac and Windows platforms. The instrument’s Focus mode, which zooms in on the interface and lets you scroll around, is particularly useful here where there’s an awful lot going on in terms of buttons and sliders. As in its other synths, MIDI learn is nicely implemented and managed via right clicks and the dedicated MIDI pop-out panel.

It would be easy to get very granular about the designs of the two hardware synths but ultimately that wouldn’t tell you a great deal about what the GX-80 is like to play. Suffice to say there’s plenty of background on the product website, and it’s fascinating. Essentially it combines the extended feature set of the GX-1 with the functionality of the CS-80 which to all intents and purposes gives you two synths in one. There are two distinct voice layers, each of which can play up to 16 polyphonic voices. This lets you play two separate voices within the architecture of the synth with independent volume and panning. The keyboard can also be either split or stacked for more creative performance options – place a bass sound in the left hand for instance, or layer up for a fuller timbre.

The four polyphonic voice ranks (sounds) each consist of a voltage-controller oscillator, resonant highpass and lowpass filters, noise generator, sine wave, dual envelope generators and a velocity-sensitive VCA. The multicoloured tone selector contains the original CS-80s factory presets as well as a panel control for selecting layers and a Utility function for exchanging settings between ranks in a layer, the Lower and Upper sound layers, or even between presets. This makes changing parameters en masse far easier than doing it manually. To make managing all four voices plus their controls easier, you can choose to view either the upper or lower panel. Where a control is specific to the GX-1, this is denoted with text – particularly with regards to switching between the filter models found on each synth. 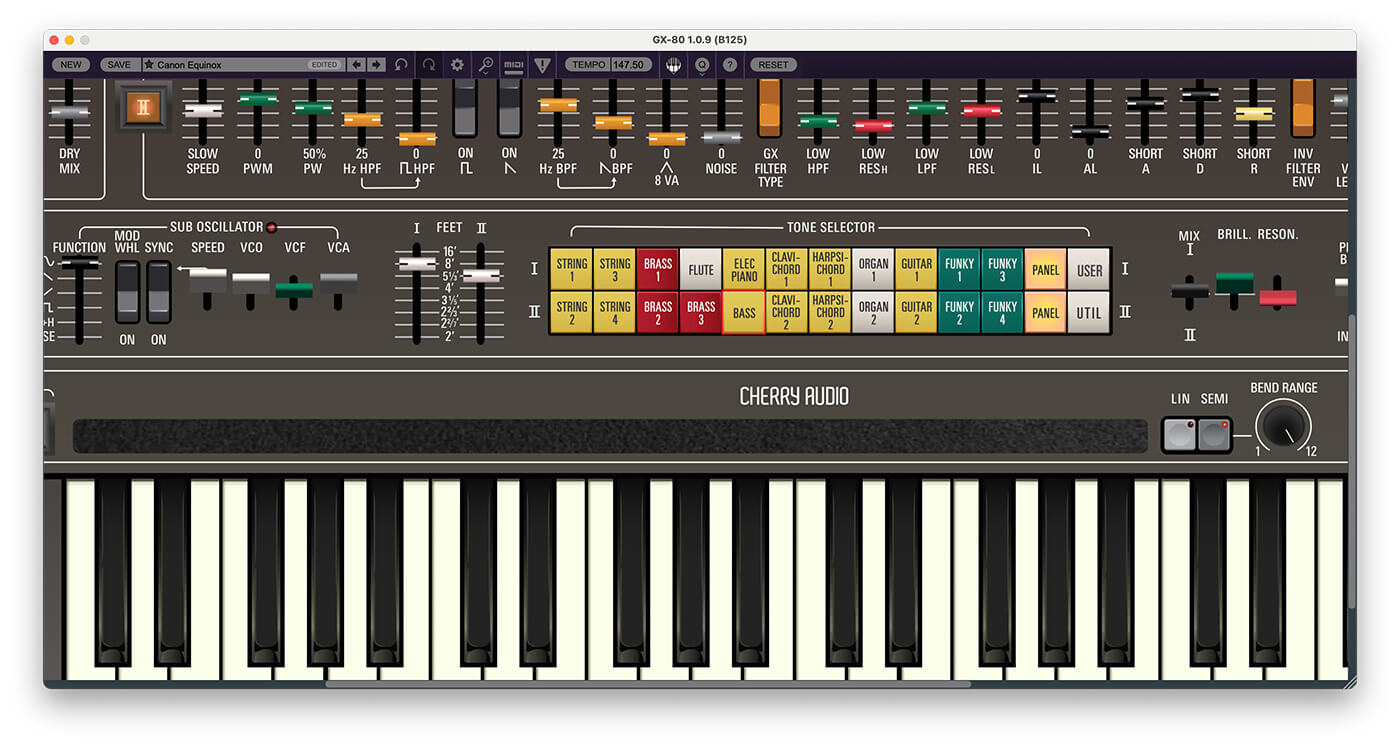 There’s some clever stuff going on with touch sensitivity as well. In addition to velocity sensing you get support for both polyphonic and monophonic aftertouch plus a unique “last-note priority” mode for simulated polyphonic aftertouch response. In practice what this allows you to do is simulate poly aftertouch with a monophonic aftertouch controller (your controller is likely to be one of these). By ‘leaning in’ to the notes you can continue to affect the sound, making for a more dynamic and organic effect. The onboard ribbon controller faithfully models the CS-80’s original and provides a great method to pitch bend in a way that’s more creative than a standard wheel would allow. Playing around with it you quickly find yourself making those unmistakable Blade Runner sweeps and bends. 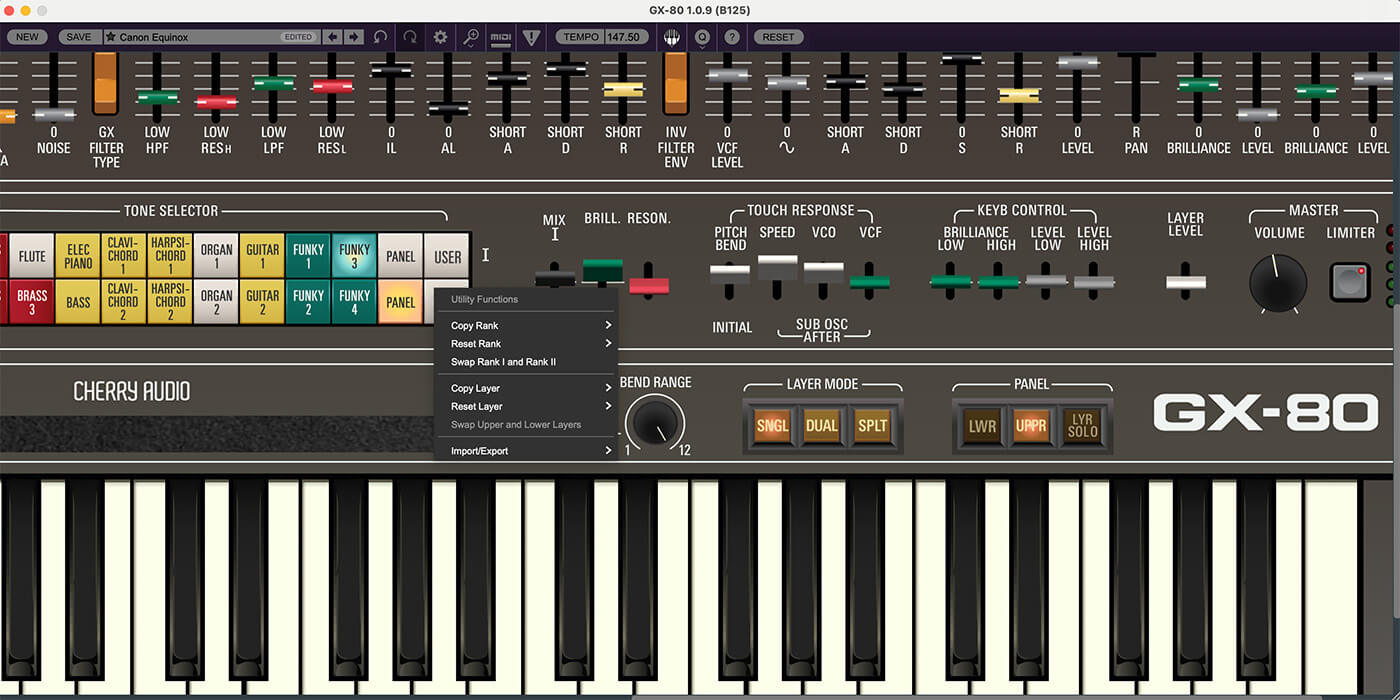 A powerful effects section is included consisting of chorus/rotary, flange/phaser, digital/tape delay with sync and reverb, all with global or dual layer modes. These really help to bring the instrument to life, adding lush depth to its already rich tones. The fact that there are multiple voices and layers means you can get very creative with sound design, especially when you throw in some panning to start spreading sounds across the stereo field. Fine-grained detuning, organ-style coarse pitch range setting and variable portamento and glissando settings are just a few of the other performance controls you can use to shape your sounds. 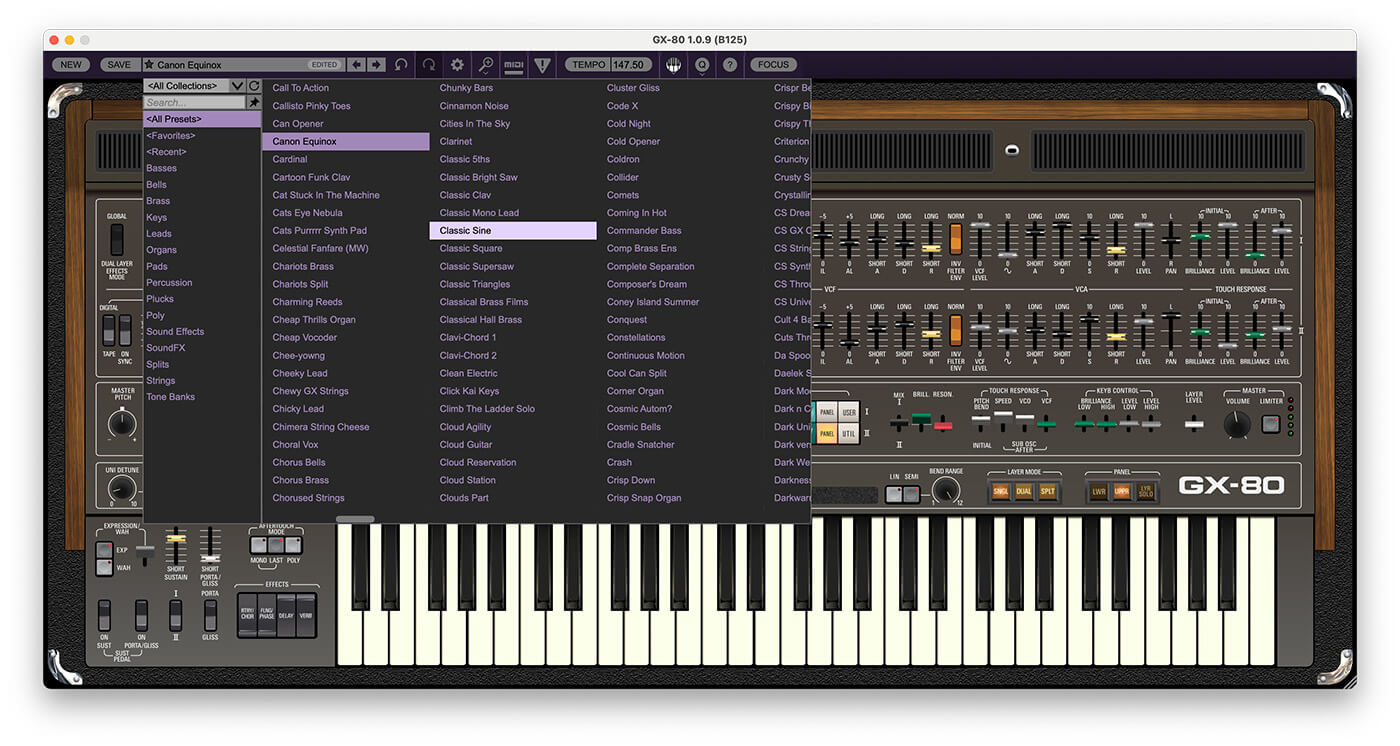 The 1000+ presets range from fat basses and huge, warm, evolving pads to spiky leads and animated, stacked patches that use modulation to create variation in the tones. There’s stuff here for everyone from dance music producers to sound designers and though people will have their own preferences, the multi-layered, fx-drenched patches are the ones that really did it for us. The developers have really captured the warmth and essence of the classic CS-80 sound and while users may understandably be less familiar with the GX-1, its incorporation here adds an extra dimension, letting you process and generate sounds in myriad new ways.

Cherry’s highly inclusive pricing structure means the GX-80 isn’t going to be limited only to pro users though it’s worth mentioning that there’s a fair bit to wrap your head around here if you want to get seriously into sound design and editing. It’s an incredibly powerful instrument, not least because it’s really two huge synths in one, and that means a lot of controls to contend with. This isn’t a criticism – you wouldn’t expect to buy a massively powerful piece of kit and breeze through it in an hour – and indeed you are quite free to just change the odd thing here and there and still get amazing results. It’s more of a reminder that if you do want to get really heavily into patch design you’ll want to spend a bit of time familiarising yourself with the way everything is put together. As ever a demo version is available for you to try and it’s highly likely you’ll fall in love with the rich and verdant tones the GX-80 creates. 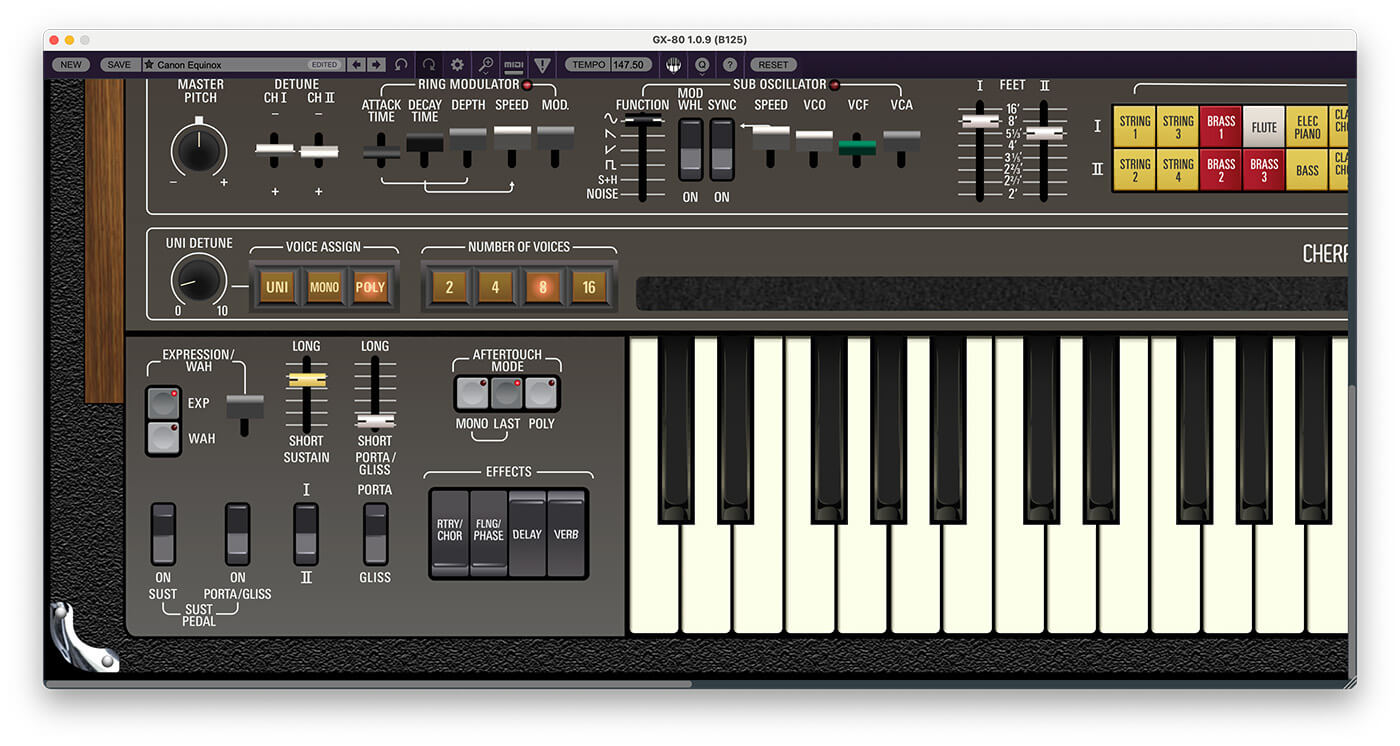