The Elka Synthex could have been a world-beating synth – Cherry Audio has brought it back and added a whole lot of 21st-century goodness. 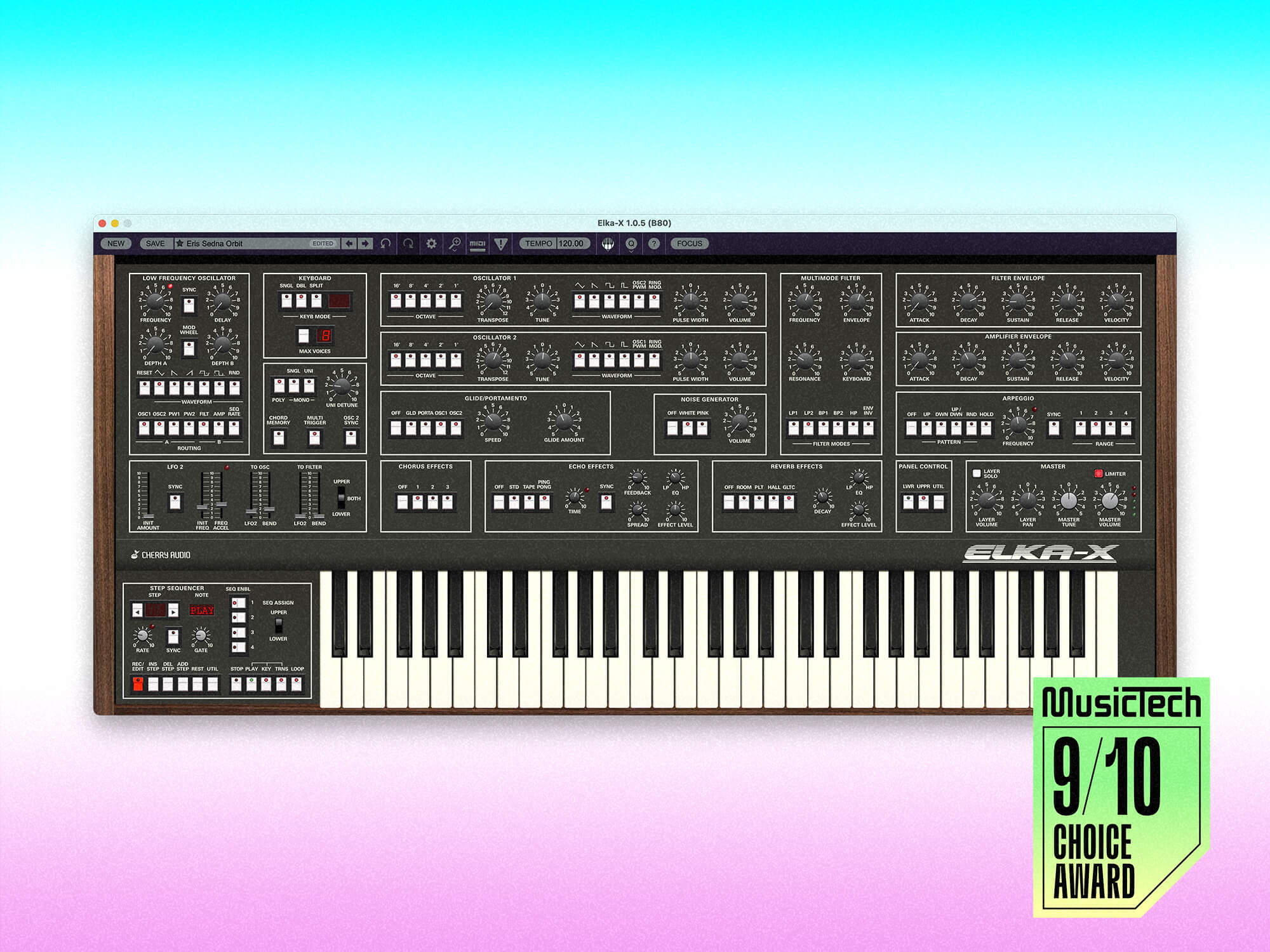 ⊖ Step sequencer has a bit of a learning curve

You could be forgiven for not having heard of the Elka Synthex. Created in the early 1980s by designer Mario Maggi in collaboration with Elka, it ought to have had a much higher profile but suffered a number of misfortunes. It was expensive, which wasn’t uncommon for synths at the time, but Elka was mostly known for making home organs, so it had a low profile among synth aficionados. Then Yamaha released the DX7 in 1983 and dominated the market. If you could even find an original Synthex today, it would set you back an eye-watering $15,000.

It’s no surprise, then, that Cherry Audio decided to recreate and expand this long-lost gem. The developer is renowned for selecting cult and scarce synths to track down, analyse and virtualise. The Synthex has features on tracks by artists including Stevie Wonder, Asia, Duran Duran and Jean-Michel Jarre. So, while you might not know the name, you’ve probably heard its sonic signature. Digitally-controlled analogue oscillators, multitimbrality and a four-track sequencer with realtime recording were just a few of the features that made it a particularly forward-looking instrument at the time of its release.

Coming in standalone and all major plug-in formats, the Elka-X costs just $39 from Cherry’s online store which, like most of their other products, is an incredible bargain. The level of work that goes into these instruments and the power they have makes the price quite remarkable.

The expected Cherry Audio layout provides settings and preferences in the toolbar, alongside a virtual onscreen keyboard, flexible zoom and focus modes for zeroing in on parts of the interface. A clever MIDI mapping manager can be deployed for connectin controllers, with MIDI learn easily assignable by right-clicking on parameters.

Few people will be familiar with the original hardware so Cherry has added and expanded a ton of features. At its heart are two two synth engines that can be played at the same time, either in a split or stacked layer mode.

The layers are managed in the Keyboard section which has single, double or split options and the option to use 16 voices of polyphony. A Panel Control lets you change the behaviour of the displayed controls to affect either the upper or lower layer, and by clicking on Util you can copy the settings of one layer to another or one set of effects to the other.

Elka-X’s onboard effects – chorus, echo and reverb all with multiple controls – are independent for each layer so while it’s cool to have each layer using different effects, it’s also helpful to be able to synchronise them too.

Understanding the two-layer system is crucial since most parameters work separately for each layer; unless you’re in Single mode or Split mode, where they affect the lower and upper key zones as assigned by you. Once you grasp this concept, the esoteric synth becomes much easier to understand.
The edits you make to the sound work the same way for either layer. The Master section lets you mix and pan each layer, as well as set global master tune, limiter, and volume.

The oscillators have triangle, sawtooth, square and variable pulse waveforms, plus independent tuning. There are playback modes for polyphonic, single voice and unison monophonic with unison detune, and a white and pink noise generator to add some bite to patches. 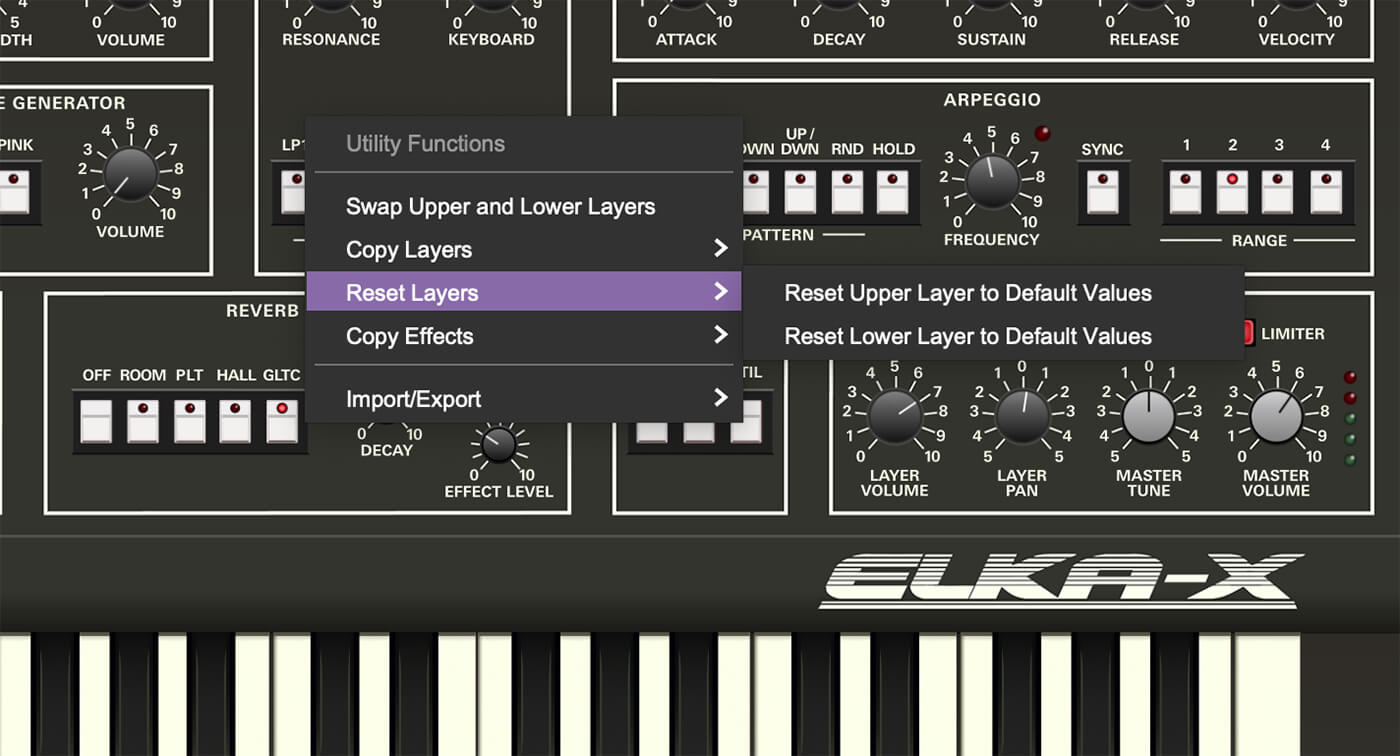 A CEM3320-style multimode filter has 12 or 24dB/oct lowpass, 6 or 12 dB/oct bandpass, or 12 dB/oct highpass modes. In addition, there are two tempo-syncable LFOs and two independent modulation sections with tempo sync.

The filter and amp envelope sections have multi-trigger in monophonic mode and there’s a chord memory feature, glide and portamento per-oscillator. Also, a futuristic-sounding, easy-to-use arpeggiator works per layer to let you animate your sounds. Tempo-syncable to your project, it’s fun to use and certainly takes less learning than the step sequencer.

The step sequencer allows you to record one to four separate monophonic sequences of up to 128 steps each, assignable to either layer and with the ability to copy data between tracks or presets. For anyone that’s never experienced hardware sequencing, it’s a mild learning experience but fun when you crack it. You’ll swiftly be creating mini-sequences within a patch.

The Elka-X’s sonic capabilities are a bag of surprises. While it clearly has an 80s feel, it’s definitely different from the sound of Oberheim synths and Sequential’s Prophet series from the same era.

The dual-layer, multitimbral and polyphonic design coupled with the effects, arpeggiation, modulation and sequencing that work independently on both layers make for a seriously dynamic-sounding instrument that excels with melodies, sequences and deep, rich sounds. They sparkle with life, and it’s not just the sequences.
Venture into the chorded presets, or create one of your own, and you’ll find perfect patches for 90s-style electronica. The pads are beautiful for sound design and the sound effects and keys eminently usable across a range of genres from ambient and pop to sound design. You get a distinct Stranger Things vibe from this synth and even if that is a slightly obvious touchpoint it’s a popular one.

You probably didn’t know you needed a Synthex in your collection, but once you try the Elka-X, you’ll wonder how you ever lived without one.