If pristine audio recordings were priceless Ming vases, Caelum Audio’s latest offering would be a bull popping into a retail outlet for something to put his flowers in. 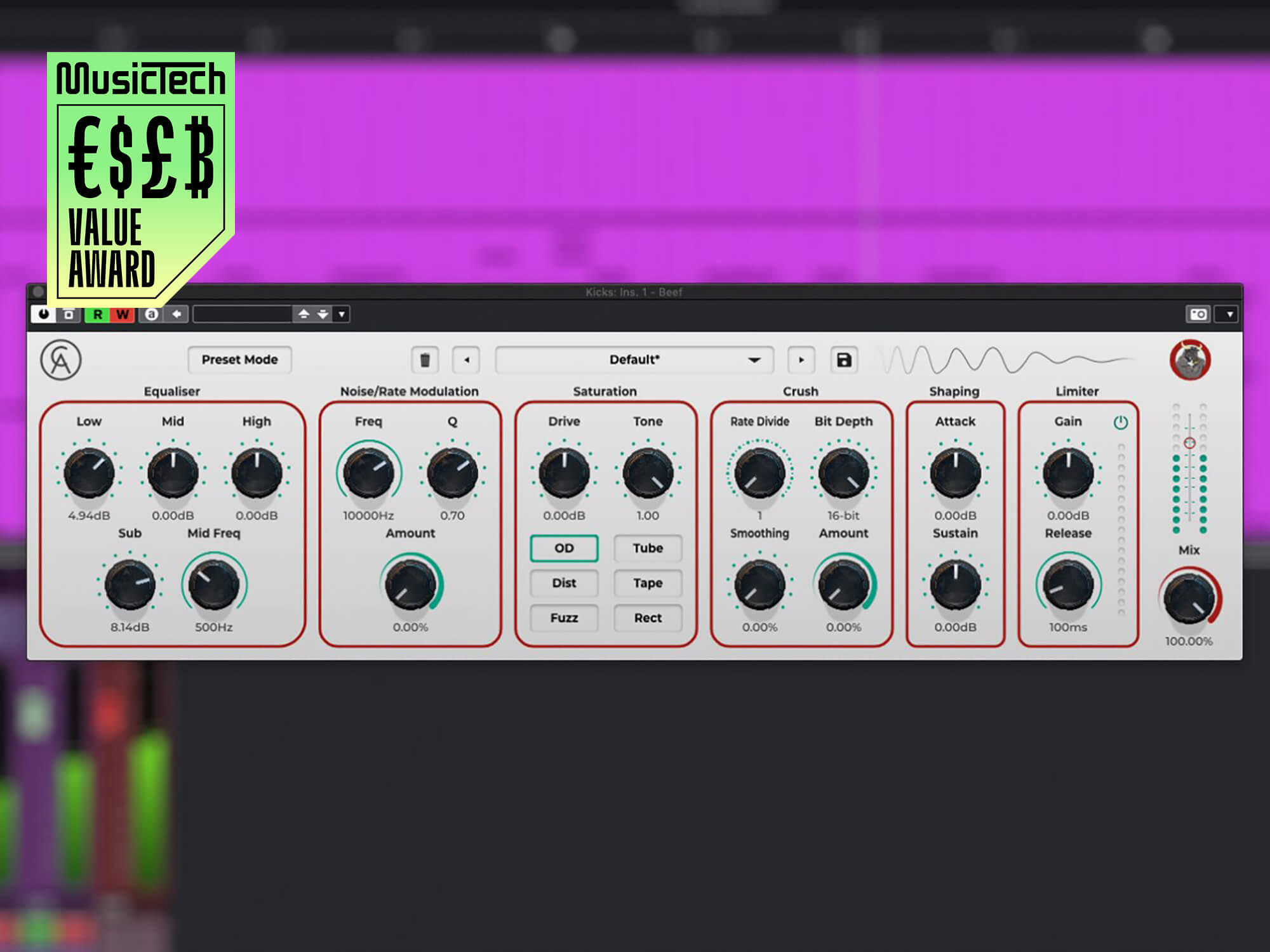 The quest to create perfect sound recordings is as old as recording technology itself. Just think of the thousands of hours of boffinry, not to mention the millions of pounds, that have been spent taking us from Edison’s wax cylinder to the modern DAW. Then along comes Caelum Audio with a raging bull of a plug-in whose sole desire is to trample that pristine audio into a quivering pulp. Olé!

Beef brings together a collection of six processors, the majority of which specialise in goring your audio in one way or another. In standard operating mode, the controls for each processor are arranged in groups across a clean, attractive, sensibly laid out interface. Things get cleaner still if switching to Preset mode, where all controls other than the wet/dry mix dial are hidden. But all of this cleanliness belies the dirty mess that Beef can make of your audio. Whichever mode you’re in, the window includes a live waveform graphic, and this gives meaningful visual feedback of just how beefy your signal is becoming.

Beef’s first stage is a four-band equaliser with low and high shelving bands (the low band is labelled “Sub”), a fixed low-frequency peak band, and a sweepable, peaking mid-band. Each band provides up to 15dB of boost or cut, but Caelum does not specify the frequencies of the three fixed bands. The low peak appears to centre on 100Hz, while the shelving bands have very long, gentle slopes that appear to have corner frequencies of approximately 350Hz and 3.5kHz for the Sub and High bands respectively. When applied to drum instruments and kits, synths and basses, these frequencies work quite well but are not particularly useful for EQ-ing a full mix or complex stem.

The first of Beef’s sound-tramplers, the Noise/Rate Modulation module, uses white noise to modulate the frequency of your audio. You can tune the noise signal via Frequency and Q controls and the strength of the effect with an Amount dial. The noise acts as a control voltage, so the modulation it applies is very fast, resulting in a crunchy dirtiness that adheres to the original sound. It doesn’t just sound like noise overlaying the original signal. This works brilliantly to create and enhance higher frequency components in kicks, giving them a unique character and helping them stand out in the mix.

The Saturation stage comes next, and this is a fairly straightforward affair offering simple Drive and Tone controls. You can choose from six different types of saturation: Overdrive, Tube, Distortion, Tape, Fuzz and Rectify. Each option has a distinct character, making this a versatile module. However, we hit problems with the Tape option, finding that it would often trigger a fault inside Beef that could only be remedied by switching the plug-in off and on again – not a huge inconvenience, and doubtless something Caelum will fix with an update.

Next up is the Crush stage, a good-ol’ honest-to-goodness bit crusher. This provides both a Rate Divider, which can reduce the sample rate all the way down to 1/256th of the original value and a Bit Depth adjustment that ranges from 16-bit down to 1-bit. In common with all bit crushers, Beef’s Crush processor can do severe damage to your audio, reducing it to little more than digital bleeps and blarps, if you so wish. You can temper the amount of damage using the stage’s Amount control, which is useful. A smoothing parameter evens out the amplitude steps between the crushed bits, audible as a reduction in the high-frequency artefacts introduced by the crusher. This gives a nice bit of extra control over the sound of the crusher.

Crush passes its output to the Shaper stage, a module that allows adjustment of the signal’s attack and sustain characteristics. Used on percussive sounds, drum parts and bass lines, this provides enormous scope for modifying the prominence and impact of a sound.

Last in line is a hard Limiter, which is invaluable given the amount of gain and noise that Beef can add to a signal. The module responds very quickly, but given how hot the signal can become, the limiter’s ±15dB of input gain adjustment can be insufficient, especially if you don’t want to run hard into the limiter. You can get around this by switching off the module altogether, and using the output level control to keep the signal level under control, but you then lose the speaker and ear protection offered by the module.

Oddly, the limiter is the only one of Beef’s processing stages that you can bypass in this manner; the rest are always on. You can dial out their effect with the controls, but this isn’t a substitute for per-module bypass buttons. It’s a surprising omission and one that would allow quicker A/B comparisons.

The modules included in Beef are, individually, fairly standard fare, and the sort of thing that is included with most DAWs. There’s a definite advantage to having all of these processors bunched into one plug-in, though, as it is much more convenient to work in a single window and much easier to manage automation too.

In practice, Beef won’t work on every source. It’s least useful when used across a full mix, or stems containing varied instrumentation. That’s because the harmonic complexity the plug-in creates is generally overpowering when working on an already complex signal.

However, Caelum Audio designed Beef with drum and synth bass processing in mind, so it’s little surprise that it does a brilliant job of injecting individuality into overused 808 and 909 sounds. And it can turn your run-of-the-mill square wave bassline into a screaming, snarling monster. Beef can also do a phenomenal job with synth parts, enhancing them with extended harmonics and constantly shifting highlights. Also, you can give vocals a lot of additional life and character with it.

The best part of all, though, is the price. Beef is only £30. Such exceptional value more than makes up for any shortcomings or limitations. It makes Beef a no-brainer whether you want to beef up your audio, bully it into submission, or trample it into a quivering, gory pulp.