A makeover and some new tricks ensure that this versatile plugin retains its crown as the multi-effects monarch. 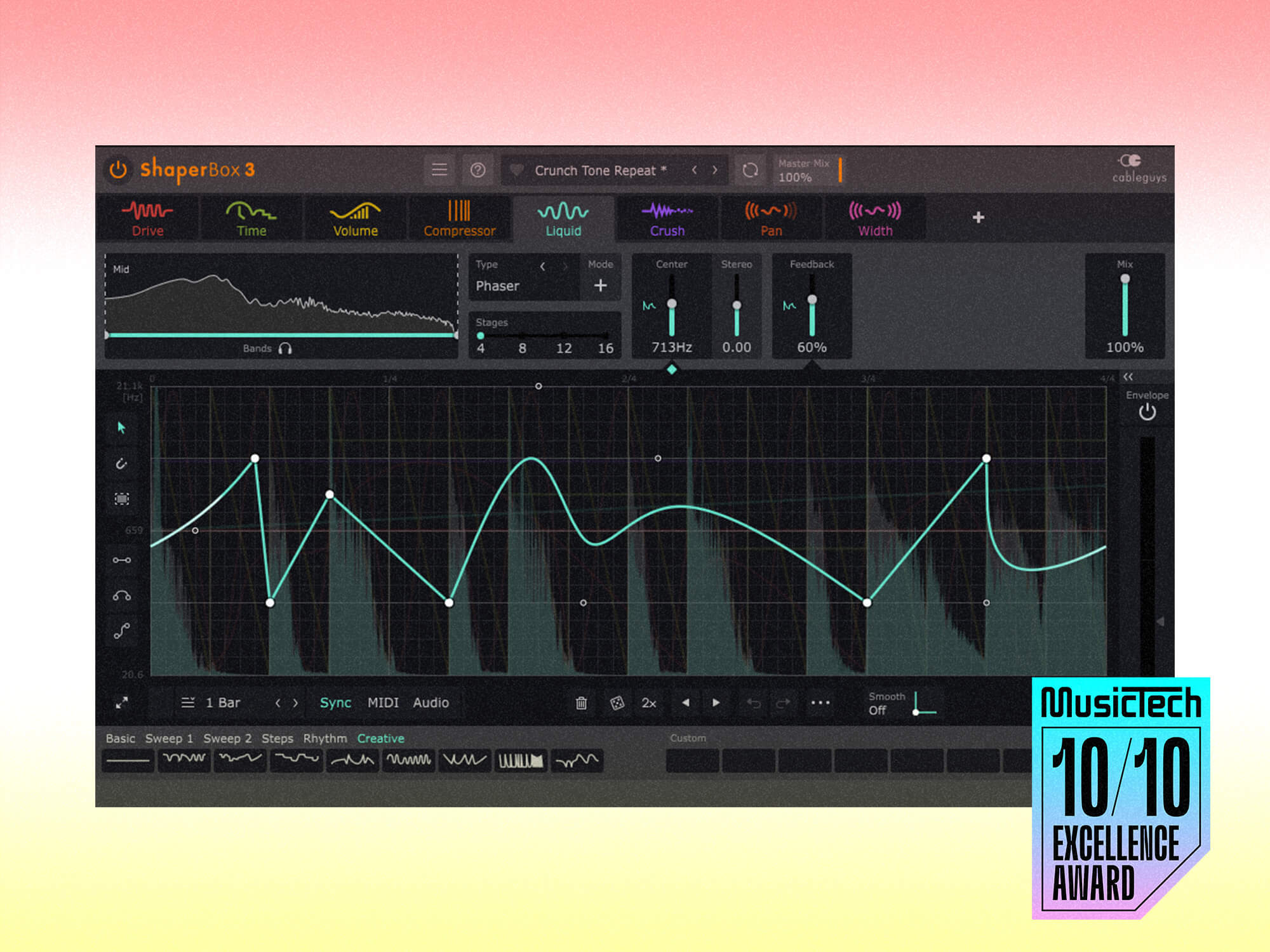 Since arriving in 2019, ShaperBox 2 has been an indispensable part of our workflow, useful as a mixing tool and as a creative sound-design toolbox. Although well designed for modulating effects over time, though, its reliance on MIDI has meant it’s always been fiddly to set up for triggering. No longer. With version three, Cableguys has added audio triggering, as well as other useful improvements that maximise the plugin’s usability.

ShaperBox 3 hosts nine effects, or “shapers”, which can be purchased individually or as a bundle. The Shapers include volume, filter, pan, width, time, drive, crush and noise, as well as a new addition, liquid. The parameters for each effect can be modulated using a flexible split-point LFO, or an envelope follower, and all shapers can be split into three frequency bands. With ShaperBox 3, Cabelguys has also tweaked the GUI in multiple ways in an effort to simplify usage and tidy up menus. The changes are for the better and should help newcomers navigate the shapers and parameters, even if those already familiar with ShaperBox 2 might have to relearn a few things.

LFO editing is now easier. You can add breakpoints with a single click, quickly toggle nodes between curves and points, and make selections without having to change tools. There’s even a new randomise button for creating unpredictable variations, though it lacks enough control options to be properly practical.

The star of the show is the new Audio Triggering mode. Ducking bass around a kick drum has always been the most common use for the ShaperBox VolumeShaper. In past versions, though, you were stuck with a set loop or forced to use MIDI message. With Audio Triggering, you can feed a more complex kick drum pattern into the sidechain input, which will trigger the LFO shape any time the signal passes the threshold. This can be applied to any shaper too – you can have audio-triggered pitch scratches using TimeShaper, or set up a wild filter sweep on a pad every time a snare hits. To make decisions easier, there’s also an External Sidechain view that superimposes the sidechain audio on top of the waveform, which is useful for matching up things like kick tails and ducked bass shapes.

On the Audio Trigger settings page, you can adjust the threshold, input filter, sensitivity, and choose from Drums, General and Complex algorithms. You can also time-shift the trigger forwards or backwards by 0.4ms to make sure it captures any peaks, plus you can send the triggers out of the plugin as MIDI notes. On top of this, you get a clear graphic display that shows exactly when triggers are detected on the waveform over time. Audio Triggering is the most popular user-requested feature and it’s been a long time coming. Now that it’s here, it’s opened up entirely new ways to use ShaperBox.

The new LiquidShaper module lets you choose between a flanger or a phaser with four to 16 stages, and can be used for metallic rhythms, triggered comb sweeps, watery effects and more. You can modulate the centre frequency and the feedback separately, and there’s also a stereo slider that offsets the frequency in the left and right channels for a super-wide sound. You can flip the effects from positive to negative mode too. Sadly, it seems we’ll have to wait a little longer for a reverb or delay shaper.

ShaperBox now features a separate multiband compressor module, which was previously built into VolumeShaper. This flexible tool can be used for general mixing tasks, to tame the wild peaks that the other shapers throw out, or to help bring out quiet details. It goes some way towards solving one of our previous issues with ShaperBox too – the lack of overall volume control. Just place the compressor module last in the chain (or anywhere else) and you can use the make-up gain to rebalance the volume. Easy. That said, would it have been so hard to add a simple volume dial at the top of the GUI?

Another welcome improvement is the Master Mix dial. Before, if you had several bands of effects on several shapers, you would have to automate all of the individual mix amounts to fade it in. Now you can do all this with the Master Mix control.

Flicking through the presets and targeting ones that use multiple shapers demonstrates just how powerful this plugin is. You can instantly transform a simple beat into a modular-sounding, bleepy groove, or turn single sustained notes into drain-pipe risers. The variety is enormous, from simple mixing tools for panning, width, compression and colouring to wild stutters and pitched glitches.

The preset browser has been improved too, with more category tags and shortcut collections. It also appears to have been simplified, with the five-star user rating system replaced by a much simpler favourites toggle. As before, you can sync to the Cableguys preset cloud for additional presets created by the in-house sound designers. It’s a shame, though, that the community side of the preset system has been removed, whereby users would submit their presets for potential inclusion in the pot.

In the three years since ShaperBox 2 was released, we’ve seen several exceptional plugins of a similar nature, such as iZotope’s StutterEdit 2 (£174) and Devious Machines’ Infiltrator 2 (£99.99). Given that it lacks delay and reverb, plus some other features found on these plugins, you might argue that ShaperBox 3 isn’t as versatile. However, for ease of use, GUI layout and fluidity of editing, ShaperBox 3 is still the king. It was already a fantastic plugin, but the new additions, especially the Audio Triggering mode, make it a joy to work with. It’s powerful and inspiring. Whether we’re working on technical mixing tasks or wild sound design, we can’t imagine producing without it.