Five effects in one, and plenty of flexible new tools for mangling audio. We unpack ShaperBox 2 to see what treats are inside. 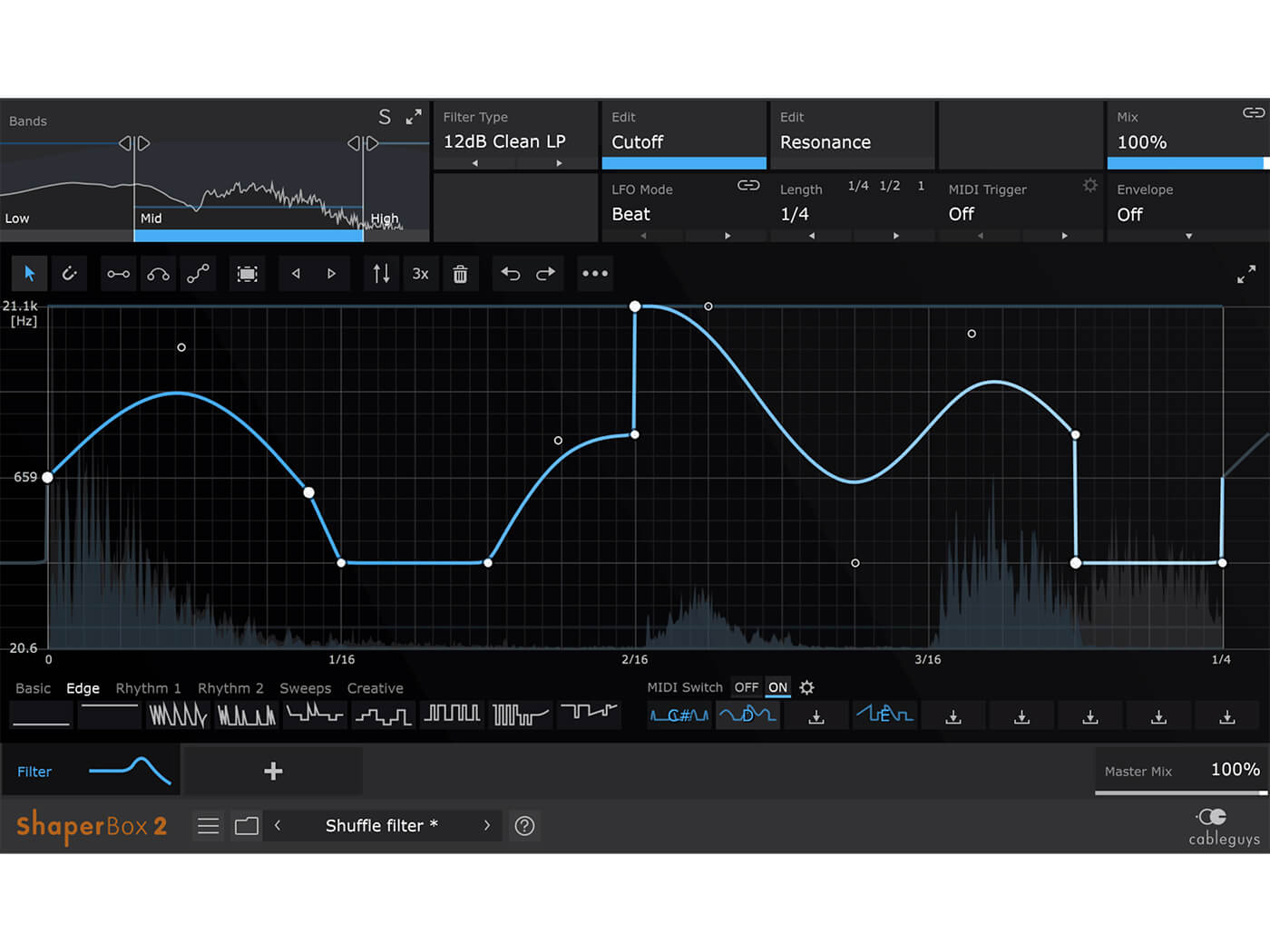 We first reviewed ShaperBox around three years ago, and since then it’s become an absolutely essential plug-in that gets used multiple times in every track. From simple sidechain ducking, through to creating crazy glitch drum edits, it’s proven itself as an incredibly useful tool for a range of tasks. It is with great excitement, then, that we now have version 2, which features a slicker GUI and a range of new features for warping audio in creative ways, but can it live up to the legacy of its predecessor?

Quick on the draw

I’ll save you from skipping to the end of the review for the answer… Yes. Yes, it can. And it’s excellent. ShaperBox 2 features new versions of the same five effects (VolumeShaper 6, FilterShaper Core 2, PanShaper 3, WidthShaper 2 and TimeShaper 2), and as before, each is loaded into a single plug-in, with the option to rearrange modules. If you just want a specific effect, then they are available to buy separately, but you get a heavy discount buying the bundle. You have a large window in the centre where you can draw your own LFO curves for each effect, with new drawing Pens for quickly adding in lines, curves and shapes, or selecting, editing and copying the whole curve. Throw in the often-requested feature of a resizable GUI, and you’re left with a much quicker, more accurate and more enjoyable system for editing your modulations.

These LFO shapes can be synced to the host, allowed to run free, or triggered by MIDI pitch, and as before, there are several quick preset shapes, plus the ability to switch to 9 user slots via MIDI input so you can perform edits on the fly. If you’re looking for inspiration, then there are currently over 1700 presets that make use of one or more effects. Thankfully, you can use modifiers to search for presets that use particular shapers, and there are 11 pre-made collections called things like Tape-Stop, Duck and Instant Remix, with more being added regularly via a button that syncs to the Cableguys Preset Cloud. 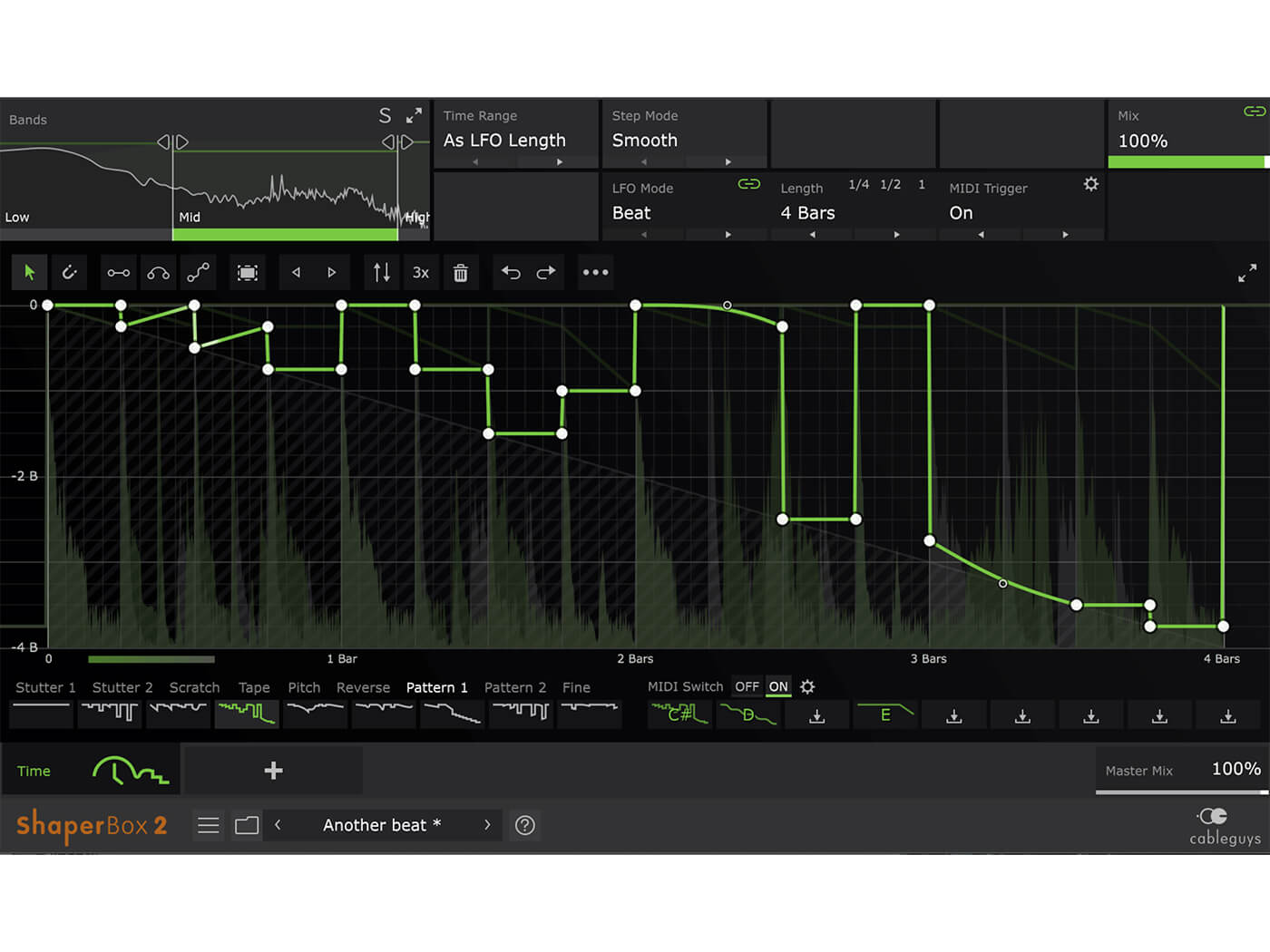 For extra flexibility, each module has multiband operation, with three bands featuring 6, 12 or 24dB crossovers. A new addition here is the multiband being available on the Filter module, which is great for adding more complex movement across the spectrum, or for creating crazy filter sweeps whilst keeping the bass frequencies more stable. The Filter also has new Notch Phaser and Peak Phaser filters, which extends the total palette of sound design options to 28 filter types.

The biggest new addition though, sees the Filter, Pan and Width modules gaining a snazzy new Envelope Follower that can take it’s input from one of the bands, from the whole signal, or from an external sidechain, with a HP/LP to fine tune the response. This is super flexible, with Threshold and Amount controls alongside Attack, Hold and Release, a positive and negative Shift slider, and Depth multipliers to take total control over how the signal reacts. This is arguably the most exciting addition to the whole package, as it opens up more reactive and complex modulations to each parameter. As an example, you could use it with the Width module on a drum beat to have the initial transient hit in mono, then let the tails spread wide as the envelope opens up. Or you could have an external snare signal duck out some high frequencies by pulling down a low-pass filter on a high-hat track.

Instead of an envelope follower, the Volume Module has been upgraded with a ‘British-inspired’ compressor that can be called upon for punchy level control, with the option of external sidechain triggering. Things get interesting though, when you start drawing in LFO curves on top, as these will directly affect the gain reduction curve, allowing you to do some very precise, visual compression moves. Elsewhere, the Pan module has had a Haas effect added, for rhythmic, psychoacoustic widening, and the Time module has a new Fine mode that can be used to create subtle tape/vinyl ‘wow’ effects and chorussing. Don’t worry if this sounds like a lot in one plug-in, as the tip tool at the bottom of the GUI has also been expanded so you can easily learn about pretty much any control simply by resting your mouse on it.

All of these features add up to a massively flexible plug-in, with many uses, but here are a few that we like to use if for; Turning down individual ghost notes on a drum loop by a few dB, reducing the brightness of a kick drum in a loop that had a cymbal on top by using a LP filter, controlling the stereo width of a single, overly wide hit in an old soul sample, and adding some subtle stereo movement to a static hi-hat loop. This is ShaperBox at its most basic, but it’s very useful for these types of task and can save lots of fiddly automation and editing. If you push things to the extreme and start chaining modules together though, then you can create some wild, audio-mangling presets, and the new Envelope makes my brain hurt with the possibilities.

Standing in the way of control

If we’re looking for minor niggles, then it would be useful to have a final master output volume so that you can volume match after you’ve applied filtering and other effects that might shrink the sound. Technically, you can now add gain per band on VolumeShaper, but that’s more fiddly than a simple output gain. When it comes to FilterShaper, it would be great to be able to automate the Cutoff and Resonance sliders, so that your shape can be moved up and down across the length of your track.

It’s possible that there’s a technical limitation as to why that can’t be done, so for now, you can approximate a workaround using the Envelope Amount or Shift sliders. Finally, it might have been nice to have an extra new Shaper to throw into the mix, possibly a delay or reverb type effect that could be sequenced and manipulated. Although, to be fair, the new Phaser filter types and Fine mode on the TimeShaper have technically added phasing and chorus style sounds to the palette, so maybe we’re just being greedy. We’ve also been reliably informed that a new Shaper will be coming soon. 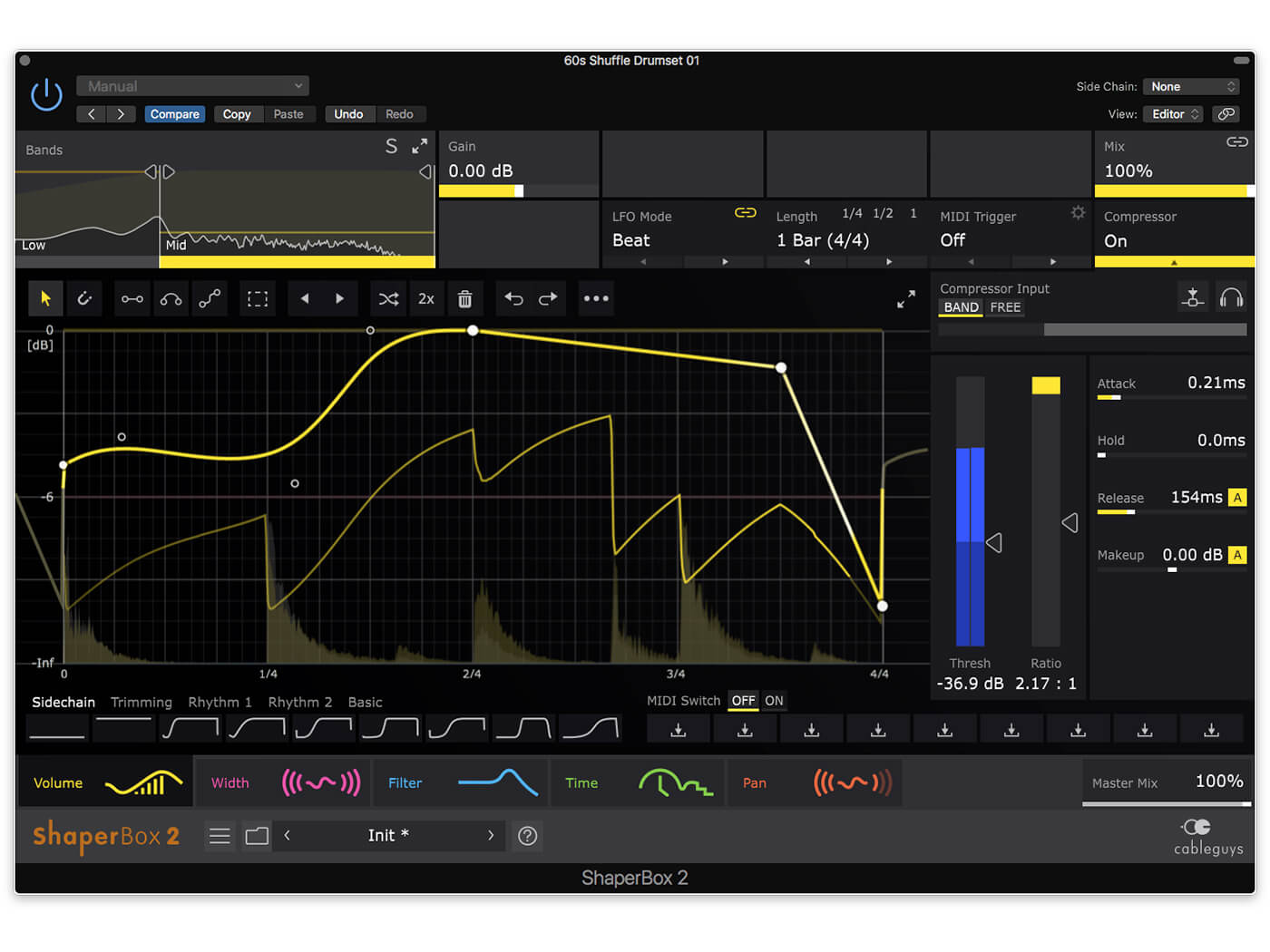 On the surface, ShaperBox 2 is the same fun suite of effects, but when you look at the details, the whole package has been dialled up to 11 and could easily be called ShaperBox Pro. The GUI is slicker and smoother, with much more flexible editing, and each Box has added extras alongside the excellent Envelope control, which greatly expands the possibilities. Whether you’re using it for basic mixing duties or complex sound design, it’s intuitive, inspirational and highly versatile.

ShaperBox should be an essential companion for anyone working with loop-based music. Purely on a time-saving, functional level, it gives you quick tools that can be used in place of fiddly editing and automation, and you can breathe new life into static audio loops. Beyond this, it can also be used for creative audio destruction, and tinkering away editing curves or previewing some of the presets can instantly spice up anything you throw at it. The new features help expand the sonic possibilities further and it’s true power and usefulness only reveal themselves over time as you come up with new ways to use it. You might already have some LFO based effects in your arsenal, but having all the Shapers in one unified, multiband package makes editing easy and intuitive. 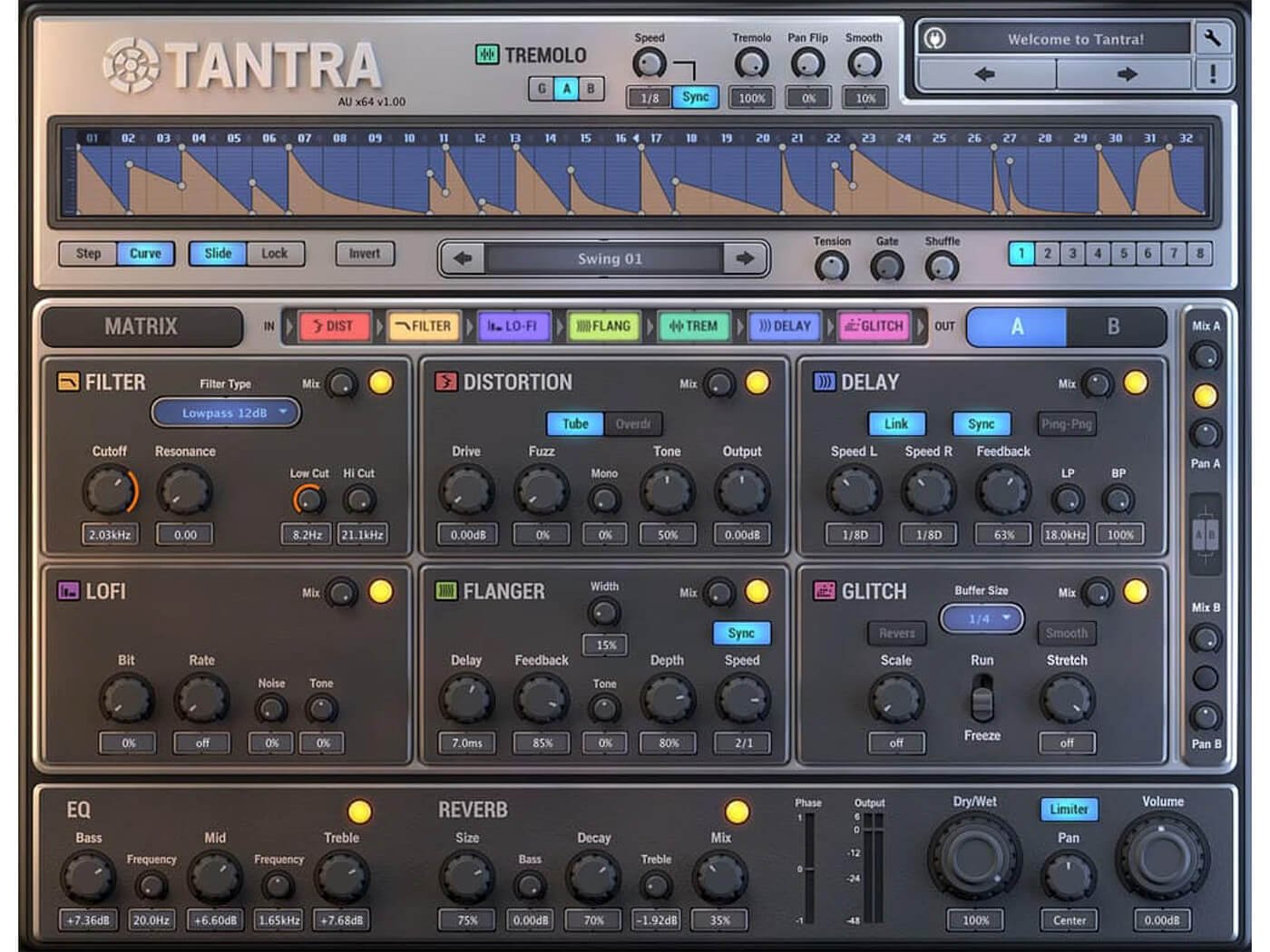 Tantra is a multi-effect plug-in with more FX than ShaperBox as it also includes distortion and delay, plus master EQ and reverb modules. There are eight modulation lanes and a flexible mod matrix, but it lacks some of ShaperBox’s other features, with less fidelity when it comes to drawing in the curves. 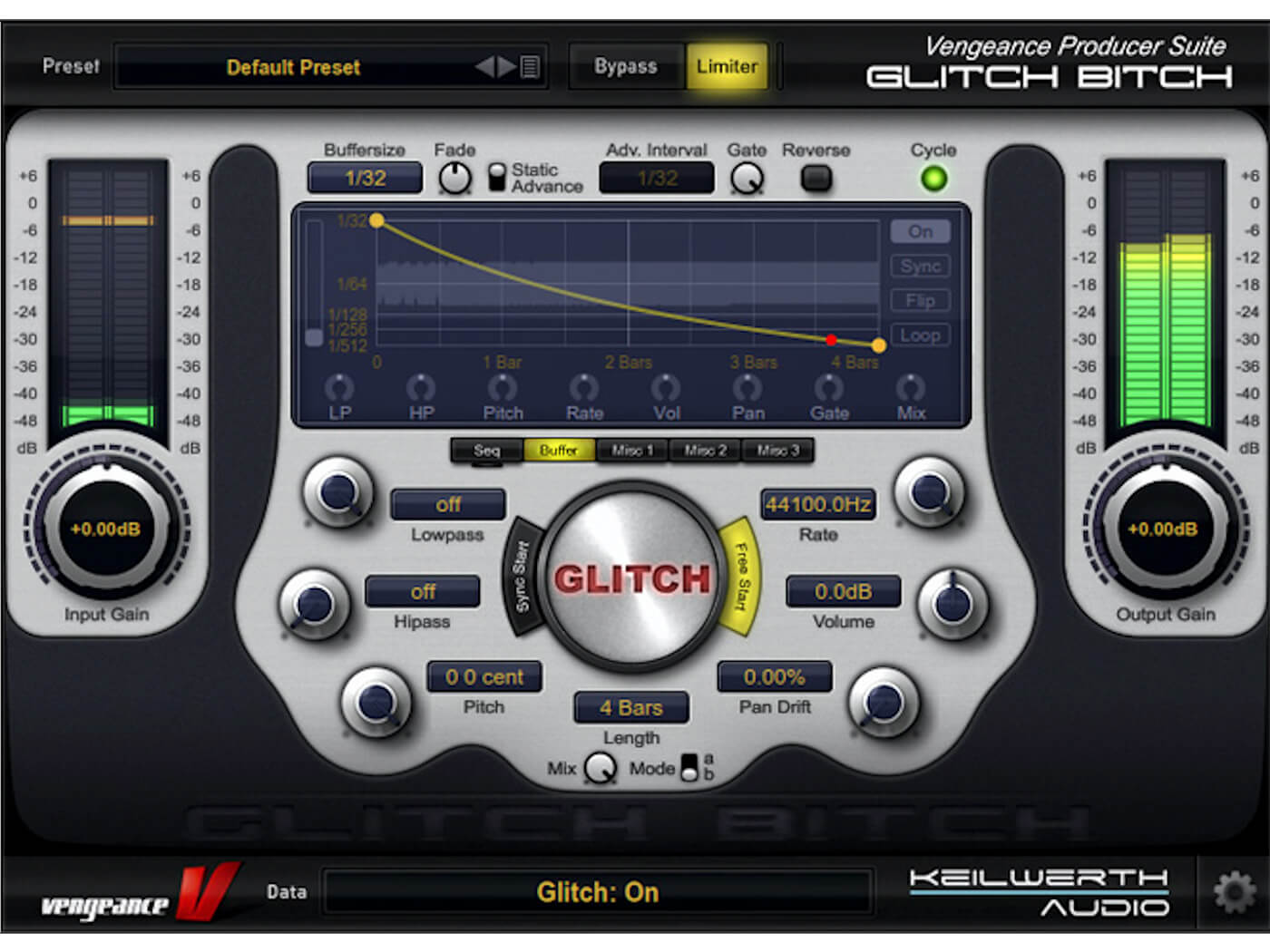 If you’re looking purely for glitch effects, then Glitch Bitch has some great presets and can create complex edits to your audio. There’s additional modulation of volume, pan, HP and LP filters and more, but it lacks the refined drawing tools, envelope followers and multiband operation of ShaperBox.