It’s undoubtedly one of the most distinctive-looking examples of music technology, but can the tactile, vintage charms of this coveted mastering compressor make the transition into the software world? 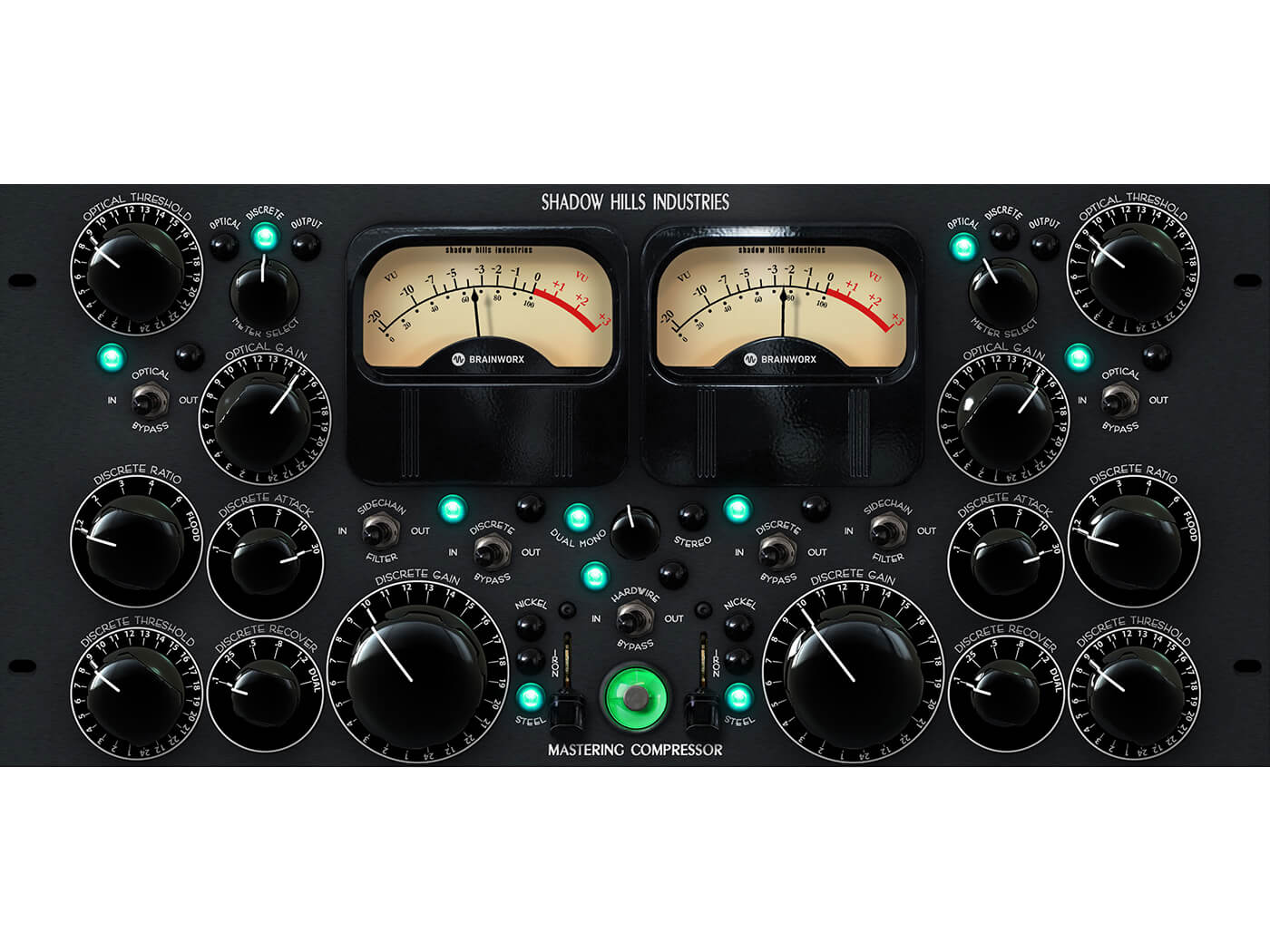 Formed around the year 2000 by punk and underground producer Peter Reardon, Shadow Hills Industries is a somewhat mysterious company. Those who have heard of Shadow Hills know of the impressive reputation the company’s boutique pro-audio hardware commands, not to mention the serious price tags associated with it. But Shadow Hills tends to avoid advertising and marketing, relying instead on reputation and word-of-mouth alone – it’s almost like a secret society where if you know, you know – and if you don’t know, you don’t need to know!

This mask of secrecy slipped a few years back, however, when Brainworx developed a model of the Shadow Hills Industries Mastering Compressor, a high-end dynamics processor with several unconventional features. This was released as a UAD plug-in for use with Universal Audio interfaces and satellite DSP hardware, where it rapidly became one of the most popular and respected dynamics plug-ins available on the platform. Brainworx has now updated its model and, through its partnership with Plugin Alliance, has released this for all plug-in formats: VST, AU and all flavours of AAX.

Visually, Brainworx has done an excellent job of aping the look and styling of the Shadow Hills Mastering Compressor (let’s call it the SHMC from here on), and has accurately captured the chunky, military-grade rotary and toggle switches found on the original hardware. But it’s how the processor operates that’s of most interest, and this is what makes the SHMC stand apart from the competition. Like many dynamics processors, the SHMC has two processing channels that can be linked for stereo operation, or used independently in a dual-mono configuration; the intriguing thing is that each channel has two compression stages that can be used individually or in series, and three transformer models that change the character of the sound.

SHMC’s first compression stage is an optical compressor. Like most compressors of this ilk, this has a single control to both reduce the threshold and increase the ratio of the compression being applied. The optical compressor’s release phase is a two stage, programme-dependent affair similar to that found on the classic UREI LA-2A, creating a natural and transparent release curve.

The output level of the optical stage can be adjusted to make up for the stage’s gain reduction and to drive the signal arriving at the second compression stage. This is a discrete VCA-style compressor with independent threshold, ratio, attack and release (or ‘Recover’ as it is labeled on the SHMC). The ratio can be switched between 1.2:1, 2:1, 3:1, 4:1, 6:1 and ‘Flood’, which gives an extreme 20:1 ratio.

Attack and release settings are similarly switched rather than being continuously adjustable, the former from 0.1ms to 30ms and the latter from 0.1s to 1.2s. The release section also has a ‘Dual’ mode that mimics the two-stage release of the optical compressor. 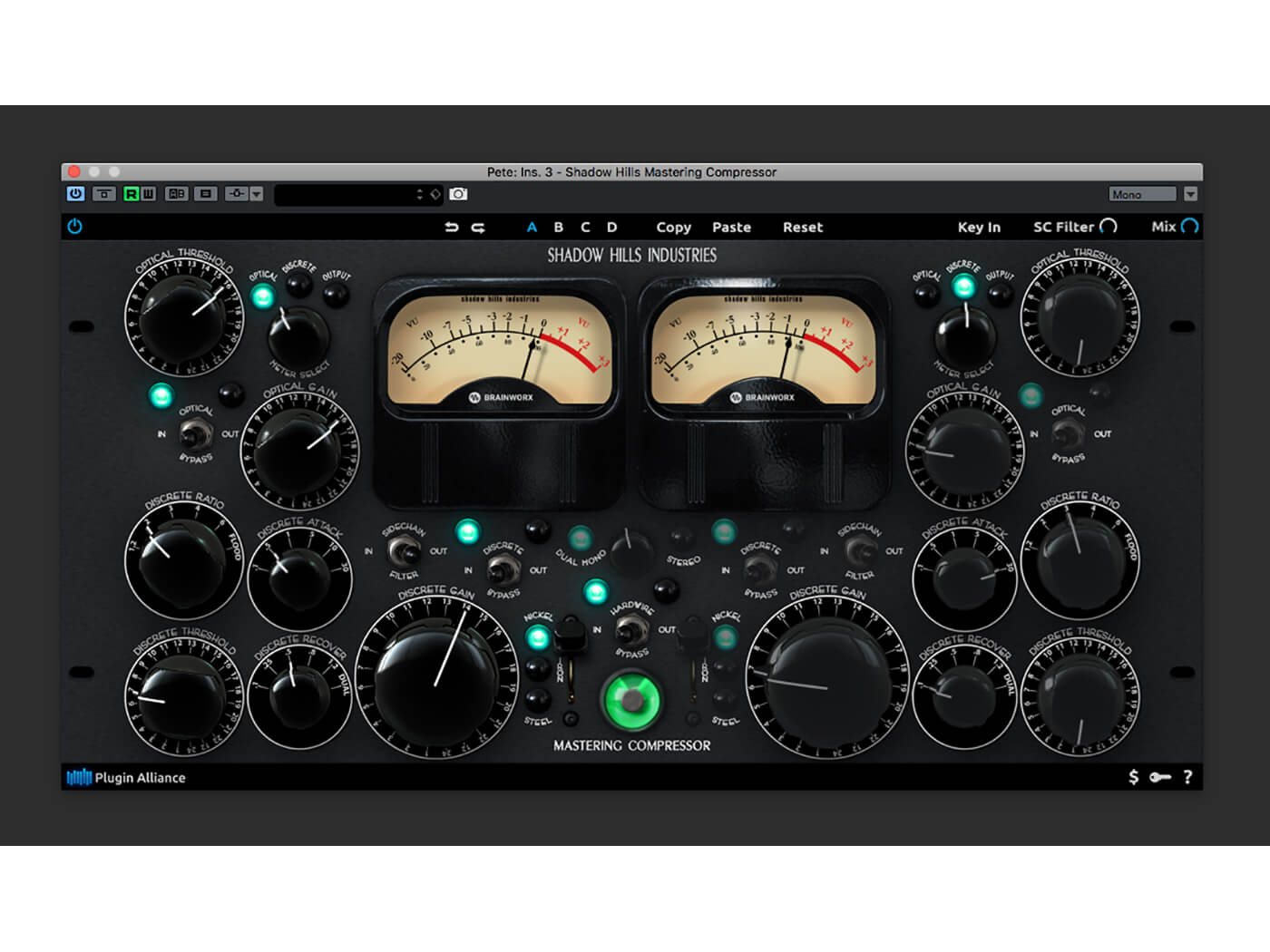 The discrete compressor’s big, chunky output gain control feeds into the final transformer stage of the processor. In the original hardware, this stage offers a choice of three different transformers, each created using wire made of different metals – nickel, iron and steel – and each wound in different ways. Switching between the different transformers changes the character of the sound in subtle but appreciable ways: Nickel adds distinction and airiness to the upper mids, Iron fortifies and smooths the mid and lower-mid and Steel thickens and warms the lower end of proceedings.

SHMC also has a so-called Magic Eye meter, a glowing green ring that, in the original hardware, is actually the end of a vacuum tube. This gives something of an indication of the level and crest factor (ie, difference between peak and average signal level) of the processed signal. It isn’t easy to describe how it does this, but suffice it to say that it’s more of an intuitive guide than an accurate readout; it looks pretty cool, too!

Things are topped off with a switchable sidechain filter with which you can remove low frequencies that would otherwise cause the compressor to, for want of a better word, ‘pump’. There’s also the ability to store four different setups – A to D – in each instance, and call these up instantly with the click of the mouse.

Two into one does go

The SHMC’s two-stage compression takes a bit of getting used to, but once you’ve played around with it a bit, it all starts to make sense. Optical compressors are generally good for gentle progressive compression that tames dynamics without being too obvious about it, while VCA compressors are good for bringing peaks fully under control and for evening out longer-term volume differences. By combining the two, SHMC allows the user to use relatively gentle settings on both, resulting in a very transparent, un-pumped compression effect whilst without compromising the punchiness of the resulting sound. If you want a more noticeable effect then the SHMC offers various ways of achieving that, each with its own character. The different transformer models add a whole other range of tonal choice, too, especially if driven hard by the discrete stage’s output gain.

The SHMC can turn its hand to more than just mastering, however: it serves very well as a buss compressor, especially across drum or backing vocal submixes, retaining clarity and definition while adding tightness and presence. And despite its name, the SHMC is an excellent channel compressor, too: it’s perfect for vocal and speech processing, sounds fabulous across brass and lead synths, makes snares snappy and gives solidity and character to basses and kicks. It is also just about the best compressor for acoustic guitars that I’ve ever had the pleasure to use – truly magnificent!

Visually, the SHMC plug-in is a masterpiece that looks almost identical to its hardware counterpart, although this also means that the plug-in’s window is rather large for a compressor (the hardware SHMC is a chunky beast after all). Sonically, things are equally impressive, with the plug-in coming exceptionally close to matching the sound of the original hardware (digital models can never quite capture the sound of electrical signals flying around hot electronic components!). It’s not the cheapest compression plug-in you’ll encounter, but it’s a snip compared to the $8,000-or-so you’d pay for the actual hardware – and worth every penny.

There are various types of compressor to choose from – broadband, multi-band, optical, VCA and so on. Many of these are intended for specific uses and you probably have favourites that you come back to time and again when performing certain tasks. If you add the Shadow Hills Mastering Compressor to your plug-in library, though, it’s likely to replace many of those favourites – it really is that good. It would be possible to mimic the SHMC’s two-stage compression using separate optical and VCA compressors, and if you have good examples of these, then it’s worth trying. But as well as being clumsy to work with, you wouldn’t get the subtle character variability that the SHMC’s switchable transformer provides. So, no matter what type of audio work you do, it’s definitely worth checking out this processor. 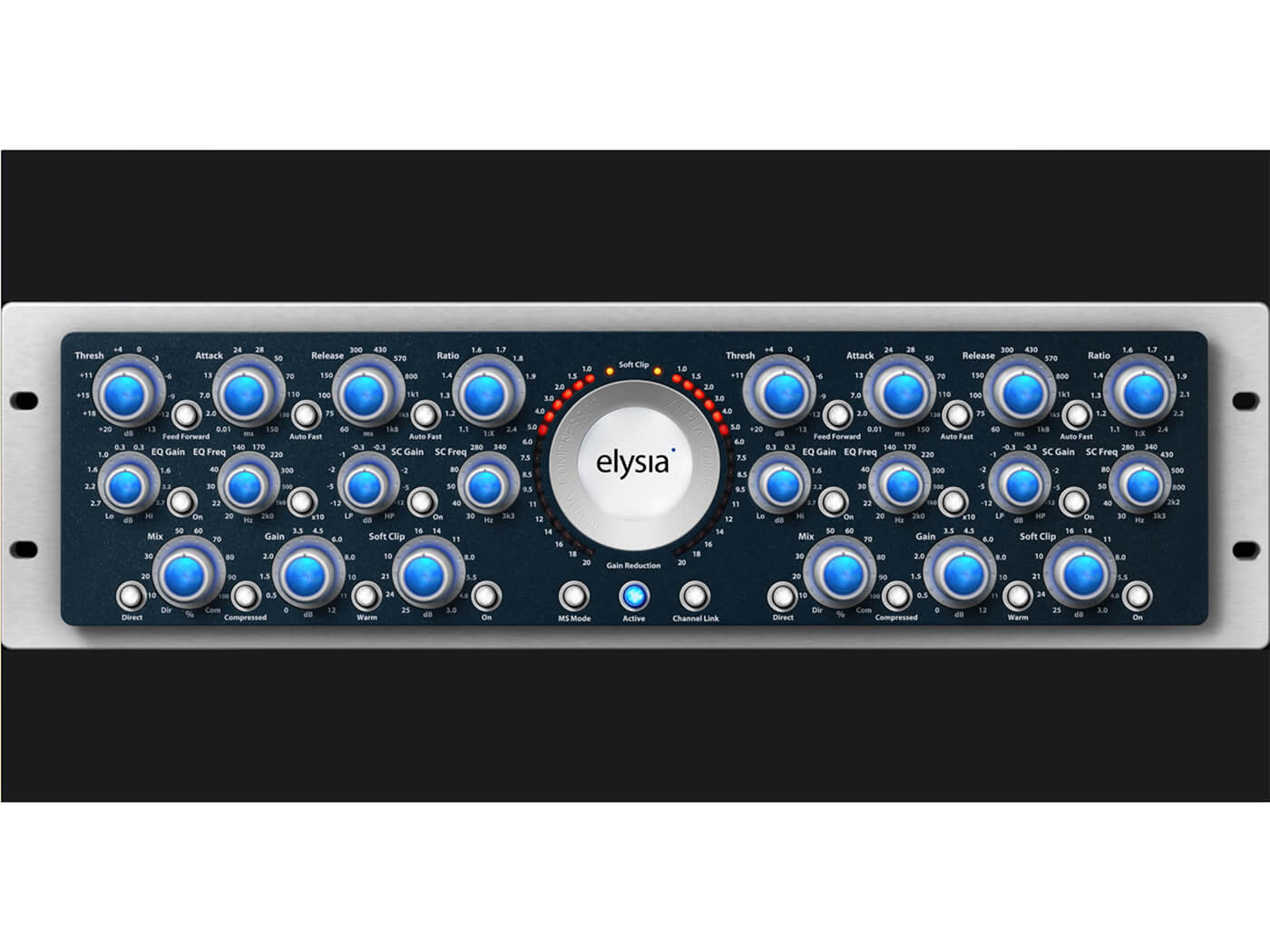 The Elysia Alpha Compressor plug-in is modelled on the high-end ($10,000+!) hardware compressor of the same name. The processor operates in the mid-side domain, making it perfect for its intended use as a mastering compressor. This does, however, render it fairly unsuitable for use as a channel or instrument compressor. 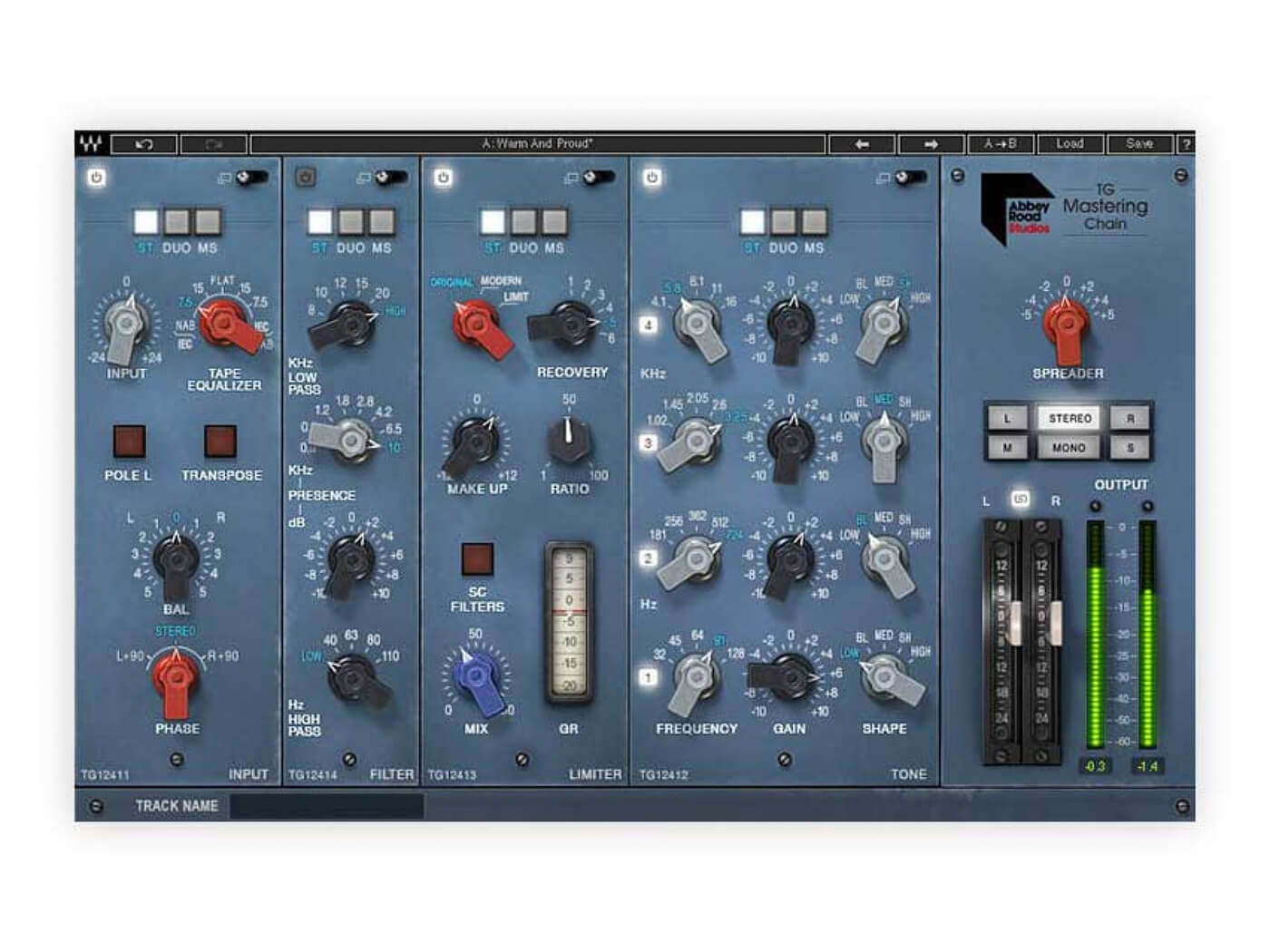 The Abbey Road Mastering Chain is modelled on the EMI TG12410 Transfer Console that has graced all of Abbey Road’s mastering suites since the early 70s. It provides an entire mastering chain comprising input conditioning, EQ, dynamics and stereo adjustment and each module can operate in stereo, dual mono or mid-side configuration.