Brainworx claims that its new limiter is the best there is. It’s an extraordinary claim, and so the evidence will also need to be extraordinary. 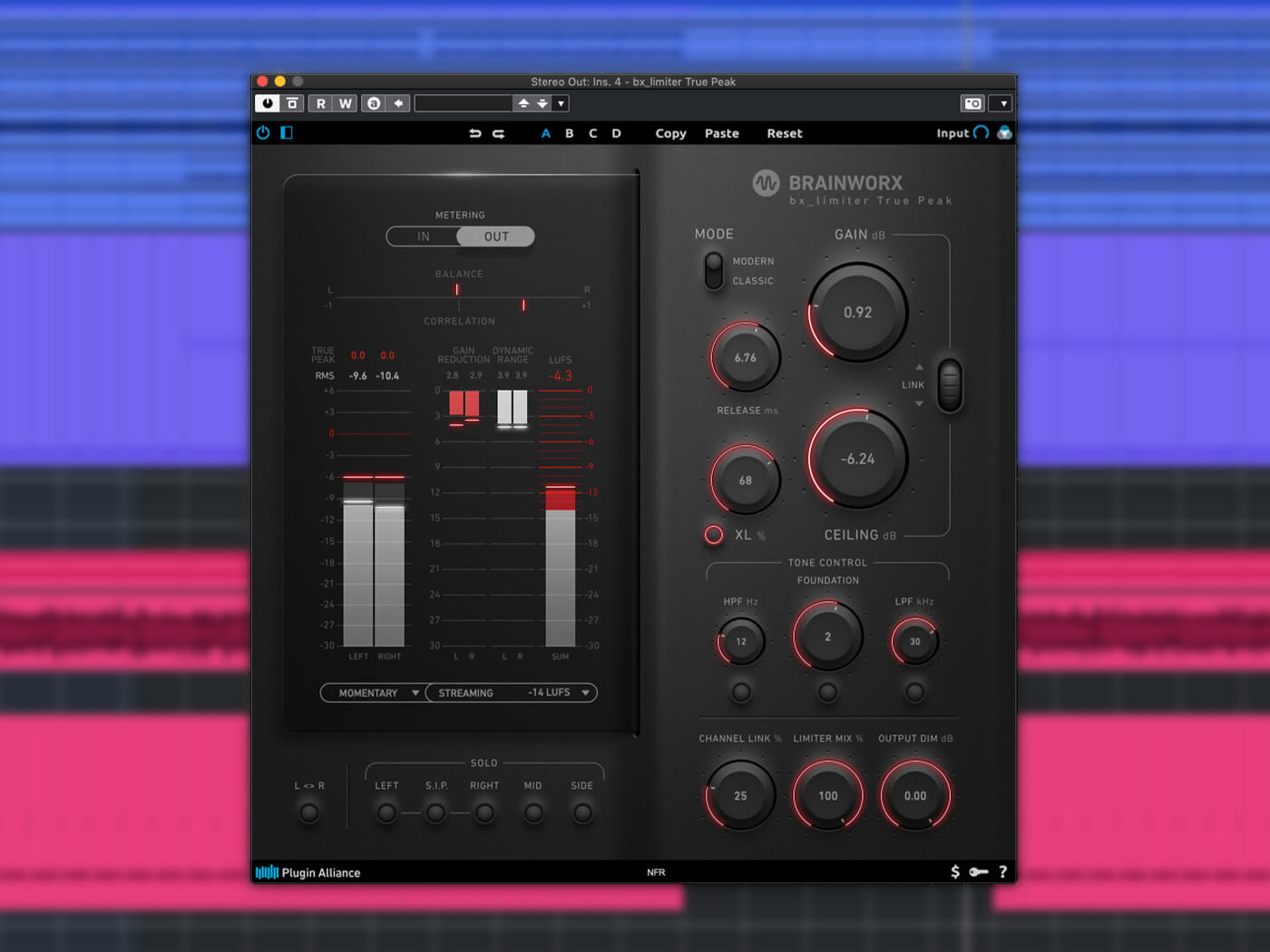 Many people approach limiters as something of an afterthought, a bantamweight pugilist with the enthusiasm and accuracy to floor those few peaks that are just too fast to be stopped by the lumbering, heavyweight haymakers of a compressor. Over recent years limiters have been getting more powerful and capable, leveraging the speed of modern CPUs to run ever-more-complex processing algorithms without slowing down the dynamics-controlling fun and frolics. German developers Brainworx already know a thing-or-two about this sort of thing with their bx_limiter plug-in a staple workhorse in many effects racks. With their fully reimagined bx_limiter True Peak, the company aims to raise the bar higher – higher, it claims, than any other limiter plug-in on the market.

Dancing on the ceiling

The first thing to strike you about True Peak is the design – although quite chunky in proportions, the interface looks expensive and tactile. The panel is split into two halves, with all of the controls laid out on the right, while on the left is a comprehensive metering and monitoring section. You can hide the metering panel when it isn’t needed, freeing up some screen space and graphics processing cycles. You can also choose the colour scheme that the plug-in will use – the background and knobs are always a pleasing matt charcoal grey, but you can choose from a selection of nine colours for the meters and markers. You can’t define a custom colour scheme, though, which feels like a bit of a missed trick.

Surprisingly, the plug-in doesn’t have an attack time control and instead allows you to choose between Classic and Modern modes, which equate to very fast attack and, well, warp speed attack, respectively. Release times can be dialled in, and are similarly zippy, with a maximum of 1s and a minimum of 0.01ms, or 1/100,000th of a second, which is insanely fast – more than 5x faster, for example, than Sonnox’s excellent Oxford Limiter. Of course, the idea behind such super-fast attack and release times is that they are way (way way!) too fast for the human ear to detect, so when being used to catch intermittent peaks, True Peak can be 100% sonically transparent.

The controls for input gain and limiter threshold – or “ceiling”, as Brainworx refers to it – can be set via their dials in the usual way, but they are also tied together with a thumbwheel-style Link control. This reduces the ceiling level while increasing the input gain by the same amount, which proves to be a very effective way to find the right balance between the two controls. The link is proportional, so it retains any initial difference between the two parameters.

There’s also an input level trim control tucked away on the plug-in window’s toolbar; the idea being that you can use it to tailor an input signal without having to adjust any of the plug-in’s other controls, as doing so would likely change the delicate balances between them. And talking of delicate balances, True Peak even provides control over the stereo width of the internal sidechain/key signal so that, at one extreme, the left and right signals are independently compressed, while at the other, both channels are compressed by the same aggregate amount.

It’s no secret that True Peak has been designed primarily for use in mastering. Still, like any good processor, it can be used in several scenarios. It’ll do fine work with drum submixes, basses and electric guitars, and sounds fantastic on acoustic guitars. It will happily work with any source that needs a bit more punch and substance in a mix. What really sets True Peak up as a mastering limiter, then, is its metering section.

There’s a combined peak and RMS meter, channel-specific gain reduction and dynamic range meters, stereo balance and correlation meters, and a loudness meter that can switch between momentary and short-term loudness measurements. The loudness meter also has different loudness targets to choose from, and these determine the point at which the loudness meter and scale markings go into the red (or whatever colour you’ve chosen). For example, the Streaming target sets the “over” point at -14 LUFS, whereas the EU Broadcast target sets it at -23 LUFS.

True Peak also provides a set of monitoring options that allow you to isolate left, right, mid or side channels, and to flip the stereo signal. And as a final gilding of the lily, the meters (with the exception of gain reduction) can be switched between showing input or output readings. We don’t see how Brainworx could have got this metering section more right – it’s perfect!

True Peak’s blend of controls is intuitive and easy to understand, despite the under-the-hood complexity. Coupled with the exquisite visual feedback, this makes the plug-in an absolute dream to work with. It handles the traditional peak-catching role of a limiter with consummate ease and complete transparency, but when you crank things up, and work with the tone and XL controls, True Peak can become a real monster! It’s literally impossible to push its output beyond 0dB, and that’s a true reconstructed 0dB that takes inter-sample clipping into account. Naturally, the harder you push things the more they break up and distort, and True Peak can go a surprisingly long way before crossing the line between pleasing dirtiness and complete signal breakdown. But when sticking to more sensible settings, the amount of thickening, fattening and punchiness True Peak can conjure up is hugely satisfying. With some source material, it can even fulfil the mastering role traditionally played by a multiband compressor.

At $299 (£215 / €350) True Peak is undoubtedly a pricey proposition, especially for a limiter, but this is a serious piece of kit, almost as attractive as it is effective, and able to fulfil most of your limiting needs (not to mention some of your compression ones too). So while Brainworx’ claim to have created “the last word in limiting” may be a bit on the braggadocious side, we can’t find any real reason to disagree.