Convention has it that working with FM synths sits somewhere between difficult and impossible but, in true Gallic style, BLEASS have no interest in following convention. 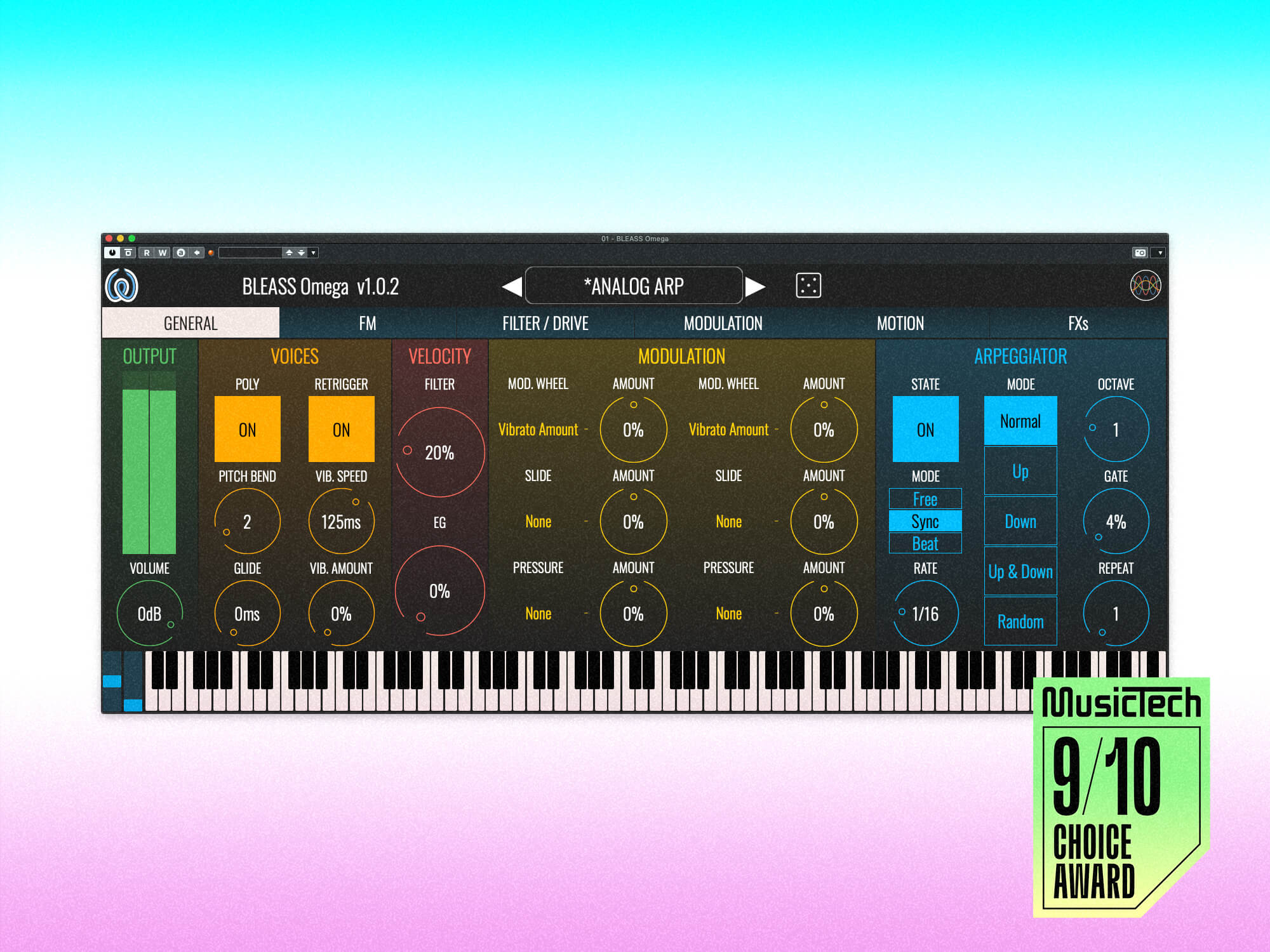 
FM synthesis is arguably the most versatile and expressive form of synthesis ever. But it has always suffered from having a massive fly in the middle of its luxuriant sonic ointment: FM programming is notoriously arcane and obtuse and about as far from intuitive as it’s possible to get. The modern world of software-based synths has seen a reduction in FM’s fly-to-ointment ratio, but even so, we’ve seldom found ourselves using the phrase “a straightforward FM synth”. Until now, that is, because before us is BLEASS Omega, an FM synth that’s – finally – easy to use.

From Alpha to Omega

Omega has a lot in common with BLEASS stablemates Alpha and SampleWiz 2. It features the same tabbed user interface and shares various modules and components, such as the Modulation section (two LFOs plus an additional envelope generator) and BLEASS’ signature Motion Sequencer.

Where Omega differs is, of course, in its sound engine, which is a four-operator FM affair with a choice of 11 algorithms (“operator” is FM-speak for an oscillator; “algorithm” is FM-speak for how operators are interconnected). Our attention is immediately grabbed by the way BLEASS has crafted Omega’s interface so that all of the FM controls appear on a single, clear, easy-to-read screen. All global settings, such as master tuning and feedback (all algorithms have the facility to feed the fourth operator back on itself), sit alongside individual controls and amp envelopes for each operator. This entices you to dive in and start experimenting, which naturally helps you gain a more intuitive understanding of how FM works.

Traditionally, FM operators only produce sine waves, and the more operators an FM synth has, the more versatile it becomes. The classic DX7 had six such operators, but Yamaha dropped this to four with the later DX21 and TX81Z models. However, the operators in these synths could produce alternative waveforms, a feature that largely balanced out the loss of two operators.

In Omega’s case, the four operators only produce sine waves, which should limit the synth’s versatility. But Omega has a trick up its sleeve that more than makes up for this: its FM sound generation engine is followed by a waveshaper and filter. The waveshaper adds analogue-style overdrive and distortion, and the filter is BLEASS’ standard multi-mode affair with low-pass, high-pass, band-pass, and notch filtering. The result is a devastatingly effective blend of the clean, pure, detailed tones of FM, with the warm, growling, resonant characteristics of subtractive analogue.

Omega’s combination of digital and analogue sensibilities, which is on full display in the included library of nearly 200 patches, gives the instrument a voice and character quite unlike any other synth. All of the classic FM tones are here – electric pianos, metallic bells, crystalline pads  – but so are classic subtractive tones and lots in between. The most impressive thing about Omega is BLEASS’ sublime FM programming interface that dispels so much of FM’s inherent complexity that what remains is both intuitive and fun to work with – quite an achievement for any FM synth!