A staple of the modern guitarist’s digital tool kit, NI’s Guitar Rig has been given a new lease of life with its latest update. Let’s unpack it. 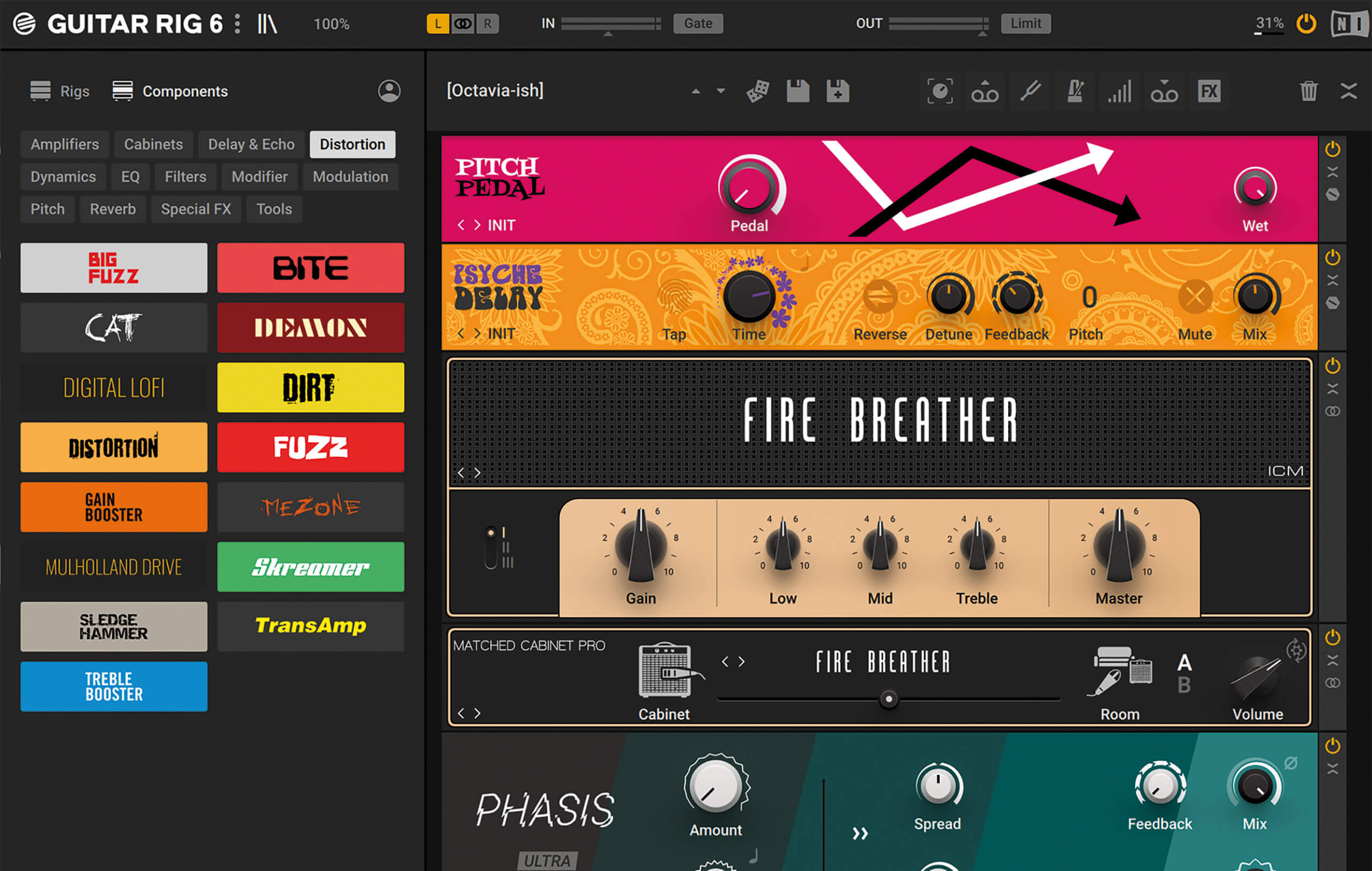 Guitar Rig Pro is a legendary processing workstation. Like many of the hardware counterparts from decades before its existence, Native Instruments’ Guitar Rig has slowly become a staple of software-based multi-effects processing. At its core, the program is an effective emulator of classic tones from amps, pedals and cabinets. But it has also become part of a larger tool kit for adding character and tone to audio.

Guitar Rig’s presets have always been a reliable way to grant your instrumentation a more specific place in your mix. In doing so, it has also become a go-to for many audio-shaping tasks that stretch beyond its remit as a guitar-based platform, even if the program’s major strength remains the creative processing of guitar sounds.

Similar to Reason and Native Instruments’ Kontakt, Guitar Rig Pro operates via a stacked drag-and-drop system meant to simulate a gear rack. There are advantages and weaknesses to this setup – for all the quick and easy visuals, it can be tough to navigate the audio routing system.

With Guitar Rig 6 Pro, however, comes a modern new look that is cleaner less gimmicky. 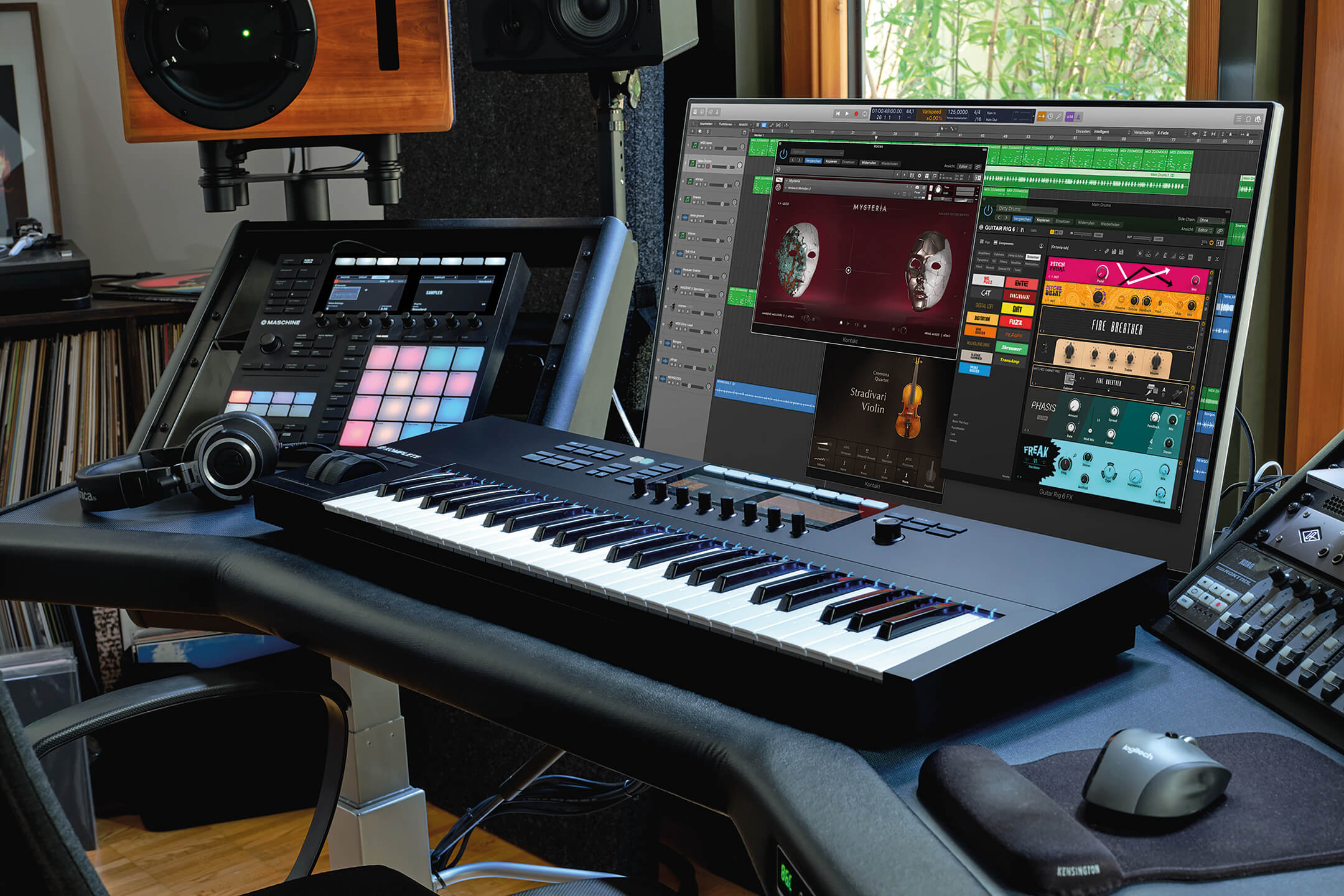 Shhh, this is a library

The new library interface is another solid addition, making for an all-round better workflow for the eyes and the brain. One of the reasons we like the workflow of Native Instruments’ Maschine platform so much is that it encourages navigation and exploration throughout its library. Now, we can say the same for Guitar Rig.

The previous version of the platform had basic presets and individual selectable components, but now you can build your rig from the ground up according to what kind of sound you want to process, and narrow these parameters further by selecting from tabs that categorise the nature of the sounds you want to hear. Using this new and more intuitive method, you’ll get better results much quicker than you would’ve with Guitar Rig 5.

Guitar Rig’s entire window can now be resized globally and on the fly to best suit your DAW too. Without realising it, Native Instruments has once again revealed one of the constraints of its prior version – it’s only by improving things that you recognise the faults of programs past. With Guitar Rig 6 Pro, we’re able to resize the display to have it properly conform to our review computer’s true resolution.

Guitar Rig 6 Pro makes use of ICM, a new emulation of the circuit behaviour within specific hardware and broadly referred to by NI as based on machine learning. There are three new amps on offer via this ICM-based update: Bass Invader, based on a 1980s-1990s bass amp; Chicago, based on 1950s fuzz effects; and Fire Breather, based on modern British blues and metal legacy tones. The forward-thinking idea behind the ICM technology is that it will react to user requests. This way, what it learns in the future and what it is able to recreate from hardware will be shaped by users, whose decisions will be factored into the regular software-update cycle. These first three ICM amps sound impressive and authentic, and demonstrate plenty of playing dynamics.

Though not ICM-based, you’ll also find Rammfire’s plucky distortion amp and cab setup included in Guitar Rig 6. This is one of many new bundled additions to the package. The new Matched Cabinet Pro offers IR-based room responses to the Matched Cabinet amp and cabinet combinations that Guitar Rig Pro users will already be used to too, granting a remarkable sense of room and amp interaction for smoothing sounds.

One issue we had with past editions of Guitar Rig is how difficult it could be to manage parameters across large racks with many components. With a vertically scrolling interface, it only took five large components before it became difficult to keep tabs on essential sound-shaping parameters. Hoping to solve this minor but persistently frustrating issue, Native Instruments has introduced a macro system, which means that your panels can remain static in the rack as you scroll and make modifications. It allows for a maximum of eight parameter assignments per macro, with a total of 16 macros making this a powerful tool to better manage your workflow and automation duties. You can set custom minimum and maximum values per assignment too, making this an expressive new system. 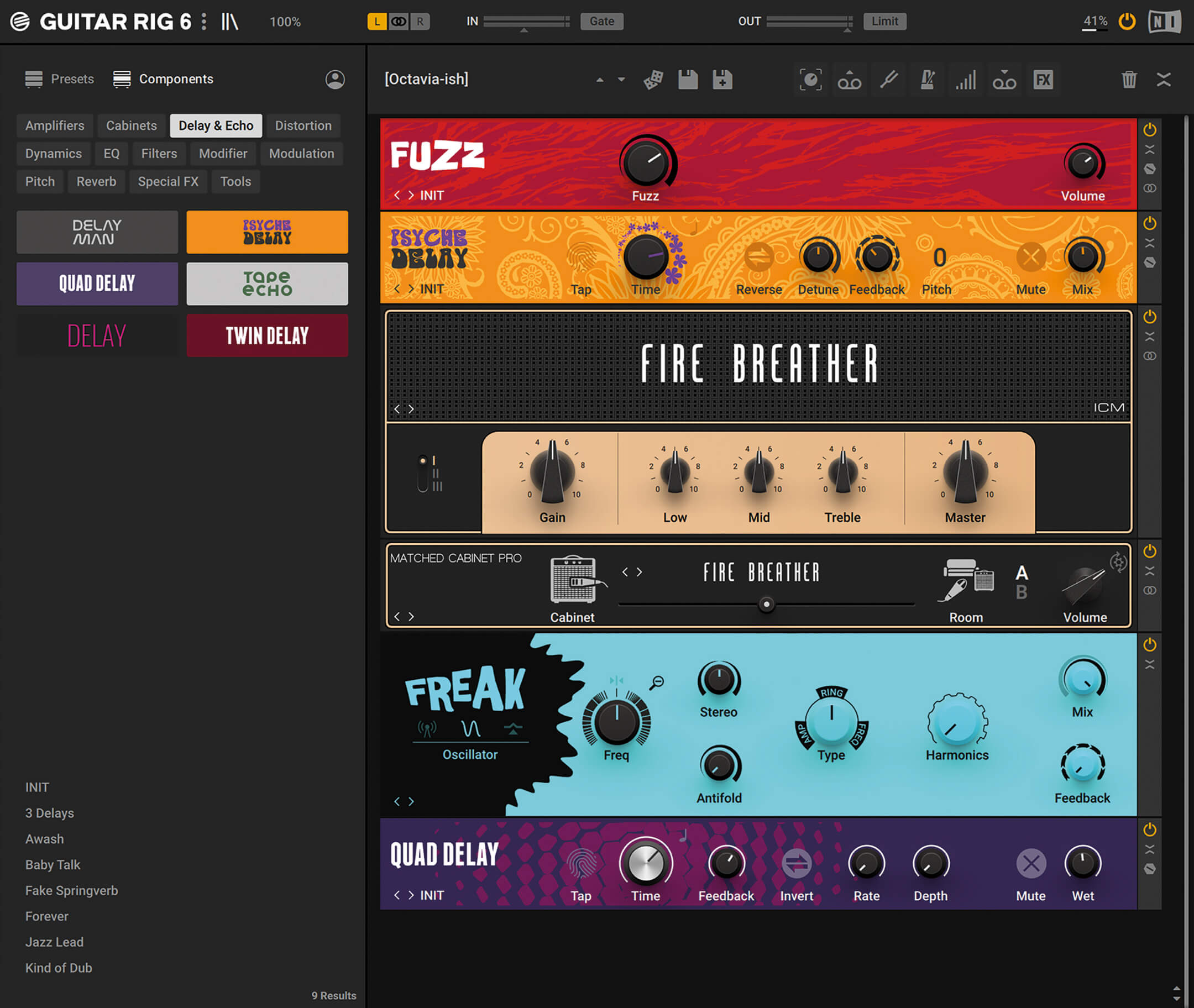 Down in the dirt

Covering digital-sound degradation with many variables, the new sample-rate and bit-reduction tool Bite functions as a superb signal-destroyer for sound effects. But it can also be used in moderation to add dynamic background noises to signals to increase their presence. The soft-clipping saturation and both input and output filters make dialling in and fine-tuning tones quick and easy, and the presets are ideal for instant old-school fidelity too.

Dirt is a double distortion unit with three clipping types and internal parallel/series routing options. The unit can take you from subtle warming effects to asymmetrical shaping and everything in between, and it boasts a full-range frequency response that means it functions well on all sorts of sound sources. Once again, the robust range of presets allows you to get going quickly and tap into the sonics you require.

Alongside Dirt, Bite and the software’s many other guitar-centric effects, Guitar Rig 6 Pro now comes bundled with studio processors that had previously been exclusive to Komplete.

While these welcome additions to Guitar Rig 6 are not technically new products, they will feel new to many, and they consist of useful tools for those who haven’t been able or willing to invest in NI’s Komplete packages.

The dynamics processing now covers a who’s who (or should that be what’s what) of classic compression, making available the Komplete package’s VC 160, VC 2A and VC 76 compressors, which can be fed by the external sidechain input capability. Using the well-regarded attack and release stages of the vintage hardware that these emulate, you can achieve musical and dynamic smoothing of your levels or you could just outright slam your signal path. There are more vintage tones in the form of the RC 24 and RC 48, based around a culturally significant high-end reverb from the 1980s. 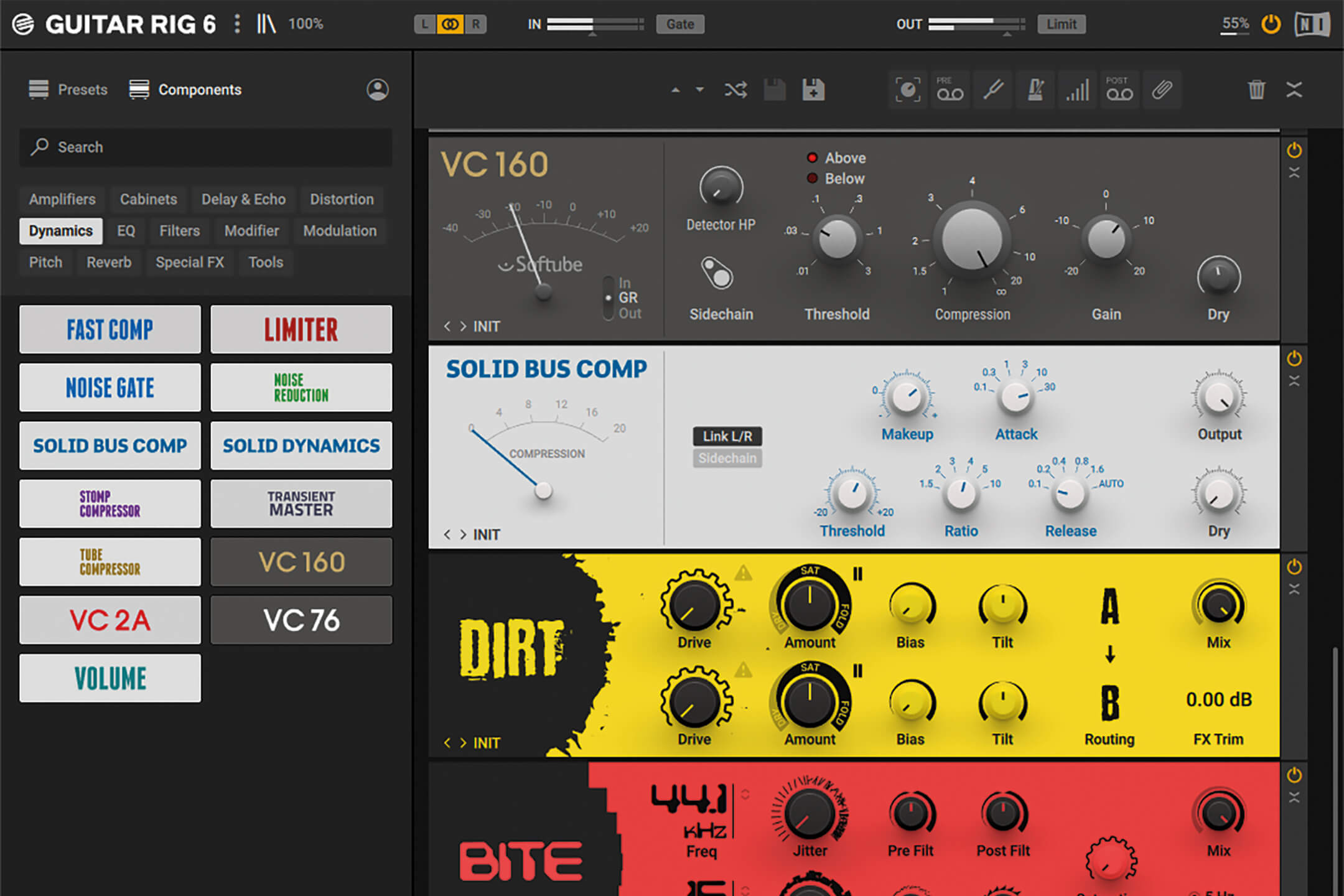 Vintage in fidelity but rich and musical in tone for classic-sounding depth on tap, Reflektor is an IR-based convolution reverb that brings a new level of space to Guitar Rig 6. Impressively, it does so with no audible pops and clicks as you move the parameters around while it recalculates your new IR. There are new reverbs too. With Grounded, Airy and Cosmic modes, Raum caters for a variety of spaces for lush yet synthetic space design. Freeze functions let you generate sonic beds and twist them with the size parameter for tape-stop-like warping, too.

With other new additions that include Solid EQ, Bus Comp and Solid Dynamics for more classic processing, plus Traktor Pro processors, and effects such as Choral, Flair, Freak and Phasis, you’ve got yourself quite the new set of colours to paint with. 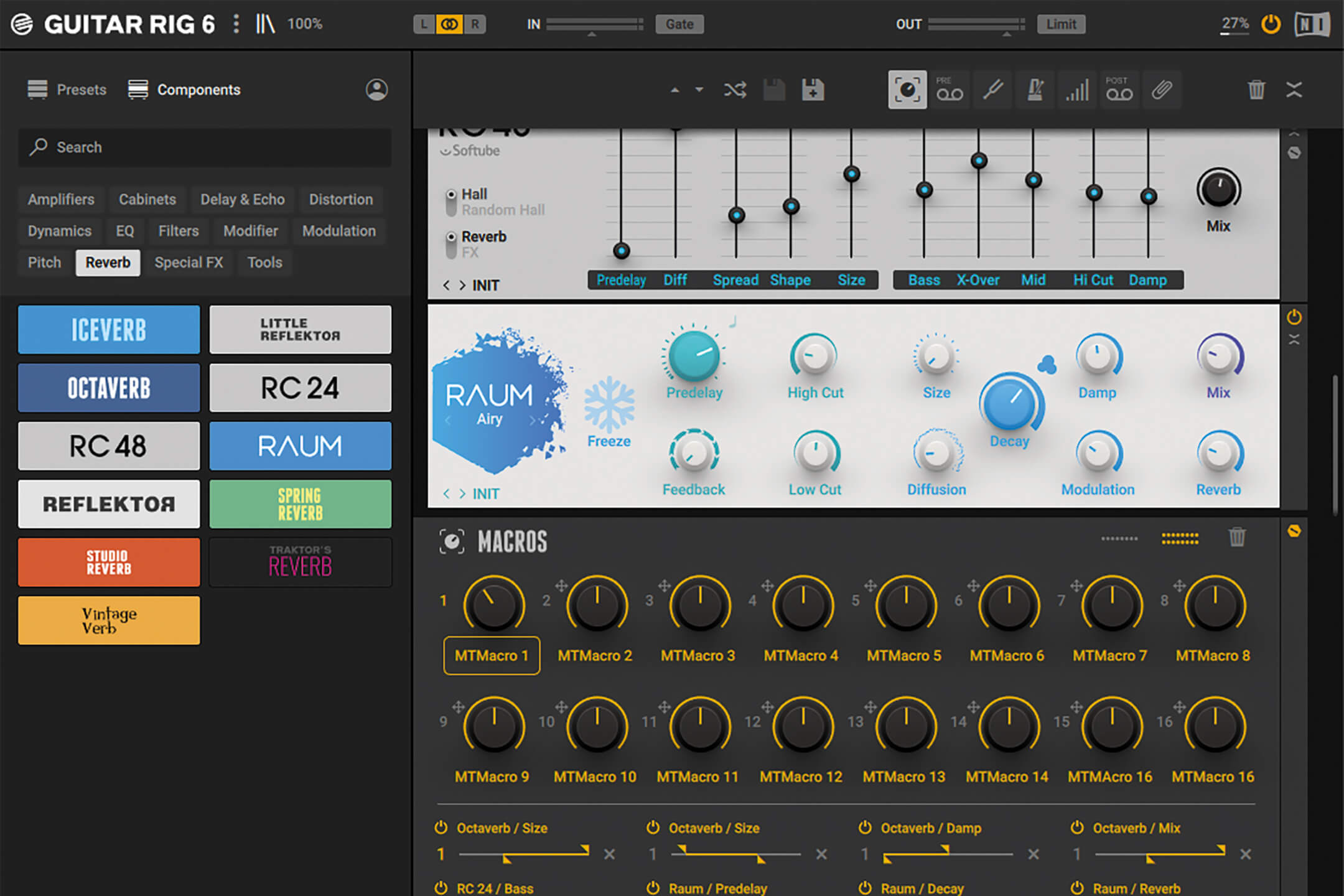 If you already have Guitar Rig Pro, this upgrade should be a no-brainer. For newcomers, the level of sound-design and shaping control should be attractive compared to the workflows and more traditional approaches of many competing platforms. With the richer sonic palette provided by the new additions coupled with the novel workflow improvements, this package should be a temping option for its price too.

If you already own Komplete 12, you’ll find that many of the ‘new’ Guitar Rig 6 Pro devices are really just repackaged old devices, presented in an improved form. Upgrading to Komplete 13 isn’t cheap but it comes with Guitar Rig 6. Those who just want guitar tones may want to demo other options before settling on this.

This plug-in offers superb-sounding virtual guitar processing. It doesn’t have the envelope or modulator actions of Guitar Rig 6 but it does boast a simpler layout and an easy-to-use signal-routing interface.

The Guitar Match system captures the character of your individual pickups and tonality across different neck positions. Once this process is complete, you can achieve usable approximations of other guitar types.