Will this intriguing new replication of the revered 232P MK II mastering equaliser add the necessary phat-ness to your tracks, or will it leave us hoping for better? 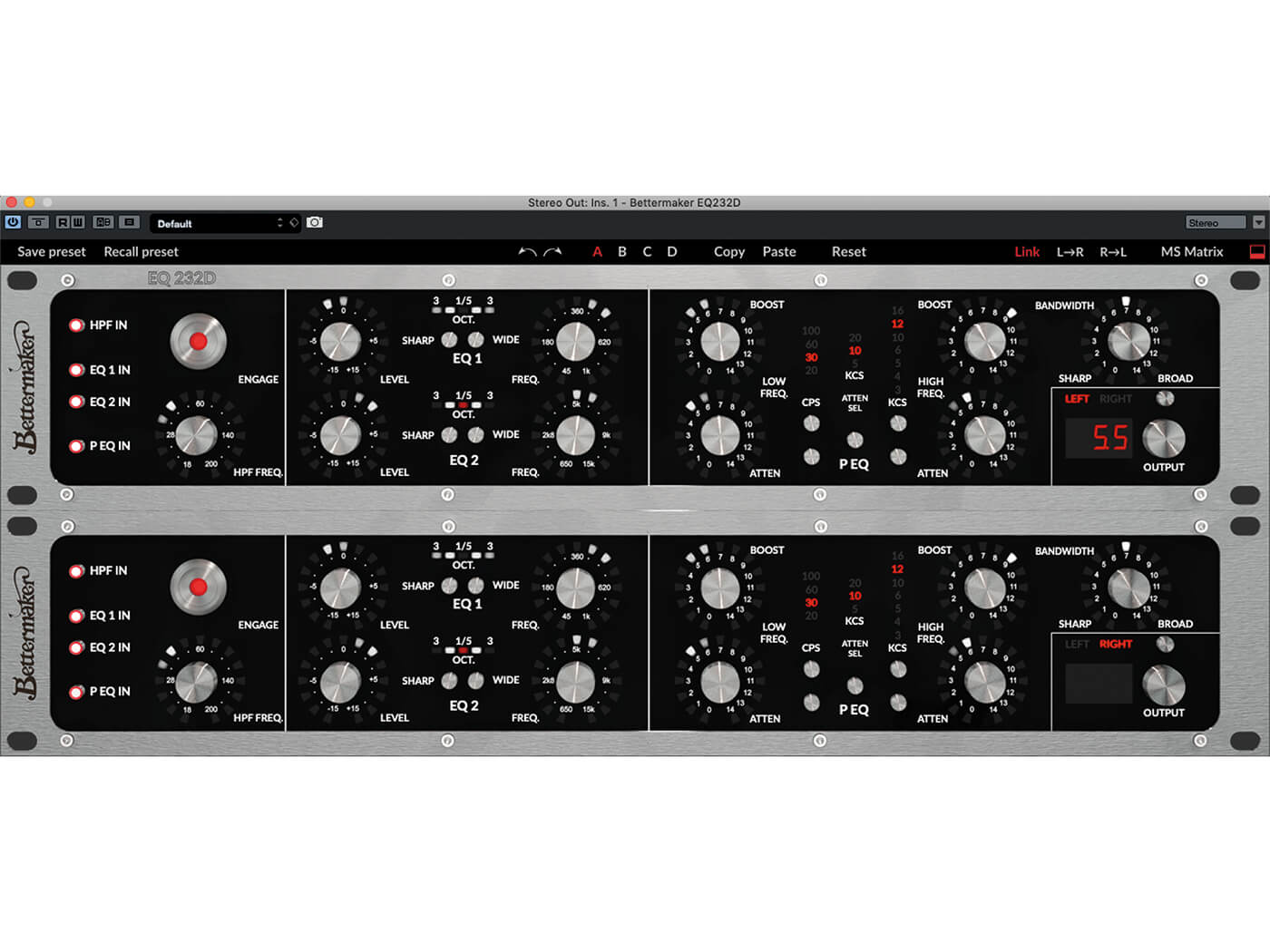 Having grown from the Addicted to Music studio in Warsaw, Bettermaker specialises in producing modern studio processors that combine the quality and character of high-end analogue circuitry with the convenience of digital control. Not only does this mean that its current crop of hardware sports sleek and attractive colour touch-screen displays, it also allows the analogue signal processing provided by the hardware to be controlled via a DAW plug-in, so that it feels much like using any other plug-in processor.

One of Bettermaker’s most popular products is the 232P MkII mastering equaliser, a processor that blends classic and modern in a remarkably effective way. The classic comes in the form of a two-band Pultec-style EQ filter that allows both attenuation and boost around the same (or similar) frequencies, whilst the modernity comes from the two semi-parametric EQ bands and the crystal-clear clarity delivered by the over-specified analogue signal path. These features give the 232P MkII the ability to fatten and sweeten a mix or part with the smooth yet complex curves of an old-school Pultec EQ but without the fuzzy warmth you would get if using an actual Pultec (or model of one).

Where this combination really comes into its own is when used on electronic dance, hip-hop and R&B music, which has lead to the 232P becoming something of a legend amongst producers of these genres. Sadly, Bettermaker no longer manufacture the 232P MkII hardware. But happily, they have painstakingly modelled that hardware and released the results as the Bettermaker EQ232D plugin for VST, AU and AAX-Native hosts.

In terms of appearance there’s practically no difference between the EQ232D’s GUI and the original hardware’s control panel although, unlike the hardware, the plug-in can show an entire panel for each of the processor’s two channels. Those channels can be configured for mono, stereo, dual-mono, or mid-side operation. Also unlike the hardware, which allows A and B settings to be dialled-in and compared, the EQ232D plug-in provides four comparison slots, and the ability to quickly copy-and-paste settings between them.

The first processing stage in the EQ232D is a high-pass filter that can be swept from 18Hz to 200Hz. You can bypass the stage altogether, as you can the next two stages, EQ1 and EQ2. These are semi-parametric affairs that allow you to step from a sharp 1/5 octave bandwidth to a wide 3 octave bandwidth. EQ1 is sweepable between 45Hz and 1kHz and EQ2 between 650Hz and 15kHz, with 15dB of attenuation or boost available to both.

The third and final stage is the so-called P-Filter EQ, no guesses for figuring out what the ‘P’ stands for here. As you may know, this style of EQ is characterised by its ability to apply attenuation and boost simultaneously within a single shelving EQ band. On the surface this may sound somewhat pointless, but what in fact happens is that the boost and attenuation curves interact to create a much more complex EQ curve, which may require three or more bands to mimic with a more conventional combination of shelving and parametric bands. More to the point, the results of the Pultec method tend to have a smooth, natural-sounding character that tends to work very well for mix processing and mastering duties.

With the EQ232D’s P-Filter EQ, then, the low band’s frequency can be switched between 20Hz, 30Hz, 60Hz and 100Hz, with 14dB of boost and attenuation available. In the high band, boost and attenuation centre on independent corner frequencies, the former having a choice of 7 frequencies ranging from 3kHz to 16kHz, and the latter operating at 5kHz, 10kHz or 20kHz. The bandwidth of the high band can be swept from sharp to broad, and this also has an impact on the maximum amount of boost or attenuation that will be applied (a broader bandwidth will result in reduced boost and/or attenuation). 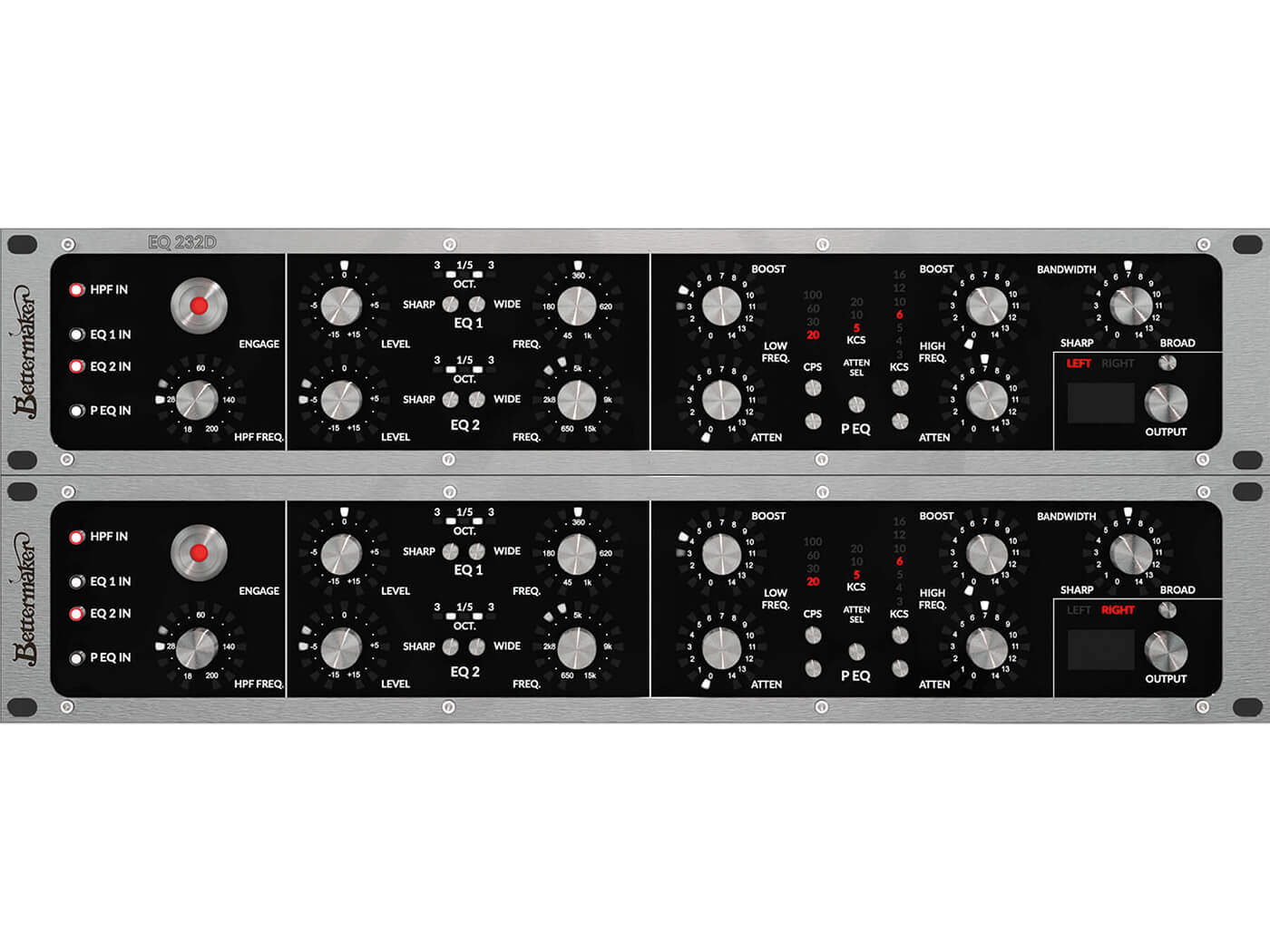 Modern DAW-based EQs often take advantage of their graphically-rich operating environment by drawing accurate EQ curves, and may even include realtime spectrum analysis that lets you see the results of your EQ work. These graphics can be useful, especially when performing correctional EQ or needing high precision for some other reason. But EQ-ing in the studio should be judged by your ears not your eyes, and by hearing what works rather than dialling in values you think may work. This is one of the things that makes Pultec-style EQs so popular. They encourage you to experiment, and pay you back with immediate, musical results.

EQ232D’s P-Filter EQ delivers this same satisfying experience, whilst the addition of the high-pass filter and the two semi-parametric bands adds a greater degree of precision and flexibility to proceedings. If you’re used to Pultec EQs then what really surprises with EQ232D is the clarity of the results, and how well the lack of classic-analogue fuzz works when used on contemporary electronic music. On the flip side, this cleanness doesn’t tend to work so well with things like guitar-centric rock or indie styles, where a bit of classic analogue warmth can do wonders for tying together the often complex mid-range frequencies inherent in the style.

Bettermaker calls the EQ232D a mastering processor, and for good reason. It can turn its hand to any part you care to use it on, but it comes into its own when processing signals with a wide frequency range such as full mixes, drum or synth submixes, and that sort of thing. The mid-side processing mode lends itself in particular to mastering, allowing you to strengthen and thicken the centre of the stereo image, whilst creating a sense of space and ‘air’ by enhancing higher frequencies in the side signal.

In keeping with the original 232P MkII hardware, there’s a certain special something about how all of these features and characteristics come together that makes this plug-in deliver astonishing results when used with styles such as hip-hop, R&B and EDM. The low-end processing delivers smooth and full-bodied results, whilst higher registers are given definition, cut and sparkle without becoming harsh or intense. These characteristics don’t work so well on all styles of music, but when it comes to contemporary electronic styles, where the original hardware built its reputation, it’s almost impossible not to make your music sound better with the Bettermaker EQ232D! 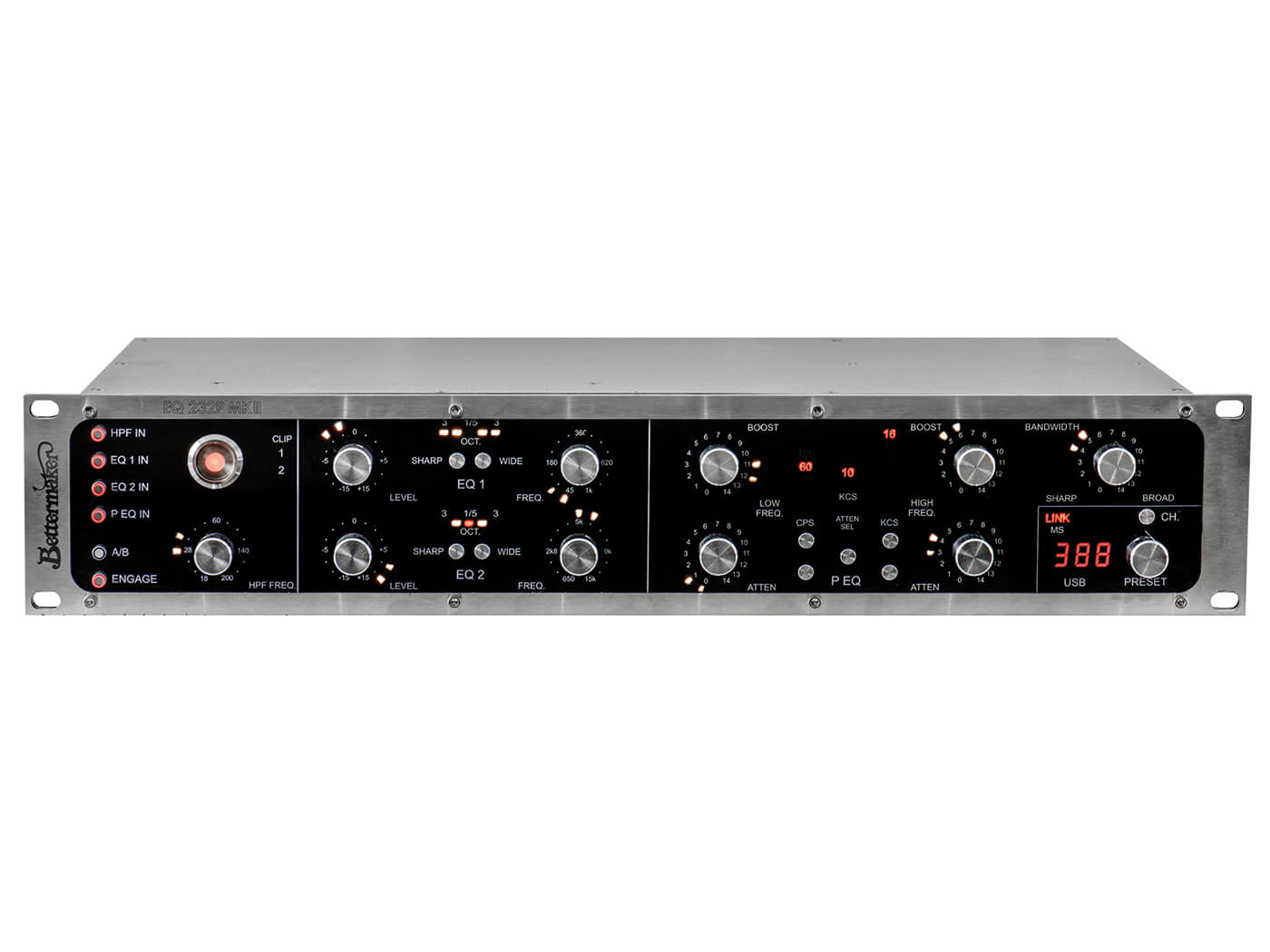 EQ-ing can be a very subjective thing. Outside of a few basic principles there are no hard-and-fast rules about how you should set up an EQ for any given situation or circumstance, and the best results will always come from relying on your ears. However, a criticism that can be levelled at many modern DAW-based EQs is that by allowing you to focus on graphics and numbers they can distract your focus from the actual sound. Not so with the Bettermaker EQ232D which, like many vintage EQs, positively encourages you to twiddle the knobs and listen to the results rather than think about numbers and look at graphs. If you think you may like such an approach then grab the demo to see and hear for yourself.

Softube’s highly regarded models of Tube-Tech’s boutique EQ hardware are here combined into a single processor. Pultec-style low and high bands, plus two mid peak bands and a single mid dip band results in warm, vintage-analogue style EQ ideal for use across a whole mix and during mastering.

The origins of this chameleon-like EQ plugin lie in the legendary Sony Oxford R-3 console. Different EQ types are modelled, from the clinical frequency control of an SSL E series, through the classic sound of Neve and SSL G series EQs, to wide gentle curves ideal for mastering.