Can this reverb and delay plug-in fulfil its ambitions to be the Roland Space Echo of the 21st century? 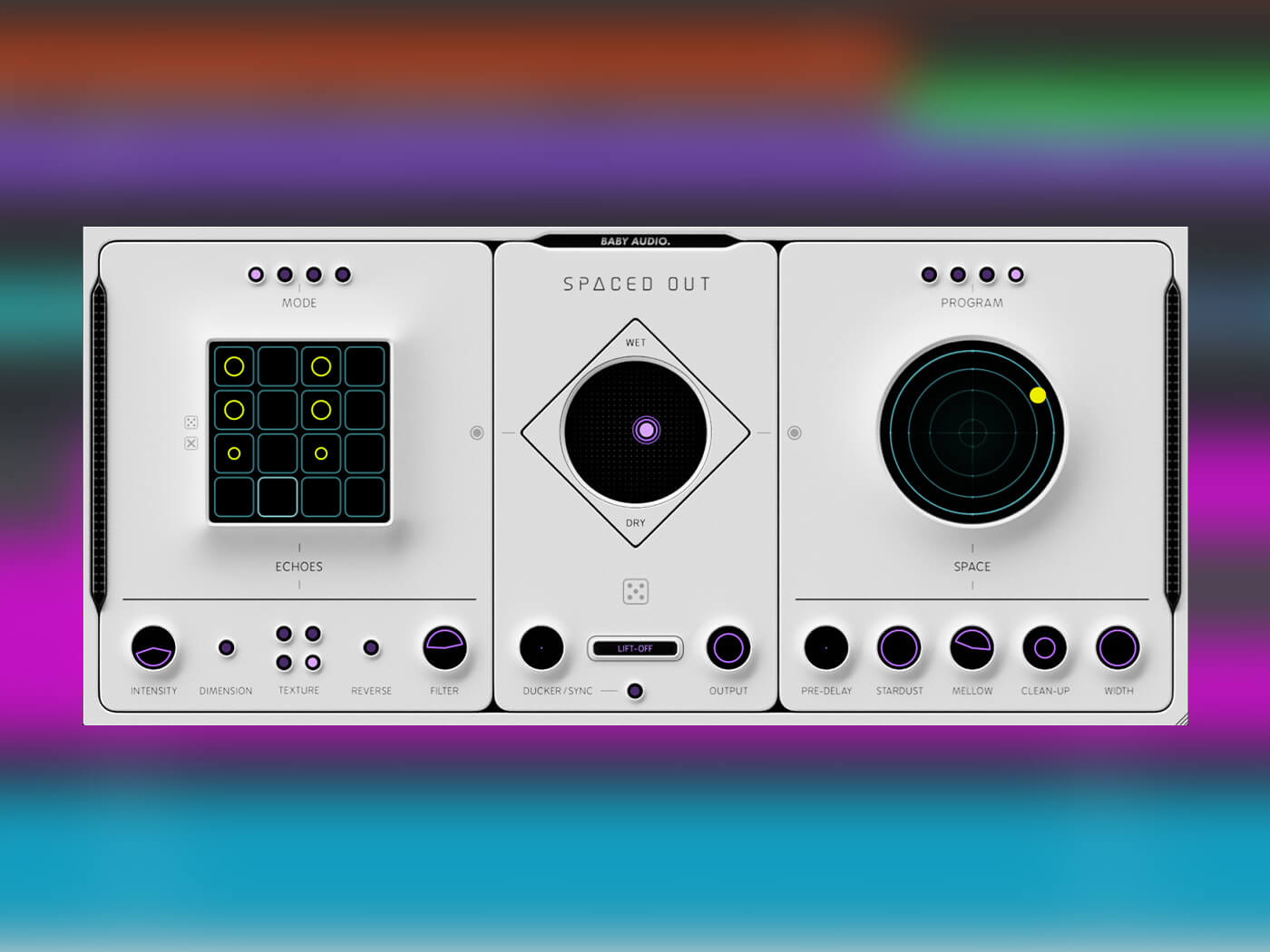 This slick, modern reworking of a classic recipe has its quirks but sounds fabulous with everything from a touch of slapback to huge, other-worldly spaces.

Despite nearing its 50th birthday, the Roland RE-201 Space Echo remains popular today thanks to its rich, warm, slightly unpredictable analogue sound. It has also inspired Danish plug-in developers Baby Audio to create Spaced Out, a 21st-century take on this most iconic of effects processors.

Spaced Out isn’t an emulation or copy of Roland’s classic. Still, it comprises the same essential ingredients: echo and reverb, and it packs these into an interface that’s slick, stylish and inviting.

The interface, which you can flip between light and dark modes, is laid out with the echo generator on the left, the reverb generator on the right, and a central master section dominated by a large, circular X/Y joystick-style controller. Moving this in the X-axis sets the balance between the two effects, while moving it in the Y-axis adjusts the plug-in’s overall wet/dry balance. The master section also hosts a so-called Lift Off effect that introduces a preset blend of mid-side compression and EQ, helping to bind together the echo and reverb while adding extra zing and sparkle to the results. There’s a ducker effect, too, that reduces the wet signal in response to incoming signals, ensuring they don’t get lost in the washy, shimmering reverbs. Alternatively, the ducker can be synced to your DAW to create rhythmic pumping effects.

Can you repeat that?

Spaced Out’s echo generator, or Echo Engine, centres around a 16-part pattern sequencer presented in a 4×4 grid. The sequencer synchronises to your DAW, and there’s a set of four mode buttons that determine the step length, with a choice of 1/16ths, 1/32ths, dotted 1/16ths and 1/16th triplets. You can define echo patterns by clicking cells. Clicking a cell cycles through options for loud and soft repeats (denoted by large and small circles) or no repeat at all.

When your DAW’s playing, each cell of the grid is highlighted sequentially to indicate the currently active step… or that’s the idea. Unfortunately, the highlighter does not take into account the step length, and so always moves across the grid once per bar, no matter what step size is selected.

Beneath the grid is a set of controls that allow you to hone the character of the Echo Engine’s sound. There are four basic modes with self-descriptive names – Clean, LoFi, Hazy and Wonky Tape – which determine the tonal character of the echoes and how their sound changes as they decay.

As well as a conventional feedback control, Spaced Out also offers a sustain setting that increases the intensity of echoes the more often they are repeated. This depends on the feedback setting, a fact reflected in the cunning way the two controls are combined into one circular graphical controller. Dragging the left side of the circle adjusts the sustain, while dragging the right side sets the feedback – visually, this looks like a pie with a slice taken out. The same control style operates for the echo generator’s low- and high-pass filter – it’s both elegant and intuitive!

The Echo Engine’s sound can be further modified by a Dimension button that switches the engine between mono, stereo and ultra-wide settings. There’s also a reverse button that reverses the repeated audio, but not the echo sequence itself.

The Space Engine’s large circular X/Y style controller controls the modulation type, modulation intensity and reverb time. Each modulation effect corresponds to a quadrant of the X/Y controller. For example, when the control point is in the upper-left quadrant, the Cosmic modulation effect will be applied. The reverb time and modulation intensity are then determined by a blend of how far from the centre the control point is, and how far around the quadrant it is. Although there is a certain logic to how this works in practice, and a readout of the current values is shown alongside the controller while you interact with it, the relationship between the control point and the resulting values is hard to discern. As a result, it’s not easy to get a feel for how a particular movement will affect the sound, although it almost always sounds good regardless.

There are the obligatory pre-delay and width controls and three controls labelled Stardust, Mellow and Clean-Up. The first of these adds a secret sauce that enhances high frequencies and extends their reverb time, resulting in lovely, shimmering, airy effects. Mellow is simply a high- and low -pass filter combined into one control (as-per the Echo Engine’s filter), and Clean-Up reduces the reverb’s density to give a lighter, thinner result.

Spaced Out comes with a bank of over 120 patches that show off the depth and range of the plug-in, from tight, echoey slapbacks to vast, rippling oceans of ‘verb that raise single notes into symphonies of time and space. And while the super-stylish interface begs to be played with, and gives instant – if not always predictable – results, there are various ‘generate’ buttons that dial in a bunch of semi-random settings for you.

The processor’s sound quality is impeccable too, but all this quality and inventiveness does come at quite a cost on your system resources, with our 12-core Xeon maxing out on only three instances. Still, this is a beautiful sounding and hugely creative reverb and echo processor that comes with a thoroughly reasonable price tag. If the classic Space Echo was invented today, this is probably what it would sound like!