This so-called ‘intelligent signal balancer’ is made to cut back the boom, mud, fizz and harshness from mixes, vocals and instruments. 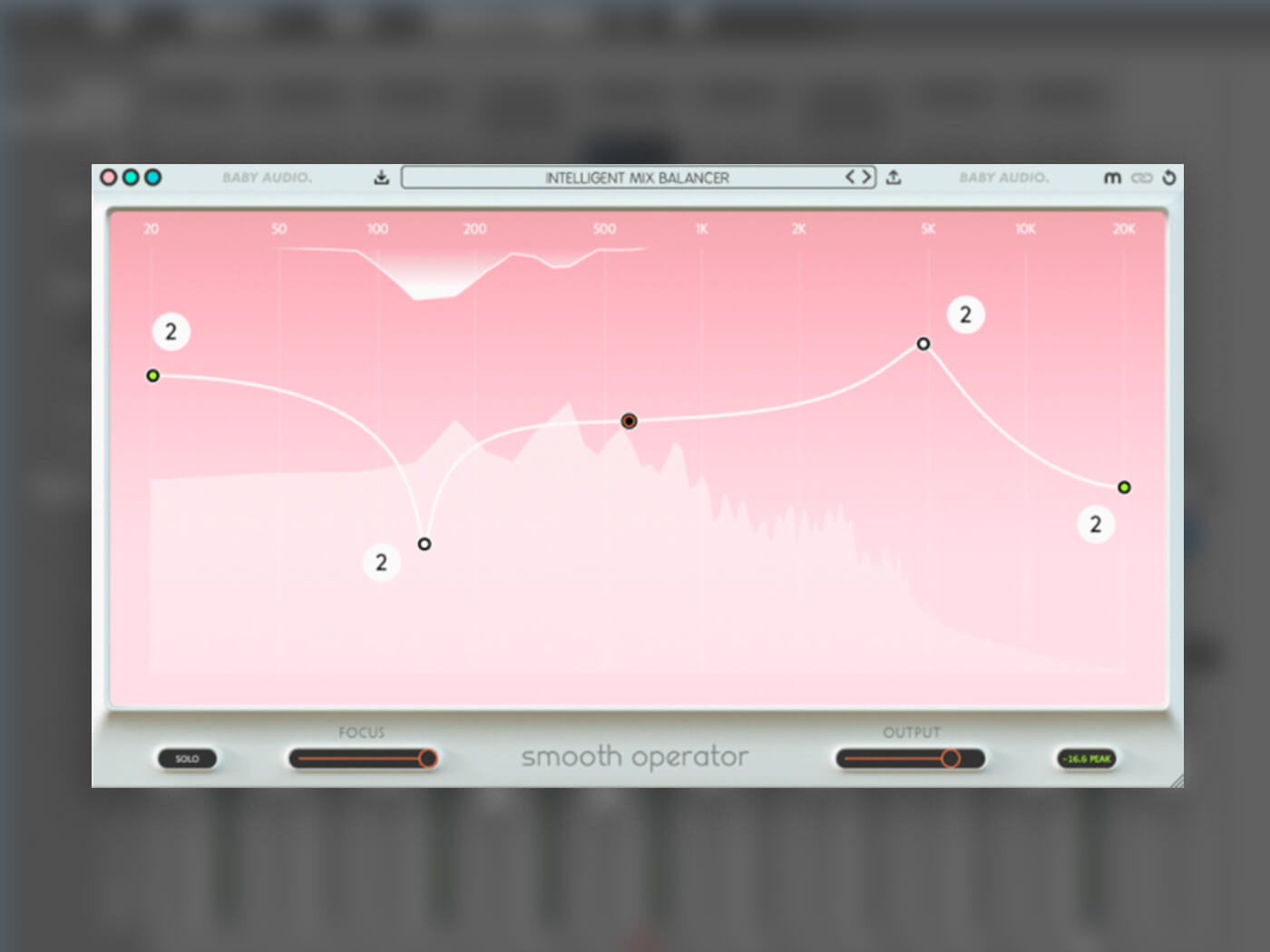 A deceptively powerful tool that can enhance within and across a mix. Highly effective and easy to use for shaping and lifting electronic and acoustic sources alike.

There are qualitative terms in music production that are synonymous with poor mixing. Boomy, muddy, fizzy, and harsh are just a few. And what they all have in common is an element of unwanted resonance. Enter, Baby Audio with Smooth Operator. This new plug-in brings simplicity to the complex task of dynamically reducing peaks across the frequency spectrum to curtail undesirable resonances and create more balanced audio signals.

The clutter-free UI keeps it smooth with a choice of baby pink, baby blue and mint colour schemes for the FFT spectrogram display, over which the plug-in’s frequency response curve can be shaped. The curve features four nodes, two anchored to either end of the spectrum and two floating in between, much like a 4-band EQ with two shelves and two parametric peaks. Between the peak nodes sits the threshold node, which defines the overall response. As you pull down the threshold, the reduction across the frequency spectrum is represented spectrographically coming down from above the output signal spectrogram. It’s an intuitive way of representing the plug-in’s processing.

Smooth Operator is neither a dynamic EQ nor a multi-band compressor, rather an FFT based algorithm that splits the audio into numerous bands to play spectral whack-a-mole. The focus slider effectively controls the independence of each band’s reduction, running from straight line unison at one end to a rippling, spiky independence at the other. An optimum smoothness is usually somewhere in between, which is a motif for this plug-in. A little goes a long way with Smooth Operator, and though it is tempting to use everywhere in big dollops, a subtle stroke of its sonic brush can enhance a mix or instrument without overcooking.

The preset library is a great entry point, with just a tweak of the threshold node and output level needed to initially marshal errant peaks and resonances. Though the process is reductive, like compression, the effect of Smooth Operator is more akin to EQ than dynamic processing. For those familiar with Kush Audio’s Clariphonic EQ, there is a similar learning curve for Smooth Operator. Using bypass to A/B results and prevent overcooking of the effect, which can be a mix killer. Unless the source is in serious need of surgery, just getting a few peaks and flashes in the required frequency areas of the spectrogram is all you’ll see when the plug-in is doing its best work.

Smooth Operator is happy sitting anywhere in a processing chain, from tidying up a drum bus before hefty compression to de-resonating a vocal before harmonic distortion.

On bass, it’s easy to cut away bass guitar amp boxiness while retaining the essential low-mid harmonic balance, and to keep synth bass bottom-end in check without robbing the mids and top of bite.

Whether on a mix, instrument or vocal, Smooth Operator can easily lift perceived volume without touching the peak level, which is great before or after more traditional dynamics processes. The node/curve approach gives the user a malleable de-ess tool that can work at multiple points across the spectrum, which is a gift for shaping low mids and cymbals simultaneously on a drum mix, or sibilance and mic proximity effects in a vocal. As for harsh synth leads and pads, there is plenty of smoothness on tap to take some heat out without sacrificing presence.

In Smooth Operator, Baby Audio has developed a tool that produces a significant effect in a subtle way across a vast range of production elements. Its smoothness extends beyond sound quality, too. Its minimal but informative interface lends itself to critical listening over looking and clicking. On top of this, it’s as light on your CPU as it is on your wallet.