Is it getting hot in here? Baby Audio’s Parallel Aggressor spanks and heats up your audio, but how aggressive can it really be? 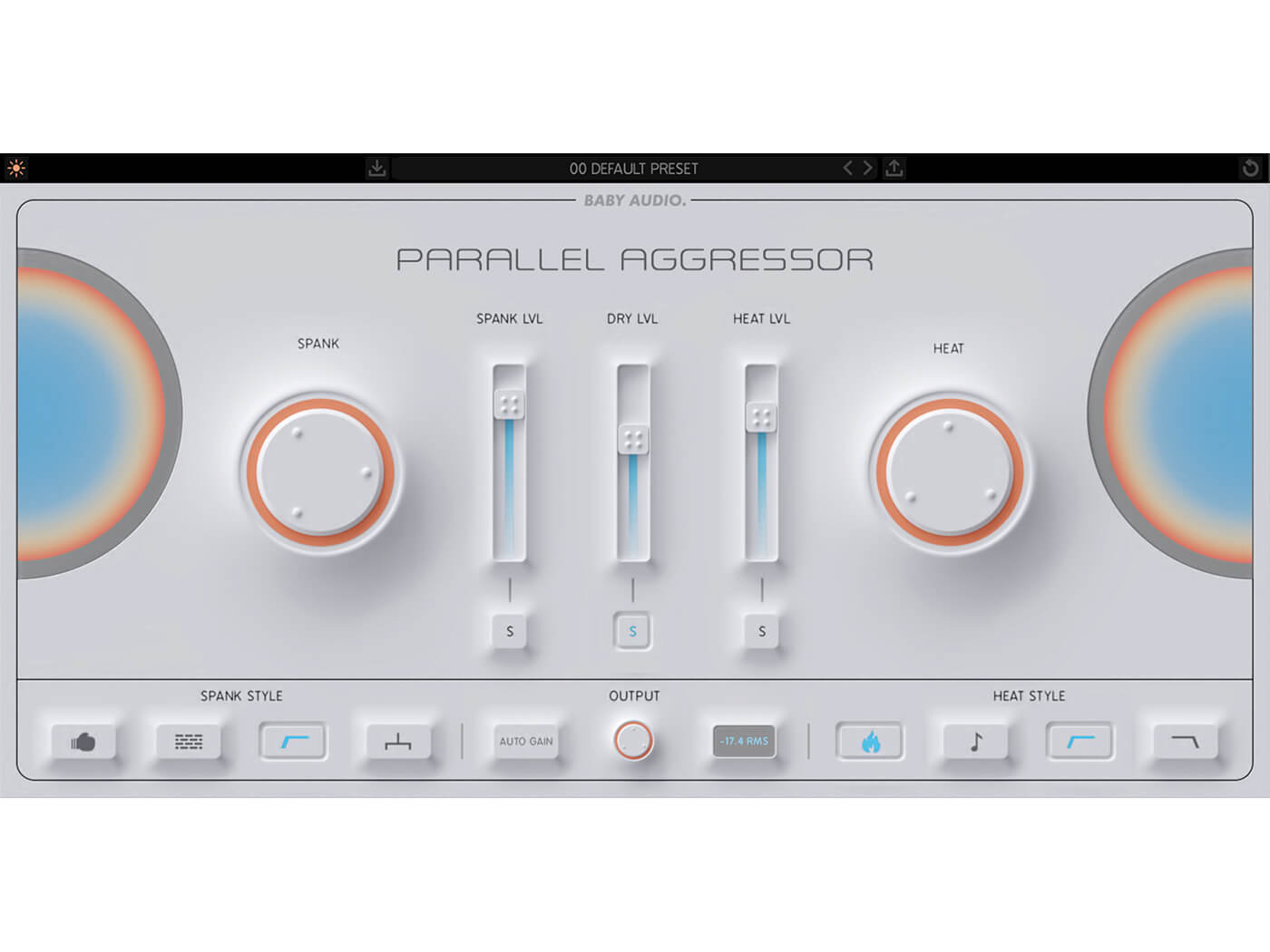 Baby Audio’s inaugural plug-in, I<3NY, was created whilst the company was finding its feet in the Big Apple. It’s fitting, then, that after relocating to LA, it revisits the Five Boroughs-inspired spanking machine and turns up the heat. The brand’s fourth multi-effects unit splits your signal three ways to deploy saturation and New York – or parallel – compression; two essential ingredients for punchy drums.

Parallel Aggressor improves on I<3NY, a four-parameter plug-in that simplifies the process of parallel compression with a Spank dial. You’ll get a fader for Spank, Dry and Heat levels, with a solo button underneath each to hear the effected signal on its own, plus some parameters for Spank and Heat. The idea of the plug-in is to reduce the amount of bus processing in your project while offering a fuss-free approach to adding colour and heavy compression.

On the left of the plug-in, you can fine-tune the weight of Spank, while the right side is where you dial up the Heat. Both feature a large amount knob which ranges from zero to 100, with an adjacent gauge that visualises the strength of each effect. As you crank up the amount, the interactive displays will expand and develop an orange hue. These are useful tools in observing how the signals are reacting to Spank and Heat.

Spank intensely compresses your signal, bringing out the transients of a kick and snare, for example. This is an effective way to make instruments cut through a mix and give them a little more presence. Parallel Aggressor does this well, although it does tend to give some drum parts a bit too much click. Four buttons are housed below the amount dial. Extra Punch gives lower-frequency sounds more thump, which proves useful for kick drums and bass lines. Extra Smack, sporting a fitting image of a brick wall, squashes the sound and makes the dynamic range much smaller.

Spank’s Mono button is especially useful for low-end sounds, ensuring the centre of the stereo image is striking. Conversely, if your low-frequency content doesn’t need a smack, a sidechain filter is onboard to squash anything above a pre-defined frequency. Some users might want more control over the sidechain filter, but we’re not convinced that’s necessary. 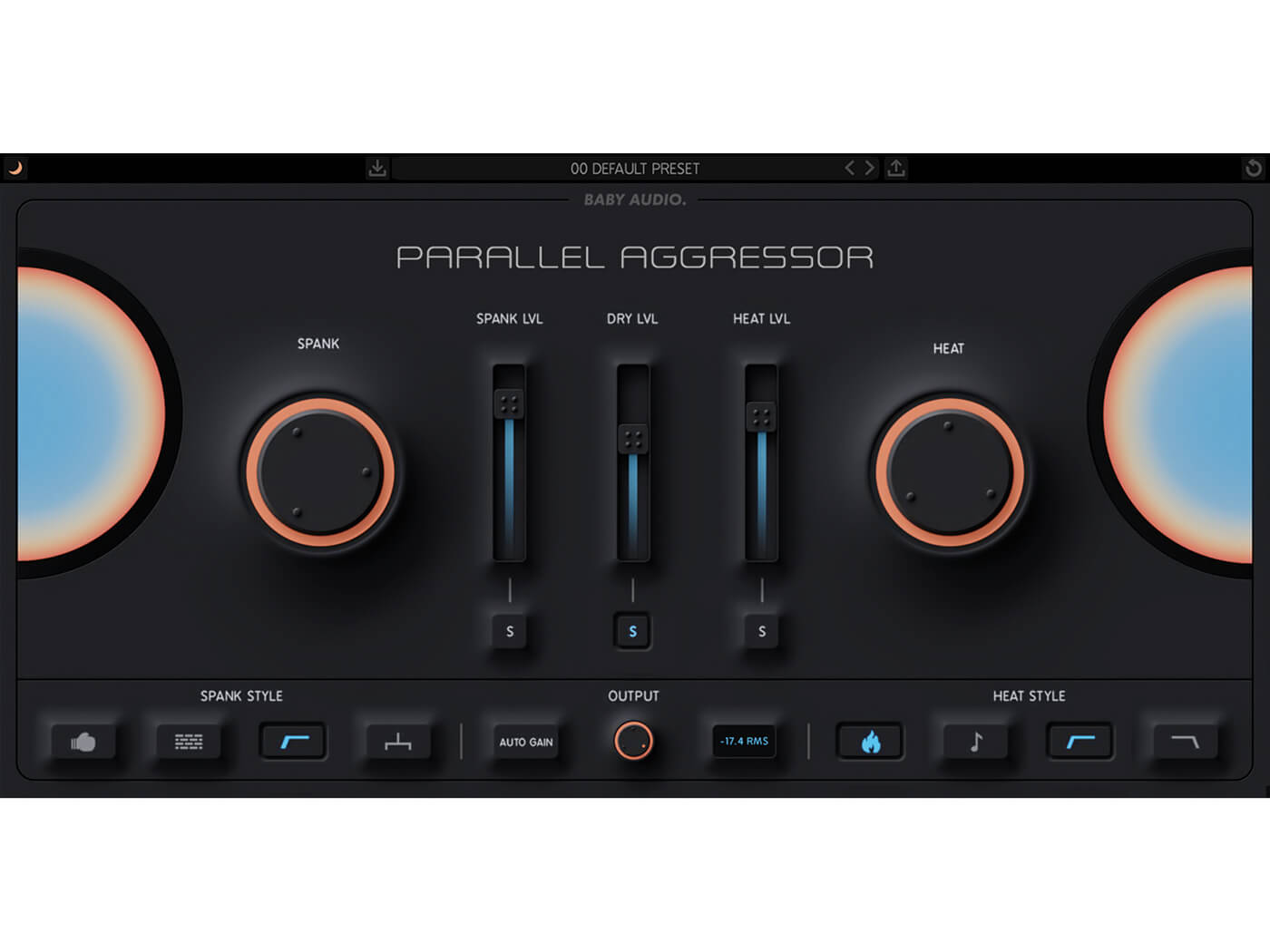 Baby Audio’s Super VHS also makes an appearance in Parallel Aggressor with the Heat algorithm – an awesome tape-style saturator that works wonders in adding character. Often during our testing, we applied Parallel Aggressor purely for injecting some warmth into some parts with Spank set to zero. For further grit, the Extra Heat button will apply a slightly heavier distortion, while Tone will provide more buzz. The High-pass and low-pass filter buttons are particularly handy when you want to cut off harsher frequency content or stop low-end sounds getting muddy.

We’ve mainly spoken of Parallel Aggressor in the context of drums but its power can be harnessed for practically any instrument. 24 presets are featured for a range of instruments, plus dedicated presets for 808 loops, lo-fi sounds and intense decimating.

Parallel Aggressor won’t fix a bad drum take or a poorly mixed set of samples. What it might do is elevate a great mix and add some weight and much-needed colour. Although perhaps counterintuitive, we found that it’s even more useful when put on its own bus send with the dry mix fader set to zero with Spank and Heat on your desired amplitude. The plug-in was much more appealing at its introductory price of £29 but £47 isn’t so bad, especially as it may become your new secret sauce for drums.

If you’re really only on the lookout for one type of parallel compression, then Baby Audio’s first plug-in should do the trick at a slightly cheaper price. It’s as wonderfully simple as it gets.

A similarly priced multi-effects plug-in that features a transient shaper, multiband compressor and parallel compressor. You’ll get a bit more control over the compression, but there’s no saturation here.