If the brand’s past plug-ins left you singing, ‘Baby, come back’, you’re in luck. Its latest is a low-cost delay with features far beyond time-based processing. 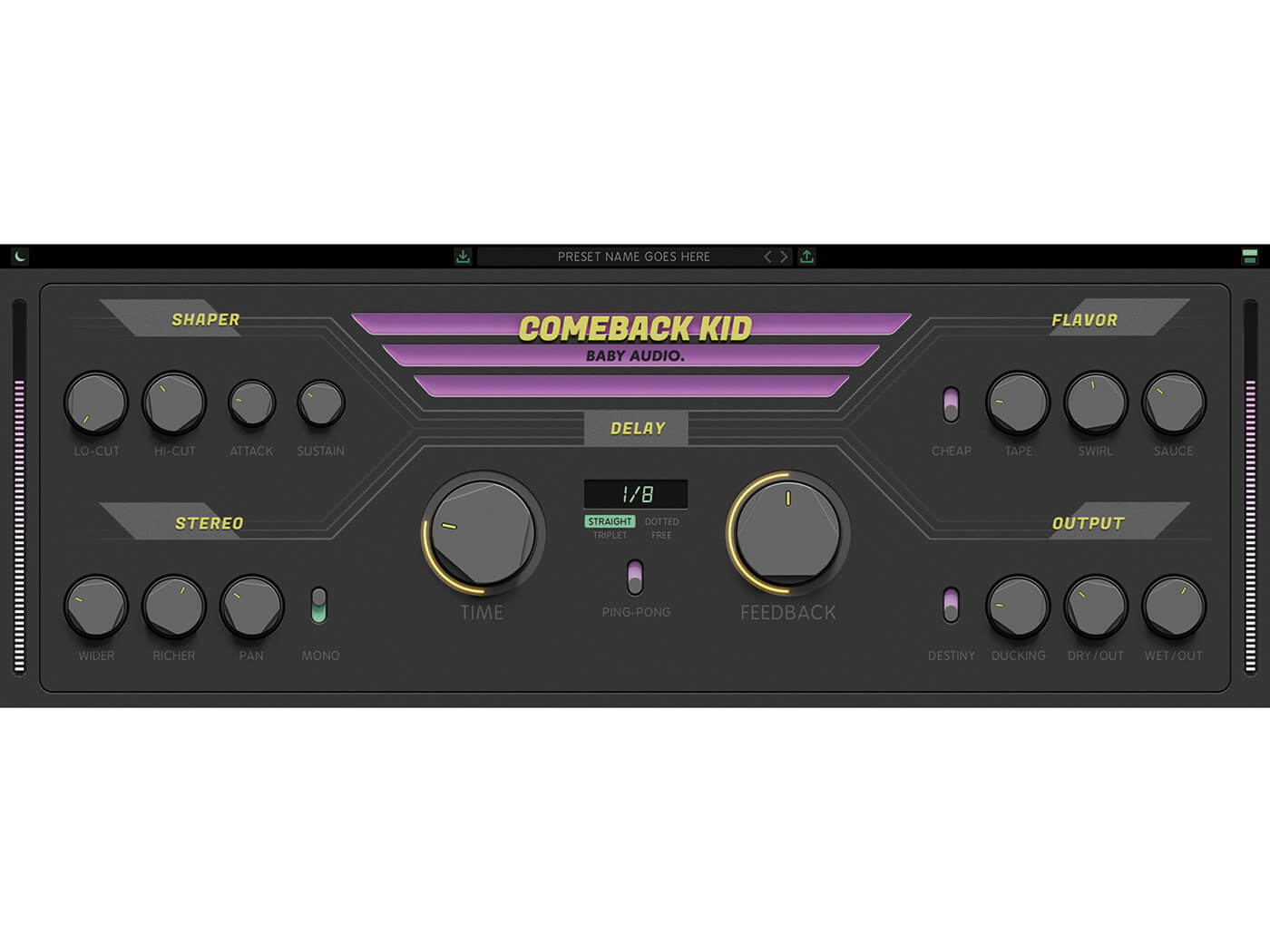 Don’t call it a comeback. While this may be Baby Audio’s first release since its relocation from New York to Los Angeles in early-2020, it shouldn’t be seen as a rebound or return to form. The truth is, since the young company was founded in the Big Apple in 2019, its form has yet to slip.

Following the critical successes of its 1980s-inspired Super VHS multi-effects and
its I Heart NY parallel compressor plug-ins, Comeback Kid sees the newly California-based brand unashamedly playing into its established niche. As with previous plug-ins, Baby Audio’s latest lets users dial in satisfying sounds without having to mess around with parameters or dive deep into menus, this time thanks to BPM-synced straight, dotted and triplet modes, a free-moving mode set by milliseconds, and a ping-pong button.

Comeback Kid is available in two skins and two sizes, meaning users should be able to see it clearly regardless of their screen size, their distance from it or their colour settings. Surrounding its analogue-esque display are the delay time modes, ping-pong mode, and time and feedback dials. The time dial extends only to 2500ms and has an odd ramp-up, and the feedback tends to get stuck at full whack – you’ll need to tamper with it and replay the audio to fix this.

The Flavor section adds analogue-style colour to your delay signal via four features. The Cheap switch reduces the delay’s bit rate for a touch of lo-fi fuzz and the Tape dial emulates tape saturation, but both are too tame to properly decimate your audio, instead providing some warmth and slight distortion. Swirl is a sumptuous phaser that sounds superb when used in conjunction with the ping-pong mode, while Sauce, essentially a modest-sized reverb, adds spacious depth to the signal.

The Shaper section’s low- and high-cut filters aren’t harsh on attenuation, and let
a bit of frequency content leak through. The attack and sustain knobs are special, and allow you to control the envelope over the filtering. Want to emphasise the low plucks of a guitar, for instance? Set the attack to high with moderate sustain and hear them shine alongside the higher harmonics.

With Wider, Richer and Pan, you can enhance or reduce the stereo image of the delay. The first widens the stereo image by sending two faintly out-of-time delays to either side. Richer does the same but in a more dramatic way.

The output section features controls over wet and dry signal volumes, plus a ducker dial that halts the delay while the original signal is playing. The Destiny switch here is meant to lend your delay a less automated and more unpredictably human vibe but
its contributions are indistinct.

It’s hard to ignore Comeback Kid’s multi-faceted presets. This is more than just a delay plug-in, with presets that add lo-fi crunch, chorus, movement and a variety of delay types. Perhaps it would be best served by adding multiple instances to a bus and applying various blends of colour and time for some wicked sound-design action. For £23, this is a fantastic plug-in. It feels like Baby Audio is just getting started.

Denise Audio
Slappy £27 (or free with another plug-in purchase)

This unassuming device from Denise Audio is touted as a dub delay but bears some of the same features as Comeback Kid. You can apply saturation and filtering, but there’s no BPM sync so is more useful on one-shots.

A delay packed with multi-effects like ducking, reverse, overdrive, chorus and more. Plus a modulation section to play around with depth of filtering, phase and movement. The delay time is synced up to BPM and feedback goes up to 120%.