The latest version of Stems claims to take your audio and split it perfectly into beats, music and vocals. We divide and conquer. 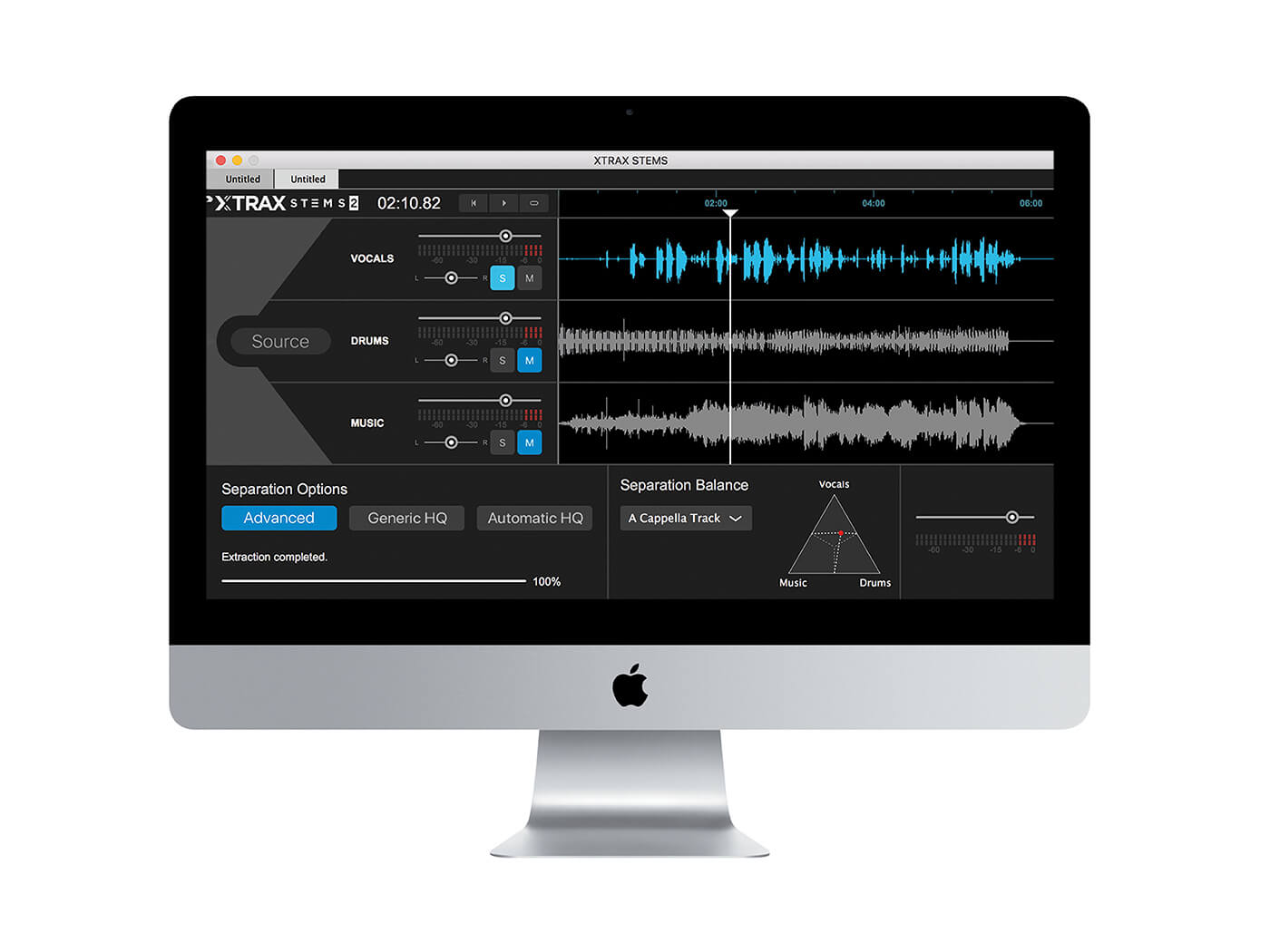 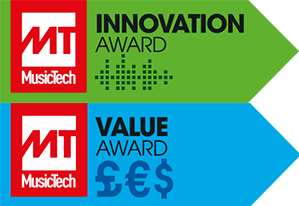 For many years, remixers, DJs and producers have been trying to get in and separate a stereo mix, so that they can extract parts to remix, or lift parts out, change notes and reinsert them. It’s something of the Holy Grail of music production software and one we’re constantly asked about here at MusicTech. For many years, our reply was: try black magic, witchcraft, or get a computer the size of HAL in to give it a go. Getting into a stereo mix and messing about with individual parts was beyond the scope of most technology.

Then along came Celemony’s Melodyne, which allows you to get into a piece of music, track by track, and it does it pretty well – as well as a lot more besides – but you need to know what you’re doing to get the best out of it. Xtrax Stems attempts to do it on a more simplistic level, and at a price of just $99.

It could be a revolution, then. The software splits any audio track into vocals, beats and music, the former two being arguably the most useful. Getting a vocal for a remix project means you very often have the most distinctive part. Getting a groove from a track is also a useful practice and you can use it as a base for your own beats, or as a backdrop to your tune.

The music? We can see how useful this can be – you could use it as the basis for your own compositions, perhaps, following chord progressions and song structures to emulate the perfect pop song. But the real questions to address here are: how well does the software actually carry out these audio extractions, and are the results any good?

I’ve already reviewed the very first version of Xtrax Stems and it’s fair to say that the results were a little hit and miss with it. The more sparse the original tune, the better the outcome most of the time, but even that wasn’t really guaranteed. And it has to be said that with something that works like this, you’re probably always going to get some audio artefacts – those bits of the audio file that you are trying to get rid of that just can’t be extracted, because they are too close in sound to what you’re trying to keep.

However, with version 1, I did manage to wrestle some decent results out of the software, and I concluded: “Xtrax Stems has a lot to offer in terms of instant gratification and for a silly price, considering the processing it does.”

So now we have version 2 and the end results should be an improvement, although the processing itself is similar. It’s not that clear how that processing works, but you’ll need a good internet connection – because it doesn’t take place on your computer, but is instead carried out by the machines at the Audionamix HQ. You upload your chosen track, choose the processing type and those mainframes roll into action, lights flashing, tapes whirring (okay, not really)… and the split stems are spat back to you. 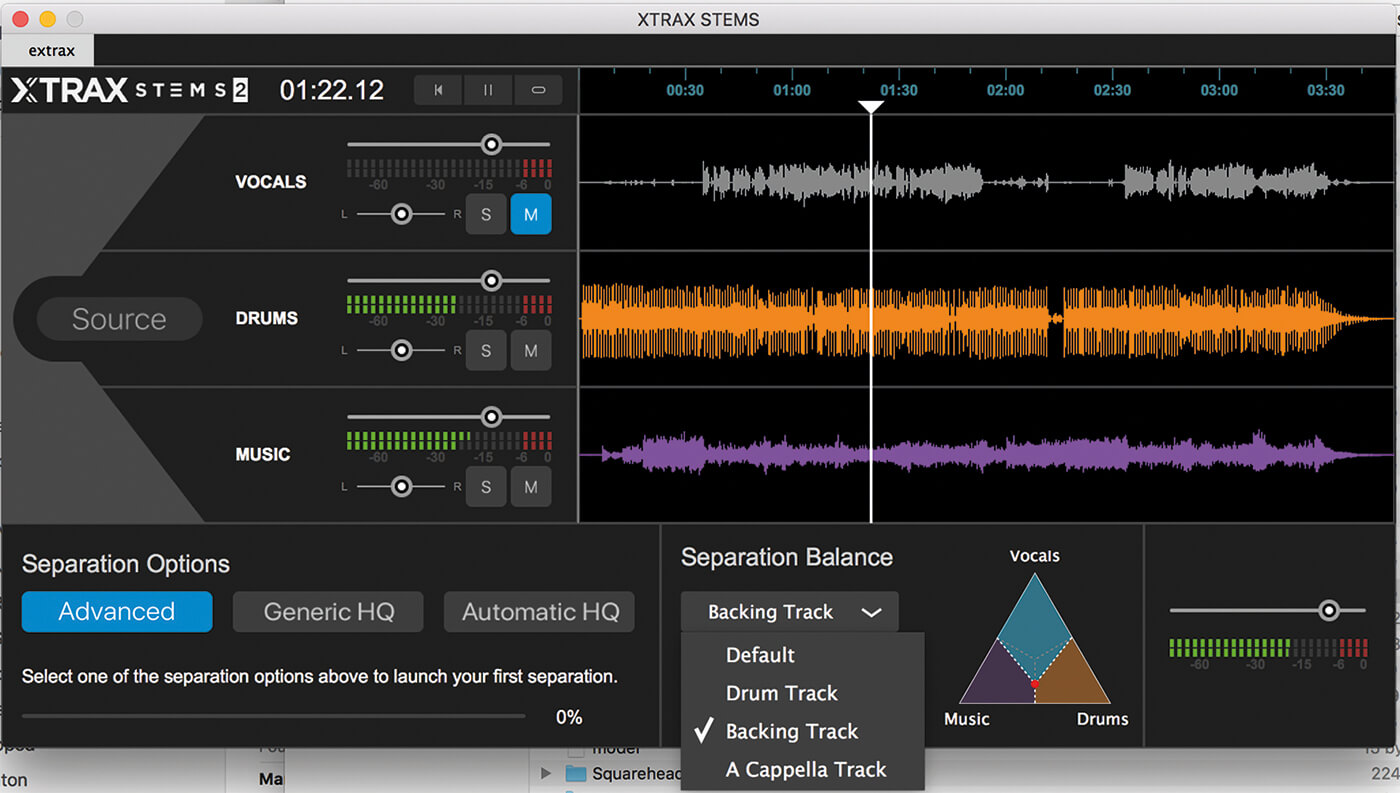 The company describes the actual processing part as “based on artificial intelligence”, so it’s fair to say that there will probably be some precision EQing and vocal-recognition software (as used in the likes of Sound Forge Pro and other high-end audio processing packages) in there somewhere. Either way, you’re getting a lot of power for the price, plus some big improvements in v2.

First up, one of the algorithms is claimed to deliver 30 per cent faster results. Then the drum processing has also been improved with a higher fidelity to extract better beats. There’s also an all-new ‘fully adjustable, real-time Separation Balance matrix’ which initially sounds and looks like a fancy name and graphic for a mixer, although I will be proved wrong on that.

Native Instruments’ Stems compatibility is here, too – that’s the audio-file standard for DJs which splits sound into bass, drums, vocals and melody. That was there in version 1, but there’s just a hint of extra emphasis now. The best news is that Xtrax Stems 2 is now PC compatible – it was Mac-only at version 1.

Version 2 initially seems simplified and sleeker. It’s quick to get up and running and you simply drag-and-drop your audio files into the main window, or click on it to open a browser.

The Separation Options are where it’s simplified – now you just get three rather than version 1’s four. Automatic HQ uses an Automatic Voice Activity Detection process where vocals are separated only when detected, and is recommended for creating a cappellas. Generic HQ creates vocal stems based on the melodic content of the song and should be used when Automatic HQ’s vocal detection doesn’t quite cut it.

Finally, Advanced is the super-quick one and best for backing tracks. I gave all three a go in my tests and found that Advanced and Automatic gave me better results, but you should try all three to hear the difference, as it can be quite marked. You may not think Generic is up to much on one song, for example, but then it pulls the stops out on another. 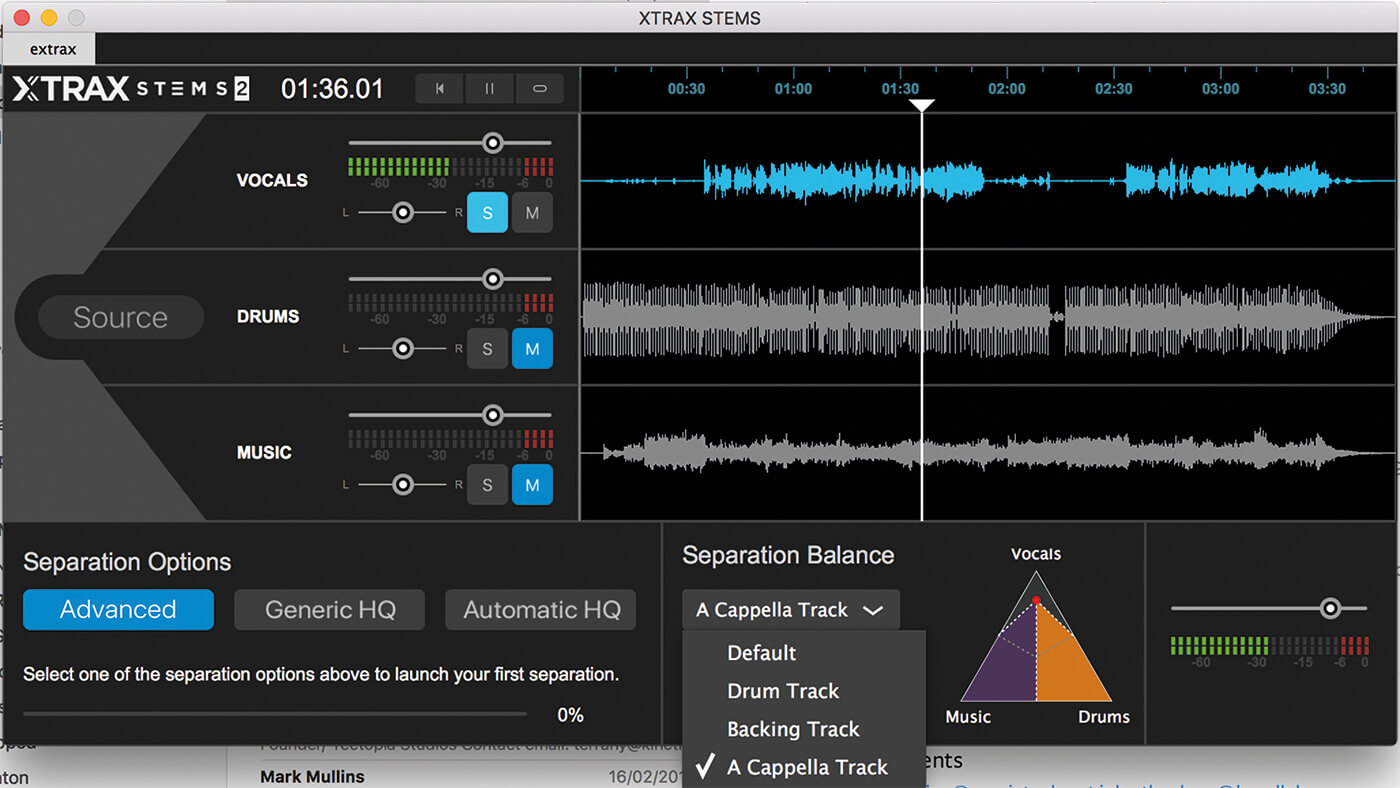 You really do need a fast internet connection. The software uploads your audio to the throbbing machines at Audionamix and, for my slow connection, this took a good 10-15 minutes per track, and that’s before the extraction processes began. (I do still have a terrible connection, so expect much quicker results if you are living in the 21st century.)

Once done, you get the three parts laid before you. I started with a bit of a-ha’s Take On Me, that incredible multi-octave vocal providing the main test. I have to say I was taken aback by how much of an improvement the results were over version 1. Yes, there are still artefacts, but Morten’s vocal cut through and you could easily make out a good 90 per cent. The drums, too, are a vast improvement.

In version 1 there were a lot more artefacts, but here I could easily use them as main beats, albeit with some precision mixing. The instruments were less successful, swirling with rather too many artefacts for me. Trying it on other source material, I was again impressed, particularly on sparser tracks from Talk Talk, where the vocal seeped through from the recently sadly departed Mark Hollis.

The Separation Balance matrix is also a great help here. Far from it being just a mixer for the three elements, it offers slight improvements over each part, perhaps at the cost of more artefacts, but gives you a lot of flexibility. With version 1, I was sceptical that you’d need to mask the artefacts with your own sounds. Now, you can use a proportion of vocals and drums on their own – a big step up.

Xtrax Stems is a very targeted piece of software that you’ll know will suit you after reading the first paragraph of this review or witnessing a quick video demo. Version 2 is a far more useful tool for both DJs and remixers and can even be an aid for composers (see boxout above for more). I wasn’t expecting a huge improvement over version 1, but it’s come on leaps and bounds. Don’t expect Melodyne-level precision, but for $99, this is still an innovative and great-value package.

With a fast internet connection, it can also be great fun and an education, just splitting mixes to hear how the pros do it. Version 2 may not be perfect – but by its very nature, can software like this ever be? However, it’s a big improvement over version 1 and for the same outlay.

You might think of Xtrax Stems as a remix and DJ tool and, yes, you’d be right. So if you count yourself in either or both of those camps, we’d heartily recommend the $99 outlay. However, as a composer’s tool, it is also surprisingly useful. The more musical side of the software allows you to lift arrangements and examine them in detail without the distraction (mostly) of beats and vocals, so you could find it a useful creative tool too, not to mention a karaoke track creator – basically your tunes, minus vocals. 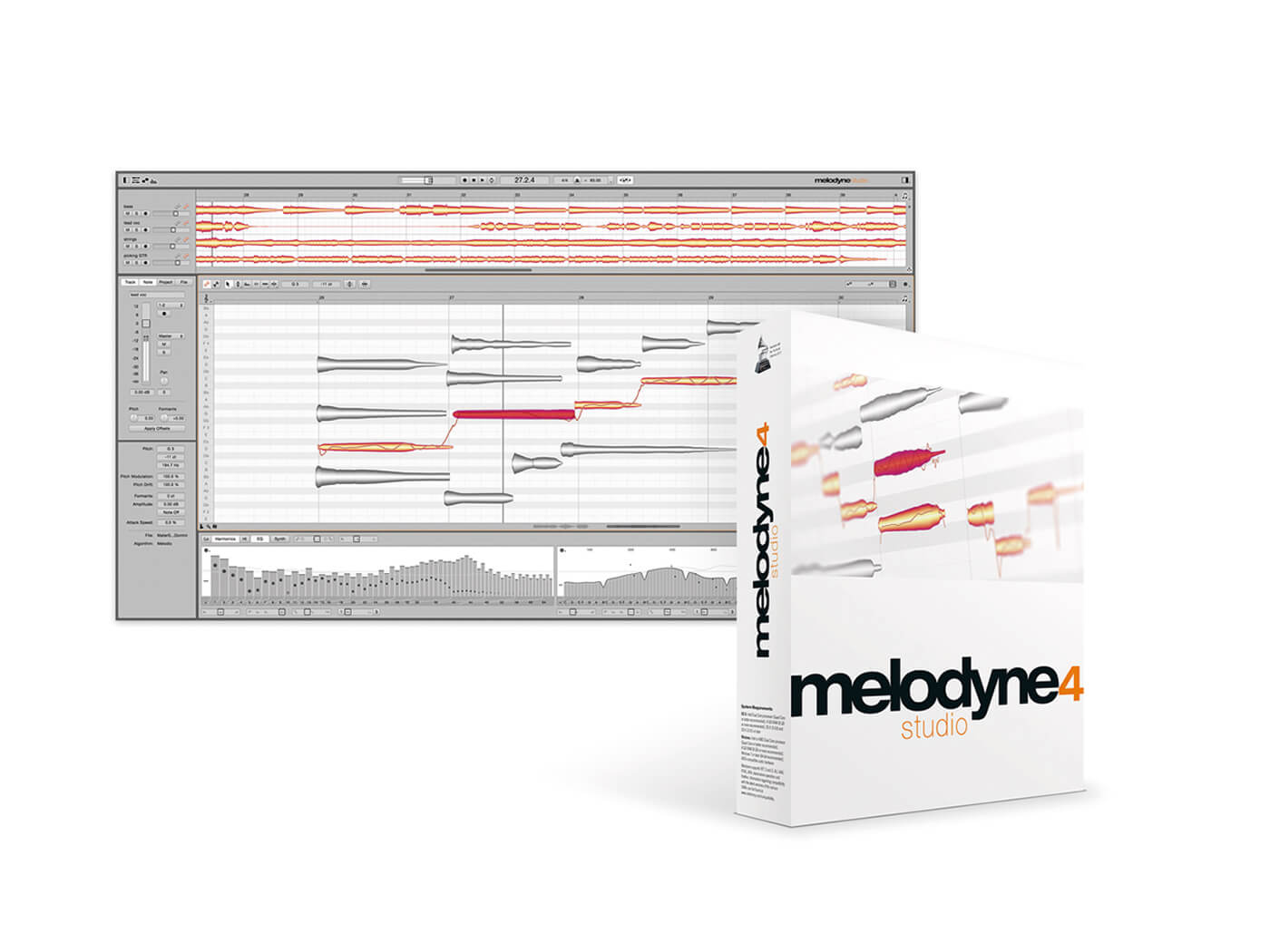 This is software that really lets you get to the heart of your mix and adjust individual notes, timing, scales… In fact you name it, it can do it. It’s basically black magic under another name, but incredible to behold (but it can be pricey, too). 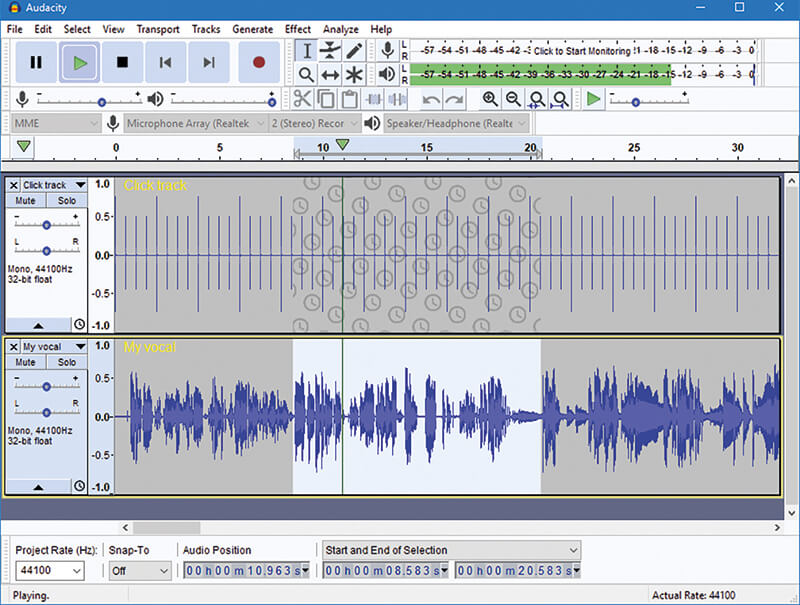 This open source donation-ware is for Mac, PC and Linux and allows you to go in and home in on certain parts of your music. You do get mixed results, but there’s flexibility in the controls and options to alter quality. The process is fast, too.