With its new twist on the virtual analogue synth, are morphable oscillators and flexible modulation enough to make Continua stand out or is this plug-in damaged goods? 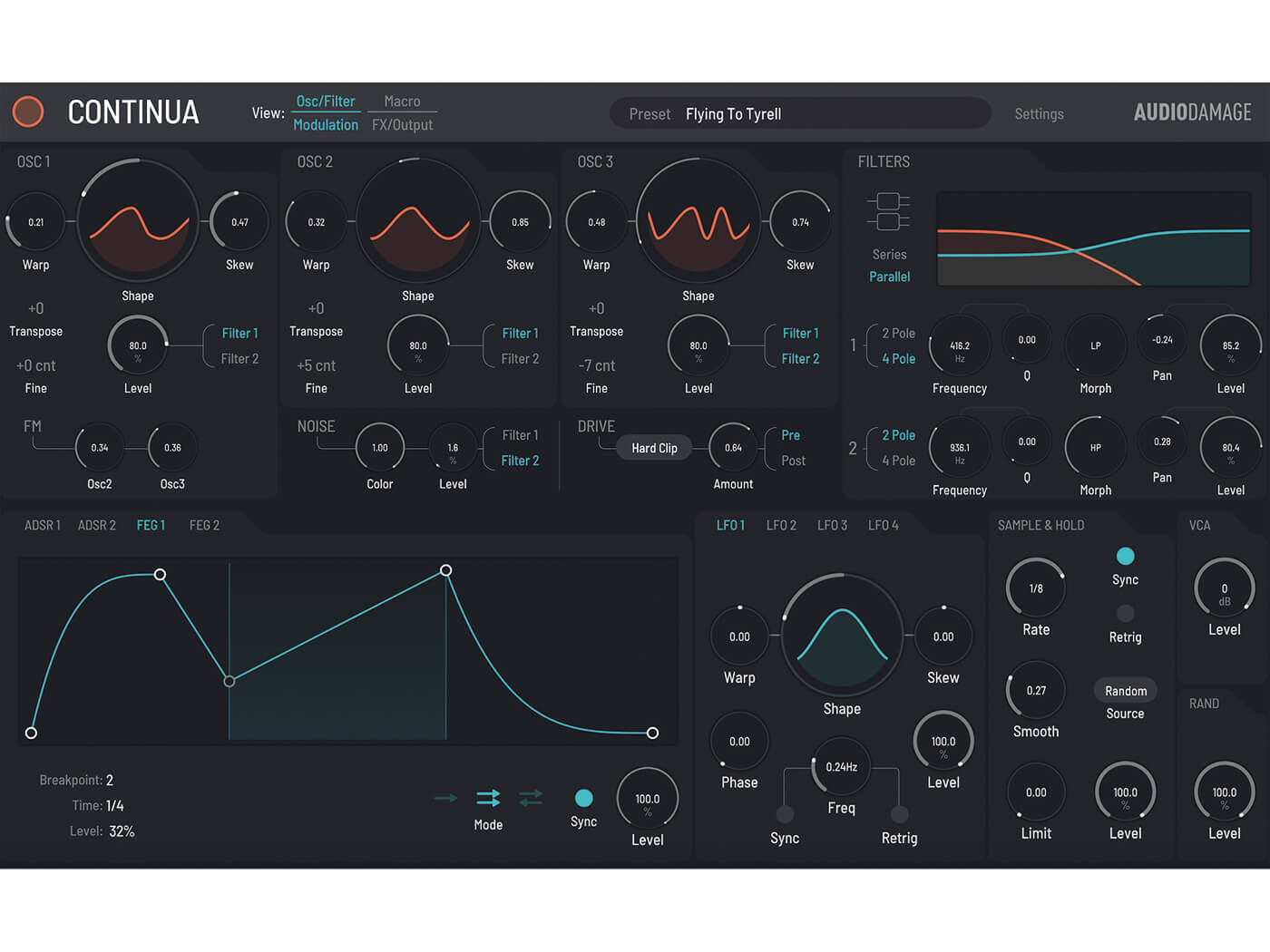 When it comes to the creators of interesting instruments and effects plug-ins with clean and futuristic GUIs, Audio Damage is up there with the best of them. Whether it’s a visually striking granular synth or a beautiful and innovative looper, there have been plenty of fascinating releases from the Colorado-based company over the past few years. The latest is Continua, a virtual analogue synth instrument that may look predictable but boasts a bewitching quirk beneath its surface:  continuously morphable oscillators and filters. This isn’t an entirely new concept but, when combined with some extensive modulation options, allows for the creation of truly complex and evolving sounds.

Like Audio Damage’s other recent releases, Continua comes in desktop plug-in and iOS formats, with touchscreen nuances coming across in the GUI layout. Most of the controls are simple circular dials, and there’s a main oscillator/filter and modulation page, and an effects and macros page, complete with performance dials and two X/Y pads. When things are in motion, the plug-in is a pleasure to look at, as waveforms and filter shapes dance around, offering immediate visual feedback. However, Continua also features a lot of text, much of which is found floating against a dark background, which can make things a little overwhelming  visually.

At its heart, there are three morphable oscillators, with additional Warp and Skew controls for creating more complex shapes. Sweeping through waves gives you an effect similar to that of wave-shaping but with smoother and potentially less complex-sounding results. You can further shape your sound with FM cross modulation, a noise oscillator with colour control, and a pre- or post-drive with five algorithms.

Although the drive is a nice touch for adding extra harmonics, some of the algorithms don’t make much of a difference, and they vary dramatically in volume. Each oscillator can be routed through to two filters, which can be run in series or parallel. You can smoothly morph these between low-pass, band-pass, high-pass and notch-type filters, with 2-pole or 4-pole slopes. As these can be panned, you could create a super-wide sound by running them in parallel and panning them left and right with different oscillators routed to each. 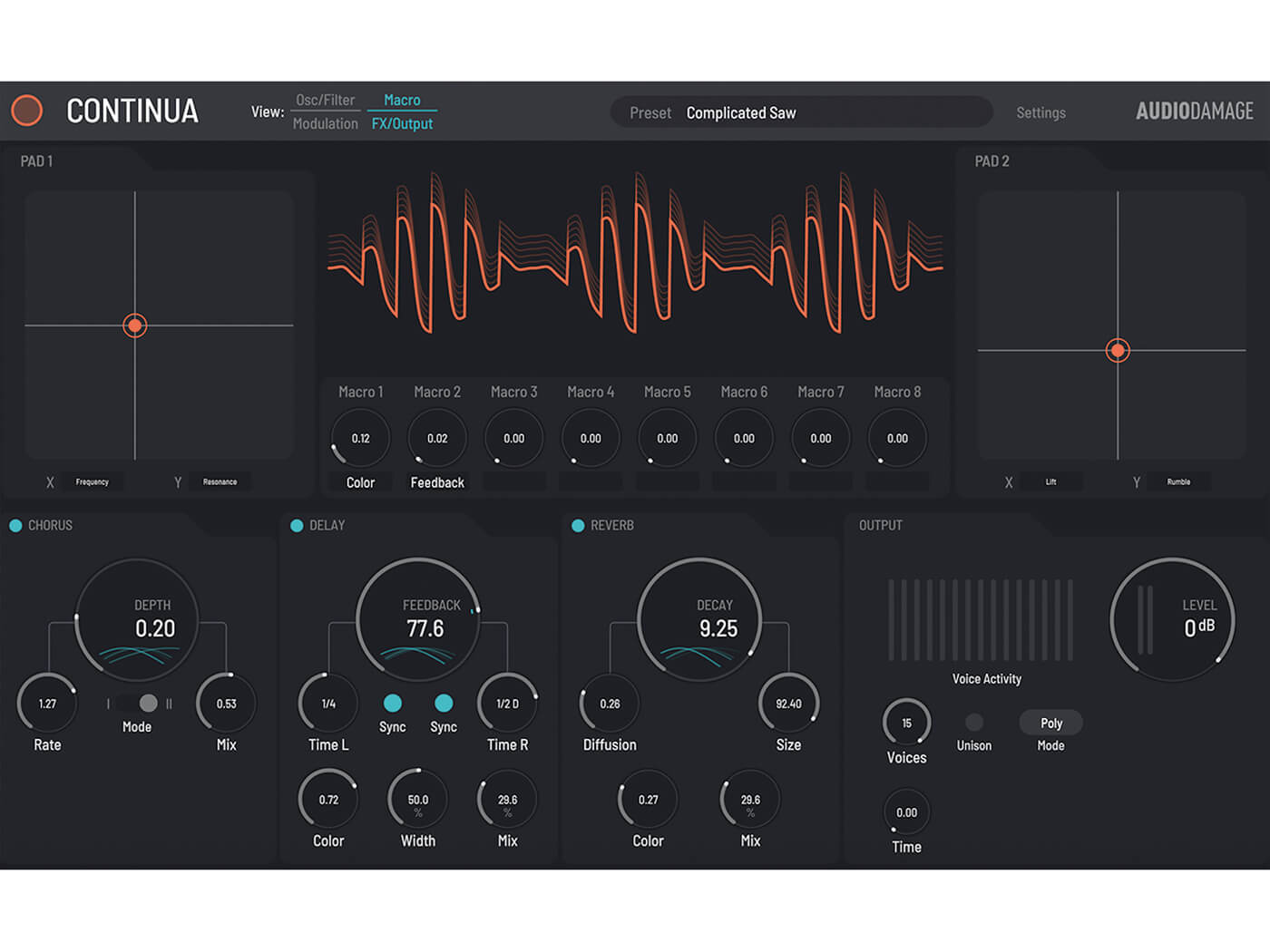 These are the raw building blocks of the synth. We find the sounds of the oscillators and filters a little flat compared to some other virtual analogue synths we’ve heard. The sound doesn’t especially jump out of the speakers. However, this is a synth built to be modulated and //here// it truly shines.

With the exception of the various toggle buttons, everything on the main page can be modulated by simply right-clicking the dial and selecting a source. There are two ADSRs (with curve controls), and two FEGs, which are essentially loopable, split-point envelopes for more flexible and complex modulations. There are also four flexible LFOs with warpable shapes, as well as more Warp and Skew controls.

With all this available for modulation, you can create some wild shapes by, for example, modulating a filter sweep via an LFO whose own shape is being modulated by another LFO, which is having its rate modulated by an envelope. The possibilities are almost endless. The only downside is that, in sync mode, the maximum speed of the LFOs is 32nd notes. Technically, you can get audio-rate modulation by using the FEG set to loop over a very short time but the results can be unpredictable.

There’s also a sample-and-hold module for more random and stepped modulations, as well as the usual key, velocity, aftertouch, mod-wheel and pitch-bend sources.

The second page of Continua houses the effects section, where you’ll also find eight macro dials and two X/Y pads to which you can assign any number of parameters. To spice up your sounds, head here. The effects include a chorus with two modes for subtle and more extreme detuning and width, as well as a syncable stereo delay and a lush reverb. The latter is particularly useful for adding atmosphere, and sports a diffusion control with which you can change the density of the echos, and create long, smooth tails.

The effect dials can be controlled via inputs such as velocity and the macros but not by the modulators on the other page. All of the effects have been built by Audio Damage especially for Continua and help to give the plug-in a more unique sound. There are plenty of presets to showcase this, with the main patches offering slightly more traditional basses, keys and leads, alongside some deep pads. Things get a little more rewarding with the artist presets from Glitch Machines, Red Means Recording, Red Sky Lullaby and SonalSystem, which really show off what the synth is capable of when pushed to extremes. Many of these come with pre-mapped macros for extra tweaking too.

Continua is a fully polyphonic synth with 15 voices. The modulation sources are polyphonic as well, meaning that each note can evolve independently. There’s a unison mode that lets you play all 15 voices monophonically for a super-rich sound. It’s a shame, though, that there’s no detune dial to create even thicker timbres.

Because each voice runs independently, Continua can support MPE controllers such as the Roli Seaboard and Haken Continuum for extra expression while playing. There’s a switch in the settings that turns on MPE, which makes Continua react to MIDI data polyphonically. After enabling MPE, just select CC74 as a mod source. Other notable features include the ability to import tuning tables, aftertouch smoothing, a cross-platform preset format and a fully resizable Retina GUI. We found Continua to be fairly light on CPU usage, unless of course you run all 15 voices at once using Unison mode.

With all the main editing tools on one screen, solid visual feedback and a fairly intuitive layout, Continua is relatively easy to program. That said, the sound of the morphing oscillators and shapes of the LFOs take some getting used to.

The flexible modulation system encourages experimentation but it’s also easy for patches to get out of control, meaning you have to go back and right-click on parameters to check your routing. If you’re used to doing more complex sound design though, this shouldn’t be much of a problem. This is perhaps where Continua is at its best. It’s capable of very intricate and modern sounds. We wouldn’t necessarily reach for it to craft more traditional patches but it excels at expressive, atmospheric pads and moody leads. A continuation of Audio Damage’s good work, then? We’d say so.

There’s no shortage of synths on the market. It’s highly likely you own a few yourself. If you’re after an all-purpose virtual-analogue instrument for bread-and-butter sounds, Continua isn’t necessarily your best option. There are many other plug-ins that boast more characterful oscillators and filters.

However, the vast modulation capabilities and smooth morphing options here mean that Audio Damage’s plug-in excels at deep, complex and moving sounds. All that makes Continua a superb choice for rich electronica, ambient and cinematic tracks. In some respects, the occasionally hollow sound can work in the plug-in’s favour, as it means it can be placed further back in the mix or paired with other contrasting instruments. With this in mind, it might be a brilliant synth for writing subtle beds and atmospheres for TV and film.

A similar three-oscillator synth with MPE, flexible modulation and morphing capabilities, Cypher2 has more features than Continua, including six-filter circuit models, 30 effects and an advanced sequencer/arpeggiator. But it is less intuitive.

A simpler synth with all of its parameters on a single page, Go2 lets you select two waveforms and morph between them using different modes. There’s also a sub-oscillator, an X/Y pad, a filter with eight types, an eight-way mod matrix, three effects units and an arp/sequencer.