MetricAB is a reference plug-in that’s stacked with features that could help you in your quest for the perfect mix. Prepare to go and compare.

When you’ve heard your mix a thousand times and you’re trying to get it to sound just right, using a good track reference can make a world of difference, and there have been several plug-ins released over the last few years to make this process easier. MetricAB is the spiritual successor to Sample Magic’s Magic AB plug-in, which was released a few years back, and has been designed by producer Marc Adamo under the name ADPTR Audio in conjunction with Plugin Alliance.

Using Metric AB requires you to insert the plug-in on the output as the last item in the chain, then you can load up to 16 reference tracks in a multitude of formats, with a large A/B button to switch between your project and the reference. There are buttons to set the output to mono, or to solo the left, right or sides, and you have a range of playback options that sync the reference to the DAW timeline, or let it run freely, with four loopable cue points to help you navigate. So far, so good.

You also have LP, HP and BP filters with editable crossovers and 12dB or 24dB slopes, and five static preset buttons to split up the spectrum and help with targeted listening. This is incredibly useful, although I find the filter editing a little fiddly and would prefer a more visual type of control. Another useful feature is the Loudness Match button, which adjusts the gain of the reference to match your track. This works well if the reference is pulled down in volume, but the output may clip if it is turned up dramatically, so it may have also been useful to include an additional output-volume control.

The main event for Metric AB is its five metering modes, which feature silky-smooth graphics to help you compare the different elements of your track. Spectrum is a spectrum analyser with editable ballistics; Correlation clearly shows potential phase issues across the spectrum; Stereo Image gives an excellent view of the average and range of the stereo-width distribution across the spectrum; Dynamics shows the dynamic range as a histogram and finally, Loudness is a comprehensive set of volume and loudness meters, including LUFS.

The beauty here is that you can choose to display the tracks as a single window, as two windows side-by-side, or with each layered on top of each other, with flexible zoom controls. You can also choose between five graph views including a Plot, Octave, 3rd Octave, Critical or Multi to show different levels of detail. It’s clear a lot of time has gone into making the meters look responsive and easy to read, with consistent use of blue and orange to tell the tracks apart, and the Correlation and Stereo Image meters are especially eye-opening. As a nice touch, there are also several target loudness presets for the Dynamics module, and various broadcast and streaming standards for the Loudness module.

There’s some slightly confusing routing going on in the background, which means the RMS meter responds to any gain matching on the reference, but the other meters don’t. If you have a large volume difference between the two tracks, then you may also have an issue trying to accurately view the spectrum analysers on top of each other. These aren’t game-changing issues though and overall, this is an amazingly useful A/B-ing tool to help you get the best out of your mixes. 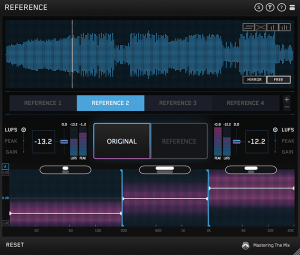 Reference is our current A/B plug-in of choice, with a clear and easy to use GUI, and plenty of information in a single window. It has a bunch of similar features such as volume match, DAW sync and built-in filters. However, it lacks the incredible fidelity of MetricAB and the ability to really compare all elements of the two tracks in fine detail. 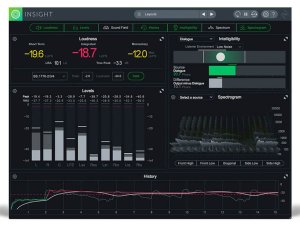 Although not strictly an A/B plug-in, Insight 2 features a comprehensive suite of metering tools, including loudness meters, a spectrogram, loudness history and sound-field meters. You can also use the Relay plug-in to view two spectrograms on top of each other, and could arguably use it alongside an A/B plug-in, although the workflow won’t be as slick.