With three unique processing stages, an ultra-retro design, and a built-in feline assistant, this could be the quirkiest way to torture your audio. 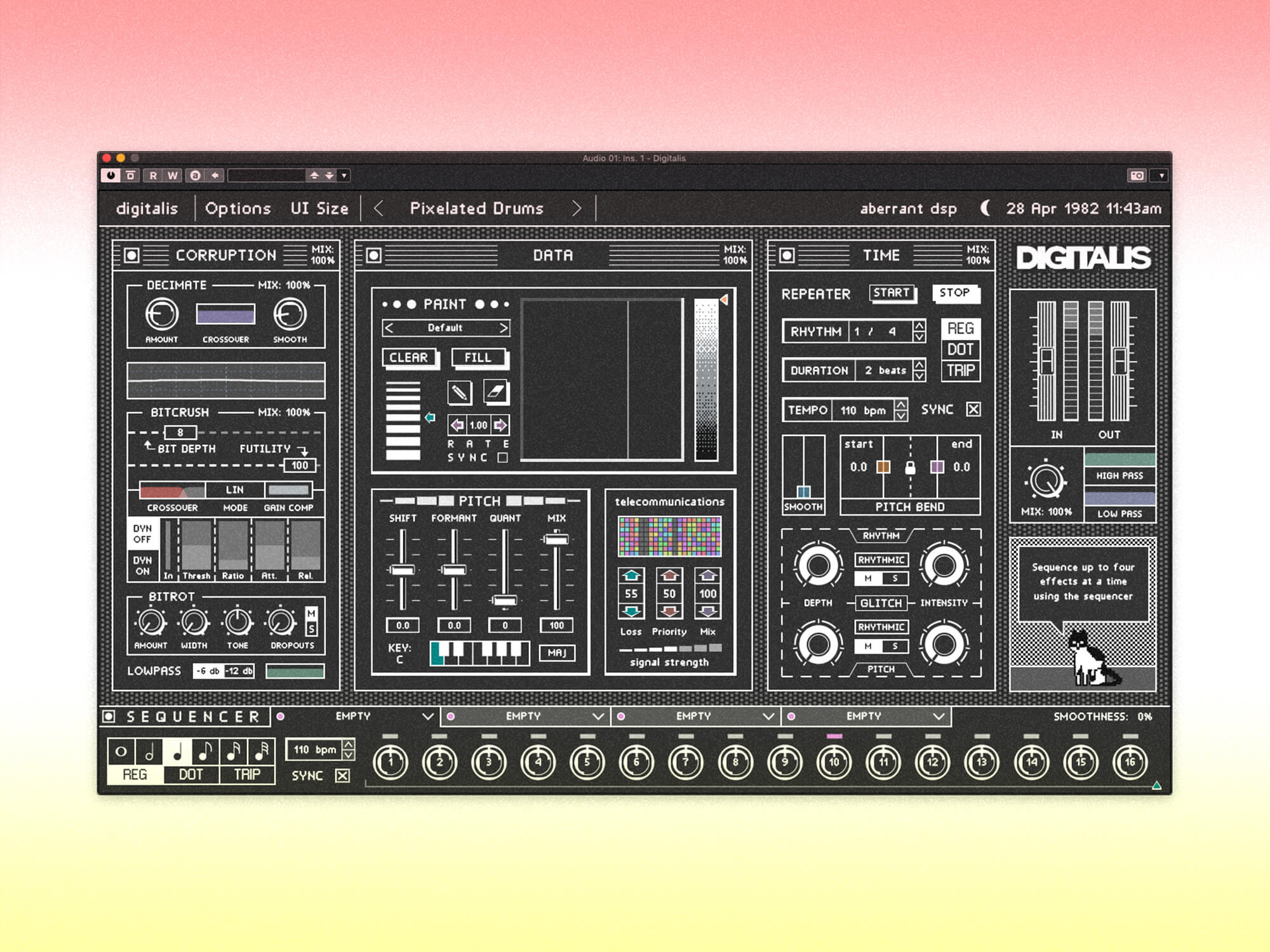 Many – perhaps most – processors designed to mash and smash your audio tend towards analogue methods of destruction. But, as its name implies, Aberrant DSP’s new Digitalis plug-in is focussed entirely on the digital domain, where it simulates low-bandwidth internet connections, laser-rotted CDs, broken converters, and all manner of other digital glitchiness.

Digitalis’ interface is a treat – designed to look like nothing more-or-less than the desktop from an old Mac Classic. There’s deep attention to detail with authentic fonts, widgets and styling, a menu bar across the top of the screen, and various background patterns to choose from. The menu bar even includes a clock and calendar that shows the correct time and date, albeit with the first three digits of the year fixed amusingly at ‘198’ (that is, 2022 becomes 1982, 2035 would be 1985, etc.).

Also amusing is Jon, a cat who sits in his own little panel on Digitalis’ faux desktop, doling-out context-sensitive hints and tips about any tool or parameter you interact with. His presence is a tongue-in-cheek reference to the various anthropomorphic digital assistants systems that Microsoft has disgorged over the years. Except in Jon’s case, the advice is always useful and he never becomes annoying! 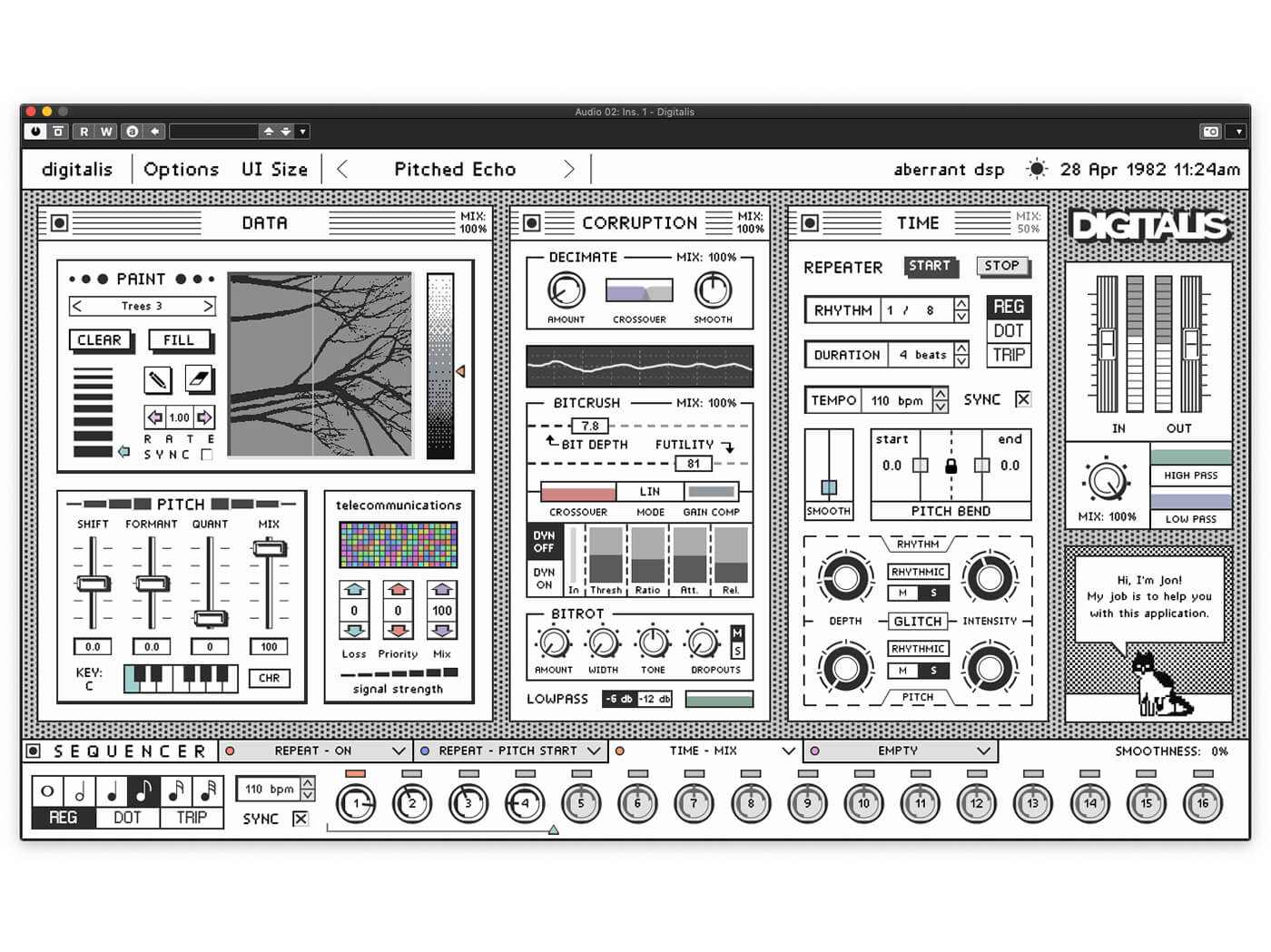 Digitalis’ three processing modules – Data, Corruption and Time – are presented as application windows on the faux desktop. The order of the modules can be changed by dragging them on the desktop and they can be bypassed by clicking on what would be the Close button on each module’s title bar.

The first section of the Data module is PaintBox. This is presented to look like an old-style drawing app, with drawing canvas, pen and eraser tools – but it is actually a spectral filter.

A scan line constantly passes left-to-right across the canvas. Where the scan line encounters marks on the canvas, the vertical position of the mark is translated into a frequency, and the brightness represents the amount of attenuation that will be applied to that frequency. You can draw freehand on the canvas, or load one of the included images and patterns.

The scan line can run at its own rate or be synced to your DAW. However, when synced, the longest scan duration available is one bar, which we felt was far too short. Longer times are available when not synced.

Data’s second section is a pitch and formant processor. The pitch shifting on offer is purposely primitive, as is the pitch quantisation that can be dialled in, all of which ensures a satisfyingly ‘artefact-y’ outcome. Formant shifting allows for some really nice tonal changes to be introduced too, although we noticed that negative settings could result in some seriously loud resonances that easily overload the DAW channel.

The final section of the Data module is Telecommunications. This emulates the washy slushiness that results from applying lossy, low bandwidth data compression to an audio signal. It sounds just like internet audio in the 90s!

The Corruption module messes directly with the bits and bytes of your audio. This antagonism starts with Decimator, a processor that extends the length of each digital byte, in essence reducing the sample rate. The effect is very tameable, with a smoothing control, and a crossover that sets the upper cutoff frequency of the effect so that lower frequencies are decimated whilst higher ones remain intact.

Next is Bitcrush, a bit crusher with a very variable character. The output bit rate can be reduced all the way down to 1-bit-per-sample, with the glitchiness of the effect under the control of the wonderfully-titled Futility control – more futility equals more break-up and glitching. There’s a crossover here too, which functions much like the Decimator crossover, and a dynamics section that makes Bitcrush’s effect respond to the dynamics in the source signal. A nice bonus here is that, with Decimator and Bitcrush set just right, the whole Corruption module can be coaxed into some crazy self-oscillations.

Bitcrush feeds into the Bitrot section, which simulates the effects of CD laser rot and physical degradation. This is generally quite a hissy, crackly sort of distortion, but includes a Dropout setting that introduces some pleasing random stuttering and signal dropouts.

The Corruption module is finished off with a low-pass filter, switchable between 6dB/oct and 12dB/oct, which is ideal for removing the higher frequency crackle and noise created by the module.

A matter of time

Digitalis’ Time module is based around Repeater. This samples short passages of the incoming signal and repeats them a set number of times, with optional pitch shifting, before sampling and repeating a new segment. The length of sample and rhythm of the repetitions is set in terms of beats and note lengths, and these can be synced to an internal BPM or to your DAW.

The timing and pitch of the repeats can be further messed-up by the module’s Glitch section. This can be done either in-sync with the Repeater itself, or in a totally chaotic manner. The results aren’t exactly predictable, but that’s all part of the fun!

Running along the bottom of Digitalis’ interface is a step sequencer with four channels, each of which can be directed to one of Digitalis’ effect parameters to create looping rhythmical value changes. Each channel is independent of the others, with individual step length (up to 16 steps), step resolution, and smoothing between steps. Channels can even run at different tempos when not synced to your DAW.

The sonic torture implements provided by Digitalis really do take audio degradation to new highs… or should that be lows? Either way, we love it. It isn’t the only plug-in that can inflict such pain on your audio, but it’s easily one of the most controllable. This gives it the ability to temper its worst excesses, allow for effects that, whilst always striking, often barely resemble distortion at all.

The design aesthetic is a lot of fun too, especially if you are of sufficient vintage to remember when things actually looked like this. The design is practical as well, the retro quirkiness recapturing something of the basic simplicity and intuitiveness of vintage software. And of course, if you are ever unsure about something, you can always consult with Jon the cat.