Looping is now more popular than ever. Marcus Leadley explores the mass appeal and road-tests the latest looper on the block… Details Price  £449 Additional dual momentary remote: £59.99 Contact  John Hornby Skewes  01132 865381 Web  www.pigtronix.com Certain types of music technology catch the popular imagination and have a profound impact on the way we […] 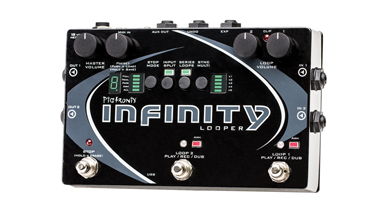 Looping is now more popular than ever. Marcus Leadley explores the mass appeal and road-tests the latest looper on the block… 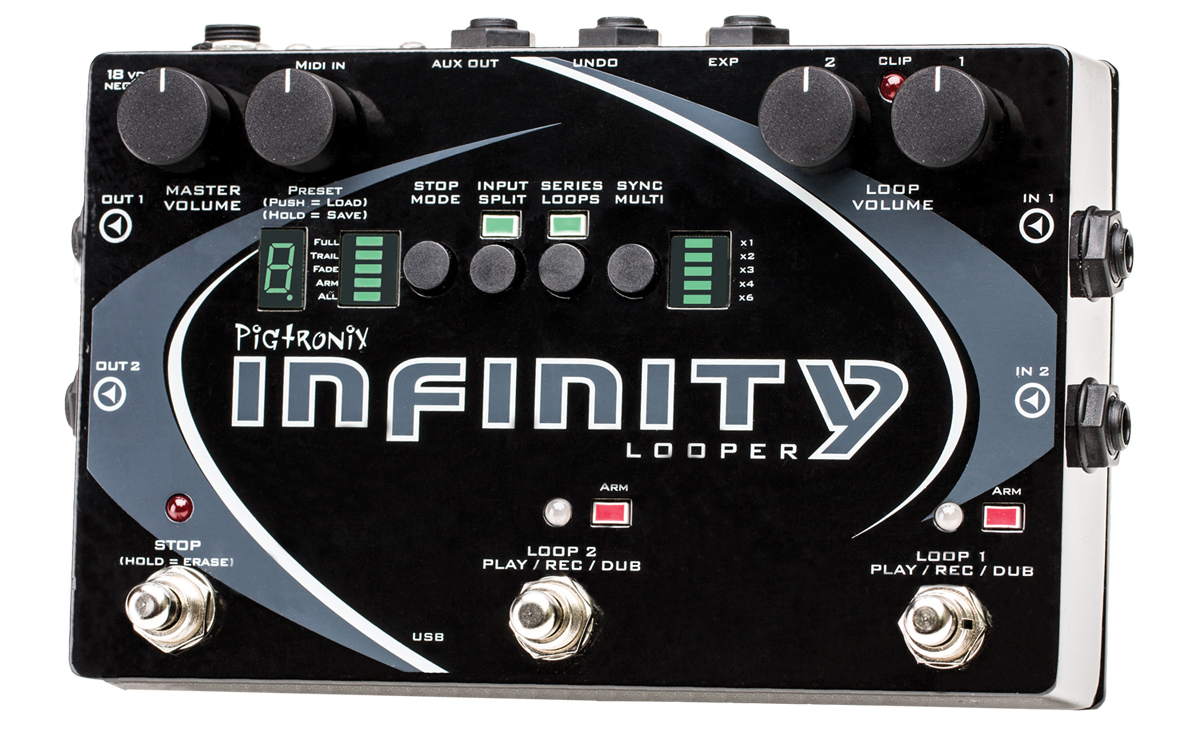 Certain types of music technology catch the popular imagination and have a profound impact on the way we make music – helping to kick-start entire genres in the process.

Since around 2000, cost effective digital looping pedals have been spreading their influence far and wide. Looping’s potential was noticed in the early days of sound recording, as evidenced by the early turntable experiments of Pierre Schaeffer and the subsequent tape-based work of artists such as Terry Riley, Brian Eno and Robert Fripp.

However, despite the tantalising possibilities proposed by the Infinite switch on the Electro Harmonix 16 Second Delay, it wasn’t until Oberheim released the Echoplex in 1994 that there was a device with which you could loop and layer performances, and play along in real time. Things didn’t really go mass-market however, until companies such as Roland and Digitech got into the game.

Looping appeals to artists of every persuasion – so it can enhance the conventional framework of a singer/songwriter/guitar player such as Ed Sheerhan, or alternatively, contribute to Nel’s Clein’s sonic mayhem. Trumpet players, beatbox poets and sound artists – they all love loopers. 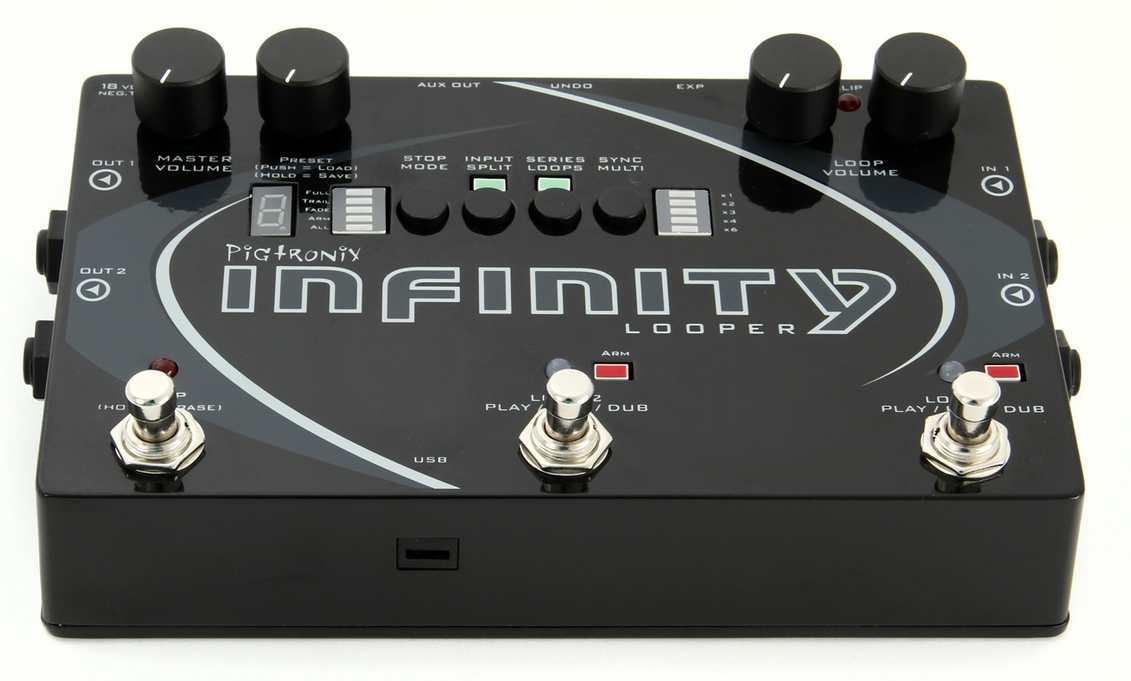 Phrase recorders have been steadily developing in terms of sound quality, storage time and feature. The Pigtronix Infinity Looper delivers 48kHz/24-bit sound quality and it can record two loops that can work in series or parallel. It can function as both a mono and stereo input/output device. Loops can be summed at the output or split to separate outs. You can overdub as much as you like, and there’s an undo/redo function.

Dual loop information can be stored to 50 preset locations. The Infinity contains an 8Gb micro SD card, which delivers around two hours recording time. And it’s mounted internally and not designed to be changed; data can be moved to and from the pedal via USB using the Infinity Looper Application.

The Infinity’s well laid out: everything’s clearly labelled and the top panel’s not cluttered. It’s a good-sized unit that can easily be incorporated into a pedal board – unlike the Boomerang III or Boss RC-300, for example, which are essentially standalone solutions. Many of the controls are multifunction, so time spent with the manual will pay dividends. In terms of basic functions it’s very easy to get the hang of. Master volume and loop level are controlled by physical knobs, which instantly gives you a degree of intuitive control. The unit powers up with Loop 1 armed so you can start recording straight away when you touch the appropriate foot switch.

Pressing it again initiates playback. Press it again during playback and you’re into Overdub mode. Now’s a good time to save, so select a preset location, and press and hold the knob until the display blinks. Loop 2 can now be recorded in the same fashion: however this needs to be armed manually, so press the Tromp switch twice to start recording. There are red, green and orange LEDs for the different play, record and overdub modes. If you want to create different versions of your dual loop, performance presets can be copied to another location and subsequently modified.

In Use Tip
Now we live in a digital era it’s easy to forget that analogue transfers offer a particular sort of focussed immediacy that encourages listening in real-time. So if you’re running the Infinity in step with a DAW, and monitoring via a channel strip, printing loops you’re happy with as you go makes a lot of sense.

This Looper’s audio quality is such that you’re unlikely to notice any signal degradation. Even if you ultimately choose to do a digital transfer, the analogue loops will be there from the get-go so you can explore further processing, editing or mixing options straight away.

Alternatives
There are many digital phrase recorders on the market now, and part of the addictive appeal of looping is that they all offer a slightly different features set. If all you need is a simple, rugged mono/stereo single-loop solution capable of overdubs and you don’t need to store loops, the latest Boss RC-1 Loop Station’s a winner with an RRP of just £85.

On the other hand, an Electro Harmonix 45000 lets you record loops with four individual tracks that can be panned and mixed down, enabling you to build incredibly complex musical textures. This will set you back somewhere in the region of £350 (and for full functionality you really need the additional five-button remote). For a top-end solution that doesn’t archive loops, the esoteric Boomerang III Phrase Sampler (£408) lets you record four loops for serial, synchronised or unsynchronised parallel performance.

In Use
Depending on how you intend to use the Infinity there are a number of ways it can be incorporated. Connectivity is good, so most options are catered for. As a basic performance tool you can output to an amp, a pair of amps or a mixer: Input Spilt mode is potentially very useful in this context. You can directly connect two mono sources, such as a guitar and a microphone, to inputs 1 and 2, and Loops 1 and 2 will be isolated to the inputs.

Hence you can record discrete, but synchronised parts. Performers will also find the unit’s Series mode useful as it enables loops to play in sequence so you can build verse and chorus structures for example. Playback can be automatic, or a fade option can be selected. As well as the main outputs there’s also an auxiliary out that provides a summed mono signal – which would be useful as a loop cue for a drummer.

Rather than offering a basic metronome function, the Infinity has a MIDI input, which is far more useful. Hooking it up to a DAW is extremely easy so it integrates into a home studio setup or can be controlled by an external sequencer in the performance environment. 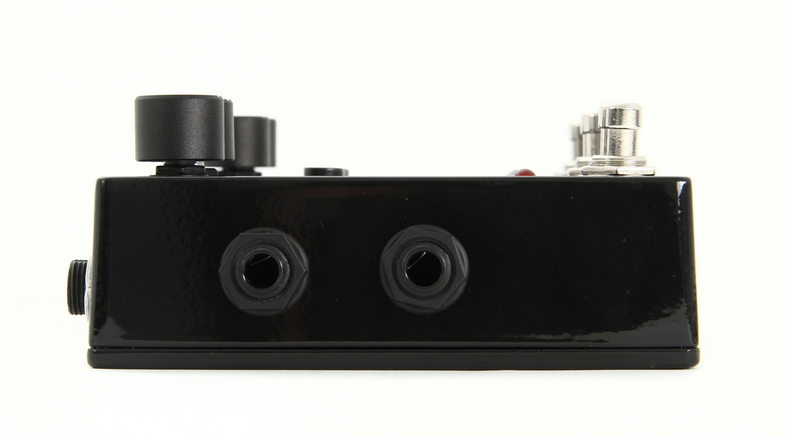 Running the unit against Pro Tools and Logic is great fun, and an external looper is great for capturing spontaneous ideas – which can subsequently be transferred to the computer. And the audio quality is such that work can be incorporated into a finished mix without fear of compromise. Many of the Infinity’s features can be directly controlled by MIDI, so automation can be used in complex performance situations.

Moving to consider deeper levels of functionality, the Infinity offers many excellent features. Sync-multi, for example, lets you link Loops 1 and 2 together – but without limiting the performance to the length of the initial loop. The second loop can be created in multiples between one and six times.

The Infinity has an expression pedal input: audio level or varispeed can be mapped to it The pedal can also be used to control Loop Aging, a feature that enables loop content to gradually fade out as new ideas come forward – so looping isn’t tied to an entirely repetitive, cyclic mode. It’s also possible to extend the unit’s functionality by connecting the dual momentary remote footswitch. This puts control of the varispeed, undo/redo, overdub and reverse functions at your feet.