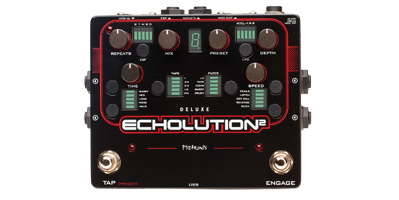 This highly-advanced delay pedal offers boundless functionality and 60 presets. Marcus Leadley explores a unit which could add time and space to your studio… 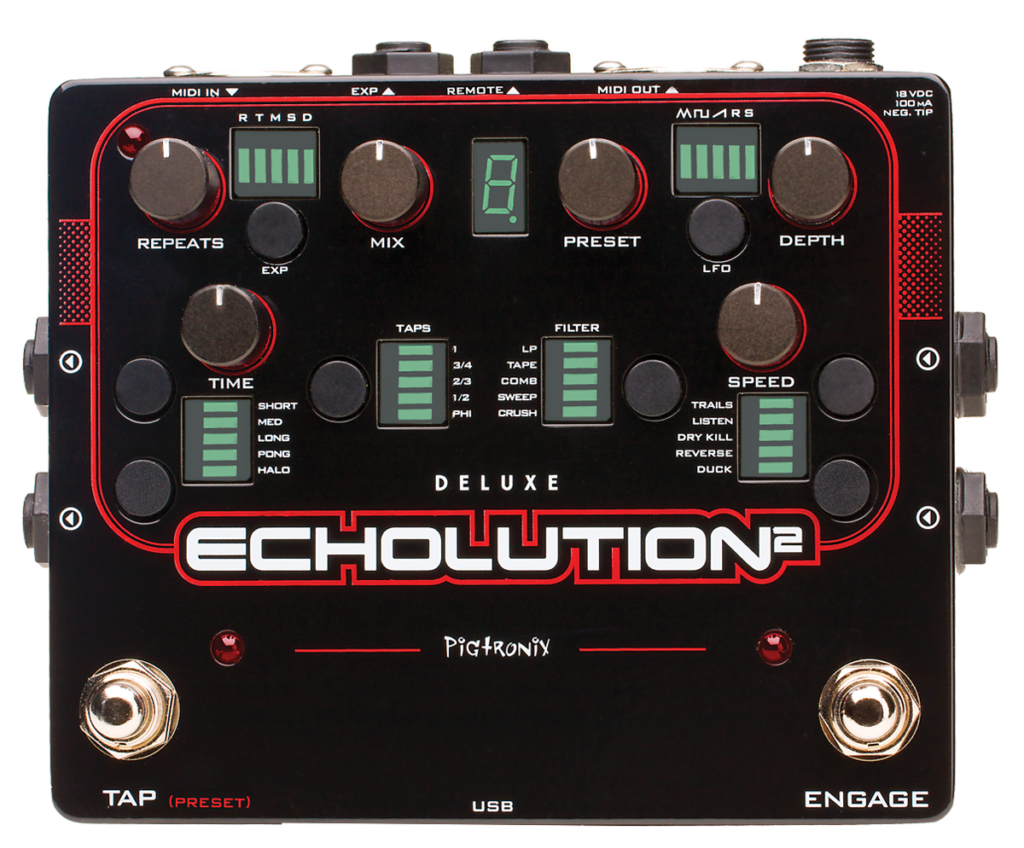 If you’re in the market for a top-end delay pedal, the Pigtronix Echolution2 Deluxe needs to be on your options list. This stereo pedal allows you to extensively manipulate and modulate echos. With six knobs, eight buttons, two footswitches, six banks of multi-segment LEDs and a preset indicator, you can manipulate every parameter from the top of the box.

At first glance, the Echolution2 Deluxe is a bit daunting. However, the controls are very well thought out. The unit’s 60 presets can all be edited and stored and the factory defaults (which can be restored by holding down both footswitches when you power up) are extremely useful as starting points for creating your own patches and for demonstrating the pedal’s potential.

Each bank of 10 presets is sensibly themed: core sounds, signature sounds, classic delays, modulation effects, special effects and multi-tap rhythms. Every function can be controlled via MIDI, and a USB port is provided so you can interface with the free Mac/PC editor software, update firmware and download new artist presets.

As cataloguing every feature of the Echolution2 would take several pages, here are the highlights. The Repeats knob takes you smoothly from single repeats all the way to wild oscillations. The Mix knob sets the volume of the echo in relation to your played part.

The Depth knob sets the intensity of the modulation. The Time knob changes the delay time manually (10ms to 10s) and tapping the Tap Tempo footswitch overrides this – so you can easily sync to BPM or other division. There’s plenty of choice when it comes to custom filters: Lowpass cuts highs to create darker tones; the Tape filter emulates the musical appeal of the vintage circuits and magnetic media and the Comb filter is designed to add motion and dimension. The Sweep filter is modulated by the LFO, and as a result, can create auto wah-style sounds.

The Crush filter (bit crusher) generated a variable effect that’s a lot like adding a distortion pedal into the chain. Both Sweep and Crush can be used alone or in combination with the other filters. Pushing the LFO button advances you through the different modulation waveform options – as indicated by the changing green LED. Each of the LFO modes can be further enhanced by a ‘super’ version of the selected waveform created by superimposing four additional phase-modulated LFOs onto the original signal.

A multi-tap feature allows you to select one or any combination of two parallel echos that can be set to musical fractions of the primary delay time. Pushing the tap button advances you through the various sub divisions, so you can create dotted eighth notes, triplets, etc.

And there’s even a setting that utilises the so-called Golden Ratio to create a musical swing based on a spiral. Pressing and holding the Tap Temp button freezes the first tap in place and allows you to place a second tap anywhere you choose. The Ping Pong function causes the echoes to bounce from left to right on each repeat.

The Reverse function is designed to generate backwards echoes. The Halo effect causes your echoes to cascade up in octaves on each repeat. This creates the impression that you’re a super-fast guitar picker with serious jazz fusion credentials! Envelope can be mapped to any parameter – so you can map it to delay time to create a flanger effect.

The jump function is something you’ll need the remote footswitch to access. When engaged, this causes the delay to jump up by octaves each time you tap the switch. Similarly, the remote gives you access to the Freeze function. This makes a loop out of the audio in the delay line and can be further altered and unfrozen at any time. 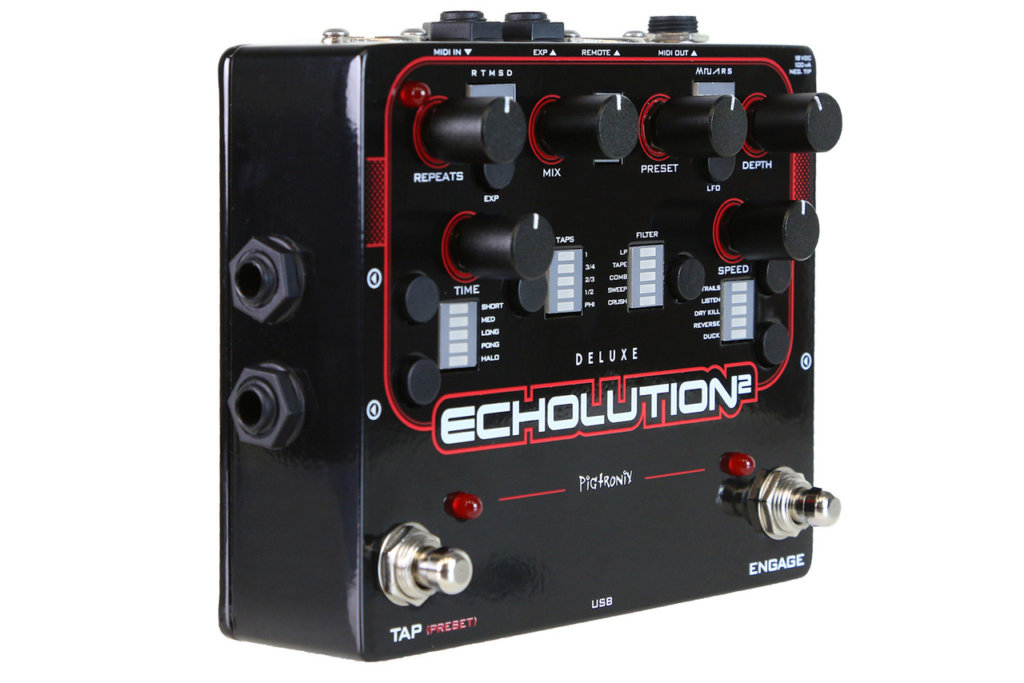 In-Use Tip
A great way to record organic-sounding delays that evolve over time is to tailor the basic patch using the onboard controls, record the part dry to your DAW and then automate the preset via MIDI when the unit’s set up as a hardware external. This allows you to massage parameters in a repeatable and creative way. Having control of Mix, Depth and Rate controls means that the delay profile can evolve over the entire duration of a track.

In Use
There are several ways to change presets: an onboard preset knob that you turn and then press, or you can engage preset select mode by holding down on the tap tempo switch.

When you arrive at the preset you want you just hit the Engage button. The Echolution Remote can also be used to toggle between the first four presets in any bank. One thing that is slightly confusing is the fact that the preset indicator goes only from 1-9, while the LFO indicator is a dual-function display that also clocks from the left, indicating the bank selection (the Echolution2 Ultra Pro, which is yet to reach these shores, adds a dual-segment display and a looper function).

While all the online videos demo the unit with electric guitar, having stereo input/output means it’s suitable for a wide range of studio applications. The extensive MIDI implementation further enhances its studio credentials.

The unit sounds great (24-bit, variable clock delay line coded to ‘behave like a futuristic tape machine’) and there are so many ways to mess with your repeats the hardest thing is to know when to stop tweaking and finally play the part 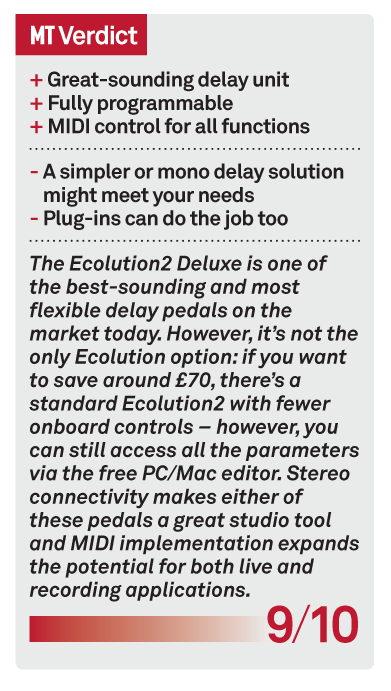