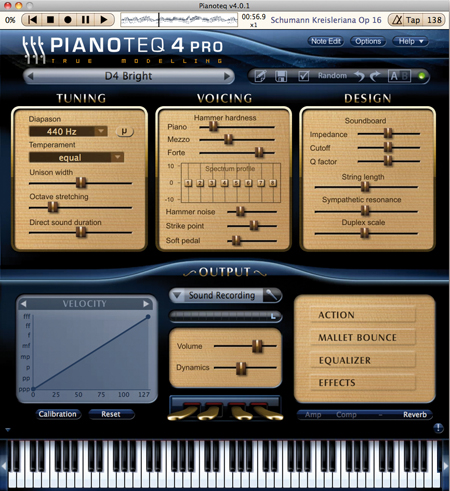 There are some excellent virtual piano plug-ins and instruments around, but they almost all share one feature that can be a drawback for some users – file size. The best way to emulate a real piano with all its nuances and intricacies has historically been to use samples. As sampling technology has improved, instruments have grown in size to accommodate multi-layered, velocity-switched notes, and the results are libraries that stretch to many gigabytes. On a desktop system that’s not usually a problem, but it can be on a laptop.

Pianoteq is an alternative to such instruments: a piano emulator with a tiny footprint of just 20MB and a relatively low CPU overhead. It generates sounds by using physical modelling technology, which essentially synthesizes sound using algorithms rather than playing back snippets of recorded sound. Three versions are available: Play, Standard and Pro, each with a corresponding level of features. It works under Windows, Mac OSX and Linux in AU, VST and RTAS formats.

Pianoteq’s interface consists of a few main sections and can be dynamically sized to suit your screen. In the options menu you can set your MIDI and audio I/O as well as buffer size and MIDI mappings. Running in plug-in rather than standalone mode, some of these things are taken over by your DAW.

Your first move will probably be to load up a preset; these are grouped into three grand pianos – the D4, K1 and YC5, with the Steinway D being the newest addition to the sound set. Within each piano’s submenu is a list of further presets grouped by style, so you get classical, blues, jazz and more as well as some esoteric ‘worn-out’ or detuned presets. These are all on the whole very good indeed, sounding at least as authentic as sample-based models and sometimes better.

Each preset can be tweaked in great detail, from having its tuning altered to changing the length of the strings and the number and position of mics around the piano. This is made possible because the sound generation is based on maths, not samples. Ordinarily you might need a load more samples to deal with changing string lengths, but here, since everything is virtual, it can all be changed. This extends to more or less any characteristic you can think of. The first section is Tuning, from where you can choose tuning modes; the next is Voicing, where hammer hardness, noise and strike points can all be set.

The Design section lets you control the characteristics of the soundboard as well as string length, sympathetic resonance and Duplex scale. The soundboard section actually enables you to take the sound beyond that of a piano, and with some tweaking you can make it sound more like a gamelan or stringed instrument. The mechanics of how a piano generates sound are not immediately known to everyone, of course, and the accompanying manual explains what each of the controls does.

Pianoteq 4 has some great effects built-in. These are accessed from the base of the window and can be split off to their own section. There are three available per patch, consisting of convolution reverb, amp and compression as well as tremolo, flanger, delay and more. Each has its own control set and there are presets for each type. They add a lot to the sound, and the reverbs are particularly effective on the pianos. The overall EQ curve can be set in a window, as can mallet bounce/key action, and there’s a velocity curve window from where you can set velocity, as well as a Calibration section to configure the instrument for your own keyboard and playing style.

Pianoteq’s output can be set to various modes including Sound Recording, Mono, Stereo and Binaural, each of which gives distinctly different results. Click on the mic icon and you can move up to five mics around your virtual piano as well as change its size and lid height. Via inexpensive add-ons you can also play a range of electric pianos and chromatic percussion.

Pianoteq seems impossibly compact for such a big-sounding instrument, but it successfully brings crystal-clear piano sounds and an astonishing level of sound tweaking to more or less any system. If you don’t need the detailed note and sound-editing tools, the midrange version may be worth considering. But to get the most out of it as a sound-design tool rather than just an instrument, those tools are worth having access to. All in all, this is a remarkable instrument.

– Pro version is a little costly

A powerful and excellent piano instrument with a wealth of sound tweaking features.